Despite years of obstacles, including an earthquake, fate and determination bring two brothers together.  Among the many things they now share is a love of polocrosse. 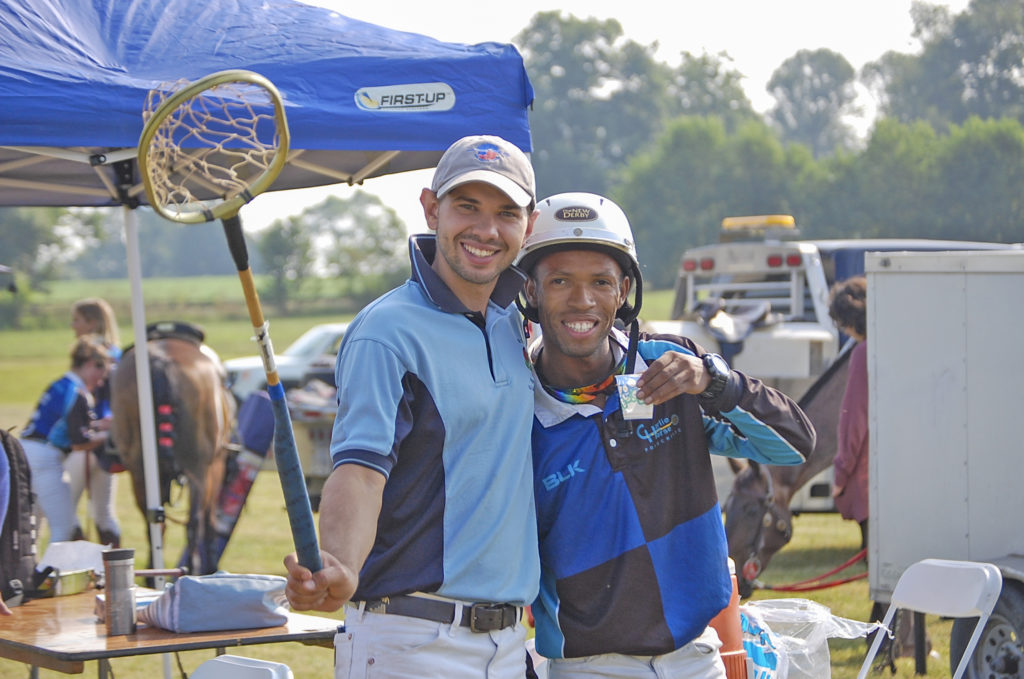 Two days after arriving from Haiti, adopted 12-year-old Joe Guzman sat on a horse for the first time in his life at Summerfield-based Charlie Horse Ranch. The latter, owned by Jamie and Deb Zito, is the home base for the Charlie Horse Polocrosse Club. Alex Guzman, also 12 at that time, but who grew up in Winter Garden, was now Joe’s younger brother by six weeks. He was already an experienced rider. The brothers may have had very different early childhoods, but they were immediately bonded by polocrosse—a combination of polo and lacrosse played on horseback.

“My parents bought me a pony when I was 8 and I started doing Pony Club competitions in equitation and dressage,” explains Alex, who reveals his early need for speed. “I liked it, but when I was 10, I was invited to a polocrosse clinic at Charlie Horse Ranch. And I fell in love with polocrosse right away. I loved how fast the game was played as opposed to the other riding I had been doing.” 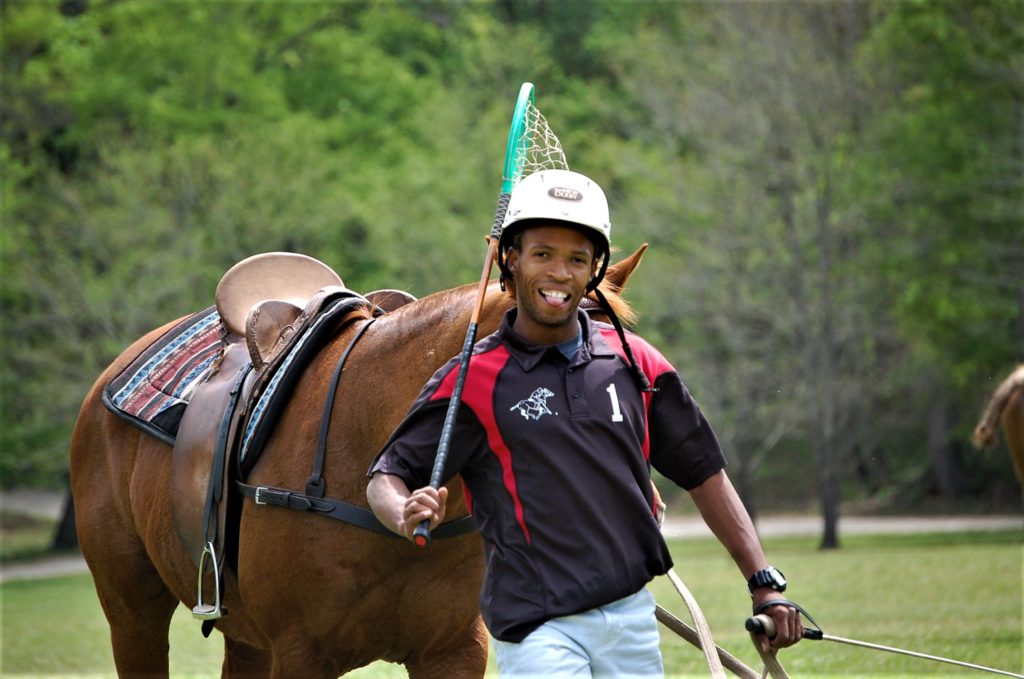 Despite having no riding experience at all, Joe’s initial reaction to being on horseback and polocrosse was a positive one.

“I really liked the feel of being on a horse,” recalls Joe, his wide, ever-present smile working its way across his face. “I watched Alex playing polocrosse that day and knew right away that I wanted to do that too.”

Today, Joe and Alex, both 24, are still playing polocrosse together. In fact, Alex is now the owner and coach of the nonprofit Charlie Horse Polocrosse Club. The Zitos, who established the club in 2002, turned it over to Alex in June 2020, but it still operates at their Charlie Horse Ranch. Jamie Zito is currently the U.S. Eastern Zone representative, ratings chair and umpire for the American Polocrosse Association (APA).

Sitting on a patio attached to the main Charlie Horse Ranch barn, Joe and Alex are a little antsy since predicted thunderstorms forced cancellation of their regular Saturday afternoon polocrosse practice. Both are athletic, polite, easygoing and very in sync. Ask a question and they look at each other, maybe communicating telepathically to make sure they agree on the answer.  This connection and that they are even together on the barn patio is a bit of a miracle.

Joe’s Journey
“I was told that my mother died shortly after I was born. But then I was told that I was adopted when I was 4 by David and Leslie Guzman. I never met them; it was all done remotely,” Joe reveals quietly, a Haitian lilt in his voice. “But I was told that my name was Joe Guzman. Then I kept being moved around from orphanage to orphanage, foster home to foster home. Some days I didn’t know if I would eat or not. I didn’t even start school until I was 11. But I never gave up hope.”

“Alex had been my miracle baby and I knew I would never be able to have another child. But we didn’t want Alex to be an only child,” explains Leslie Guzman. “My husband David knew someone who had a connection to an orphanage in Haiti. We began the paperwork when Joe was 3 and he was officially adopted at 4. But then we just couldn’t get him out. When he was 8, we lost track of him entirely for four years. It was horrible.”

The Guzmans flooded the Port-au-Prince area with missing person ads and worked with Interpol to locate Joe. And then, on January 12th, 2010, a 7.0 magnitude earthquake struck Haiti, literally rocking Joe’s already precarious world.

“I was outside when the earthquake happened, which was probably what saved me,” recalls Joe, who was 12 at the time. “It was like the world was ending.”

As horrific as the earthquake was, the Guzmans seized the opportunity of the country being flooded by the press and rescue groups, like the Red Cross. Through their network of contacts, the Guzmans made sure as many people as possible on the ground had pictures of Joe and were looking for him.

“It worked and someone recognized Joe; he was taken to a Red Cross station. We were then contacted and just elated that Joe was alive,” recalls Leslie. “We contacted a pastor we knew there and Joe was taken to an orphanage. A month later, he was on the last U.S. government plane taking refugees out of the country to Miami. When we picked up Joe at the airport, his first word to me was ‘Mom.’”

And when Joe and Alex met that day, it was also an instant connection.

“When I first met Joe, it was like we had grown up together,” says Alex, smiling. “Even though he could only speak Haitian Creole then, we really had no trouble communicating.”

Joe adds, “Yes, Alex and I were brothers immediately.”

To that point, Leslie shares a moving scene she happened to witness.

“I looked out my kitchen window one day, only days after Joe was home with us, to see the two boys going to feed our pony Sassy,” she remembers. “Each had an arm draped over the other’s shoulder, walking side by side to the paddock. And that’s been their brotherly relationship ever since.” 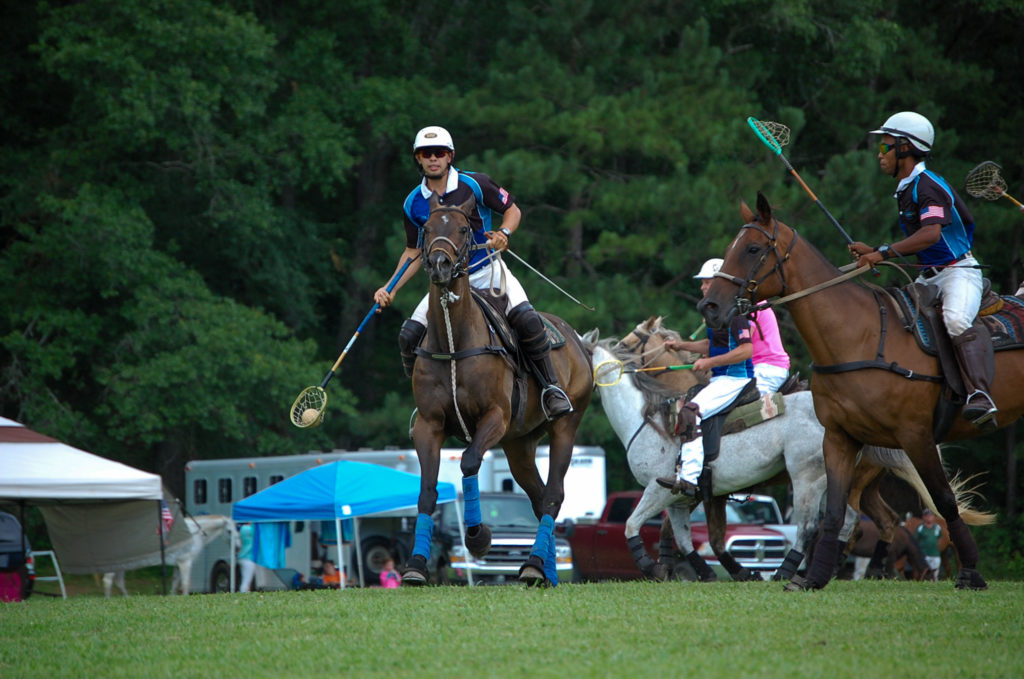 Polocrosse 101
The origins of the aptly named polocrosse, an equestrian sport that combines elements of polo and lacrosse, trace back hundreds of years to Persia. But the modern version that is played today came into being in Australia in the late 1930s. The game is played on a 160-yard long and 60-yard wide grass or dirt field. Teams are comprised of two sections with three players each. The players wear numbers denoting their position: No. 1 is the scorer; No. 2 is the midfielder; No. 3 is the goal defender. Players use a netted racket, throwing a spongy rubber 4-inch ball between the opponent’s goalpost to score. The two sections alternate players in 6- to 8-minute chukkas with four or six chukkas in a match.

Polocrosse is open to all, usually age 8 and up, of all skill levels. Clubs host or travel to weekend tournaments sanctioned by the APA. Players are rated A, B, C, D, E at every tournament to maintain an even playing field among teams. While all horse breeds are allowed as polocrosse mounts, thoroughbred and thoroughbred crosses, known for their speed and agility, tend to dominate the sport. Unlike polo, a player can use only one horse throughout a tournament. The Guzman brothers currently own four polocrosse horses, all thoroughbreds.

“We currently have 15 members on the Charlie Horse team,” says Alex, the team’s coach, who is consistently an A-rated Top 10 APA player and a past member of Team USA in polocrosse. “My best position is 1 (scorer) and then 3 (goal defender). Joe’s best position is also 1 and then 2 (midfielder).” 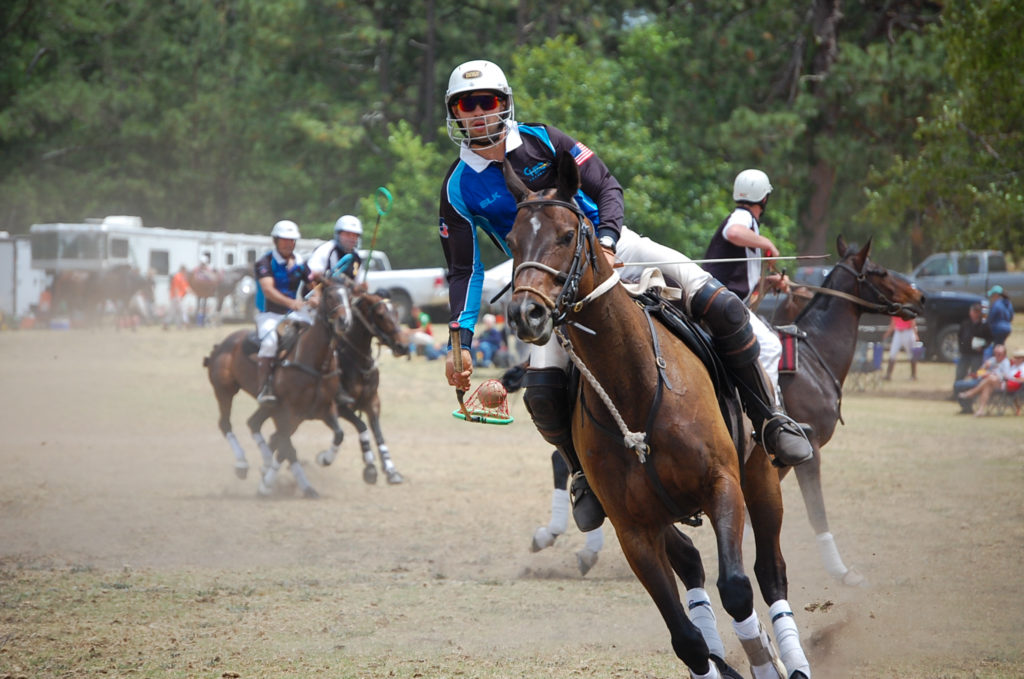 But Alex is not only an outstanding polocrosse player, he is quite an all-around athlete. He was one of the top-ranked U.S. Youth A athletes, having competed internationally for several years in the pentathlon. The pentathlon consists of fencing, swimming, show jumping and the combination of cross country running/pistol shooting. But recovering from an ankle injury and the COVID-19 pandemic led to him taking a break from pentathlon.

“When I stepped back from pentathlon, I then decided to take over ownership of Charlie Horse Polocrosse Club,” says Alex, who has to be coaxed into revealing he’s trying out for the USA Polocrosse World Cup Team.

“I’m the president and Joe is the vice president of the club. Polocrosse is something we will always enjoying doing together.”

Joe, who was also a talented track athlete in high school and is now consistently a B-rated Top 10 APA player, chimes in.

“We are both taking online college courses toward business degrees. We’re renovating a house to flip and we may turn that into a business. And we’d like to buy a farm in Ocala,” says Joe, with his big smile on display. “But polocrosse was the first thing Alex and I did together as brothers. So, oh, yes, we will always play polocrosse.”