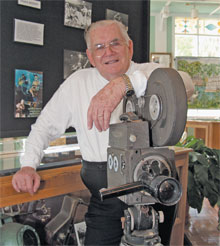 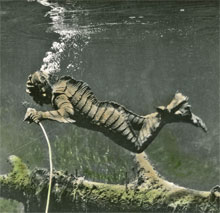 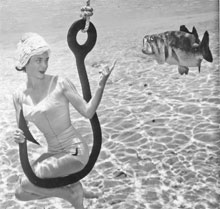 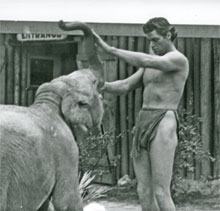 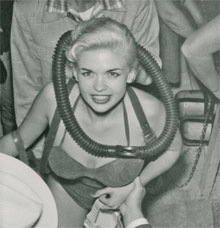 His inventions helped revolutionize underwater photography and his photos have been enjoyed by millions of people all over the world.

But Bruce Mozert is not one to brag about his accomplishments. As he looks back on his many decades of successful endeavors, it’s with a humble sense of thankfulness. “I was lucky enough to be in the right place at the right time,” he says.

Behind the simple serendipity, however, there was a man of many natural talents. His father and grandfather were both inventors, and from an early age he tinkered with mechanical things. He put together his own boat and made some good money rebuilding bicycles — enough to buy his first motorcycle.

His abilities and experiences, coupled with a strong work ethic, made it possible for him to capitalize on some remarkable opportunities throughout his life.

He was the chief photographer at Silver Springs for several decades and his imaginative pictures helped make its natural wonders and beauty known far and wide. In recent years, he has continued to seek out new creative adventures, the kind usually pursued by men half his age.

Now in his mid-80s, you would think Bruce Mozert would be ready to slow down a little bit, right?

Wrong. He says he’s not finished yet.

“I took to photography like a duck takes to water,” Bruce says.


It all began back in the ‘30s, when his well-known artist sister, Zoe Mozert, introduced him to one of her friends, Life photographer Victor DePalma. Zoe offered her brother space in her apartment for a darkroom and Victor helped him get set up. Bruce was soon making all of the photographer’s contact sheets and 8 X 10 prints for the magazine.

After a few weeks of this, Bruce decided he wanted to make pictures himself. He bought camera equipment and joined a photographer’s guild. Soon he began getting his own photo assignments for top publications, like Look, Life and Pic magazines.

He was sent on some wildly diverse assignments — from fashion shows and beauty contests to the first six-man football game. He shot the wedding of a couple who were getting married after living together for more than 40 years. (Bruce says they were soon divorced.)

Those early photo experiences, which required him to think outside the box to get the exceptional photos his agency wanted, were to stand him in good stead later when he went to work at Silver Springs.

One of his photo assignments brought him down to St. Augustine, where the state Chamber of Commerce was located. Soon after he arrived there, the Chamber folks told him about a Tarzan picture starring the great Olympic champion swimmer Johnny Weismuller that was being made at Silver Springs. They told him to go on down and make some pictures of it for them for publicity purposes.

“I arrived at Silver Springs, introduced myself to Public Relations Director Wilton Martin, and said I needed to get some publicity pictures for the chamber,” explains Bruce. “And I told him I would like to take some of them underwater.”

At that time, there were no portable underwater cameras. “When you wanted to take photos under the water, you had to crawl inside a submerged barrel that was attached to a boat and take photos through a glass window,” he remembers. Unfortunately, the one photo barrel at Silver Springs was being occupied by the movie’s cameraman and there was no room for Bruce.

With Wilton Martin’s permission, and in true Mozert style, Bruce borrowed the workshop at the springs after hours. In one evening, he built his first underwater camera case from little more than galvanized sheet metal and an old inner tube, with a couple of nails affixed to the outside to serve as a viewfinder. He made the case watertight so the camera could be safely contained within.

He says everyone laughed at what his contraption looked like, but the photos came out so well that MGM purchased them and used them in its Tarzan pictures promotions.

Bruce’s career in underwater photography had been born. So had his lifelong friendship with Carl Ray, one of the owners of Silver Springs, who greatly appreciated Bruce’s photographic talents, creativity and can-do attitude.

Bruce’s camera case invention began the liberation of underwater photography. With the portable, watertight encasements for their cameras, underwater photographers would be able to move among the actors rather than being fixed in one spot attached to a boat. It naturally made for much better pictures.

“They suggested I patent my invention,” he says, “but I couldn’t afford the $900 it would cost me to do it.”

After the Tarzan pictures, Bruce built another, more sophisticated underwater camera case that could hold both still and movie cameras interchangeably. It worked so well that he built a second identical case so two photographers could work underwater at the same time.

In later years, he also built a high-speed underwater camera. It was so fast that it needed special, extra strong lighting to work with it. In cooperation with 3M, which supplied the ingredients to make the lights waterproof, he came up with an ideal lighting apparatus that could provide the necessary candlepower.

In the early ‘40s, Bruce was inducted into the Army Air Corps as a photographer, which further expanded his professional experiences. (His adventures in the military offer enough adventures for an entire article on their own.)

About the time he received his honorable discharge from the service after three years, Bruce received a letter from Carl Ray asking him to come back to Silver Springs. He told Bruce he had always thought of him as one of his own sons.

“That letter changed my life,” says Bruce, who had been planning to accept a job at a motion picture studio.

He came back, settled into his new job as Silver Springs’ chief photographer, met and married his first wife, Elizabeth, and bought a home in the Ocala Highlands — all in fairly short order.

This was an exciting time to be at the Springs. It was fast becoming a popular location for movies and television production.

Bruce continued to invent and build underwater equipment to be able to get the photos no one else could.

He was also a movie cameraman on many productions shot at Silver Springs. He worked with quite a few of the top movie stars of the ‘40s, ‘50s and 60s. His favorite of them all was Lloyd Bridges, who filmed Sea Hunt episodes at Silver Springs in 1958 through 1961. “He was a really nice person.” He also enjoyed working with Gregory Peck and Hugh Downs. He says most of the actresses of the time, including Jane Russell and Esther Williams, could be quite temperamental, but they liked him and cooperated when he wanted to take their photos.

His work with the public relations office at the Springs called for him to constantly come up with gimmicks for imaginative photos that could be sent out on the wire services. Publications all over the world looked forward to receiving his unique pictures and published them on a regular basis. They helped spread images of Silver Spring’s beauty and unique offerings around the world, making it the Florida destination that everyone wanted to visit.

One of the accounts he worked on for Silver Springs was Mercury Outboards. He traveled extensively throughout the southeastern United States and the Caribbean, taking calendar, magazine and newspaper photos for the company “We had two to three (magazine) covers a month,” Bruce remembers.

Along the way, Bruce discovered a wonderful opportunity to make extra money at Silver Springs. He thought people would like to have a souvenir of their glass bottom boat trips, and began taking photographs of each set of passengers, developed and printed the photos and made them available to the tourists for purchase. Before long, he had his own concession, which he continued for 15 years.

“It was a real moneymaker,” Bruce remembers. “We charged a dollar a photo and I was able to pay off my new house in just a few months.”

Silver Springs suffered a devastating fire in 1955 and thousands of Bruce’s negatives and prints were destroyed, along with many of the park’s buildings, including his photo concession.

One of his favorite adventures was a trip to South America in the 1960s, with Ricou Browning and Ross Allen, the Springs’ renowned herpetologist. The story of their expedition, 2000 miles up the Amazon River, appeared on the popular Sunday afternoon program, Omnibus, on CBS.

Bruce has had many more adventures since he retired from Silver Springs in the late ‘70s.

He had been trained as an aerial photographer while in the service and right after the war he earned his pilots license. In the years since, he has owned several small planes and enthusiastically incorporated aerial photography into his photographic repertoire. He logged more than 3,600 flight hours before selling his last plane, a high-performance Cessna, a number of years back.

He had used the plane to fly to the Everglades with his photographic equipment to make a documentary film about the Seminoles. “We lived with the Indians for two years making that documentary. It turned out great,” he says.

He also made a documentary film in South America for a Swiss company, among many, many other projects.

Bruce has long been active in community organizations and efforts to help others. He has been a Lions Club member for more than 50 years and served as a Director in the Boys and Girls Club for nearly 30 years. He has been honored locally and nationally for his community volunteer work. He has also been honored professionally with a lifetime achievement award from the Florida Photographers Workshop.

He says he just wishes that other people could have had the life he’s enjoyed. He still goes to work at Mozert Studio every day, restoring old photographs and transferring still photos, slides and old movie film onto video.

Also last year, Bruce’s wife, Norma Jean, and his long-time assistant, Evelyn Yorlano, encouraged him to put all his stories together into a biography. The letter-size-page book is jammed with funny and serious stories and photographs of a life well lived.

And of course, there’s still more to come. You can be sure that retirement isn’t in Bruce’s short- or long-range plans.

“I want to keep working,” he says. “It helps keep me young.”

Claudia O’Brien has written for diverse publications for more than 25 years. She and her husband, photographer Steve Floethe, have been married “a very long time” and delight in their two grown children and three grandchildren who are “smart, good looking and way above average.” She can be reached at claudia@ocalastyle.com