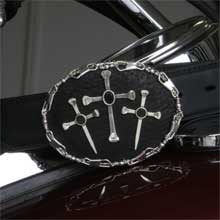 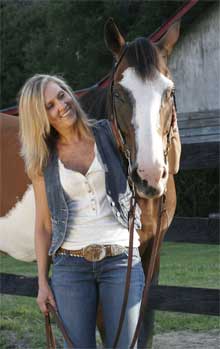 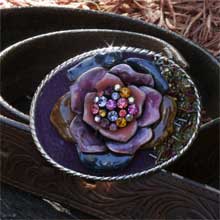 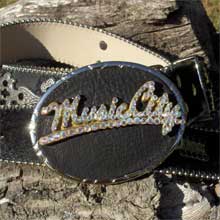 Linda Lear got the inspiration for her designer line of belt buckles, many with a Western flair, in New York City. New York City? Yep, pardner, New York City.
Although not a center for all things Western, New York City did surprisingly play host to the 2005 Country Music Awards show. Linda, a lifelong country music fan, was in the city to enjoy the festivities with friends, some of whom have ties to the industry.
“I was walking down the street, window shopping,” recalls Linda. “And in the window of this boutique, I saw this Western belt buckle on display. But it wasn’t your typical belt buckle. It was covered in faux stones, actually kind of gaudy.”

But the buckle caught her eye, especially the $800 price tag, and stayed on her mind once she was back home in Ocala.

“I was always a bit of a cowgirl growing up,” says Linda, 46, a realtor with Albiol & Associates Realty. “I played the guitar a little and I rode horses. And I loved belt buckles. I kept thinking about that belt buckle and thought it would be fun to try to make one like it.”

Linda’s father Burt also shared her passion for belt buckles and had over the years acquired quite a collection. Those would become the bases for her first creations.
“I bought some different kinds of crystals and experimented with them,” says Linda. “I had a friend who liked butterflies, so I made one with a butterfly on it for her as a gift.”

As it turned out, the friend happened to live in Nashville. She also was dating a musician, so she made the rounds of the night-time scene in Music City wearing the belt buckle. The interest was immediate. Orders for the custom belt buckles started trickling in.

“I was kind of surprised by the response,” says Linda. “But I thought it was a fun thing to do and started making a few in my spare time. It was still more like a hobby.”
That would soon change.

One day in early January 2006, Linda walked into Alei & Ani’s Shabby Shak in Ocala to do a little shopping. She was wearing one of her belt buckles.

“Ani asked me where I had bought the buckle,” she says. “There were other people in the store, so I whispered that I had made it. Right away, she asked me if I had more. I actually had eight of them in my car and she bought them all. It was my first big sale.”

Meanwhile back in Nashville, the belt buckles continued to garner new fans and customers. One of those was Howard Duck, the keyboard player for the country music group Rascal Flatts. In May, 2006, Duck wore his buckle to the Academy of Country Music Awards show after party in Las Vegas. Again, the buckle got people’s attention.

There were more orders and an invitation from a Nashville television show for Linda.

“That’s when everything really got wild,” says Linda, an athletic willowy blond. “To get ready for the show, I had to make a whole bunch of belt buckles and get a website up and running to take orders. Kenny Rothlisberger in Nashville and Heath Scott here in Ocala did a great job on the website. And Cindy Mikell worked day and night to get product and model photos taken to put up on the website. I couldn’t have done it without them.”
Linda was featured in a seven-minute segment on Nashville NBC affiliate WSMV-TV’s More @ Mid-day show last August. The website got hundreds of hits and her phone started ringing. Learway Originals, the brand name now of her handcrafted belt buckles, was no longer just a hobby.

By the end of 2006, Linda had, by her estimation, made more than 200 buckles. Among those in the country music industry who own at least one Learway buckle are Heidi Newfield, Ira Dean and Keith Burns of Trick Pony, Trisha Yearwood, Gary Allan, Jennifer Nettles and Kristian Bush of Sugarland, Danielle Peck, Megan Mullins, and Trent Tomlinson. Howard Duck wore his while performing with Rascal Flatts at the 2006 CMA show in Nashville.

Mullins in the October 9, 2006, issue of Country Weekly magazine’s Star Style section was pictured wearing a buckle. Tomlinson, sporting a buckle, is featured in the 2007 Rolling Stone “In Rock” calendar; he is the singer highlighted in the month of August.
Ocala-based champion barrel racer Lanya Kight wore several of her buckles while competing in December at the National Finals Rodeo championship in Las Vegas. In addition to Shabby Shak, the buckles are now also carried by Paddock Room Gallery in Ocala and Ivy House Restaurant & Boutique in Williston.

“I really never expected anything like this to happen at all,” says Linda. “It’s all been really amazing.”

Learway Originals is still a one-cowgirl show. Not giving up her day job of being a multimillion-dollar producer as a realtor, Linda works on her buckles at night and on weekends. Her kitchen table has been taken over by buckles, semi-precious stones, jewelry pieces, crystals, and odds and ends one wouldn’t even think could end up on a buckle. Favorite designs include crosses, horseshoes, dragonflies, skulls, horses, stars, hearts and arrowheads. And there’s even a children’s line of the buckles.
Sometimes people supply what they want on a buckle; others leave it up to Linda’s creativity. She buys some materials from wholesalers while treasure-hunting for others at boutiques, antique stores, flea markets, even garage sales. A buckle can take anywhere from two to four hours to make, depending on the design. The price range is from $110 and up.

While not sure where Learway Originals is headed, Linda in true cowgirl spirit is enjoying the ride. “It’s been a lot of fun,” she says. “I am honored that people want to wear my buckles.”