Local program helps Ocala youth make a difference… for others as well as themselves.

It’s a beautiful thing when a plan comes together. When that plan keeps coming together, year after year, you know something special’s going on.

On the national level, YouthBuild USA was incorporated in 1990 and now has 273 programs in 46 states, Washington, D.C. and the Virgin Islands. The U.S. Department of Labor is the current managing federal agency of the program, and grants are awarded on a competitive basis. Funds are distributed directly by the federal government to local community-based organizations that run YouthBuild programs in their neighborhoods. YouthBuild programs are also sponsored by local organizations, making for a unique public-private partnership.

The beauty of this partnership is that lives are changed.

Low-income young people, ages 16 to 24, participate in the program. (In our area, the ages are 18 to 21.) They learn valuable career skills in the construction field as they help build homes and also work to earn their GED or high school diploma. More than 120,000 YouthBuild students have participated in the program, building over 22,000 housing units since 1994. About 10,000 young adults take part in the program each year.

Former Ocala Police Chief Samuel Williams was the driving force for making the program a reality in Marion County. In 2009, he came up with the idea of “Phoenix Rising,” hoping to help the city rebound during the struggling economy while benefiting area youth at the same time.

When he heard that the national YouthBuild was already in existence, he knew this could be a funding source.

“The bottom was falling out of the economy, the construction business was dying and Marion County had one of the highest foreclosure rates in the state,” recalls Williams. “I wanted to come up with a project for the construction industry and felt we could do better than just telling people to ‘buy local.’”

Williams had a heart for struggling young people, as well.

“In schools, all the attention seems to go to the A and B students,” he says. “I wanted to do something for the kids who were D and F students. They’re going to be living in our community and raising families here. I don’t want it to be said that the government let them down. The idea was to teach them a trade. Building houses was on my mind at the time. I think we were way ahead of the curve. We were immediately able to do something and show people we were serious about it.”

Williams retired in 2011 but continues to keep close tabs on Phoenix Rising YouthBuild.

“We’ve done lots of programs in the past where we’ve had partners come together. The reason this one has been so phenomenally successful is because each of the partners has been very dedicated to their piece of the pie,” says Kathleen Woodring, chief operating officer for CareerSource Citrus Levy Marion.

Woodring wrote the U.S. Department of Labor grant that resulted in the award of $1.1 million last June.

“We help participants be more marketable in the labor force and also work on a career development plan for them,” she says.

Participants are between the ages of 18 and 21 and must be income-eligible. Some, but not all, are minorities. Most participants are male, but the program is aggressively working to recruit more females. 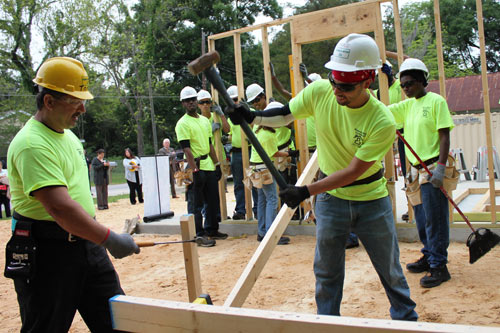 Just who are these hard-working young adults?

Some participants already have a high school diploma, but many do not, and there’s a strong focus to recruit those individuals so they can also obtain their GED. In one way or another, participants are at-risk. They may be homeless, have dropped out of high school, be pregnant or already a parent. They may have come from a broken home or been part of the foster care system. What matters now is that they want to work toward a positive future, and YouthBuild is there for them.

Because the program involves building a home, they must have an interest in construction.

In addition to on-the-job training in the construction field, participants take part in classroom training to learn and develop workforce skills. The goal is not just to work on this project but to leave the program with talents and knowledge that will help them land future employment. If they never graduated high school, there is also the opportunity to earn their GED, along with industry-recognized certifications.

Each participant receives a government stipend of $7.75 per hour. Additional bonuses and incentives are offered if they meet certain criteria, such as earning their GED within the 20-week time frame.

Career Coach Darren McGuinness is a key player in the local program and is familiar with each participant, having recruited them.

“Before a program begins, we put the word out and invite everyone who’s interested to attend ‘Mental Toughness,’ which is two weeks of unpaid activities that familiarize them with what the program is all about,” says McGuinness. “This helps us better determine their general interest, and we make our selections from those participants.” 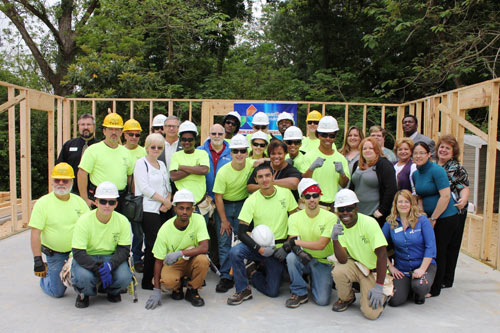 Once the 20-week program begins, McGuinness works closely with the participants. Time is evenly split between actual home construction and classroom, with three hours and 15 minutes spent on each endeavor.

“They work hand-in-hand with Community Technical Adult Education (CTAE) and have a GED instructor. They attend classes at Howard Academy, which is within walking distance of the worksite,” notes McGuinness.

“It’s a pleasure and a privilege to help them improve their lives,” notes McGuinness. “This is a great program; it’s really geared to post-secondary enrollment, either college or vocational. I work closely with employers and get them interested, so by the end of the program, I try to have kids lined up for an internship or enrollment in a post-secondary of their choice.”

The sixth YouthBuild began in March and wraps up this month. Graduation is set for August 21.

“These young folks are getting a hands-on experience,” observes Brad Nimmo, CEO and president of Habitat for Humanity of Marion County, noting that the organization has already hired one past graduate of the program to work in their Ocala Habitat ReStore.

“We started doing one build per year, but since we got the U.S. Department of Labor grant, we’ve gone to two builds per year. It’s been a great project and has won national attention,” adds Nimmo.

Phoenix Rising YouthBuild has earned recognition from the Florida League of Cities, National League of Cities and even Harvard’s School of Business. In 2013, it received Habitat for Humanity International’s highest honor, the Clarence E. Jordan Award for creativity and innovation in building homes and communities.

Not including the current build, which was still underway at press time, the local YouthBuild has a remarkable 95 percent success rate, with 69 of 73 participates graduating from the program. This success rate is based on employment offers and college enrollment.

One of those success stories is Derek Thomas, who graduated from Phoenix Rising YouthBuild this past January. Thomas, 19, was eager to find a job but had no idea what he wanted to do when he began the program.

“After we started building the house, I was running wire and putting in switches and electrical and decided I wanted to do this,” says Thomas. “Now I’m working as a helper for Mid-State Electric in Ocala, and starting in September, I’ll be going to night school at CTAE for the electrical apprenticeship program.

“I think it’s a good opportunity,” says Thomas. “I learned what I wanted to do with my life and to go for it. I think everybody took something away from it.” 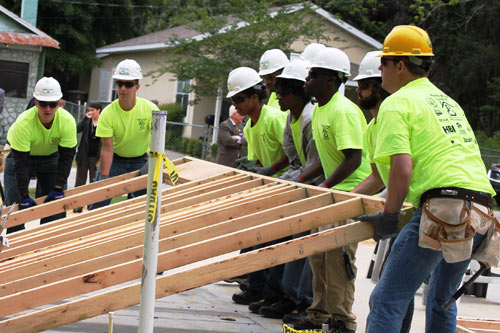 “The program is a great way to restart your life. Some of the kids, like myself, were told we’d never turn out as anything,” says Velez, 20. “This is a second chance to prove to yourself you can do it; you can finish your high school education, no matter how old you are. I dropped out of high school in 11th grade. I have a child who’s almost 2 and want to be the best role model I can for my daughter.”

For Velez, working in construction was not something she ever imagined herself doing, but she’s loving it and is proud to be earning her GED.

“My dad has been a framer for over 20 years, so I knew something about construction but not a lot,” she says. “I was not a big ‘outside’ person. I was a receptionist and a hostess, and I would never have thought I’d be able to do this. It’s so much fun to learn what it’s like to work out in the field, not just behind a desk. To build a house for somebody who needs it and actually see this house standing in front of us, it’s real!

“We’re learning the right and safe ways to do this,” says Velez, who especially enjoyed learning how to read blueprints.

Ocala Mayor Kent Guinn has been a staunch YouthBuild supporter and has attended all of the “wall raisings,” house blessings and graduation ceremonies since the local program started.

“The best part of this project is the success stories that come from taking kids that are at risk and giving them a second chance. It’s great that people are getting new homes through Habitat for Humanity, but the best part is to see the young people blossom,” says Guinn.

“Sam Williams did an awesome job coming up with this,” adds Guinn, noting that Phoenix Rising YouthBuild is a great model of what communities can accomplish when public and private entities work together.

“It’s all about the kids,” he says. “I like meeting with them and talking about where they are now and what their plans are. It’s exciting. I tell them I expect big things out of them.”