A new hotel will energize downtown and serve as a testament to one family’s love of Ocala. 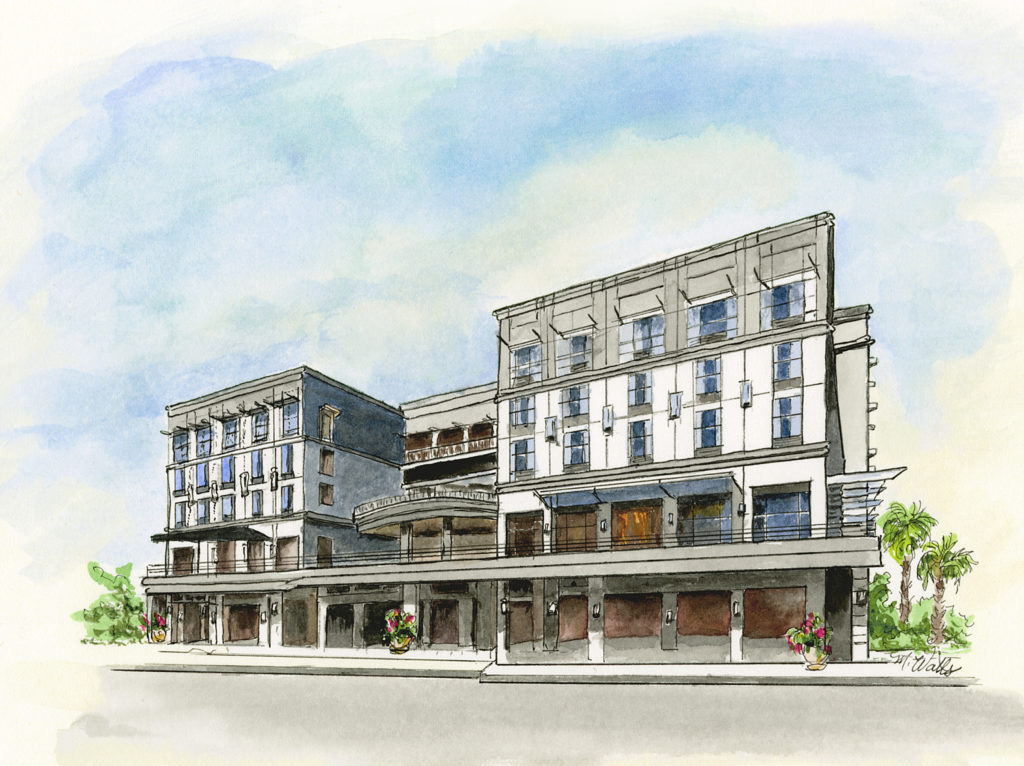 New York elegance in the form of uniformed bell staff. The convenience of valet parking for a stay or brief visit. The history of the equine industry in Marion County showcased in myriad ways. Signature cocktails and craft brews, paired with a food hall of diverse vendors.

All of that, says Karan Gaekwad, is what will make the Hilton Garden Inn Ocala Downtown something never seen before in the Horse Capital of the World.

The hotel, on the east side of the Ocala downtown square, was four years in planning and two years in construction, according to Gaekwad, vice president of Gaekwad Development & Investments.

He said the hotel was a custom build and that many elements changed as they encountered people who had great ideas beyond the initial design.

“Then you change and stop construction. Then two weeks later, you meet another person and you’re like, ‘Oh, that idea is better,’” he offers. “We thought, we have to make this perfect. It’s a community thing, not just a cookie-cutter project.”

Gaekwad notes that Hilton Worldwide has been very collaborative along the way, insisting only on signature branding in certain areas.

Some highlights of the property will include valet car service from the east and west entrances, with parking in the nearby city garage. When a hotel guest arrives, the door staff will assist them in entering at the ground level and ascending to the second-floor lobby, where they will be greeted by a massive LED screen showing a video of horses galloping.

“You can hear them breathing,” Gaekwad notes of the equines.

That level will include a breakfast area, Hilton Marketplace and the centerpiece of the hotel, an expansive indoor/outdoor bar. The outdoor seating area spans the entire length of the hotel and looks into the square. It will include a Jumbotron that can be viewed from the hotel and the square. Gaekwad says he worked with international celebrity mixologist Rob Floyd, featured on the show Bar Rescue, to create signature cocktails to enhance the upstairs “nightlife” vibe.

The ground floor, which also may be entered from the square side, will include a spacious food hall where vendors will share a commercial kitchen area but maintain separate kiosks and spaces in which to offer their wares. Gaekwad says the vendors will showcase unique menu items that will be different from others in the area. He proudly notes that he secured the services of a Heineken brew master for the craft brew bar. Portions of the food hall area will be pet friendly.

The first and second floors also will have meeting and banquet spaces, Gaekwad adds, noting that they hired a designer from Universal Studios to help refine the décor.

One of the areas of which Gaekwad is most proud is a hallway on the ground floor that connects the east and west sides of the hotel.

“As a community member, if you’re just walking on the square, you can come in this entrance, and it’s all connected to the other side. As a guest, you can come in here too. This is what I call an educational hallway,” he notes. “This will have the history of Ocala, the equine industry, and different breeds, like all their awards, history, what made Ocala today what it is.”

He says he curated the elements in the hallway, as well as those spread around the second-floor lobby and bar area, by working in concert with Louisa Barton, the director of equine engagement at the Ocala/Marion County Chamber and Economic Partnership, and with individuals with deep roots in the equine industry.

Barton says there has been an ongoing initiative to unite all equine breeds and disciplines and that the hotel has become a key part of the overall plan, which includes 50 commemorative bronze plaques and 1,200 engravable bricks in sidewalks, and more.

Among the items to be displayed at the hotel, she notes with pride, are the Preakness Stakes and Belmont Stakes trophies won during the 2019 Triple Crown races by horses trained by Ocala’s Mark Casse.

After the hotel is open, Gaekwad says his company will develop an adjacent two-story complex that will include apartments, office space and two restaurants. The idea, he notes, is to use every inch of valuable real estate on the property and also to “keep downtown alive.”

He says his family is committed to the Ocala/Marion County area and that the downtown complex will be a legacy of generations.

His father is Danny Gaekwad, who has created multiple businesses and has served in numerous public, private and nonprofit leadership roles.

“I was born and raised here. My father’s here for 30-plus years. I plan on my family being here,” Karan Gaekwad affirms. “We started a real estate development company that is doing pretty well right now. Ocala gave us everything we have so we wanted to do a project that gives the community what it’s always wanted. At the same time, we want to leave a legacy too. Kind of saying, this is the best thing we’ve ever created for the city of Ocala.”

The hotel is on land where previous hotels have stood in downtown Ocala. During construction they found a number of old red bricks from prior venues that are being saved for a special purpose.

The hotel site first was home to the Ocala House, a frame structure built in 1847. After a fire on Thanksgiving Day in 1883 destroyed that venue, along with a great many others, a new Ocala House, made of brick, rose on the site. With expansions and renovations, and being renamed Hotel Ocala, it remained there until the City of Ocala purchased it in the 1960s, after which it was demolished.

Gaekwad says he wants guests of the new hotel to not only learn about the history of the area, but also to recognize that Ocala is a beautiful and vibrant community that is growing and changing. He also wants them to feel energized as soon as they arrive at the site.

“When you pull up and are greeted by a valet, or you walk up to an entrance,” he asserts, “we want no delays. We want to put you right in the action. Boom!”