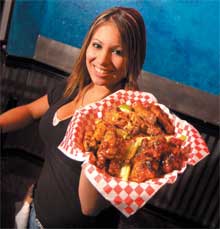 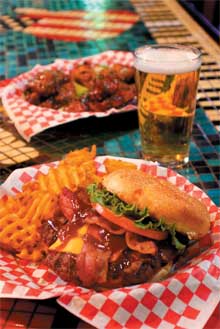 Where can I go for a good burger?” is a common question in my line of work. Without hesitation, one of the first places I mention is Rondo’s Good Time Bar and Grill. With two locations, patrons can enjoy two different menus, but the famous burgers and wings are on both.

In College Park Plaza on College Road, Rondo’s recently expanded by opening up the next unit and adding a dance floor, giving this location more of a bar atmosphere. On East Silver Springs Boulevard, the menu is the same with added entrees for more family-style dining. Both locations also offer raw bar specials daily.

Named after one of the owners, Rondo’s has earned a reputation for its thick burgers and grilled wings. But how did the grilled wing concept come about?

“We partially fry them,” Rondo answers, “and finish them off on the grill.”

The blackened grill marks on my wings attest to that, but if you want your wings fried all the way, without grilling, you can specify this to your server. Thirteen sauces are your choice, with Rondo’s Style being the most popular.

“It’s a mix of our Mojo and Chile Lime,” says Rondo. “That was actually an accident. One day I was low on Mojo, so I added in some Chile Lime. It was so good we called it Rondo’s Style and we serve more of that sauce than any of the others.”

Rondo’s sauces aren’t just hot, medium, and mild, though. He has a variety from sweet to spicy — even sweet and spicy.

“The ladies go more for the Teriyaki,” he says.

My choices on the day I visited were Blackened Garlic, Rondo’s Style, and the Jerk. By the way, mixing sauces on wings of fifteen or more is allowed.

Recently, Rondo’s won first place in the Marion County Builders’ Association “King of the Wing” contest, a tough competition, as there were other excellent local wing contenders who entered. Rondo proudly displays the huge award at the east location’s bar.

Now about those burgers.

They start out at ten ounces before grilling and wind up on the bun almost as big, a good sign that lean meat is used. When I asked which burger was the most popular, the server said the favorite was the Baby Ray with cheese, bacon, and barbecue sauce. It arrived with a huge, fresh leaf of lettuce, pickles, and the bacon criss-crossed over the melted cheese.

The burger was picture perfect. The problem was getting my jaw around it without making a mess — a juggling act, indeed, but well worth the risk of looking desperate in order to savor each bite. My choice of side was the sweet potato french fries, sliced thin and crispy unlike the bigger cuts I’ve had at other places that were too soft. Also, keep in mind that any burger on the menu can be diced up, toppings and all, and prepared quesadilla style.

And what does Rondo want people to think of his restaurants?

“When someone is dieting and they’ve met their goal,” he replies, “I want them to think of my restaurant as their reward. Instead of chocolate cake, I want them to be dreaming of my wings or burgers.”

Burger 101
How to make a Rondo’s burger at home.