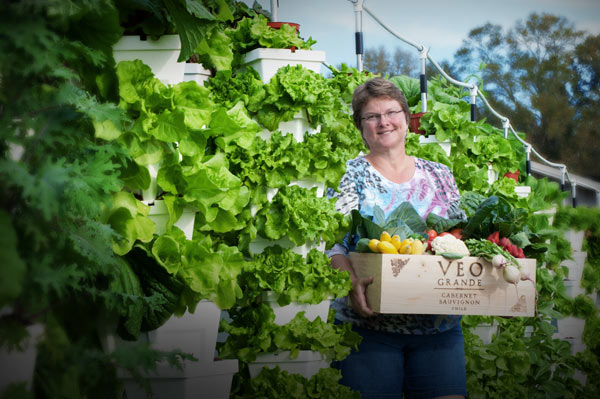 A cool sunny day found me at SugarTree Farms in northeast Ocala where Bill and Kenne (pronounced “Kenny”) Wells have turned a small plot of land into an abundant producer of vegetables, fruit and herbs. A large greenhouse enclosed by protective fabric walls shelters the plants from frosty nights, while additional rows of produce are covered as necessary.

“Precious,” the farm’s personable kitty, strolls along the weed-cloth covered paths, pausing to rub affectionately against Kenne’s leg. As she sprawls in the sunshine to groom herself, I am struck by the sight of a totally satisfied cat sitting beneath a tower of lush green strawberry plants laden with enormous scarlet berries.

“Go ahead, pick one,” Kenne urges. “Just be sure to get one that’s totally ripe.”

She doesn’t have to tell me twice; my mouth is already watering. I pluck an especially plump berry and savor the explosion of sweet strawberry-ness on my tongue. I love strawberries, but I’ve never tasted such perfect flavor.

There’s a reason for that, Kenne explains.

“Everything here is totally fresh. Nothing is picked before it’s ripe, and it hasn’t been on a truck for a week when it gets to you. We like to say it’s ‘thousands of miles fresher.’”

The farm currently has about 4,000 strawberry plants; the fruit is a customer favorite. Florida is second only to California as the country’s largest strawberry-growing area. But those luscious berries are also joined by tomatoes, peppers, broccoli, turnips, cauliflower, Swiss chard, spinach, beets, carrots, onions and more. Basil, rosemary and other herbs burst from the tiered containers, as well

SugarTree Farms utilizes hydroponics, a gardening practice that is not limited to growing in water but basically means growing without soil. Bill and Kenne use the patented Verti-Gro® system, featuring “towers” of stacked, rotating Styrofoam pots on an automated watering system. Instead of soil, plants grow in a mixture of coconut fiber and perlite.

“Soil can introduce pests, such as nematodes and fungus,” notes Kenne. “With the coconut fiber and perlite, it’s like starting with a clean slate. Plus, they are all natural and hold moisture better.”

Bill and Kenne start all plants from seeds except for strawberries. Those are shipped as young plants from Canada and are disease-resistant varieties especially created for commercial growers. 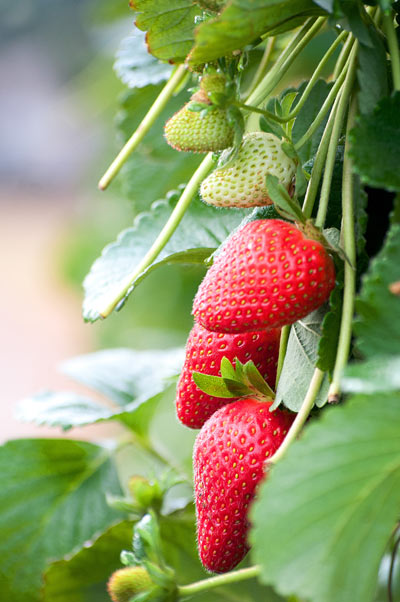 The enthusiasm of Bill and Kenne Wells is music to the ears of Tim Carpenter, inventor of the Verti-Gro® system. Growing things is nothing new to Tim, who was raised in Florida and began working in a hydroponic greenhouse in 1958 while attending high school in Tarpon Springs.

Tim learned early on that gardening is all about making the most of space, energy and water. “By doing it vertically, we did all this in one swoop,” he explains.

After operating a successful hydroponics business in Colorado for 30 years, Tim returned to Florida. In the mid-1990s, he began growing strawberries on a research basis in Plant City using his Verti-Gro® system. The unique vertical growing system was well-received; it went on the market in 1996 and has partnered with Epcot for the past 15 years.

“We branched out from there. We mostly do systems for commercial growers, but there’s also a demand by home growers for small units. We build the system to fit budget and size of operation,” says Tim, whose company now has manufacturing plants in the U.S., France, Puerto Rico and South Africa. In Florida, they’ve built systems for 25 hydroponics farmers across the state, including SugarTree Farms.

“They’re doing super in their first year of start-up,” says Tim of Bill and Kenne Wells. “Everybody wants healthy food that’s grown local and tastes good. That’s what we do.” 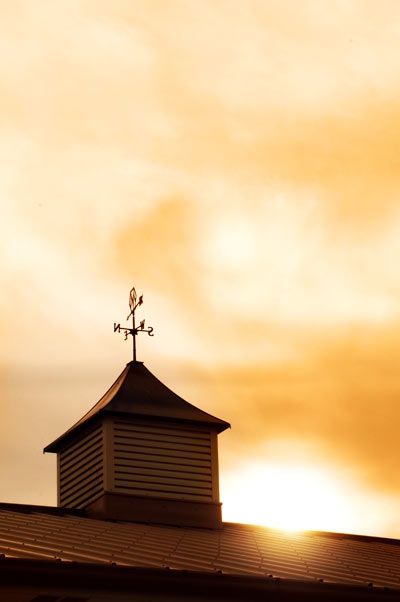 Using the Verti-Gro® system allows SugarTree Farms to produce in 1/4 acre what would require 3 to 4 acres with conventional row farming. Because the garden occupies a smaller footprint, the Wells can protect plants from cold in the winter and use shade cloth in the summer, which means they’ll have specific vegetables when other farms don’t.

Bill and Kenne launched their hydroponics farming venture last year, and the business has been growing (pun intended!) by the proverbial leaps and bounds.

“The big movement lately is ‘buy local, eat fresh.’ Once you start eating fresh produce and taste the flavors, it’s hard to go back to buying grocery store produce,” notes Kenne. “We looked at the economy and wanted something we could do with the land. We wanted to give back to the community and our neighbors and to offer something fresh and local. Not only is it fresh, but it didn’t cost fuel to get it to market.”

Bill takes some items to the farmers market in downtown Ocala each Saturday, but the bulk of their produce is sold straight off the farm, which is open to the public on Wednesday, Friday and Saturday from 10am to 5pm. Everything is harvested and neatly displayed for purchase, so you don’t need time to walk the rows or pick anything yourself. Prices vary, but tend to fall somewhere between “regular” store produce and organic.

Along with their top-selling strawberries, tomatoes are hugely popular with SugarTree Farms’ customers.

“The joke is that people are ‘addicted’ to our tomatoes. I think I’m going to have to start a group,” says Kenne with a laugh. “They just have the best flavor.”

I can testify to that. The tomatoes I took home were divine; you can practically taste the sunshine in each bite.

Before my visit to SugarTree Farms, I couldn’t have told you how brussels sprouts grew or what a broccoli plant looked like, and I sure couldn’t have identified Swiss chard. Nor did I realize that Florida strawberry plants can produce as early as October.

That all changed with one visit.

“We don’t want to just sell produce but to educate people so they can be more self-sustaining. We try to get the kids involved, too; you never know who you’ll touch and what spark you’ll get started,” says Kenne, who is happy to give advice to people who purchase their own Verti-Gro® kits.

While most people love fresh produce, not everyone wants to put forth the effort of growing their own. This is where SugarTree Farms’ “Farm to Family” program comes in handy.

I’d heard about community-supported agriculture (CSA) before but didn’t realize it was available right here in Marion County. CSA is an ideal way to keep your family in fresh, seasonal food by purchasing directly from a farm without the “middle man” of the grocery store. SugarTree Farms offers a 10-week CSA season membership for just $250. (Pay in full prior to first-week pickup and you’ll get a 10 percent discount.)

“Basically, we’re contract growing for our customers. You really become part of the farm,” Kenne explains. “Each week, we provide a box of fresh produce, enough for a family of four for one week. You just come pick it up (during farm hours) when it’s ready. If I put in something unusual, like rutabaga or turnips, I’ll include a recipe on how to use it. It encourages people to learn about different things and try them.”

Another benefit of the Farm to Family membership is that you also get a 10 percent discount if you buy something else, such as the homemade jams or relishes Kenne and Donna have cooked up.

She doesn’t want anything to go to waste. For example, if tomatoes have a nick or blemish that makes them unsuitable for selling whole, but doesn’t diminish their quality, they may be turned into preserves. Try slathering some of that onto a hunk of fresh foccacia bread and adding a thick slice of cheese… instant farm-fresh sandwich! 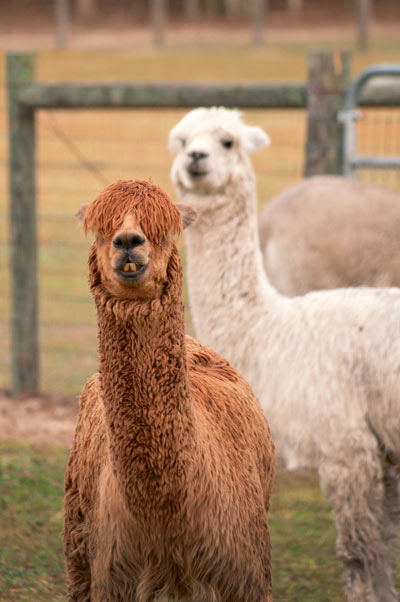 SugarTree Farms is located on the same 10 acres as Fountain Oaks Alpacas, which is owned by Donna Thurman-Maloney, who partners with Bill and Kenne in the produce venture.

The alpaca side of the business, which offers sales, breeding and boarding, is where I ended up being kissed by a baby alpaca. Some 65 alpacas—many with champion bloodlines—call the farm home, and yes, they all have names. A contented alpaca makes a soft humming sound, something I never realized until I walked through the herd.

“Alpacas are herd animals and must have a companion. They are interesting to watch, gentle, inquisitive and easy to handle,” says Donna, who appreciates the fact that alpacas offer a no-kill way to be part of the livestock industry.

Because of the shape of their two-toed feet and their light weight (adults typically weigh between 100 to 200 pounds), they are much easier on the land than horses or cattle and don’t pull up the grass roots as they forage.

Along with their hay and grain, the alpacas eat the produce scraps and trimmings, so nothing is wasted. These alpacas are show quality, but they also make excellent pets, with prices starting at $350.

Members of the camelid family (along with camels and llamas), alpacas are bred for their fiber, which is spun into yarn and used to make knitted and woven goods, such as blankets, sweaters, socks, gloves, hats, scarves and more. Naturally water repellent, alpaca fleece is warmer than sheep’s wool and doesn’t have wool’s annoying “prickly” characteristic. Because it hasno lanolin, alpaca fleece wins points with consumers who have sensitive skin.

Although there are two types of alpacas (huacava, pronounced “wa-kee-a” and suri, pronounced “sur-ee”), most of the alpacas at Fountain Oaks are suris. Huacava fiber is short, dense and “teddy bear like,” and suri fiber is luxuriously silky and clings together in “pencil-like” locks. Each alpaca produces anywhere from 5 to 15 pounds of fiber per year, and colors run the gamut, from jet black to white, silver-gray, fawn, brown and more. This provides beautiful natural colors for creating items without the use of dyes.

Visitors to the farm can find objects made from alpaca fiber offered for sale, along with the fresh produce. The farm also has chickens and sells fresh eggs.

Tempting as it was, I didn’t go home that day with an alpaca, but I did leave well-stocked with fresh veggies and those delectable strawberries.

Bill and Kenne Wells hit a homerun when they decided to launch a home-grown business that gives back to their community. They’ve also made it a lot easier (and tastier!) for people who have vowed to eat healthier this year. Tomato, anyone?