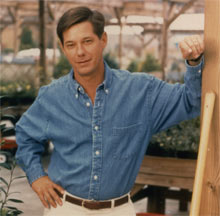 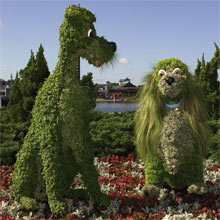 As host of the popular PBS series, The Designer’s Landscape, and as one of the featured guests at the Epcot Flower and Garden Festival, Gary Alan is well known to thousands of central Florida viewers. During a recent phone conversation, Gary revealed the humble origins of his TV show, a brief glimpse into his off-camera life, and a few of his best gardening secrets.

Tell me a little about your show.

It’s been called This Old House For Your Yard because we take a project from start to finish. We don’t always have a plan, but we consider how to add balance, color, and contrast while at the same time keeping the yard low maintenance.

How do you choose who makes it onto the show?

Actually, the people on the show are our real clients. Some people are under the misconception that we drive around and look for a random yard to dump thousands of dollars into. It would be nice to do that, but we just don’t have the budget.

How long has your show been on the air?

It started as a last-ditch effort to save my company when the economy went sour in 1990. I had had my own business for quite some time and it was either I go out and get a job or try to make something happen. I decided not to hold back any secrets and to share all my little tips. I hoped the people who might still need my help would call. It’s been good for us.

Was it hard to adjust to life in front of a camera?

I had never been on camera before, but it did get easier with time. As a matter of fact, it got so much easier that, after a while, I forgot the camera was there. As I got a better feeling for composition, I learned how to enter and leave scenes and how to hold things better for the camera. On the job, I’m the director, the producer, the designer, and the host.

I’ve noticed you’re very clean-cut on The Designer’s Landscape. How do you manage that?

People are always asking me why my tennis shoes don’t get dirty. I tell them I buy the cheap Wal-Mart shoes and that when I get them muddy, I discard them. I carry that little bit of neatness to other parts of my life, including my yard. I guess it’s a personality trait (laughs).

How far do you travel to tape your shows?

Most of our clients are here in the Jacksonville area, from St. Augustine to South Georgia. However, we’ve done shows in Illinois, South Carolina, North Carolina, Atlanta, and other places in Georgia. We pack everything up and travel when I find a client who wants me to do their whole yard.

I remember thinking after I graduated that I didn’t want an indoor job. When I found out that you could get a degree in horticulture from Florida, I set my sights on that.
After a while, I was recruited along with several others to work for Disney at their tree farm and nursery before Epcot opened. A lot of the big trees for Epcot were being brought in a year or two before the park was established. We received specimens for the different pavilions from all over the country. We helped shape, trim, and transplant some of the trees and shrubs that went into the park.

Actually, I pride myself in keeping a well-manicured yard that has a lot of color, that’s exciting, and that has curves and flow. We have sandtraps in our yard and a big pond that I dug. We live on a lake, so we cleared some of the property so we could have a front yard. I think we made four or five episodes out of my own home-landscaping job.

You said you received your degree in ornamental horticulture. What exactly is that?

It’s the study of plants and plant sciences. We study everything from propagation or growing plants to maintaining and identifying them and where they’ll do best culturally. It’s plant science, if you will.

There are such a wide variety of plants and flowers available.

Absolutely. In Florida alone, you go from zone eight or nine in Jacksonville to zone nine or 10 in Ocala, and then again to zone 10 or 11 in Miami. You have to know which plants work best in which areas.

As a landscape designer, what’s the most common question homeowners tend to ask?

Homeowners always want to know what the best kind of mulch is. I try to explain that mulch is mulch. Whether you have rock, pine bark, cypress, or even leaves from your yard, they all do the same job. Any kind of mulch maintains soil moisture around the plant, helps retard a little weed growth, and looks aesthetically pleasing. Really, it’s just a matter of preference.

What do you think is the most common landscaping mistake people make?

I wouldn’t call it a mistake so much as a design decision. Many people — commercial contractors, as well — follow the straight lines of their driveway, sidewalk, and house when planting shrubs and flowers. Curves always look more natural, plus they add flow and interest. You don’t find things in nature planted in a straight line.

What are some of your favorite plants and flowers that thrive in Florida?

I’ve gone back to some of the ones that have been around for a long time. Boxwood is tough and durable, plus they don’t grow too tall too fast, and they don’t have pest problems. The Holly family of plants is tough, too. We also use Aztec grass and African Iris as ground covers, and I use a lot of Lantana because of its flowering ability.

You’re going to be a featured guest at the Flower and Garden Festival at Epcot. What can your fans expect?

We’re going to take a front of a house and put together a landscape design from start to finish.

This question is for my editor who’s a fan of your show. How long did it take to master the shovel-popping technique you do on your shows?

(Laughs) Actually, it was an accident. We were playing around on tape one day and I tried it. I managed to do it relatively effortlessly, so we decided to put it into the show. The shovel was sitting there, so I walked up and stepped on it, popping it into my hand. At Epcot, we’ll have some shovels lying around for people to try it themselves.

What do you enjoy most about what you do?

I love to create an outdoor living space for my clients. It’s a blast to see the project go from start to finish. It’s good, healthy work.

Even in the hot Florida sun?

Working outside still beats staying in [an] air-conditioned office with no windows.

What do you like to do when you’re not landscaping?

I spend a lot of time with my family. I also try to golf once or so a week. Plus, there’s always something to do around the house.

The Epcot Flower and Garden Festival
Fridays-Sundays from Apr. 15-June 5
Gary Alan will be the featured guest May 13-15
Included in park admission, which varies
(407) W-DISNEY