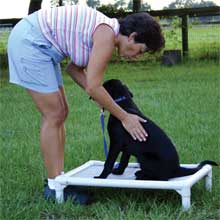 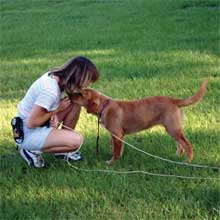 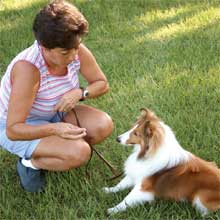 It is the first day of kindergarten. The pupils are alert, eager, and excited. The parents are proud, but anxious. The more assertive pupils run around greeting each other, while the timid ones stay close to mom’s legs or hide behind chairs. Some of the shy ones cry and some of the gregarious ones bark in glee.

Welcome to the first day of puppy kindergarten!

Lilianne Merida, owner of Trained Dog Happy Dog, says that puppy kindergarten teaches them that learning and working with their owners is fun, the highlight of their day.

“The bond that is built in kindergarten and the solid foundation of training will get the owners and the puppies through the difficult times of puppyhood,” Lilianne says.

“The main goal for the owners,” she continues, “is to understand how a puppy learns, the importance of structure to a puppy, and to see that it’s fun for them, too!”

Lilianne relates that often on the first night of class the owners are anxious for their puppies to act perfectly. What they find is a fun atmosphere where no dog is wrong. That first night they work on attention exercises and teach the puppies to respond to their names. Then they play.

The owners will leave with specific homework, and Lilianne says that if they practice with their pets, the puppies usually act differently at the second meeting.

Mary Jane Hunt has taken several of her Labrador puppies to the classes.

“The owners have more performance anxiety than the puppies,” she laughs. “Some take it hard when their puppies aren’t doing it ‘right,’ but Lilianne articulates everything so well that everyone learns quickly.”

The name of her operation succinctly states Lilianne’s philosophy on canine education — that a trained dog makes a better dog, whether a family pet, a working dog, or a show dog.

“Today’s dogs don’t have a job, and they were bred to herd, hunt, and retrieve,” says Lilianne. “Problem dogs are usually the result of people not taking the time to train them. In fact, the owners are usually the problem in the equation!”

Lilianne used to teach traditional dog obedience in her classes, where the commands of “sit,” “stay,” and “down” are emphasized to a dog on a leash. But she soon realized that this type of training was somewhat isolated because problems with dogs in real life seldom happen when on a leash. She now teaches and trains using her own method, one that she believes deals with what pet owners want from a well-behaved dog.

“Owners want solutions for real-life situations. They want a dog that won’t bolt out the door, one that is housebroken, one that will come when called, and one that can be alone in the house without destroying it,” explains Lilianne. “You have to learn to think like a dog!”

One of Lilianne’s core beliefs is that dogs are about “unconditional love” and “having fun.” She says owners often will come to her classes thinking that they have to make their dogs behave in a certain way. She agrees that dogs need to be obedient because of safety and destruction issues, but emphasizes that the owners are not in her class to “will dogs to be a certain way.”

Instead, she urges, “They are here to make the relationship work, so that both the owner and the dog get what they need.”

Lilianne feels that you almost need to use psychology to be a good dog trainer in order to figure out the underlying difficulty. Sometimes it is a mismatch of personalities. For example, if an uptight, regimented person ends up with a bounding, happy dog, there are going to be problems. Lilianne says that an agility class is good for that type of person-dog combination because it loosens up the human, gives the dog an outlet for its energy, and builds a bond between the two.

From positive experiences with her own dogs, Lilianne has become an advocate of alternative remedies like hydrotherapy. She now offers a hydrotherapy facility to clients and to referrals from local veterinarians and the veterinary school.

Kelly Culbertson, DVM, is one of several area vets who have sent clients to Lilianne’s school for hydrotherapy. He says that he often sees improvement after only two to three weeks with dogs that have had ligament surgery and have not responded to at-home physical therapy.

Lilianne explains that the low-impact movement of swimming strengthens and increases the blood supply to the injured area, which, in turn, accelerates healing. She says that even dogs that do not take to the water naturally will swim once they realize the water makes them feel good.

For the average dog owner, puppy kindergarten is the extent of the formal training that they will pursue. For those who want to continue, however, Lilianne offers an intermediate class where she perfects off-leash work and introduces agility training.

But even after the intermediate class, some owners maintain a program because of the enjoyment. Some pairs in the agility training bond to the point where the owner becomes almost telepathic to the dog’s unspoken thoughts. For the few who have a dog adept at obedience or agility, Lilianne recommends competition, quickly cautioning that it requires a huge commitment by the owner.

Puppy kindergarten, obedience, and agility classes at Trained Dog Happy Dog all run in sessions of six weeks, with a two- to three-week break in between.

“A trained dog,” Lilianne concludes, “is a happy dog!”