A new wing and dugout canoe exhibit expands the cultural and historical offerings at the Silver River Museum.

Some 6,000 years ago, when Native Americans lived along the shores of Newnans Lake east of Gainesville, they used canoes for transportation, fishing and recreation. As the vessels became worn, or developed holes in them, they were often beached on the bottom of the lake. 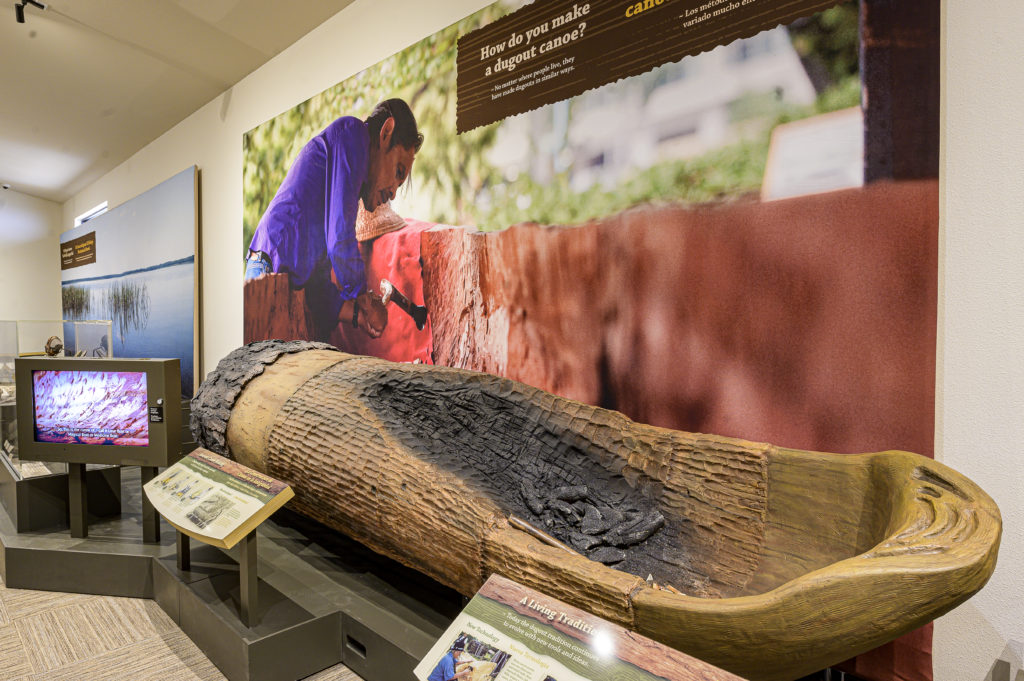 In 2000, students from Eastside High School were studying the lake bed during a drought and discovered the remains of 101 complete and partial canoes. That story is displayed in a stunning diorama as part of the new Dugout Canoes: Paddling Through the Americas  exhibit that opened recently at the Silver River Museum & Environmental Education Center inside Silver Springs State Park in Ocala.

The exhibit was produced by the Florida Museum, with support from the AEC Trust, Lastinger Family Foundation, State of Florida and Visit Gainesville. The exhibit space, a new 3,400-square-foot wing at the local museum, was made possible by a $350,000 grant from the Ocala-based Felburn Foundation.

According to Scott Mitchell, executive director of the Silver River Museum since 2004, the collection, which toured as a traveling exhibit and was rented at the price of $55,000 for a three-month period, has been exhibited at museums in Tennessee, North Carolina, Arkansas, Oklahoma and other locations for about six years. When it came off the road, a former colleague of his from the state museum at the University of Florida asked if the Ocala museum might want some of the kiosks, as they were prepared to dismantle the exhibit and put the artifacts back into their permanent collections.

“I said if I can get an exhibit space built, can I have the whole thing?” Mitchell recalls. “They loved the idea. They really didn’t want to take it apart because it is a beautiful exhibit. So fast forward…we got a grant from the Felburn Foundation for $350,000 and were able to get this designed and get the work done. The exhibit is here on a 10-year loan, basically free.” 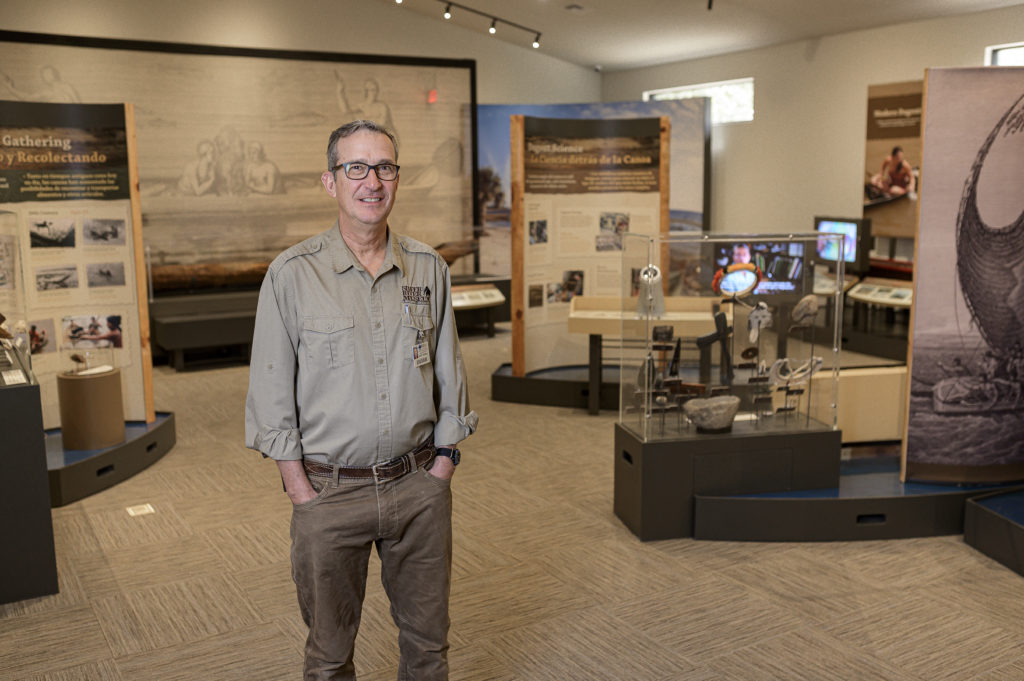 Mitchell says the exhibit is valued at $1 million. It was designed with bilingual exhibit text and kiosks and includes information about dugout canoes from North, Central and South America. There are numerous hands-on activity stations to engage young minds and hands.

“There’s a lot of interviews with Native Americans who are still making canoes and using canoes, like on the Northwest coast, British Columbia,” Mitchell points out. “There’s video of a canoe carver working.”

One kiosk features paddles displayed in a fanned-out pattern.

“I dragged the bottom one back from the Mosquito Coast of Honduras,” Mitchell notes. “I was down there on a fishing expedition in the jungle and we were camping with Indians who traveled by canoe, so I bought a couple of paddles from them. These are from the Amazon, Peru, Brazil… This could have been from a child’s canoe, or a ceremonial canoe,” he says, pointing to elaborately painted and designed pieces.

He says the overall theme of the exhibit is that people in the Americas have been using dugout canoes for many years.

“The earliest dates from Newnans Lake were 6,000 years ago and they probably were using them before that,” he offers. “That’s how you could travel. You could bring your family, a bunch of stuff, didn’t have to carry everything and tromp through the woods. You could fish.” 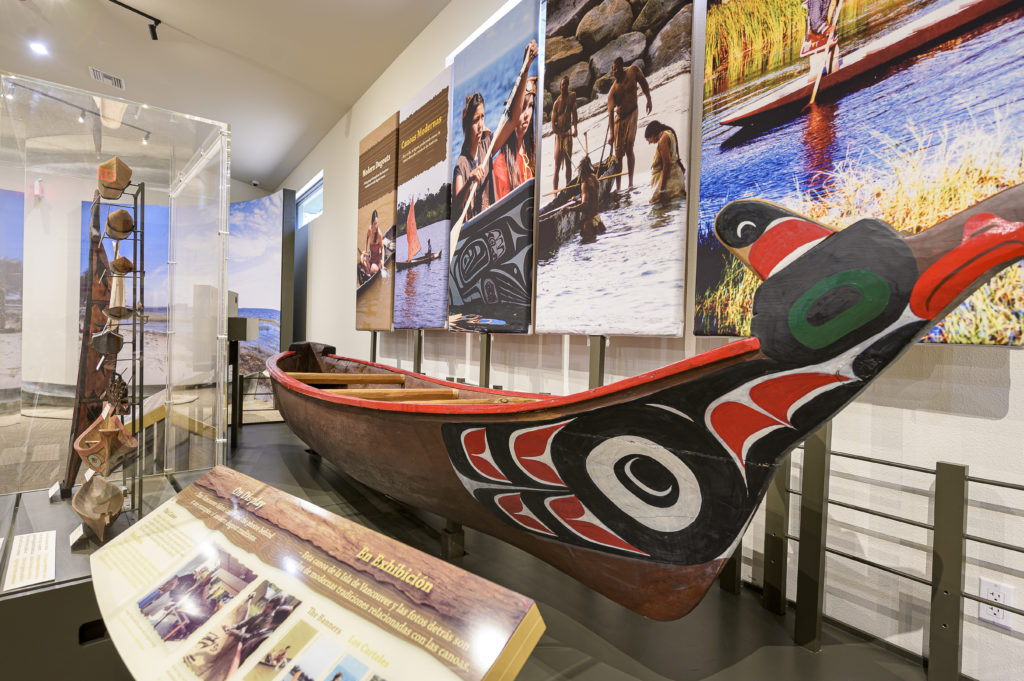 The displays include a very large brown canoe from Little Orange Lake near Hawthorne that is 1,000 years old, a “touchable station” prow fragment from a dugout from the Suwannee River, which Mitchell says is great for kids and those who are sight impaired, and a canoe from Central America that was covered in resin so kids can sit in it and have a photo taken with a vibrant backdrop of a lake on the wall behind.

The museum is operated in partnership with Marion County Public Schools. During each school year, Mondays through Fridays, fourth and fifth grade students are transported to the complex to learn about history as they view artifacts such as a mammoth skeleton, primitive tools and items of daily use. The museum is open to the public on Saturdays and Sundays, from 10am to 4pm.

Mitchell says of the new wing and exhibit, “We’re excited because it expands the museum but it also brings in local history and science and there’s a lot of really beautiful pieces. Because we see so many kids, this is a great way to introduce them to aspects of our history and some science as well.”

He says there will be an option to renew the agreement to house the collection in 10 years and that if the exhibit does move, the wing was designed to either house different exhibits or serve a multitude of uses, including as a banquet or seminar room. 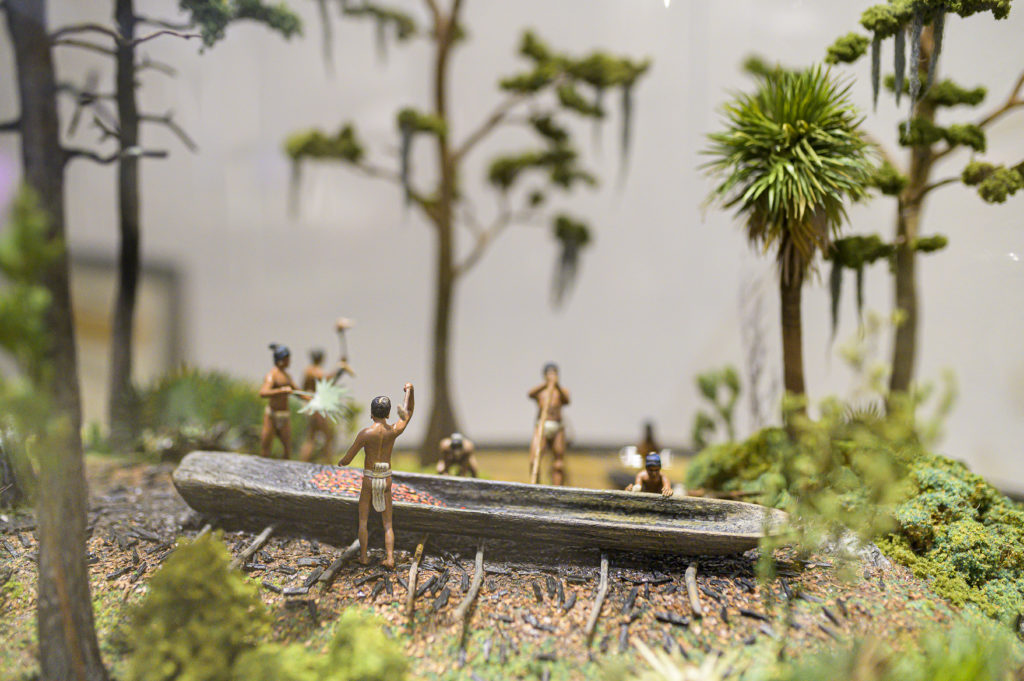 Guy Marwick, executive director of the Felburn Foundation, conceived the idea of creating the museum when he was a teacher in local schools. In 1987, he was one of two teachers nationwide to receive a Christa McAuliffe Fellowship.

“That got me started,” he explains, “then I had to raise the money to build it!”

The museum, funded by grants, appropriations and donations, opened in 1991, with Marwick as director. He retired in 2004. While with the museum, Marwick notes, he received grants from the Felburn Foundation to build a library and history wing at the venue. 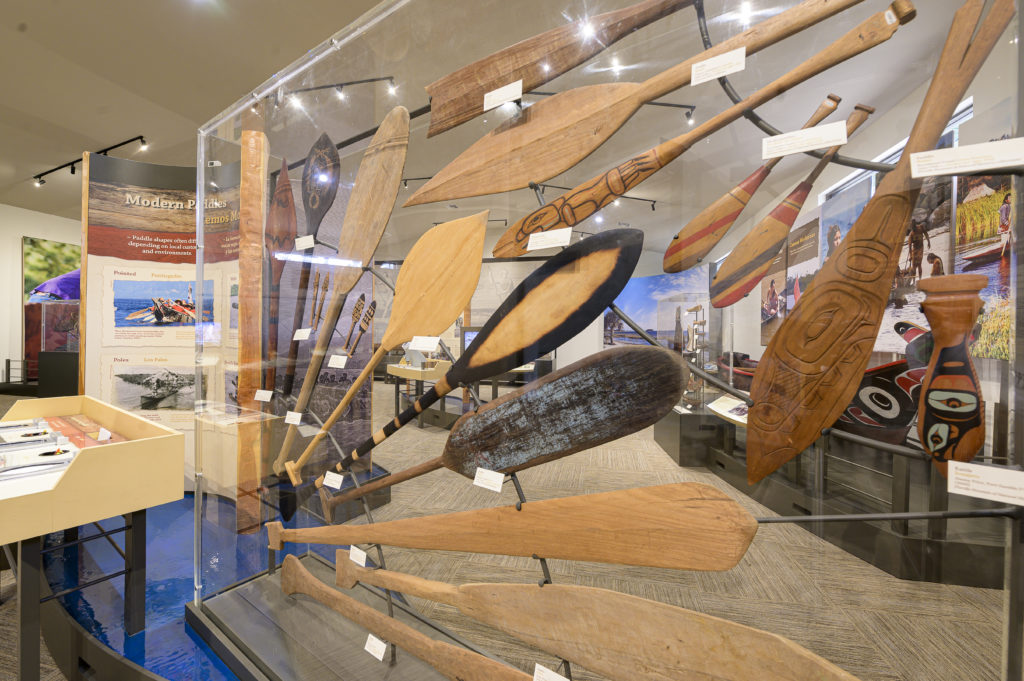 Marwick is quick to praise Mitchell for his ongoing efforts at the sprawling educational complex.

“It’s been something so successful. We want to keep it growing better and better, and continue to see it succeed,” he offers. “There is something there for everyone.”

The new wing was built by Bowden Construction Services. The general contractor, Mark Bowden, also has built log cabins at the complex, along with a unique wood-fired kiln. He says his family has deep roots in Ocala and that as a young Boy Scout he actually helped clear the property when the museum was first set for construction.

“This has been a neat personal experience for me,” Bowden states with a grin as he surveys the new exhibit inside the space he created for it. “This has been fun!”