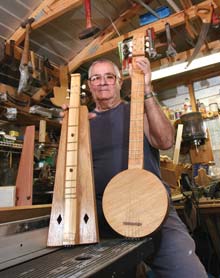 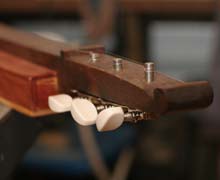 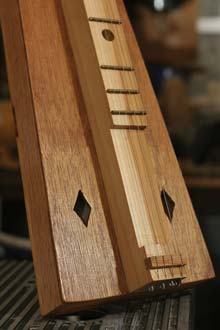 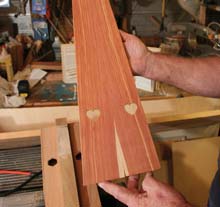 If you visit George McWhorter’s home east of Belleview, you will find yourself taking a long time to get off the front porch! That’s where George displays the variety of handcrafted items he carves. His interest in wood and carving has always been part of his life. His most recent creations are musical instruments—dulcimers, a banjo, and his own design for a violin.

George, 72, was born in Texas, and served in the active military for 14 years with tours of duty in Korea and Vietnam. His specialty was underwater demolition. He explains that his early relatives settled in the hills north of Atlanta. McWhorter, Georgia, is still shown on today’s maps even though his family left for Texas in the 1800s.

Nearing George’s front door, you’ll notice several hand-carved, all-cedar dulcimers that have a place of honor on the porch. A dulcimer is a three or sometimes four-string instrument with a long neck. It is the instrument that is often shown in paintings, circa 1700s and 1800s, being strummed by ladies. When his mother passed away in 2002, George and his sister were going through the family treasures. They found the old family Bible and when leafing through it, George found a drawing of a dulcimer. He decided right then to try his hand at making one.

“I used cedar and it turned out well. From there, I made several others,” he says. “I buy the metal frets and strings from a local music store. It’s hard to bend wood, so I soak the wood in water first. Then I bend the soaked wood over a heated coffee can.”

Some of George’s creations find homes in unusual ways.

“Recently a lady wrote to the Star Banner ‘Bulletin Board’ column in the paper that she was looking for a dulcimer for her mother, who wanted to learn how to play one,” says George. “I took a dulcimer out and visited with them to show the mother how to play it. They were such nice ladies that I left it with them as a gift.”

George often gets his wood from a sawmill near his home on Highway 301. His other wood working projects include log cabin birdhouses that have pea gravel fireplace chimneys; pyramid shaped wooden lamps; paper towel holders with kittens on them; and for his love of fishing—he makes his own fishing lures.

“I love to fish and one of the things I most enjoy is to take my canoe and go fishing on the nearby Ocklawaha River,” he says. “I love the quiet, the scenery and the chance to see the Florida so many tourists never see.”

He enjoys making his own spinner baits, and has found out that without their hooks they make great sparkling earrings. A friend of his calls them “man bait.”

George has a great interest in Native American crafts. If he sees a picture of something in a book, he can usually carve it. He has carved prayer sticks and wooden walking staffs, discovering that wild cherry with the bark skinned off makes a beautiful item. He finishes them off by wrapping them in leather, adding feathers and a small wooden turtle.

“That makes the owner a member of the Turtle Clan,” he says.

Whether it’s creating a dulcimer, making a birdhouse, or twisting wire for a fishing lure, George McWhorter’s talents bring pleasure to many others in our community.