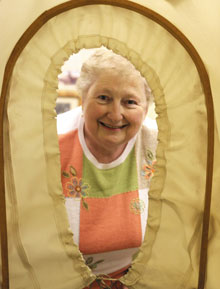 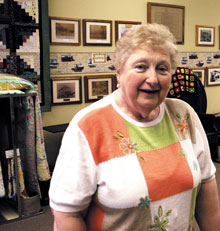 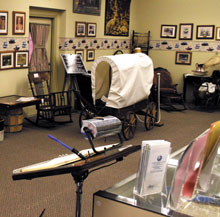 Norma Delaney, the new curator for the Lady Lake Historical Society Museum, could have retired. In fact, the former Maryland teacher and principal had.

“You’d think I’d be happy just relaxing and doing leisurely things,” she says. “But I like to be involved in something.”

Norma and her husband William traveled to Florida, where she got a job at a computer lab in Fort Lauderdale for a couple years before going back to Maryland and writing grants for the local YMCA, something she still does. Eventually, they crisscrossed the state of Florida.

“And then we decided we would look at the middle,” she says, “thinking we might be safer from hurricanes.”

Norma saw an ad in a local newspaper for a curator of the Lady Lake Historical Museum, a position which had been empty since volunteer coordinator Earl Roulette had left about three years ago. She says that if the volunteers would have been surprised at anything, it was that she had taken the job.

“My background is in education,” she says.

Volunteers kept running the museum until she was hired May 1. While that may seem like ample time to get settled, she says she’s still getting used to the position, since the job is part-time.

In the background, the hustle and bustle of volunteers can be heard leaving for the day. The offices are bright and cheerful. Loaned and donated heirlooms grace the shelves. If Norma has her way, there will be even more to plan. The museum’s grand re-opening occurred Sept. 22, and she’s kept a running to-do list of activities.

“We have worked to have some contests for the children, and we want to encourage school groups to visit,” she says. “We’d also like to get more families and individuals involved.”

Norma would like to get more people to put some of their own personal artifacts on loan in the museum for short periods of time.

First on her agenda, though, is helping the museum obtain 501(c)(3) status, which will exempt it from some federal income taxes, and make it eligible for many grants.

Next, she hopes to create a script for docents showing visitors around. One of the museum’s volunteers, historian Shirley Kimmans, walked around and was recorded explaining the various items. Norma explains it’s something “to start with,” as she works toward educating the public about the museum.

“Well, I’ve always been interested in history, interested in helping an organization get things really moving well and how to be successful in meeting its goals,” she says. “This particular museum had been sitting here after a lot of effort by the Kiwanis Club and others in the community.”

Driving through Lady Lake, the museum can’t be missed. A log cabin, which houses the Lady Lake Chamber of Commerce, stands guard in front of the renovated train depot the Kiwanis donated to the city. Train cars are off to the side. The depot used to house the city’s first library before it moved. The depot was then given to the Lady Lake Historical Society, which had occupied part of the log cabin.

“So this is a very historic building in itself,” Norma explains.

One poignant reminder of this is the two former ticket windows in Norma’s office, one used for blacks and one used for whites. A wall now divides the space, and Norma put up an interactive exhibit in the area. Various items not only recall the days of segregation but other topics, such as black Seminoles and the role of blacks in Lady Lake’s history.

One thing that isn’t as clear in the history of the town is the name itself. Norma says there are three theories.

“One is that a lady who was married to a trapper drowned herself in the lake because he went out and left her alone so much in a cabin,” she says. “The Indians found her there, and they named the lake ‘Lady of the Lake’ after her.”

Norma says the second story is similar except the woman who drowned herself is an American Indian, while the third story is that Lady Lake itself is shaped like a woman.

“Well, you know what? I started looking for it before I even talked to people, and I couldn’t find it,” she says. “I thought, ‘Is that the lake?’ No, it’s called something else.”

She learned that the lake was in a residential area just off Lady Lake Boulevard and was inaccessible due to the surrounding homes. Still, though, she says she was able to catch a glimpse through the Cathedral Arches, a line of trees planted in the 1880s and showcased in a 1929 edition of the Saturday Evening Post.

“So those are the theories that are out there,” Norma says. “I doubt we’ll ever really know. There’s not any proof as to what actually happened.”

And while some things may remain a mystery, other remnants of the past reveal the richness of the lives of past and present Lady Lake residents. And with a whole roster of future events, the Lady Lake Historical Society Museum will have quite a future if Norma Delaney has her way.