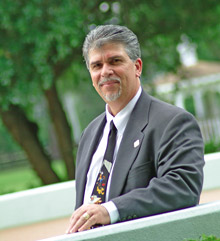 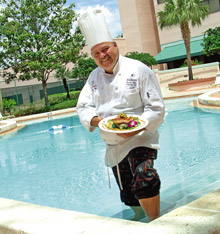 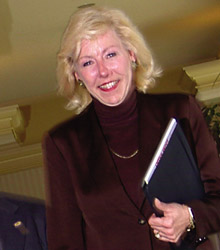 “Over the last ten years, catering has gone through something of a revolution,” explains Diane Welland on the industry website usfoodservice.com. “Today’s customers seek a ‘dining experience’ for even the smallest catered function.”

As a result, she concludes, “menus have gotten bigger, better, and more sophisticated than ever before. Many catering chefs are experimenting with a wide range of international cuisines and fusion dishes, along with a number of exotic or specialty ingredients.”

Count the Ocala Hilton among that group.

With the arrival of Charlie Dilibero, a local food industry veteran best known as the former chef and owner of Nonnie’s, and Deborah Fulgoni, an experienced professional who has worked in New York and Orlando, the Hilton has completed the last pieces of an outstanding culinary team. Pairing Charlie with Executive Chef Randal White, a consistent Taste of Ocala winner, affords clients exceptional creativity and diverse menus.

This culinary “dream team” will combine its unique skills to provide the area with options never offered before. And the trio will be attempting to break ground in the process. Emerging national trends support this goal.

“Two major trends define today’s catering clients,” says Natasha Garber in the May issue of Special Events magazine, a leading catering trade publication. “They demand food that rivals the best of international cuisine, and they yearn for the soothing flavors of home. Successful caterers are those who satisfy both cravings.”

Ocala Hilton General Manager Joe Shanks understands those needs perfectly and is excited to have three lauded professionals working together.

“Our staff will create any mood or feeling. Through our experience, we give our clients options to make their event memorable,” he says. “We’re very involved with the planning and organization — every move needs to be carefully planned and coordinated with the next.”

As for the team, Joe says they all have “great respect” for one another. “One understands what the other does so well that it makes communication easy.”

“When we book an event for a client,” Deborah says, “we’re talking to them in terms of a concept for their event. Every person has an idea in their head of what they want their event to look like. It’s our job to turn it into their vision.”

She certainly has experience in doing just that. Deborah has worked in the service industry for years, overseeing conventions and exhibitions in New York for upscale catered events of up to 5,000 guests. She has also been an executive for some of the larger hotels in Orlando near Walt Disney World and has handled regional sales throughout the country.

Her personality is already evident at the award-winning hotel.

“We go from one end of the spectrum to the other,” she explains, “from family picnics with games to white-glove dinners with ice carvings.”

She believes that the hotel is the ideal place to hold weddings, meetings, and conferences, but that off-site catering provides “a never-ending list of venues” and that “the opportunities are endless.”

Like her boss, Joe Shanks, Deborah has enjoyed working closely with the rest of the Hilton team in ensuring the success of each event. She speaks highly of her colleagues.

“Chef Randal has won I can’t tell you how many awards,” she says, “and Charlie is a creator — he can take a blank room and turn it into something spectacular.”

Charlie Dilibero is the newest member of the Ocala Hilton, having come aboard this past January. A celebrated local chef and restaurant owner, Charlie most recently revamped the catering aspect of Carmichael’s Restaurant but is probably most associated with Nonnie’s, a nondescript Italian restaurant that he turned into a perennial Taste of Ocala winner.

Having the culinary talents of two local icons in Charlie and Randal is like baseball’s Houston Astros inserting both Roger Clemens and Andy Pettitte directly into their starting rotation. It’s now a team expected to take the World Series come October. The Hilton will now face similar expectations. So far, it seems like all the excitement is really just business as usual.

“We’re the venue for the unusual and the VIP guests,” offers Charlie. “We’ve served Shania Twain and Burt Bacharach here at the hotel as well as off-site. One day we’ll serve 700 boxed lunches to a conference and the next we’ll be making a major motion picture in our restaurant like The Celestine Prophecy.” [See story on page 52.]


But it’s not just about the fanciest of meals. The Hilton can make adjustments for any tastes.

“We can serve people anywhere within a 100-mile radius of the hotel and our food ranges all the way from boxed lunches up to seven-course, five-star meals,” Charlie shares. “Part of the reason for our success is the level of service we provide to our guests and clients — no matter who they are.

“That,” he continues, “and Randal knows food from A to Z.”

Six years ago, Randal White applied for the head chef position at the Hilton. He had decades of experience but acknowledges that having the mayor’s name on his resume is probably responsible for securing the job.

“I’m good friends with E.L. Foster and I happened to bring my resume by the Hilton one day,” Randal recounts. “I put E.L. as a reference and when they called him to check me out, he just bragged about me. I credit him for getting me this position — it’s really worked out well.”

Anyone who knows Randal understands that he has a laid-back, but professional approach to what can — at times — be a very difficult position. His style is very hands-on, especially when dealing with the menu.

“I like food,” he says. “I like to make new creations and do creative things with presentation on a plate.

“I make it a point to sit down with the clients myself and find out exactly what they’re looking for when it comes to their menu,” he continues. “At the same time, I try to guide them in the right direction.”

Randal is a native Floridian and has been a chef for 20 years. He brings to the table, literally, a versatility and approach unique to central Florida restaurants and isn’t shy about experimenting with different ingredients. Like Charlie, Randal has enjoyed the accolades that come with being one of the area’s best. Randal was named “Chef of the Year” by the American Culinary Federation, a statewide organization of leading chefs. He considers the award particularly special because it is a major consideration from his peers.

Spend five minutes with Randal and you’ll quickly realize he loves his job.

“I do just about anything when it comes to catering,” he says. “An event doesn’t have to be fancy and flamboyant. It can be a luau, an old-fashioned New England clambake, or a barbecue — whatever the client wants. We like to do fancy meals, but we also like to have fun, too.”