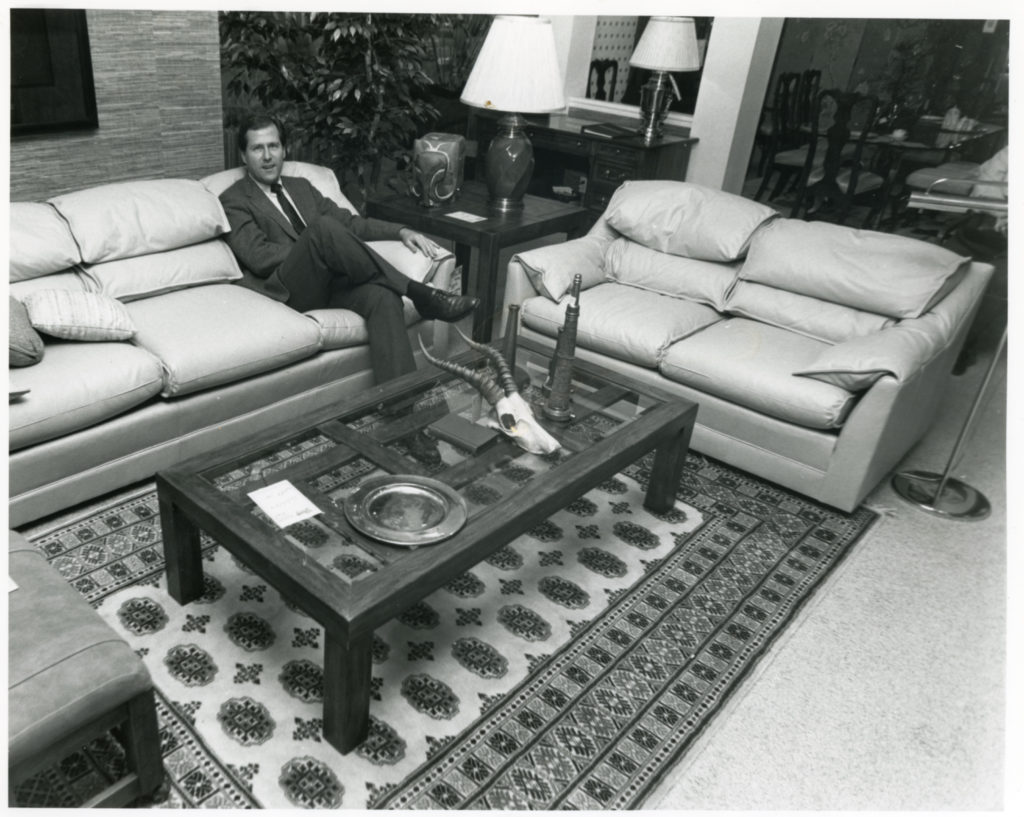 At 4 years old, when someone asked for her name, Chloe Koontz responded, “Chloe Diane Koontz Company.” Four generations of her family before her had owned and operated the business, so no one was surprised at the misunderstanding. It has always been part of the family’s identity.

The story of Koontz Furniture Co. starts many years prior to Chloe’s endearing introduction, with a man named H.D. Peebles.

In 1919, H.D. Peebles was living in Ocala when his daughter Ruth was born. At that time, he was working for two local businesses selling furniture: Theus Bros. and the George MacKay Mercantile. Both were owned and run by Ocala families who still live in the area today. 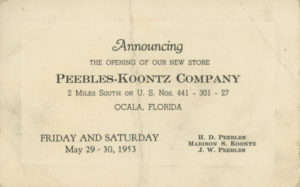 But Peebles had ambition and a plan, enough that in 1923 he and a friend, Claude Furr, opened their own store, the Eagle Furniture Co. After several years of partnership, Peebles opened his own business, the Ocala Furniture Company. 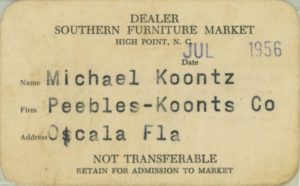 In those days, furniture wasn’t always sold in a storefront as it is today. Pickup trucks were loaded down with furniture, which was taken all over town and out into the country and sold right off the truck. Like other furniture stores at that time, Ocala Furniture Company sold all types of furniture for every room in the house, but also space heaters, linoleum flooring and washtubs—anything for the home. After a purchase off the truck, customers could choose to make weekly or monthly payments, and the store established routes that regularly took them out into the country to collect the payments in person and sell new merchandise. 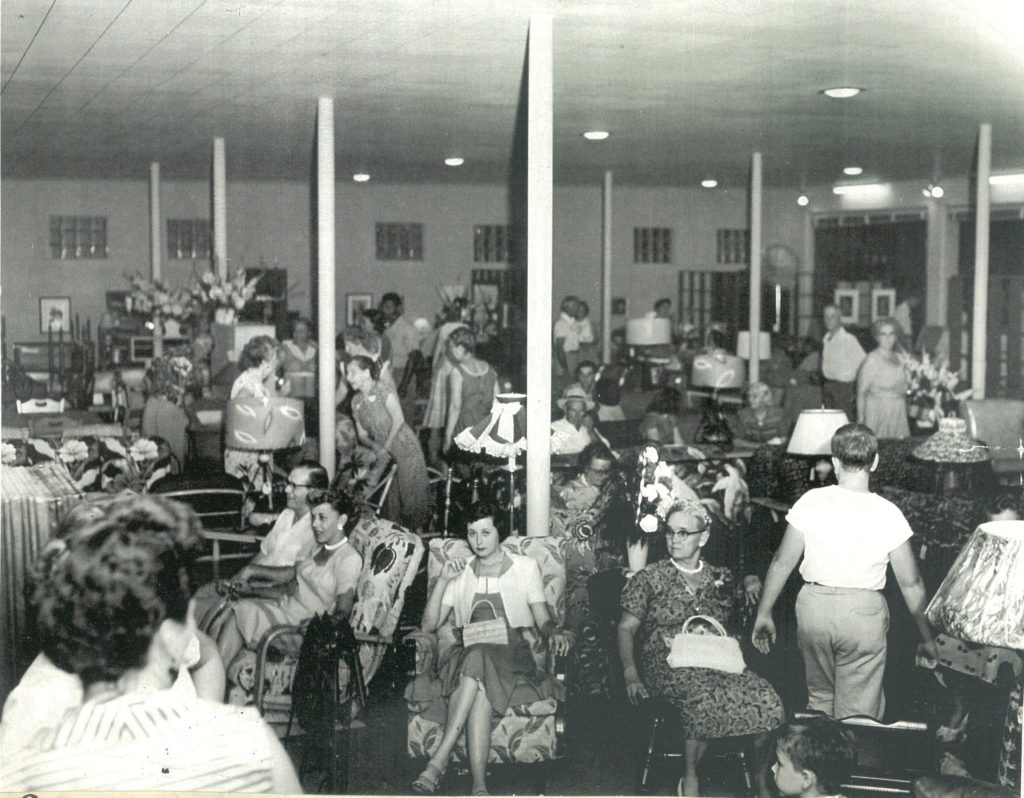 In 1953, the business was renamed Peebles-Koontz Co. Madison Koontz built a brand-new store, where Koontz Furniture Co. is still located today, just south of Downtown Ocala. The store became a regional hub for home furnishings thanks to its large display of furniture and accessories. They continued to sell heaters, flooring, appliances and furniture in every price range to meet the needs of everyone in the community.

As the store thrived in its new location, so too did the city of Ocala. When the store was built in its current location, it was set well back from a two-lane road that was the major north-south artery for Florida: U.S. Route 441. Now that road is six lanes wide, a testament to the rapid growth of the area in the last century. 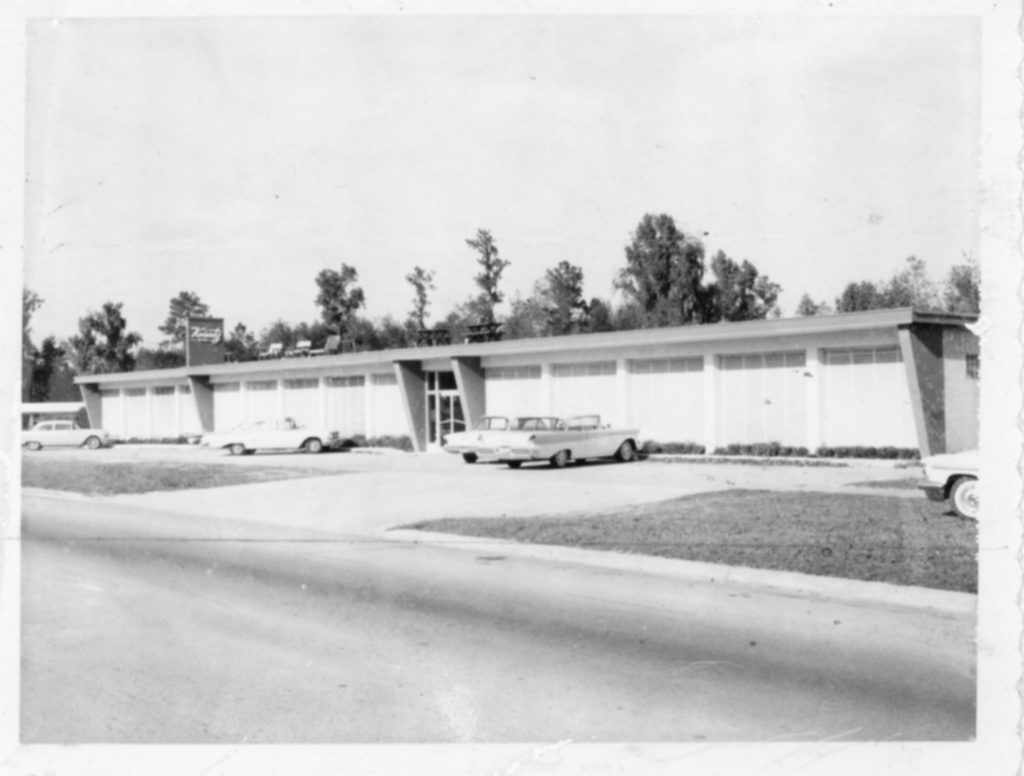 When Ruth and Madison’s son, Michael, was young, he began working summers and some days at the store along with his sisters, Sharon and Kathy Koontz. He remembers visiting the furniture industry’s annual market and showcase in Chicago with his father, Madison Koontz.

“It was all very innovative to me and I liked it very much,” he recalls. “That was when I started getting excited about it, seeing these spectacular showrooms and displays, all the new ideas and ways to do things. That turned me onto it before I started working here as a buyer myself full-time.” 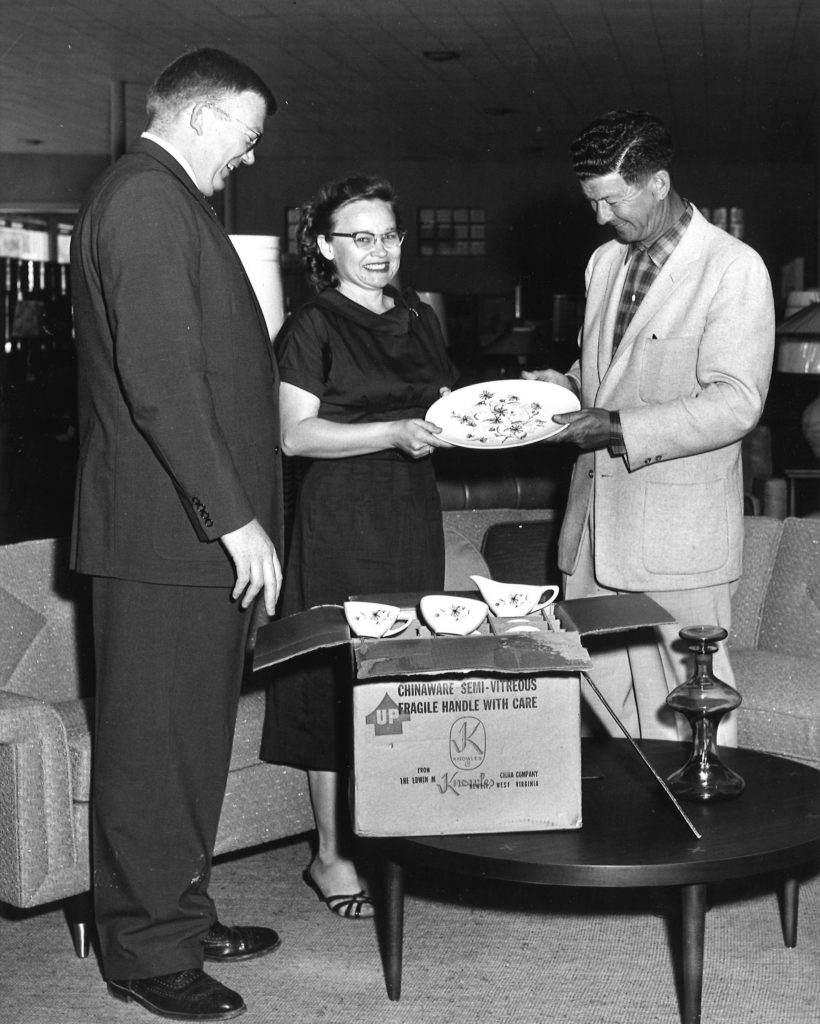 Michael attended college at the University of Florida and was most interested in finding a creative career, which is what ultimately led him back to furniture and design when he graduated in 1961.

“The decision wasn’t made until I went to college. I knew I wanted to do something creative, like become an architect or a landscape architect,” he says. “My father convinced me I should take advantage of the fact that we had a family business already, and have the same opportunity to be creative but not have to start from the ground up. It was sensible and it definitely fit into my desires for what I wanted to do.”

Kathy Koontz Snyder also joined the family business by running Florida Living, an outdoor and rattan business that was begun at a separate location, then moved to its present location.

“I’m close to my family and I like being involved with them, and I care about this business,” she says. “We’re very proud of the business and how long it’s been a part of Ocala and the community.” 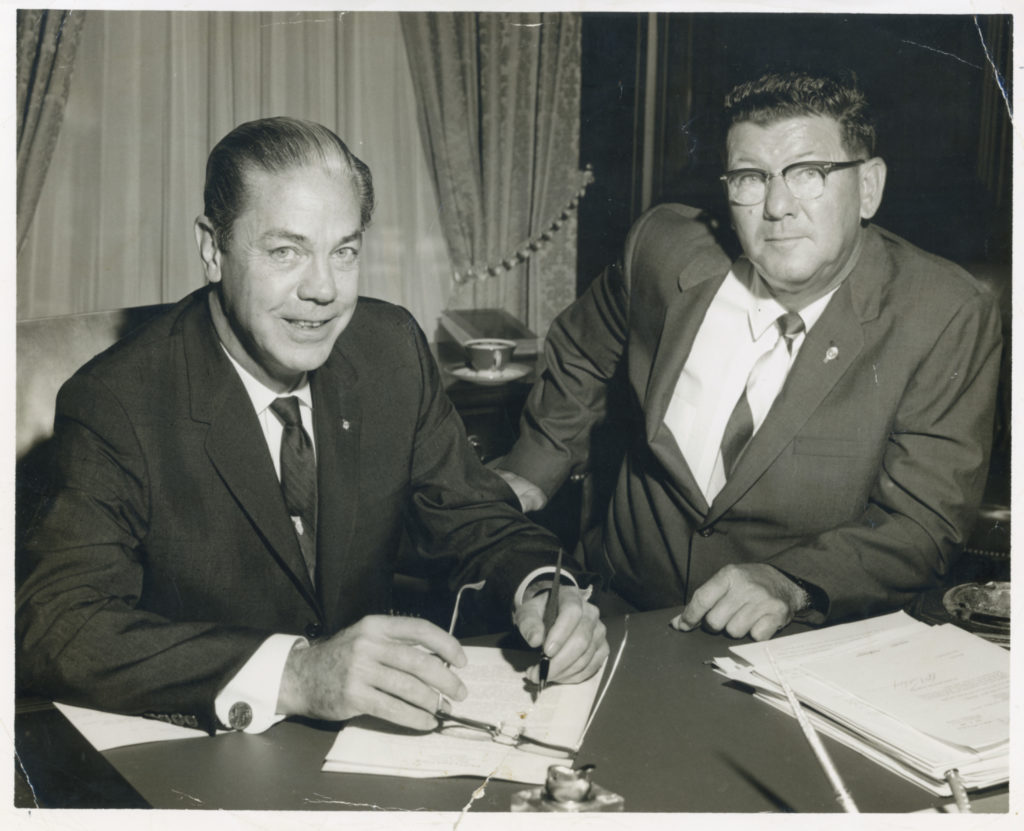 Mary Alice Adkison knows well just how much the store has grown since it first opened its doors—she celebrated 60 years of working there at the end of 2018.

“I got started on December 1, 1958,” she recalls. “I was friends with the Koontz family before that and Mr. Koontz Sr. asked me to come work for him. I started with bookkeeping and still do the financial duties.”

Over the years, Adkison and her family have grown even closer with the Koontz family.

“My husband and I were very close friends of Michael’s mother and father. They are a fabulous family to work for, and I 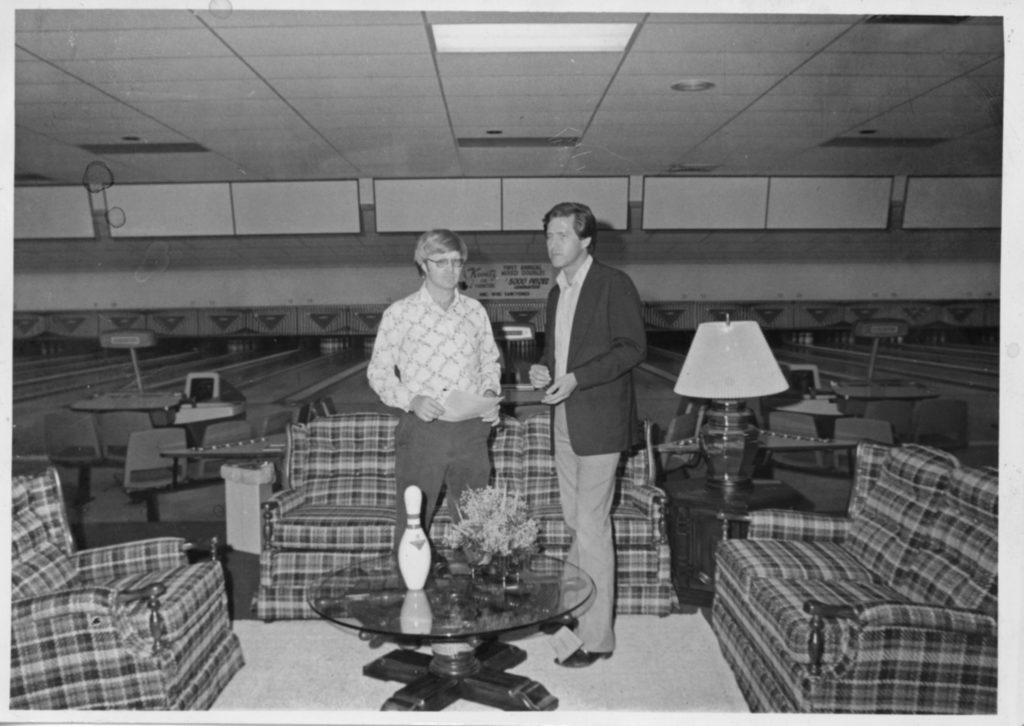 feel like they are my family. I’m on my fourth generation of them, and they’re wonderful people. I’ve raised three children while I’ve worked here. I can’t say how nice it is,” says Adkison. “They’ve all been Florida Gators and I always travelled with them to away football games. We even went to one in Chicago when the furniture market was there, and there happened to be a football game at Northwestern.”

Not only is she thankful that bookkeeping technology has evolved—from handwritten records and payment slips to computerized everything—but Adkison notes that the store has grown tremendously with the times, too. 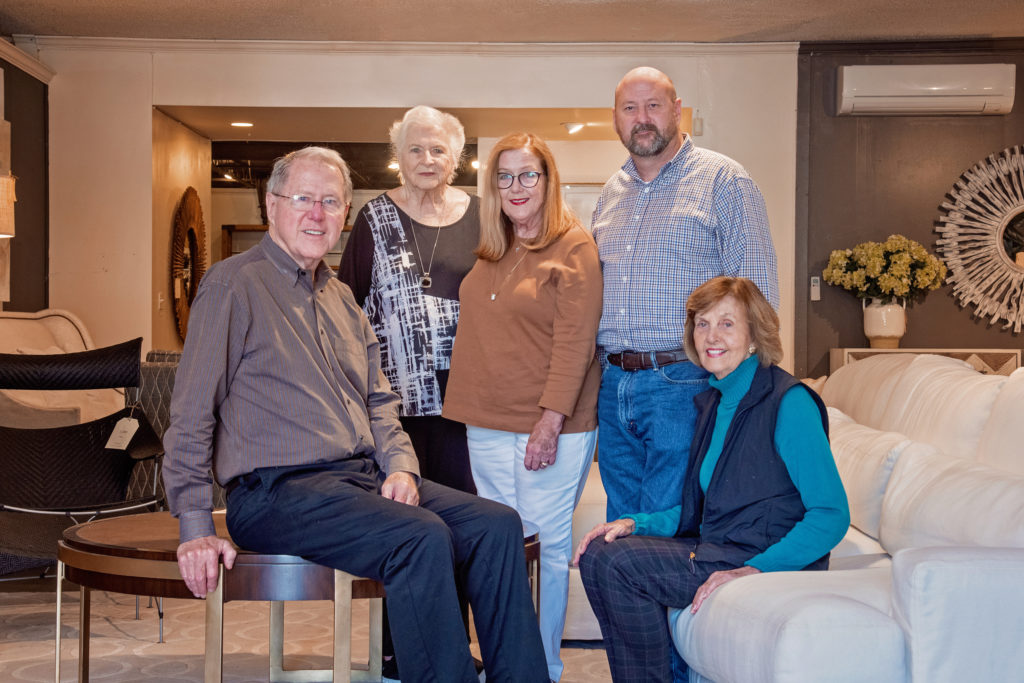 “The store has grown to be fantastic for design. When I started it was only a furniture store, but now it’s full-service from draperies to rugs to accessories,” she says.

And Koontz Furniture Co. isn’t the only mark the Koontz family has left on the Ocala community.

H.D. Peebles was an active member of the city council. His name was engraved on a marble plaque placed at the City Auditorium, now the Reilly Arts Center.

Madison Koontz worked most of his life with state and local organizations to benefit veterans. In 1963, Florida governor W. Haydon Burns appointed Madison Koontz to the Board of Veterans’ Affairs in his district of the state, where he helped make decisions in the best interest of local war veterans on an even grander scale.

Michael, along with Manal Fakhoury, founded H.U.G.S. Charities and its offshoot, Cancer Alliance of Marion County, which was begun by Linda Koontz, who’s married to Michael’s son John. H.U.G.S. is a 501(c)(3) charity working to benefit those affected by cancer, and the Cancer Alliance of Marion County brings together the best and brightest regional organizations working in the field of cancer prevention, education and treatment.

“We started H.U.G.S. here at the store, and now it helps maintain the Cancer Alliance,” says Michael. “It was a small idea that grew into something really wonderful. It has grown to what it is today with a dedicated board of directors. Its main sponsor is Robert Boissoneault Oncology Institute. It involves all the major groups and organizations working in that field.”

Diane Koontz, married to Michael, also worked in the store over the years in charge of the books for the design studio. In partnership with Altrusa International, Inc., she founded the Koontz Ladies Golf Tournament and Girls Golf Camp. Her mission was to teach girls the sport of golf because, in the beginning days of equal gender representation in sports, college golf scholarships for girls were going unused.

Today the store is run by Mak Koontz, one of Michael’s sons, whose name harkens back to his grandfather, Madison Alexander Koontz. Mak’s brother John Koontz is a residential designer, but makes time to help with in-store furniture displays. Many of the Koontz Furniture Co. team members have worked with the family for anywhere from 20 to 60 years.

“It would be impossible to name all of the wonderful people who worked with the family to the extent that they became like family,” Michael says. “Gladys Peebles Carriker and her husband Carl, Elwood Stafford, Helen Hanes, John Billings and Gene Ryals. This also goes for our current staff, Mary Alice Adkison who has been with us for 60 years, David Gadlage for 38 years, Jessica Withrow for 32 years, Jill Brown for 20 years, Phil Pederson for 19 years, and many others whom we will forever consider family.”

As a century in the home furnishings business comes to a close for the Koontz family, they also look forward to many more years of bringing special pieces and design expertise to the people of Ocala and Marion County. And just as pickup trucks full of furniture became showrooms and two-lane roads became veritable highways, Koontz Furniture Co. will continue to grow—all while preserving the passion that has kept them going for 100 years.