The philanthropy of Frank DeLuca and DeLuca Toyota has helped enhance the quality of life in Ocala and Marion County.

The definition of a philanthropist is a person who seeks to promote the welfare of others, especially by the generous donation of money to worthy causes. Frank DeLuca is a shining example of someone with a philanthropic heart and spirit.

Many know him as the president/owner of DeLuca Toyota, which has grown from a 3-acre campus with 18 employees to a sprawling 24-acre complex with 186 team members, and which soon will celebrate its 45th anniversary. He also is known as the namesake of the Frank DeLuca YMCA Family Center. In addition to these accomplishments and honors, DeLuca’s name is connected to many of the major and sustaining charitable gifts that have enhanced the quality of life for thousands of people in our community.

DeLuca, who was raised in Orlando, says his first act of charitable giving was when he was 17 years old.

“I was active in my high school Civitan Club, selling Claxton fruit cakes to raise money for local charities,” he recalls.

It was also as a teenager that DeLuca started working as a weekend auto detailer for an automobile dealership owned by the father of one of his friends. He continued to work in the business through and after his college years, excelling as a sales representative, sales manager, financial services manager and general manager.

When DeLuca came to live and work in Ocala, he brought with him a guiding principle of giving back. That principle defines the DeLuca Toyota culture and its legacy of treating customers as honored guests, many of whom are from multiple generations of devoted clients.

As a businessman, DeLuca has been a member of the National Automobile Dealers Association since 1978, past director of the Florida Automobile Dealers Association and Dealer Council representative of Southeast Toyota Distributors, Inc. He is a five-time recipient of the Toyota President’s Award from Toyota Motor Sales USA, a 2013 Time Dealer of the Year nominee and a Northwood University Dealer Education Award winner. DeLuca Toyota has received the J.D. Power Certified Retailer Award and has been voted Best New Car Dealer by the community for each of the past five years.

The dealership features a 52-bay service center, luxurious customer lounge, parts and boutique gift shop, cafe, hair and nail salon and even a rooftop putting green. He feels that the greatest quality of the DeLuca Toyota brand is the loyalty and trust that is placed in his management team and employees, many of whom have had lifelong careers there. The family environment sets a high standard of excellence, which is passed along in the customer experience. DeLuca Toyota also supports the Toyota Apprenticeship Career Training program and is committed to ongoing educational opportunities for its employees and the community.

Since 1978, DeLuca and DeLuca Toyota have provided more than $14 million of support and outreach to the local community.

“I couldn’t do what I do if it weren’t for the help of DeLuca Toyota associates and the community that has supported DeLuca Toyota since 1978,” DeLuca offers. “I want to thank our staff, loyal customers and community for the many years of support. It’s only that support that allows me to give back. Giving back—not only does it feel good, but it’s the right thing to do.”

DeLuca has served on numerous boards of directors in the community, volunteering his time in leadership roles and helping guide decisions, along with providing financial support. Among the more impactful acts of guidance and giving has been his stewardship in supporting the local YMCA.

When he was growing up in Orlando, DeLuca would often frequent the Y as a teenager. When the Y in Ocala entered a renovation phase in 2016, DeLuca served as chairman of the capital campaign and provided a lead donor gift of one million dollars. The project enlarged the facility by more than 14,000-square-feet and added new locker rooms, a lobby, a cafe and meeting rooms. The Y was renamed the Frank DeLuca YMCA Family Center. In 2017, DeLuca received the Y’s highest honor, the John Sterchi Award, which recognizes those who provide outstanding lifetime support.

But DeLuca’s leadership giving didn’t stop there. In 2021, he provided another gift of one million dollars to support a large outdoor expansion at the popular venue. The Frank DeLuca Sportsplex is a first-class athletic venue for outdoor sports that include basketball, volleyball, pickleball and soccer. In addition, DeLuca donates more than $10,000 annually to support YMCA scholarships that provide access to local families who otherwise would not be able to afford them.

Nicole Orr Bloom, who recently moved from the area, worked closely with DeLuca on both capital campaigns when she previously served as executive director at the center.

“The expansion allowed us to serve more than 4,000 people on a daily basis. With more space and a state-of-the-art facility, we were able to reach so many more people through youth sports, child development, group exercise, racquetball, swim lessons and more,” she notes. “The sportsplex has allowed the Y to further expand our reach for youth and adult sports programming. Frank DeLuca is a great example of giving back. He has created a legacy in Marion County through his philanthropy. He truly cares about his community and the people in it. As you can imagine, he is approached by so many people and organizations that are in need. He takes that very seriously and does everything he can to step up to the plate to make Ocala a better place.”

Local businessman Bill Browder, who is a board member with the YMCA, says he has known DeLuca more than 40 years.

“I can tell you that what Frank gives publicly is overshadowed by what he gives many organizations that nobody knows about,” Browder offers. “I would say he is the most philanthropic person in our community. He loves to give, and he gives so much that people don’t know anything about.” 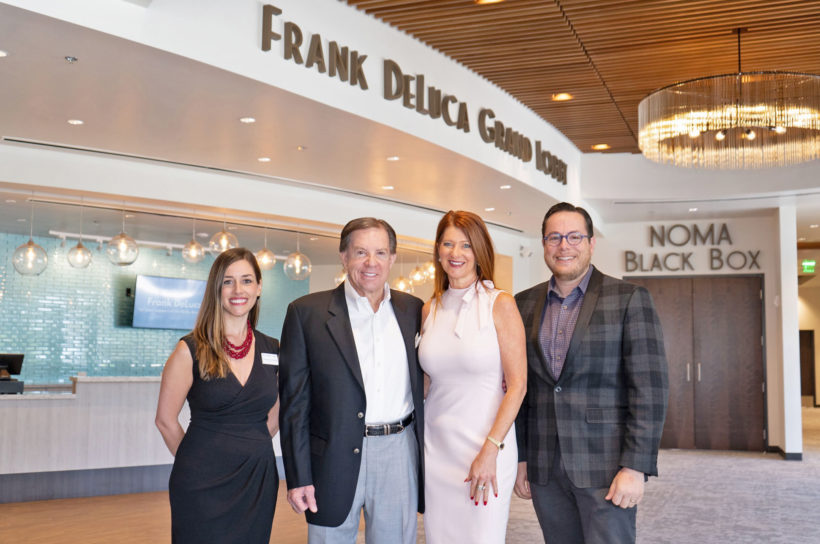 DeLuca has donated more than $73,000 to the College of Central Florida. He is a supporter of the Scholarships Taking Elementary Promising Students (STEPS) to CF program, which presents awards to promising fifth-grade students at public elementary schools in Citrus, Levy and Marion counties and the Boys & Girls Clubs of Marion County. In 2006, he made a donation to create the Carole A. DeLuca Endowed Memorial Scholarship at the College of Central Florida in memory of his late wife, Carole, who passed away that year.

The community impact goes further. DeLuca has sponsored 15 Habitat for Humanity Homes, donating over $637,000 to families and children. Every Christmas, DeLuca Toyota partners with Orlando NBC affiliate WESH2 and Second Harvest Food Bank, which raises more than 40,000 meals for children, families and seniors in Marion County. The dealership also has donated several vehicles to the Boys & Girls Clubs of Marion County and collects toys every Christmas for the organization.

One recent example of DeLuca’s commitment to his community was a $250,000 donation for an ambitious expansion of the Reilly Arts Center, which is the home of the Ocala Symphony Orchestra. The expansion included space for classrooms for the Community Music Conservatory, a black box theater and a gorgeous new lobby, which has been named the Frank DeLuca Grand Lobby.

“I support established charities and organizations that are local,” DeLuca explains. “We can’t support every charity, but we try to choose the ones that have a proven track record of making a difference that will benefit our local community.”

As a longtime Rotarian, DeLuca has received the Rotary Service Above Self Award. He has been president of the Ocala/Silver Springs Rotary Club and has received the Paul Harris Fellowship honor eight times, which is given in commemoration of donations to the Rotary Foundation for support of scholarships. 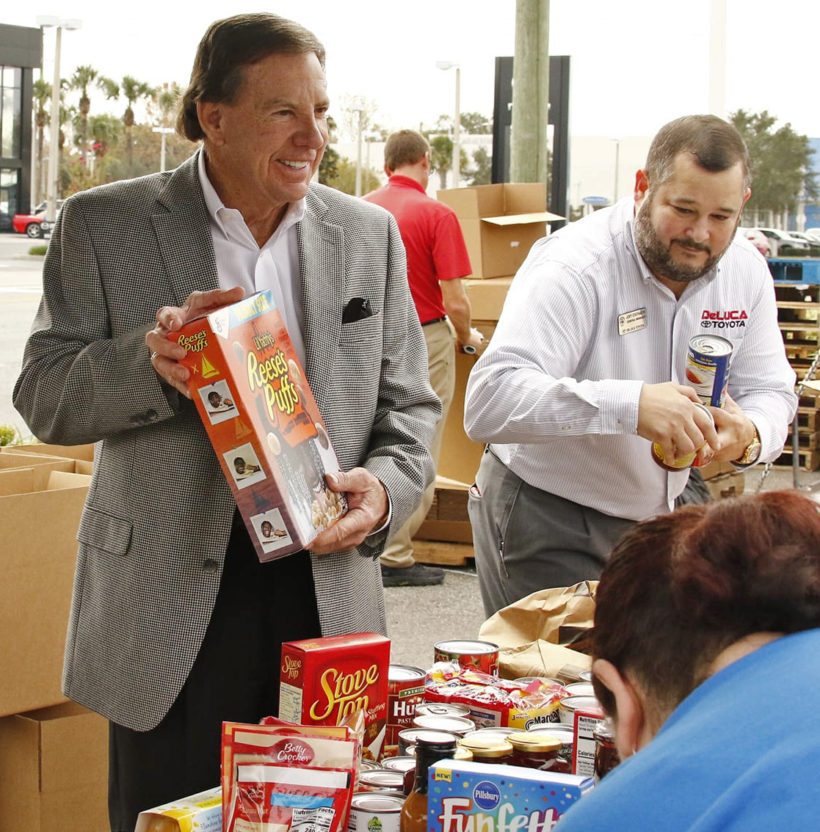 DeLuca has received the United Way Award of Excellence five times. He supports the Ocala Royal Dames for Cancer Research and in 2006 was honored as a Royal Knight. He continually supports the American Cancer Society and American Heart Association’s Go Red for Women initiative. He is a former Honorary Chair for the March of Dimes, March for Babies.

DeLuca has long been a supporter of Interfaith Emergency Services, which provides basic needs and services for those who need them, including a family shelter. The organization recognizes local leaders through the Interfaith Foundation’s Legacies of Love program. DeLuca was recognized as a Legacy of Love honoree in 2019.

In March of this year, Ignite Ocala, which uses its “flame to ignite local nonprofits who need their flame to burn brighter in order to fulfill their mission,” honored DeLuca with its Community Champion Award.

“Ignite honored Frank DeLuca because of his consistent and ongoing financial support of nonprofits in Ocala/Marion County,” shares founder Jeanne Henningsen. “If you ask Frank why he gives so much, he says, ‘It’s just the right thing to do.’ Frank’s generous spirit, desire to make a difference and kind heart has deeply contributed to the well-being of our community. Ignite wanted to honor him for that.”

Henningsen offers that everyone can help improve the quality of life in Ocala by being generous with their time, talent and treasure.

“The more we do this, the greater our community will be,” she notes. “As they say, ‘A rising tide lifts all boats.’”

And, she adds, “Frank is an amazing human being.” 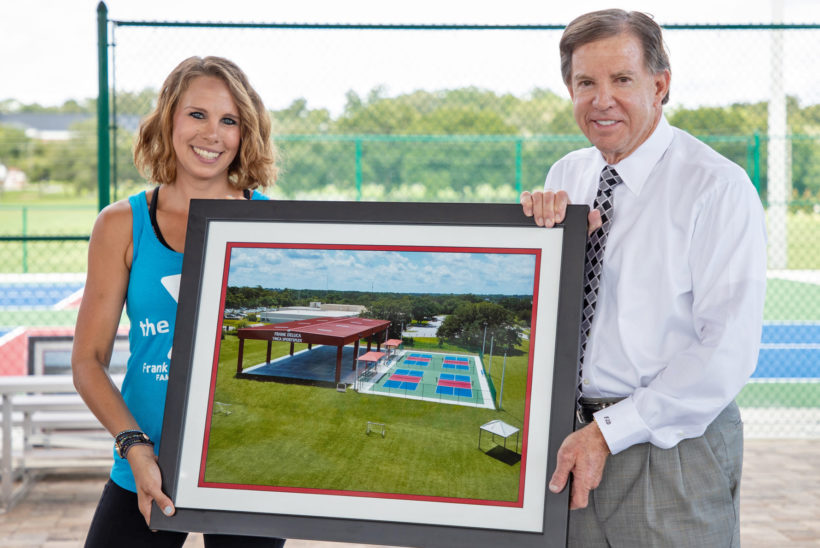 He also has been a longtime supporter of the Humane Society of Marion County, with donations of money and vehicles.

As for what advice this longtime businessman and community champion might have for today’s youth, he shares: “Create goals and work hard to achieve them. Stay determined to reach your goals even through the tough times.”

And, he adds, “It’s nice to be important… but it’s more important to be nice. Keep a positive attitude, be persistent, perseverant and treat people with respect.”