Playing youth football in Marion County is a time-honored tradition, one that is often passed down from generation to generation. 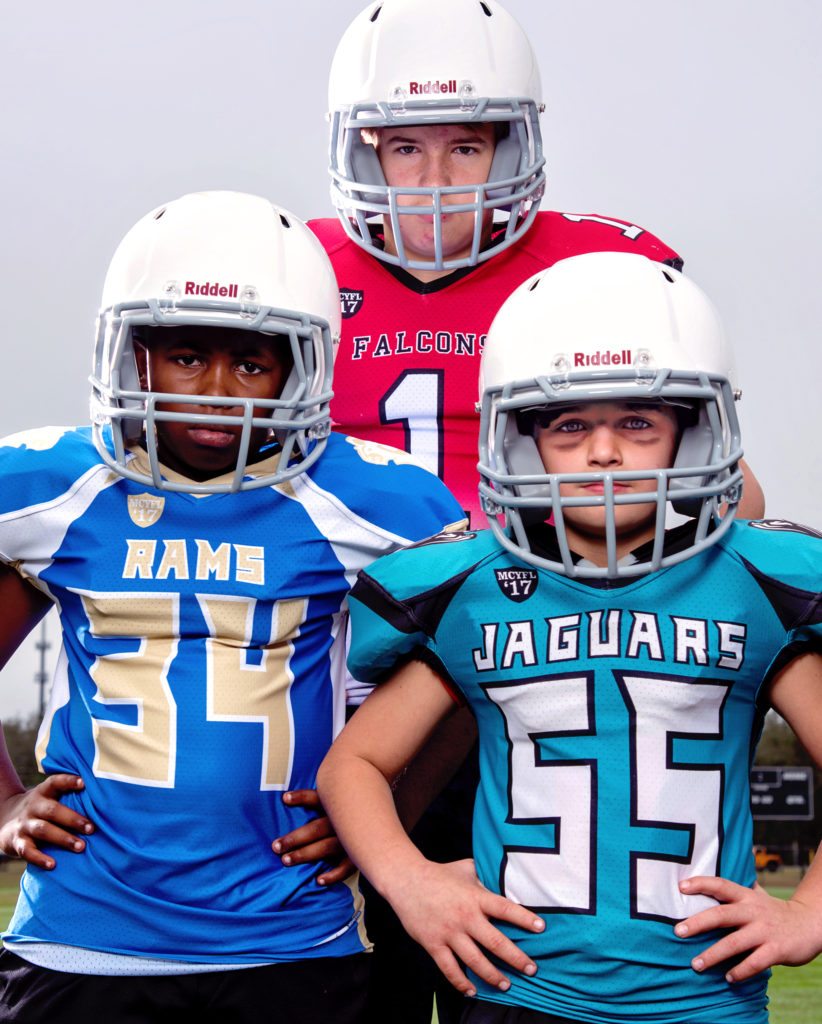 The staccato cracking of shoulder pads and butting helmets is periodically interrupted by the high-pitched whistles of the referee and rhythmic chanting of cheerleaders. A small roar grows like a tidal wave into thunderous reverberation as one of the crowd’s heroes crosses the goal line, pigskin in hand.

One need not see but only hear in order to recognize the immutable scene wedded with the brisk autumnal air—the American gridiron in all its glory, passion and innocence. That innocence is no more clearly on display than on the youth fields across the country and particularly right here in Marion County.

But across these vast United States, participation in youth sports and youth football in particular has declined steadily over the past decade due mainly to soaring costs, distracting mobile technology, the advent of club teams and, perhaps most significantly, parents’ rising fears of long-term head injury. However, one visit to the Jervey Gantt Recreation Complex on any given Saturday during the fall certainly belies the notion of youth football’s waning popularity.

In 2017, the Marion County Youth Football League boasted of 32 teams and 24 cheerleading squads for a total of nearly 1,200 participants, a number that has held steady the last decade. While in the country as a whole participation in youth football has steadily declined—27.7 percent from 2010 to 2015, according to a USA Football study—the MCYFL has maintained its high participation rates.

“(MCYFL) is not about who has the best team or who is winning Super Bowls,” incoming MCYFL President Vince Arnold says. “It’s about love for the game and teaching the game.”

With two fields at maximum occupancy every Saturday, it’s hard to imagine there was actually a time when the fields were not teeming with such excitement. But in the summer of 1970 when John Brantley, Jr. walked up to the Forest High School field house hoping to find information on where to sign his boys up for youth football, he discovered from then-head coach Brent Hall that none existed.

Not a situation to be taken lightly in the football-centric Brantley family, this meeting with Hall proved to be the spark that ignited a Marion County tradition, which has been going strong for 48 years.

“My dad likes a challenge, and he told coach Hall ‘we need to start a league,’” recalls John Brantley III, the son who would go on to play in the league’s inaugural season and later play quarterback at Forest and the University of Florida before becoming a head coach himself and guiding Trinity Catholic High School to a state title in 2010. “I was in the eighth grade, which was the oldest class you could be, and that eighth-grade class was part of the first state championship at Forest in 1974. A lot of Ocala rallied behind this thing. The evolution of the league has been fun to watch over the years.”

The first season, in 1970, the Wildcat Booster Independent Football League consisted of six teams competing at various sites, including Belleview, Dunnellon, Booster Stadium, the old Marion Academy Field and Webb Stadium where MLK Park is today. During the 1980s and into the new millennium, the league played all its games on one field at Jervey Gantt Recreational Complex where it does to this day but now with two fields, creating a football festival atmosphere that brings all parts of the county together.

League Vice President Greg Paquin was a player during that inaugural 1970 season, and he has seen perhaps more than anyone else the vast changes that have taken place in the sport and league in particular.

“I recall my first year of coaching, we went to a storage facility to get the equipment, and it was all stored in refrigerator boxes,” Paquin recalls of the league’s early days. “You had your list, they pulled the boxes down and they rolled onto the parking lot. The stuff we used back then was paramount to what you’d find at Walmart. Today, (equipment) is very sophisticated with fitting helmets—the same equipment used in college and pros. A lot more is put into the safety of the game, mainly because we know a lot more now than we did back then.”

In a Friday night game, the Belleview Bulldogs beat the Panthers 12-0 in the league’s first game. The next night, the Tigers would trounce Paquin’s Cougars 40-12 as Cornell Johnson scored five touchdowns.

The league was off and running, rife with excitement, heartache, victory and injury—all part of life’s lessons learned through sport.

“We had good times,” Paquin recalls. “We went to Belleview on Halloween night and lost 63-0. I broke my nose, and I sat on the bench, thinking, ‘I gave up trick-or-treating for this?’”

Before the 1970 season, the only football for elementary- and middle-school students was the sandlot or recess, and that year local youth enjoyed the opportunity for organized football and cheerleading for the first time. What ensued started as Wildcat Booster Independent Football League, later to be re-named the Marion County Independent Football League and now MCYFL. A training ground and feeder league of sorts for the local high school football teams, the league has since evolved into one that encompasses not just middle-school age players (Senior) but also divisions for second- and third-graders (Pee Wee) and fourth- and fifth-graders (Junior). Cheerleading squads fall under the same age requirements with team placement based mainly on home addresses.

“The biggest thing we teach to (league coaches) is that as many kids as we have in youth football, this might be the last football they ever play,” Arnold says. “They might not make that high school football team for whatever reason, so we emphasize teamwork, discipline and teaching the game of football. We want to play to win, but we strive to get these kids to play ball and let them have fun doing it.”

The same holds true on the cheerleader side, where the fun and excitement of game day is also mixed in with some fiery competition as well. An integral part of MCYFL from the beginning, cheerleaders learn basic fundamentals of what local and state governments officially consider a sport in its own right. At the end of the season, Pee Wee and Junior division squads hold an exhibition competition while the Senior division crowns a competition winner each year.

In 2017, the Senior Wildcats won their second straight title.

“It’s the highlight of the year for the girls—a championship of their own,” says Lois Schwing, MCYFL treasurer and cheer division director. “It’s great to see the kids grow up and then be parents of their own out here. We see generation after generation.” 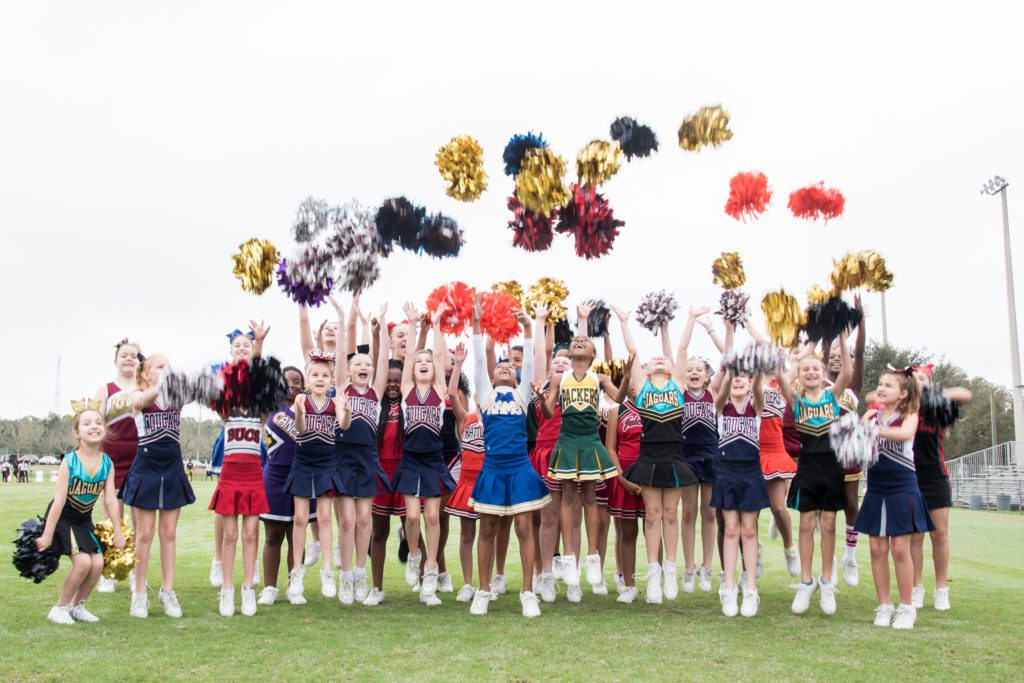 With cheer and stunt teams gaining force, cheerleading participation in MCYFL has dropped in recent years, but it still remains a viable aspect of the league. To Schwing, there’s no replacement for cheering under the lights during an actual game.

“The last five or six years, the numbers have dropped off some as girls want to play other things,” Schwing said. “We’re into basic cheering fundamentals and not stunts. But we have girls that have participated in other organizations, and they come back because they love cheering the games.”

MCYFL registration for cheerleaders took place in February, but girls can still attend football registration March 3 and 10 to be placed on a squad that could still use more girls.

Not affiliated with any national youth football organizations, such as Pop Warner Little Scholars, the MCYFL is strictly a local and independent league. Although many of the same rules of eligibility and safety protocols are the same, MCYFL sets its own standards using many of the guidelines prescribed by USA Football.

Paquin claims the main difference between MCYFL and other organizations, such as Pop Warner, is that “there is no traveling in MCYFL.

“We all play among ourselves—the whole county—all in one location,” he says.

In an era racked with fears of concussion and Chronic Traumatic Encephalopathy (CTE) believed to be found in people with a history of repetitive brain trauma, the MCYFL has taken a very aggressive role in assuring parents that all measures are being taken to make the game safe. The league mandates that all coaches take a USA Football certification course that instructs the safe methods of tackling and is familiar with new rules, such as “targeting” of “defenseless” players.

“We’ve actively let everyone know that our coaches are certified and that we have a Player Safety Coach who roams to practices and makes sure drills and practices are up to standards,” Arnold said. “If a coach doesn’t have a (certification) badge, then he’s not a coach here.”

Arnold notes that players at the highest levels today did not necessarily receive the type of instruction today’s youth enjoy. The culture of safe play will change at the youngest level and work its way to the top through time.

He says that the emphasis on player safety even works its way into the officiating of games, where referees are known to make calls with an err to caution. This means if it looks like an unsafe and unfair hit, a penalty will be called even if the play may not fit the strict definition of “targeting.”

Rules change, techniques change and certainly coaching methods change as well. For Paquin, all the change has been for the good.

“About three years ago, the MCYFL adopted the NFL Heads Up Program, which teaches proper (and safer) tackling and blocking technique,” Paquin said. “You have to get the kids used to playing with the new rules and techniques in order to make the game safer in the future. It’s working. If I coached the way I was coached, I’d be in jail. The game is changing, for the good.”

Honoring its past is something the MCYFL dedicates itself to. One way is through its Hall of Fame located at Jervey Gantt. For each of the past three seasons, one player, coach and administrator has been inducted into the Hall.

The other two members should come as no surprise, the two men who started it all nearly 50 years ago: Brent Hall and John Brantley, Jr. Thanks to them and a community willing to dedicate its time, energy and money to youth sports, the MCYFL has become an iconic fixture of the local sports landscape and continues to be among the top youth football leagues in the state.

“This is a special league, not just to my family but for the whole community,” Brantley says. “I’ll bet two of every three families here have been involved in one way or another. There’s a lot of pride in looking at what this league has become.”