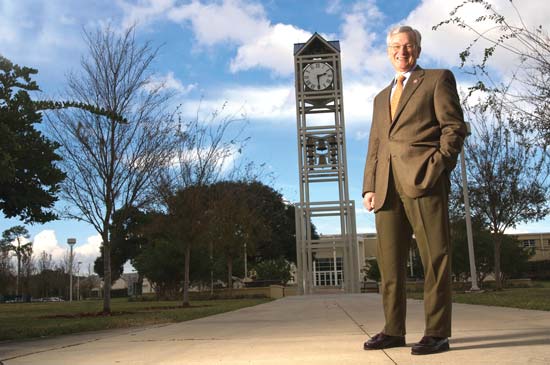 Standing tall on the main campus’ center lawn, the CFCC bell clock tower
was dedicated in 2007 for the college’s 50th anniversary.

“Education wasn’t my life plan when I was an undergrad,” he says. “I was actually pre-med. I worked in a residence hall to pay my way and got interested in the student affairs side of higher education. After that, my interest and major switched to education.”

No doubt the CFCC community—faculty and students alike—are thankful he made that switch. Dr. Dassance became president of the college at a time when the institution was faced with negative publicity and turmoil. He had a challenging job ahead of him—to mend public and internal perception.

The previous CFCC president, William Campion, submitted his resignation Dec. 13, 1995, following controversy surrounding a variety of ethics and whistle-blower complaints tied to his affiliation with a telecommunications company called Excel.

“There was some apprehension as to where the school was headed,” Dr. Dassance says. “But there was never any doubt that CFCC continued to do the right thing, despite the circulating bad news. This institution was ready to move on. I feel fortunate that I got to move with it.”

BEFORE ARRIVING ON CAMPUS, Dr. Dassance used an anonymous survey filled out by CFCC employees to judge the school’s strengths and weaknesses. With this valuable information in hand, Dr. Dassance assumed the college presidency in January 1996. 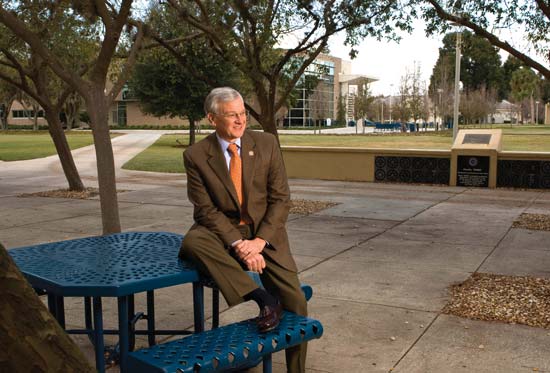 “Dr. Dassance is a great collaborator,” says Sharon Cooper, vice president of
instruction. “His focus is on learning and how that impacts the college.”

Sharon Cooper, who has been with the college for 10 years and who serves as the vice president of instruction, says Dr. Dassance is committed to providing the best learning opportunities possible for both degree-seeking students and those needing additional training in their careers.

“He’s a great collaborator,” Cooper says of Dassance. “His focus is on learning and how that impacts the college, as well as the community. He is a man of integrity.”

IN THE LAST DECADE, CFCC has seen many changes. The new equine studies curriculum is the fastest growing program offered by the school, a major expansion of the RN program increased yearly enrollment from 96 to 150 students a year, and the EMT/paramedic programs were expanded to meet community needs.

In addition, CFCC’s cultural offerings and arts programs were greatly expanded and now include an annual poetry series that brings talented writers to the area.

An ongoing goal for Dr. Dassance is to increase the population of international students.

“A lot of our students haven’t had the opportunity to interact with students from other parts of the world,” Dr. Dassance says. “It helps to understand other cultures.”

As the student population continues to increase, more programs are being offered to meet the demands and needs of these students. It is now possible to earn a bachelor’s or even a master’s degree without leaving Ocala, a source of pride for Dr. Dassance. The University Center Partnerships began with Saint Leo University in the early 1990s. Today, seven universities have a partnership with CFCC including Barry University and the University of Central Florida.

“Because of programs like this,” Dr. Dassance says, “the image of our college has been increasingly positive.”

DR. DASSANCE HAS ALWAYS BEEN a firm believer in the arts. But he’s the first to admit that CFCC wasn’t looking for a museum to run when Florida State University stopped funding Ocala’s Appleton Museum.

“The Appleton is an important cultural icon,” he says. “We’re probably the only community college in the country that has a museum of this caliber.”

On top of the abundance of program additions, the CFCC campus itself has seen quite a few changes in the last decade. One of the newest, the student union, serves as a gathering place for students and faculty. Other recent additions include the Enterprise Center, the clock tower, and the Ewers Center. 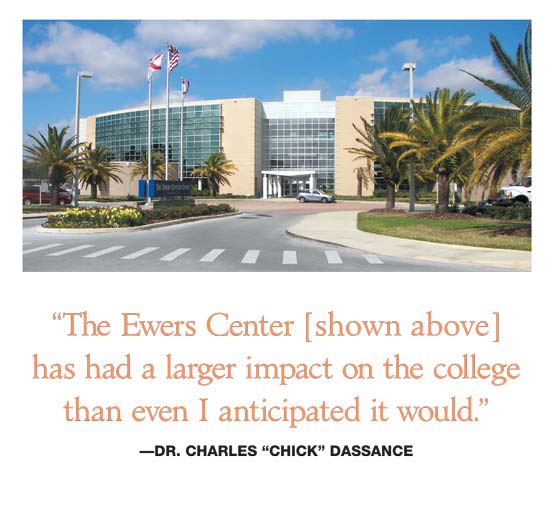 “When the Ewers Center was constructed, it really became the new front door for the campus,” Dr. Dassance says. “It sits on what used to be an empty field that was used for car shows and carnivals. The Ewers Center has had a larger impact on the college than even I anticipated it would.”

ANOTHER BOOST FOR THE COLLEGE was when the Economic Development Council and CLM Workforce moved into CFCC’s Enterprise Center. Students now have the opportunity to apply for job placement and receive career instruction without leaving campus.

“The partnership is beneficial to the whole community,” says Sharon Cooper. “When I first came here, we had some vocational courses, but we weren’t doing the level of work we are now with business and industry. Dr. Dassance provided the leadership that allowed me to develop these programs.”

Many of Ocala’s notable residents agree. Ron Ewers, one of CFCC’s most charitable benefactors, is well known throughout the community. Before opening Class 1, Ewers helped establish Emergency One in Ocala. His son, Randy Ewers, serves as Ocala’s current mayor. Ron Ewers, along with his wife, Phyllis, are longtime supporters of Central Florida Community College. The Ewers Century Center is named in their honor. The couple was recently honored by the Council For Resource Development in Washington for their ongoing support of the college.

And Dr. Dassance instills that same community leadership in his students, too.

“Dr. Dassance makes students aware of how important it is to volunteer within the community,” says Pooja Patel, president of the student activities board. “He truly is a leader who listens to and serves his followers. He interacts with students and community members on all levels.”

Patel, who will graduate from CFCC this May, describes Dr. Dassance as personable, approachable, and available to his students.

“He has always had an open-door policy and takes time to really talk with the students.”

“I’m proud to say I’m a product of CFCC,” Patel adds. “CF has shaped me into a well-rounded person who’s ready to go off and do great things.”

SO WHAT DOES DR. DASSANCE envision for CFCC’s future?

“In the next five years,” he says, “we’ll have created private funding to ensure an endowment fund to start new programs and expand existing ones without having to rely on public funds.”

Dr. Dassance, along with the entire faculty, also plans on continuing to get better at helping students learn.

“When you’re talking about critical-thinking and decision-making skills, it’s difficult to measure the degree to which we, as an institution, have helped our students,” he says. “We’re looking for ways to better document how we’ve aided our students.”

One thing’s for sure, though. Dr. Dassance has no plans to go anywhere else.

“CFCC is still small enough that a sense of family exists,” he says. “CFCC is special.” 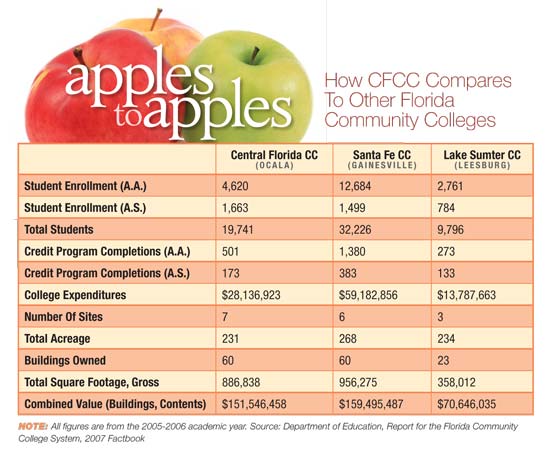