With over 150 breweriesin our fair state, it’s safe to say craft beer is everywhere. We’ve got the DL on seven breweries within a two-hour driving distance for your next tasting adventure. Before you get there, check out our explanation on different types of beer so you’ll know exactly what to order. Feeling like staying in? Good news: You can create a custom brew right at home. For all things beer, start here. 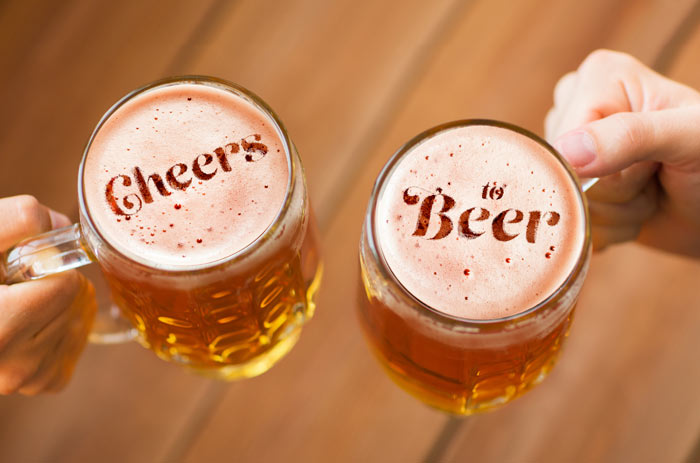 Ever curiously eyed a craft beer menu and then ordered a Bud Light anyway? All that terminology can be overwhelming. Here are some quick and dirty profiles on beer types so you can narrow down the drink list to what you already like or try something new.

Most beers are either an ale or a lager, which are broad categories describing the type of yeast used to produce them. Within those categories are certain styles of beer, each with its own measurements of color, flavor and strength.

Ales originated in England and are brewed using top-fermenting yeast—that just means the helpful fermenting fungi grow at the top of the container. They tend to be darker and more bitter thanks to lots of hops and malt. Under the ale umbrella you’ve got…

Hefeweizen: Unfiltered wheat beer; tends to be tart, dry and can have notes of cloves or spiciness

Irish red ale: Has a red color and tea-like flavor thanks to roasted barley

And for lagers? They were created first in central Europe, cold-brewed with bottom-fermenting yeast for extended periods. They’re usually a light color with mild (and sometimes fruity!) flavors.

Märzen: Copper in color; has a high alcohol content and toasty flavor

Bock: A strong lager, and due to extra months of brewing, it has a strong malt flavor

Bottle snob or can fan: Which are you? Each has their reasons for siding with one container over the other. Cans block out more light than glass, preserving beer’s flavor, and they’re so darn stackable. But bottles don’t have the aluminum smell, impacting taste.

In a blind taste test published on The Huffington Post, three out of four subjects preferred the canned beer to the bottled. Turns out once beer is poured into glasses, the aluminum smell of the can doesn’t tamper with your taste buds anymore.

Turns out you can judge people by their drinks. Budweiser completed a first impressions national survey of 2,000 Americans asking participants to match common bar beverages with perceived personality traits. Domestic beer drinkers were most commonly seen as “more approachable” and “easy going.”

If you want to learn more about craft beer close to home, this is the taproom for you with 40 varieties and five of their own Infinite Ale brews. 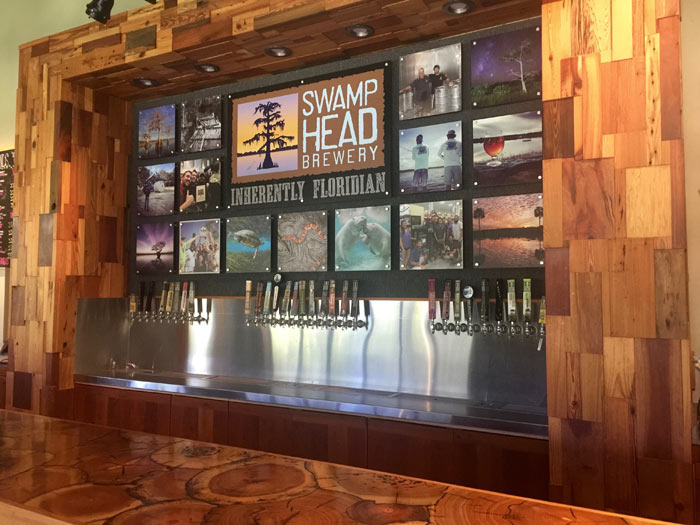 Try a flight for the whole experience, or stick to Stump Knocker (Read on—it’s a Swamp Head insider’s favorite.)

First Magnitude always serves four year-round beers and a seasonal rotation of numerous others. Oh, and they have giant Jenga, Scrabble and more.

They keep some staple brews on tap but are constantly rotating—check their website before going for the latest taps.

On top of being brewed on-site and boasting namesakes for sites around Mount Dora, these brews are also made with organic ingredients.

They have a beer for every palate, but Lucy’s Milk Stout sounds like a perfect drink for this time of year.

Taste one of their signature pale ales, called True Southern Grit, which is made with corn grits for a refreshing flavor.

The Art Of Craft:

Since 2008, Swamp Head Brewery has turned out some of the highest quality craft beer in the state of Florida. Their attention to detail, both in their ingredients and their process, is just part of what makes them so special. Brandon talked with Ocala Style about all things craft beer creation and their dedication to their home state.

How did Swamp Head get started?

Luke Kemper is our owner and founder. Luke went to school in Colorado, and a big part of the lifestyle is craft beer. People go on hikes with cans of beer in their backpack, and it’s about being outdoors and enjoying a beer. When he left Colorado, he finished up school at UF, and while he was in his final year, he said the biggest thing he missed was the craft beer scene. Gainesville didn’t have a brewery at the time, but being the community that it is, he thought a brewery would work.

If someone has never been to a craft brewery before, what do you recommend?

I’m a huge fan of Stump Knocker, but they’re all my babies—I can’t choose a favorite. What we’ll usually do is walk them through a flight of our five year-round beers. It’s going to give them a broad, overall explanation of the wide range of styles (and that’s every beer they’ll see at other bars and retail outlets). We’ll walk them through each style, the flavors they’re tasting and what they like and then walk them through a few other beers as well.

Walk us through the conceptual creation of a new beer.

That can happen a few different ways. There’s a ton of collaboration in our company—a beer idea can come from a guy or girl in the tasting room or Luke, our owner. A lot of times it will be analyzing something we don’t have that we want to produce or just an idea that comes up. The way craft beer is these days, it could be something as simple as “we don’t have a brown ale, let’s brew one” or something as intricate as “hey, what if we brew a beer that tastes a little bit like a mojito?” Then, we come up with branding from there. A lot of times ideas come from having a beer and chitchatting.

What do you think a craft brewery offers a community and its customers?

For us, our passion is beer and our company and how we can grow our company in a responsible manner. From a community standpoint, we really appreciate how people have supported us. We didn’t intend this to be, but from what people have told us, every town needs a brewery and we’ve filled that gap. It’s a place for people to come socialize where there’s not going to be a TV on and you can have a beer with your friends or family and know it was brewed feet away from you.

It’s inherently Floridian. Most breweries will get to a point where they’re selling as much beer as they can in their market and they expand, but we’ve taken the stance that we’re only going to sell our beer in Florida. We want to support our state and our local market.

Want to experience the coming together of breweries and beer lovers alike? Here are some upcoming Florida beer festivals.

Part of the Boca Raton Wine & Food Festival, the Craft Brew Battle puts guests to the test to crown the most knowledgeable taster the Craft Brew Master, and you can vote on best food and beer pairings prepared by expert chefs. Tickets at bocaratonwineandfoodfestival.com.

Festival Park in the Milk District

If you’ve never tasted a barrel-aged or sour beer, this is the event to attend. Tickets at floridabrewersguild.org.

This annual event is great for lovers of beer, wine and food from all over the world. Tickets at disneyworld.disney.go.com.

Grab your lawn chair and come jam out with a huge lineup of Celtic folk rock bands and an equally impressive selection of craft beers to try. Tickets at dunedincelticmusicfestival.com.

Sample the best beers from 13 breweries in South Florida. Tickets at northmiamibrewfest.com.

Key Largo Brew on the Bay

Over 100 beers on tap, live music and local vendors make for a great day by the water. Tickets at keylargobrewonthebay.com.