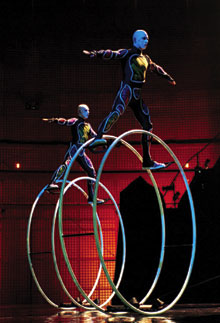 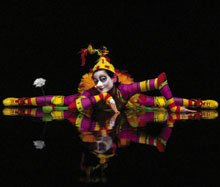 Once upon a time, a door opened and two worlds collided. Dreams clashed with reality. The mundane mixed with the marvelous. It was no longer possible to tell where one world began and the other ended. This new place was called La Nouba.

The conflict unfolds between the colorful Cirques (circus people) and the drab, monochromatic world of the Urbains (urbanites). What ensues is a dramatic, fast-paced display of jaw-dropping athleticism. It’s a musical, a circus, an opera and a theatre production — all rolled into one breathtaking performance by Cirque du Soleil.

Even though it’s a “circus,” there are no lions, bears or monkeys. But people who haven’t been to the big top since they were a child will remember the high-flying trapeze artists and the death-defying tightrope walkers. However, that’s where the similarities end. Many people believe that Cirque du Soleil is the circus for people who think they hate the circus.

Written and directed by Franco Dragone, La Nouba comes from a French phrase meaning “to party or live it up.” The production uses state-of-the-art stage and sound technology, vivid costumes and live musicians (housed in two 75-foot spiraling towers on either side of the stage) to catapult the audience into the surreal world of Cirque du Soleil.

La Nouba is truly one-of-a-kind. Before the main event, two clowns (Balthazar and Sergei) mingle their way through the audience, carrying arm loads of boxes. With a little audience participation, the clowns manage to safely cross the theater and exit the stage. Periodically throughout the show, Balthazar and Sergei will make quick, humorous appearances.

As the house lights dim, a solo trumpet player makes his way through the audience playing a slow, haunting melody. As he circles through the seats, several of the La Nouba performers follow, tumbling, dancing and, in the case of Le Titan (The Titan), almost stalking the audience. The Titan makes abrupt, over-exaggerated movements, always with a sneer on his face.

As the procession of characters comes to an end, the stage lights brighten and the music fills the theater. While watching La Nouba, you’ll find it hard to focus on just one element of the performance, as there are always several acrobats, dancers and vocalists performing simultaneously. The on-stage activity seems like an organized chaos. Performers are moving about constantly, drawing your focus from one side of the stage to the other.

Throughout each act, you’ll notice that dancers are always in the background, walking quickly and in complete uniformity like seasoned soldiers. The Urbanites, wearing their drab dark clothes, appear on stage with purpose in their eyes, as if they have someplace urgent to be. Then, as fast as the dancers appear, they are gone.

There really is no “star” of the show. The experience of La Nouba is made up of numerous segments, which transition into one another effortlessly with the magic of lights, music and theatrical effects.

One particular act features four young Chinese children maneuvering diabolos, or Chinese yo-yo’s. Each child holds two sticks linked together by a string. They slide, juggle, toss and catch wooden spools while performing gymnastics and complicated dance moves. On this particular night, the audience clapped and cheered as the young girls performed flips while throwing the spools high in the air. The girls performed flawlessly, not missing a beat — or a spool for that matter.

Of the 72 cast members of La Nouba, 13 countries are represented, including Poland, Australia and Spain. The cast is made up of mesmerizing dancers, tumblers, gymnasts, actors, cyclists, musicians, equilibrists, and high-flying trapeze performers. Of the 72 artists, 59 are participating in their first Cirque du Soleil production.

Founded in Quebec, Cirque du Soleil has been thrilling audiences worldwide since its debut in 1984. In fact, more than 20 million people have seen one of Cirque du Soleil’s productions. La Nouba has been a staple at Downtown Disney’s West Side since December 1998. The 1,671 seat theater, designed to replicate a traditional big top circus, was built specifically for the La Nouba production and was the first freestanding permanent structure ever built for Cirque du Soleil.

The theater itself is a work of art. The set is designed to look like the great outdoors. Boulders and rocks line the edges of the stage. Look up and you’ll notice the seven cloud-like “Fabulous Figures” that decorate the showroom ceiling. There are five lifts capable of elevating 16 feet in the air. While some performers are dancing atop the stands, others are below, entertaining the crowd.

The stage also features two tracks for moving props, scenery and other equipment. They are retractable and allow the performers to do continuous lines of tumbling.

Personally, I’ve heard nothing but great things about La Nouba, and had been looking forward to seeing the show for quite some time.

My boyfriend Andy and I finally made the trek to Orlando to take in the show. It was a perfect night — not too warm and not too cold. The feeling in the air at Downtown Disney was abuzz with excitement, with people anxiously waiting for the doors of La Nouba to open. While in passing the time, many perused the show’s program, watched the giant video screen above the box office that featured Cirque du Soleil highlights, or sampled some of Orlando’s finest cuisine at restaurants like Bongo’s and Wolfgang Puck’s.

I was anticipating a fantastic show and I certainly wasn’t let down. While some may be put off by the $70 admission price ($44 for children ages 3-9), take solace knowing that the production is worth every cent and then some. Ask anyone who’s been to a Cirque du Soleil production and I would be surprised if they didn’t rave about the show — I know I do when people ask me about it.

After sitting through an incredible 90 minutes, it’s hard to pick a favorite part of the show. I’ve always had an interest in tumbling and gymnastics and I was thrilled when, during the last performance, the floor spread open to reveal several trampolines.

This last segment of the show featured The Titan, and other trampoline acrobats. It was hard not to notice The Titan during the course of the production. He’s always lurking in a corner or standing statuesquely on the stage while other performers are dancing — always with the same sneer on his face. But he shines during his performance that takes ordinary trampoline and power track tumbling to a whole new level.

Timing is a must during this electric performance. Dozens of gymnasts and tumblers flip and fly within inches of one another with grace and ease. As the middle platform rises, a makeshift three-story building appears in the middle of the stage. The Titan and other acrobats sail off the roof, landing on the trampolines, only to take off again in a dizzying array of flips and twists. Walking up the walls and flying over one another, I couldn’t tell what they were going to do next.

In one word, the show was amazing.

Twice every night, hundreds of people leave Downtown Disney, the La Nouba production fresh in their minds. Recently, the production recorded a milestone by celebrating its 2,000th performance on March 14.

“La Nouba, like all Cirque du Soleil productions, is constantly evolving, and promises to surprise its patrons every time,” says publicist Aurélie Heiden. “Experiencing the show will invoke your imagination, provoke your senses and evoke your emotions.”

There is never a dull moment or a lull in the activity on stage. Everything — from the costumes and make-up to the music and set design — appeals to the senses. La Nouba transforms the ordinary into the extraordinary, engaging the imagination from beginning to end.

You’ll have to see it to believe it.

(Karin Fabry is the assistant editor of Ocala Style magazine. She received her bachelor’s degree from the University of Florida. Her interests include music, movies, art, animals and spending time with family and friends. She can be reached at karin@ocalastyle.com)