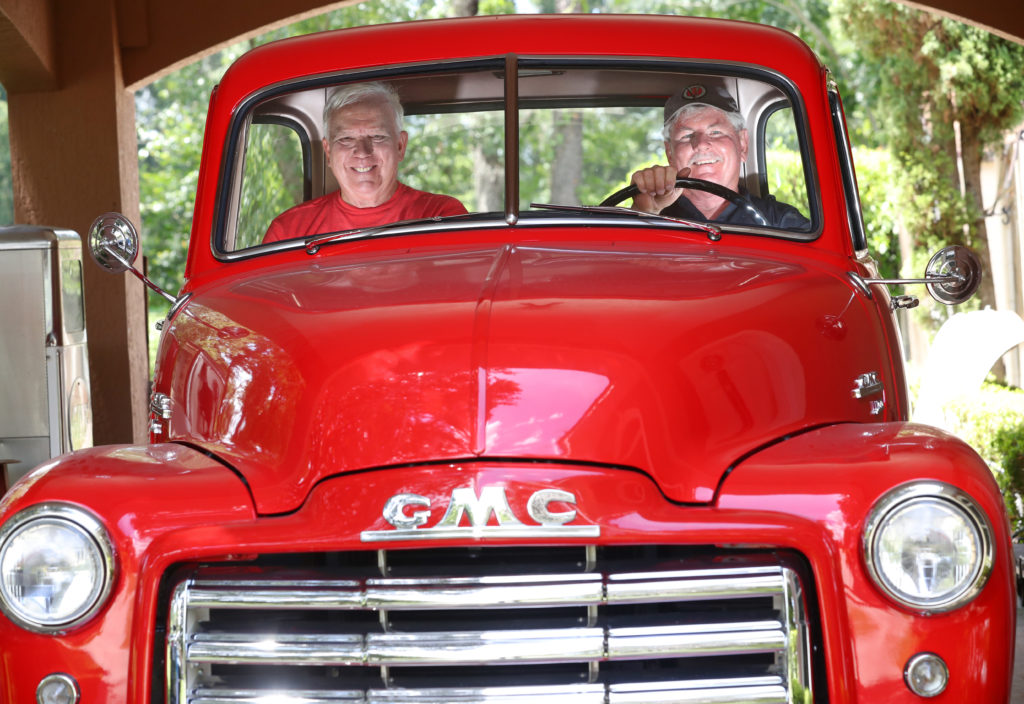 As the two men do a little “bench-racing,” peals of laughter ring out inside the cavernous garage in northeast Ocala where Gene Liles and Frank Amatea have partnered on multiple vintage vehicle restorations.

And when the two get into the cab of Liles’ gleaming red 1950 GMC half-ton pickup, sitting outside near the vintage Gulf Oil gas pumps, their faces light up with the anticipation of a joyride in the truck, which emits the low, throaty hum of engine power from days past.

Amatea, a retired attorney, says he got the car bug early in life.

“You know, some kids are just infected with it,” he offers. “They want to go to the racetrack. They want to drive cars. They want to do hot rods. I was one of those kids. I was never very good at any of that stuff, but I still loved doing it.”

For Liles, the owner of Liles Collision Service for 42 years, his involvement began at Vanguard High School.

“It got started when I took an auto body class in vo-tech (vocational and technical educational training) in high school,” he explains. “That’s where I learned the basics. And my dad had a trailer business and we did sandblasting and painting, so I learned how to do that stuff young and then just grew into it.”

The two longtime friends currently are restoring Amatea’s 1928 Model A Ford, which he drove from his home to the garage. Sitting under a sprawling oak tree near the building, the vintage auto, a dull grey primer color, looks at home on the dirt beneath the massive wheels.

“This is in what we call rough assembly, and it is pretty close to going to paint,” Amatea notes. “In rough assembly, what you’ve done is all of the body work and fixed all the rust on it and made the changes you want to make to the car, if you’re going to make any. This is a mechanical brake car with original wheels, original style tires, and original ahooga horn.”

He says it drives at up to 50 mph, which is “about as good as you want to go in one of these.”

Amatea bought the Model A from the family that bought it new in Philadelphia in 1928. He has had it a year and a half. At the same time, he also bought a 1933 Chevrolet Deluxe Master four-door sedan, both from the widow of a family member. He has the bill of sale for the Model A, dated January 15th, 1928, and paperwork that shows the family was still driving the car as late as 1972, when it had its last inspection in Pennsylvania.

The open cockpit reveals a dashboard with minimal gauges.

“They didn’t need much, just the bare necessities,” Amatea remarks. “There is a speedometer, a fuel gauge, an amp meter, a choke and a step-on starter button. We put turn signals in it.”

He hits the horn and the distinctive loud “ahooga, ahooga” fills the air.

He says the Fords weren’t built for distance, but for getting around town.

“When Henry was building these cars, gas was probably 10 or 12 cents a gallon and there were fill stations all over the place, but there weren’t a lot of paved roads,” Amatea offers. “At the beginning of the Second World War, you couldn’t drive from Washington, D.C., to Tampa on paved roads. They built Highway 301 all the way to Tampa and paved it so they could transport soldiers down there for embarkation.”

Part of the Process

The next step in the restoration process for the Model A is what Amatea calls “paint prison.” 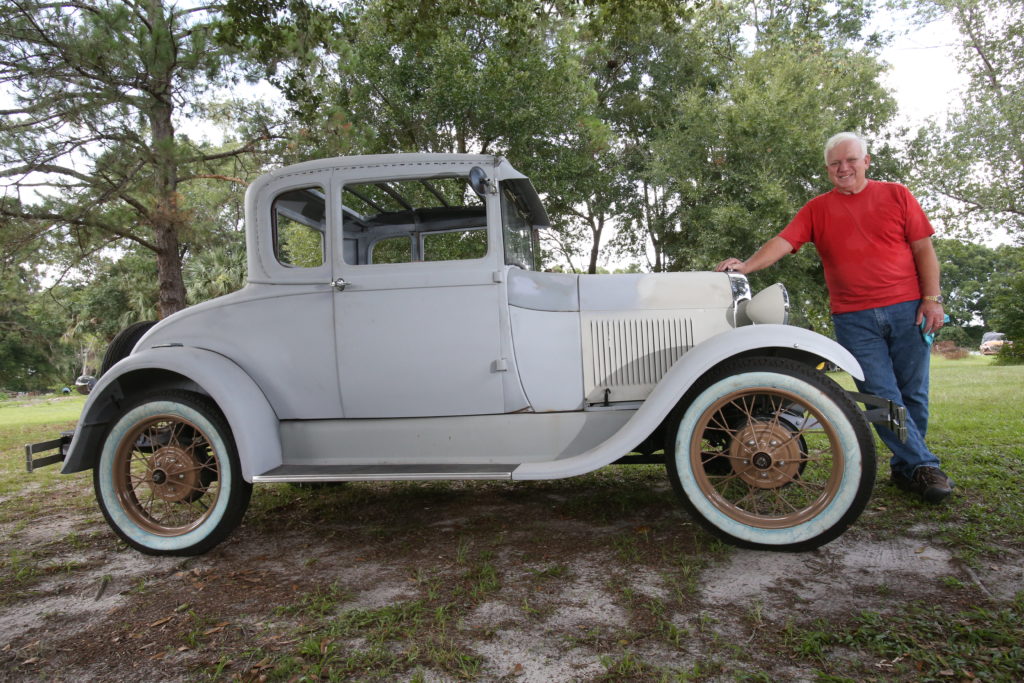 “It’s a lot of touch time,” Liles adds. “You’ve just got to spend a lot of time on them. In the collision body shop we fix about 1,200 cars a year. It could take us a year to do this car.”

Amatea says his wife picks out the color for each of his restoration projects and this one will be painted a 2018 Ford dark green with a little “flake, or pearl” in it.

“Gene has painted every car I’ve ever owned, putting an excellent paint job on them,” Amatea states, adding, as he runs a hand over the hood of the old car, “It has a bunch of new parts on it and we did some things to improve it, but it’s got a stock motor in it, just like Henry (Ford) built it. It is an original, not to this car, but the same kind it came with. It purrs like a kitten.”

Looking around the complex, Liles points out unrestored pickups, Willys Jeeps, a 1963 U.S. Postal Service Jeep, and a 1977 Smokey and the Bandit car like the one used in the popular movie. The restored beauties include a 1935 Canopy Express, known as a Huckster because vendors would drive through neighborhoods and sell food and other items from the back.

Among the vehicles he has restored for Amatea is a 1948 Willys Jeepster (seen on the cover).

“That car came from a collection here in Marion County. I bought all those cars in a single buy, there were about six or seven, all Willys,” he notes, as Liles pipes up in the background, chuckling as he says, “There were actually six and a half cars.”

“We disassembled them and catalogued all the parts then we picked out the best ones and we built the chassis right here and put the motor in it and made sure it would start and pushed it out and then it sat for 12 years,” Amatea says, further noting, “Stuff happens.”

Once the two got back on the restoration, Amatea’s wife picked out the turquoise aqua color, with beige trim, and they sent the car out to have the upholstery done.

“Then we got it ready,” Amatea says, nodding at Liles. “We thrashed and thrashed and got it on the trailer and I headed to North Carolina and we took first in class in a show that I liked doing at the time. They have since changed that show. It used to be a kind of a fun show to go to, but everybody’s going to what they call juried shows, which are very tense.” 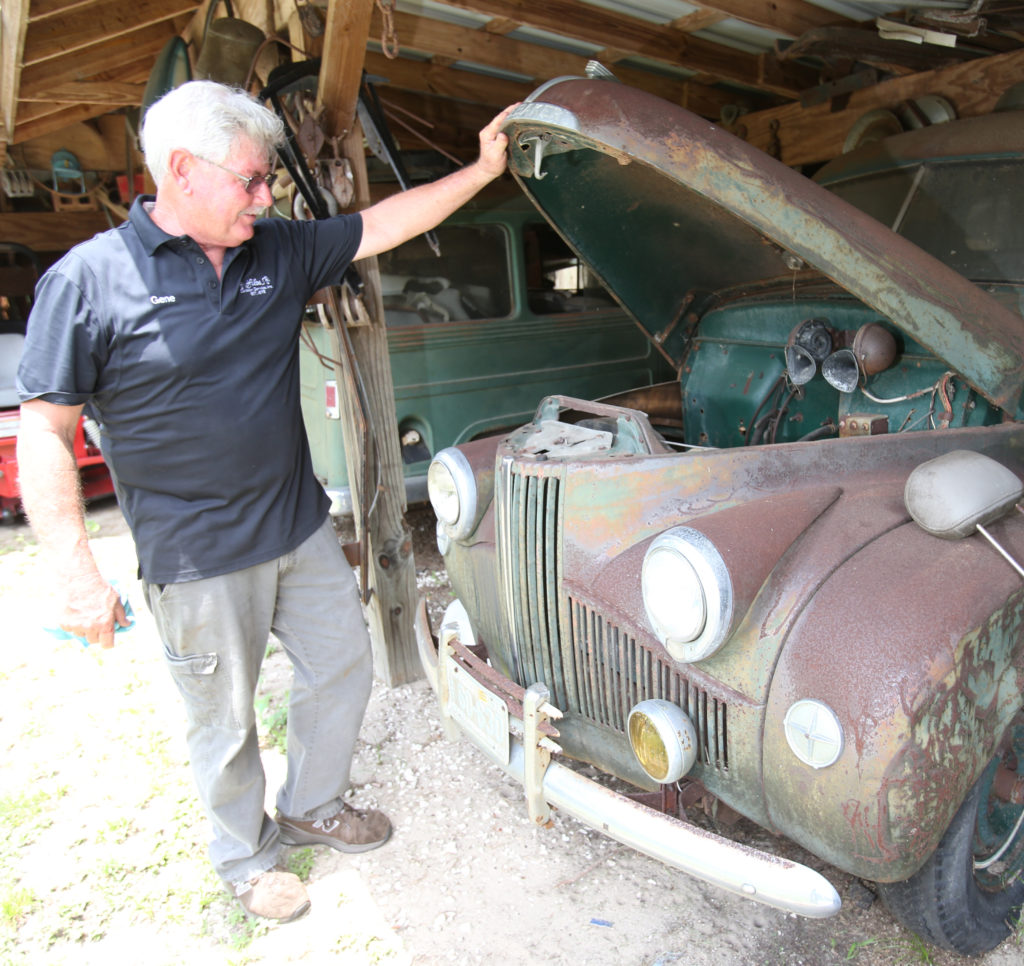 Both men say they prefer to restore cars as “drivers,” rather than “museum pieces.”

“That car was built as a driver,” Liles states. “It’s very nice looking, and it’s very useful. You don’t have to worry about somebody leaning on it or something like that. You’re not going to hurt it. It’s just a fun car and a fun color.”

“Eisenhower’s limousine that’s in there (the Don Garlits Museum of Drag Racing south of Ocala), I painted that one for him,” Liles notes. “And I did a Corvair convertible for him and a ’34 Ford Phaeton.”

“There’s a funny story about Travolta,” he continues. “We were looking for parts for one of his Lincolns and I was calling around and they were saying, ‘Nah, there’s none available,’ and I said, ‘That’s too bad. I’ve got Mr. Travolta’s car here and I can’t find the parts for it. Oh, you got John’s car there? Yes. Well I just might be able to help you out.’ And within a week the parts were there.”

“Gene has done a wonderful job on some of my cars,” Travolta says. “He does very good work.”

In preparing for a restoration, the men say these days it is much easier, because of the internet, to research the background of the vehicle and find motors and parts, and that having like-minded friends helps as well.

“We’ve got friends that mess with these cars and if we need to look at one, we can go see theirs,” Liles offers. “It’s not just us. We couldn’t do it without them.”

“If you need to look up something, you can put in ‘Model A Ford coupes’ and it’ll pull up 50 and you can start scrolling, and bump over to discussion groups,” Amatea adds. 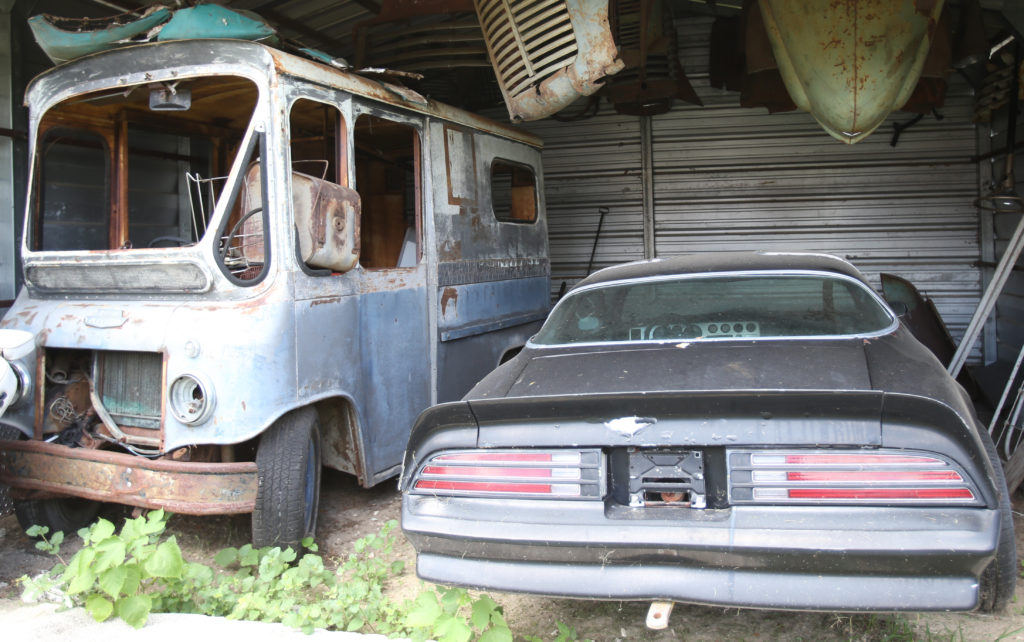 As for the actual work itself, it takes a “lot of patience and you’ve got to stick to it, stay on it, keep pushing yourself to get them done,” Liles says, as Amatea chimes in with, “And you have to just persevere. Just keep at it.”

“You’ve got to want it and, unfortunately true of Gene and myself, we build these cars as if we’re going to keep them, not do the minimum to sell them,” Amatea explains. “And that makes them more expensive to do. I think the passion is, for me, doing them. Once I’ve gotten the sweet spot of doing them and the bragging rights of driving them, I’m done. Send it on to somebody else’s garage and let them enjoy it. I don’t ever think I get all of my money out of them, once in a while I get a sweet deal, but not too often.”

“You can definitely go buy one cheaper than you can rebuild it, with what’s out there at the auctions and internet, but you don’t know what you’re getting,” Liles adds, cautioning, “If you’re buying off the internet, you’d better go look at the vehicle.”

Liles says his all-time favorite restoration was his 1948 DIVCO Model UM milk truck because it took so long to do, roughly eight years.

“The next one I’m working on will probably take the place of that one though,” he states. “It’s a 1956 Studebaker Golden Hawk. It’s going to have a Dodge Viper drivetrain in it, a V-10 engine and transmission. It’s my next real challenge and I’m looking forward to it.”

“Gene doesn’t have a favorite style or car, he sees the beauty in every one of them,” Amatea offers. “And he is willing to massage it a little bit to bring it to the surface. It is a real feeling of accomplishment, and it tests your ability to stay on task.”