Touring Silver Springs in a clear kayak offers spectacular views of life below the surface and up close and personal encounters with the area’s flora and fauna. 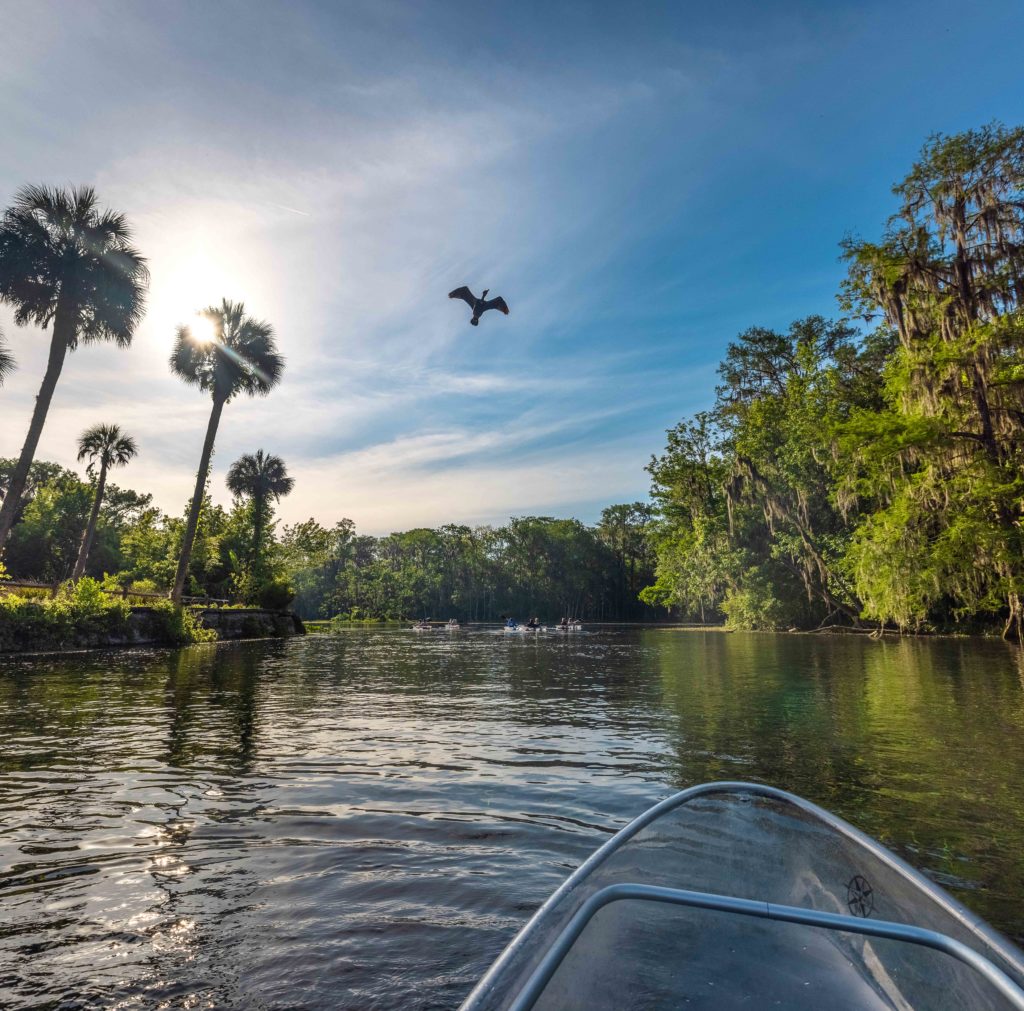 The lilt of bird songs blends with the rustle of a slight wind stirring the treetops near the kayak “put-in” ramp at Silver Springs State Park. As the sun begins to burn off the morning mist, people stop at the check-in hut to pay their $2 park entry fee and negotiate a kayak rental or meet up with the vendor through which they have already made arrangements.

One of the busiest vendors is Get Up And Go Kayaking, which offers clear kayak tours at several locations around the state, including Silver Springs, Rainbow Springs, Crystal River and Weeki Wachee.

Our guide Bryce Neal leads a group of eight eager adventurers, including me and our publisher Jennifer Hunt Murty, on this ride on the wild side. One participant, Nicole Foley of Chicago, here with her boyfriend Martin Alejandro, wears a tiara in celebration of her birthday. 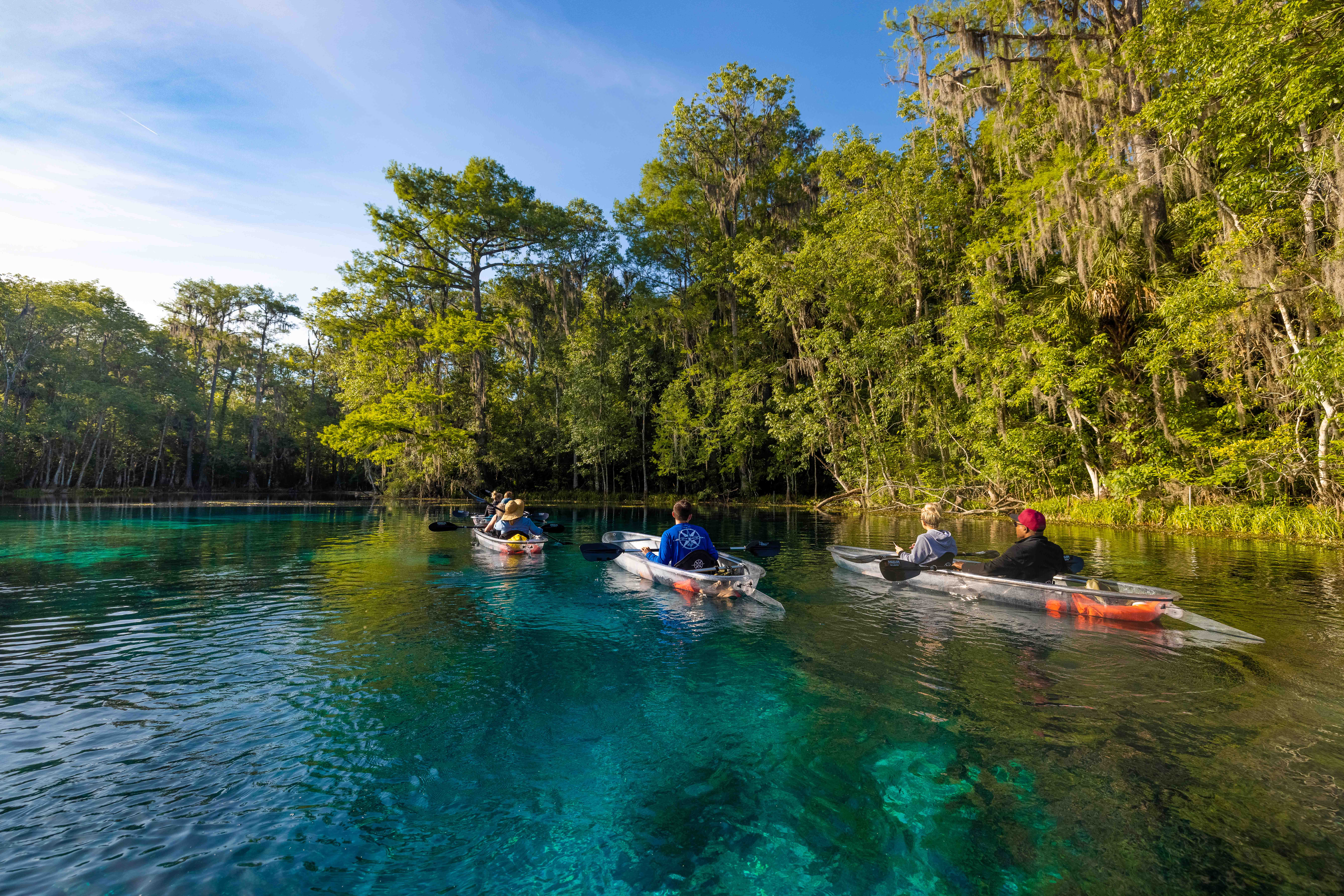 As soon as our see-through kayaks are in the water, there are audible murmurs of “Ooh, look at that,” chorusing from the adventurers. Because the waters of the Silver River and headspring are so crystal clear, it’s easy to take in the splendor of such aquatic plants as eel grass, coontail, Southern naiad, sagittaria and hydrilla through the bottom of the kayak as you glide along.

Once our group navigates a narrow canal into the massive headspring, the view below changes to brilliant blue hues that darken with the depths of the main spring, which is classified as first magnitude because it discharges more than 64 million gallons of water per day. Those waters form the Silver River, which flows 4.5 miles east until it merges into the Ocklawaha River.

In the main spring, from which the world-famous glass-bottom boats launch and return on multiple trips each day, Neal points out three Greek statues underwater that remain from the filming of the I Spy television show. As the gentle current pushes the kayaks eastward, he points out several smaller springs, some of which were used in filming such motion pictures as Moonraker, Rebel Without a Cause, Distant Drums, Creature from the Black Lagoon and six Tarzan films, as well as the Sea Hunt TV series.

“This is definitely one of the easiest places to paddle in Florida,” Neal offers. “There is a no wake zone the whole way through and it’s not that bad of a current. I’ve had a lot of new kayakers come through here and they love it; it’s an easy paddle for them.”

Neal points out a wide variety of birds such as the anhinga poised on tree limbs with their wings spread wide to dry, tall and elegant herons and egrets, feisty hawks, mild-mannered limpkins and darting kingfishers.

Over the course of the tour, which runs somewhere between an hour and a half to two hours, the members of our group call out to each other to point out sights like the years-old iconic twisted “photo op” palm tree on the bank, a massive cypress tree with a ring of polished “knees” and feather-soft leaves grazing the surface of the water, a beautiful white lily blossom deep in the dark green foliage and a fat bellied alligator lazing in the sun on the river bank.

Beneath our kayaks we can see numerous turtles and such fish as long-nosed gar, mudfish and bass.

And then there are the monkeys!

As the tour makes a right turn from the river channel into a side canal, a rhesus macaque monkey sitting on a fence post goes about its business with no apparent interest in the human shouting, “There, over there! I see one!”

In the heyday of the Silver Springs attraction, before it became a state park, Colonel Tooey ran the jungle boat cruise. He brought six monkeys to the park and let them loose on an island, thinking they couldn’t swim away. But they did. And they multiplied. Now, wild monkey sightings are highly sought after by those navigating the waters of the park. While the monkeys are intelligent and highly adaptable, they are completely feral and the Centers for Disease Control warn that they carry disease, so visitors should not try to feed or coax them into closer contact. In fact, care is taken on all excursions to not disturb the wildlife or the natural surroundings.

We glide through the narrow, tree-shaded canal that gives an even closer glimpse into the flora and fauna on the banks, including seeing a gator come up out of the water with a fat fish clenched in its jaws, before the tour ends up back at the launch area.

Get Up And Go Kayaking tours at Silver Springs are by reservation only. They are open to all ages and there are rules regarding weight limits and what you can bring along.

“Our natural springs in Florida are incredibly special to us and we love that we have the chance to introduce others to the natural beauty of the Sunshine State every day,” says Justin Buzzi, owner of Get Up And Go Kayaking. “I always feel rejuvenated after kayaking out here. It puts me into a super relaxed, almost meditative mode instantly. There are studies showing that people who spent two hours a week in natural settings were much more likely to report good health and psychological well-being than those who did not spend any time outdoors.”

Our birthday girl, who has participated in other Get Up And Go tours, was particularly satisfied with this one.