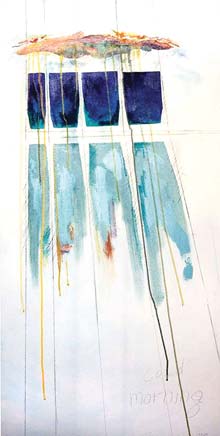 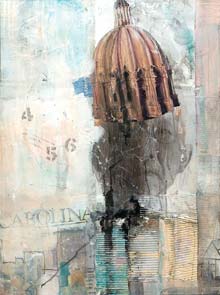 Call it a sort of summertime serendipity. Just when the high price of gasoline makes the vacation road trip seem out of reach, the Appleton Museum of Art offers an exhibition that just may help you feel like you’ve meandered Florida’s byways and back roads without straying far from home.

From the sunshine-bright expanse of coastline and the hush of a forest at sunrise to the whimsical, almost other-worldly view of Koi, dragonflies, and flying fish, the 2008 Appleton Biennial is the perfect antidote to the sweltering dog days of summer.

The juried Biennial, which opened in June and continues through Aug. 17, is the continuation of a tradition introduced by the Appleton in 2004 to showcase outstanding regional artists who offer new or fresh perspectives on traditional subjects.

“I’m excited by any work that causes me to do a double-take,” says Dr. Leslie Hammond, the Appleton’s chief curator, who stepped down last month.

The artists—professional, student, or amateur—all live or work at least six months of the year in Alachua, Citrus, Lake, Levy, Marion, Putnam, Sumter, or Volusia counties.

Hammond reviews artists’ portfolios and visits finalists in their studios before making a final selection. While there are no pre-set themes or limits on the number of artists selected for the exhibition, Hammond is searching for uncommon innovation and excellence. The selection process takes several months.

“Art, whether you actually like it or not,” says Hammond, “provides an opportunity to learn something—a new technique or method, what is cutting edge in the art world, even a new way to look or appreciate another culture.”

A full-time fine artist who lives and works in Ocala, Bill James is a veteran, and master, of three mediums—pastel, oil, and watercolor. To view his work is to take tour of the real Florida, the forgotten, unseen Florida with its timeless vistas and hidden glens. Along the way, he captures the human spirit in intimate repose and expression, caught on the cusp of a sigh or on the verge of the next big thing.

Rachel Wolf, editor of North Lights Books, describes James as an “insightful observer of humanity” who “tells an intimate story with masterful strokes of color.”

James notes that his “main objective as an artist is to try and tell a story and, at the same time, evoke some kind of emotion.” And his passion as an artist, he says, is to constantly search for new and unique ways to do just that.

An impressionist, James toys with the play of light in each scene, but he also exaggerates the mood by use of color and design, painting scenes the way he would like to see them, rather than the way they actually are in order to “get more of an intellectual response from people viewing my paintings.”

Trained as an engineer and architect, Ron Haase, a Milwaukee native and professor emeritus of the University of Florida School of Architecture has, until recently, been better known for his energy-efficient Cracker-style homes than for his artwork. That may explain why Haase approaches art as an “opportunity to simplify structure in nature and in manmade form to its basic tectonic elements.”

At the same time, Haase says he is eager to present a sense of place imbued by the regional landscape and vernacular architecture.

“This is true for me whether I am sketching a white-washed church on Mykonos or composing the austere structural components for a painting of a dilapidated old store in the Everglades.

“The opportunity to embrace the qualities of light, space, and form will undoubtedly provide a resource that will inspire fresh, new images as my work continues.”

Recently retired from UF, and now a member of the Artists Alliance of North Florida, Haase is focusing on his art. My Mind’s Eye has won several “Best in Show” awards and this year the United States Postal Service selected one of his pen-and-ink drawings for use in an invitation. 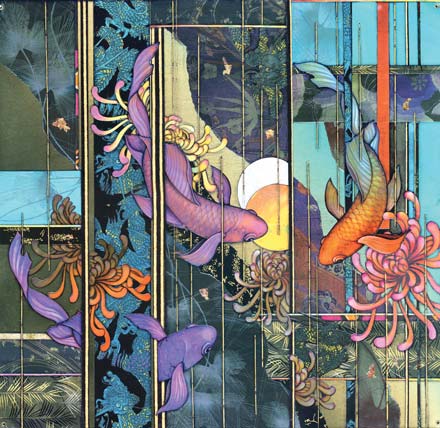 As a child in Massachusetts, Joyce McAdams dreamed of flying fish, their iridescent wings gleaming in the silvery moonlight. Today, the Edgewater artist recreates those fantastical images in a charming world where green goldfish glide and dragonflies drift over double moons.

Trained at the Rhode Island School of Design, McAdams has been a working artist for more than 35 years. Her jewel-like imagery is marked by exquisite detail and a lush vibrancy that translates from paintings to fine jewelry to murals and silk scarves and even to record jackets and book covers.

Today her work is available in more than 30 galleries nationwide and is licensed for distribution by Image Conscious of San Francisco. Her work has been featured in such magazines as American Style and Museum Store and includes paintings, giclee prints, scarves, wall hangings, and ceramic tile murals.

For the past few years Steffen Mittelhaeuser has been photographing the landscape of his adopted Florida home. An adjunct professor at the Southeast Center for Photographic Studies at Daytona Beach College, Mittelhaeuser was initially interested in simply making good pictures. But the Michigan native’s work began to focus on his own relationship to the land, as well as the relationship others may have.

“The pictures are not to reflect any absoluteness of knowing,” he explains, “but rather an intuitive, intimate notion of the connection and interdependence of all things.”