Have you ever paused to admire the colorful life-size horse statues displayed around town? Ever checked out the Walk of Fame “stars” in front of the Marion Theatre, kicked back with a bag of popcorn during a Cinema Sunday or enjoyed a musical dinner show at Hilton Ocala? 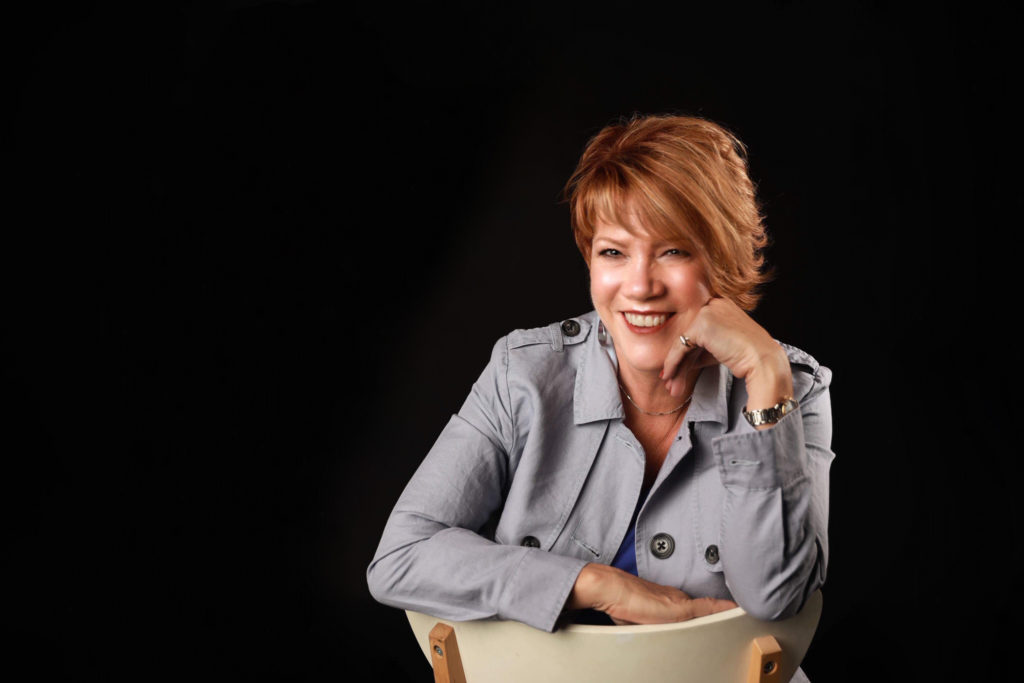 A motivating force behind all those events is a smiling, strawberry-blond bundle of energy named Laurie Zink. Even now, at the age of 61, she’s taken on a plateful of community functions. As an advisor of digital media and technology with the business advisory council at Marion Technical College, Zink is helping students look into opportunities in the business world.

Besides being on several boards, including the Ocala Civic Theatre, Zink has returned, after a brief hiatus, as an emeritus director with the board of the Marion Cultural Alliance (MCA), which she helped found 20 years ago in conjunction with Horse Fever.

“I’m really lucky in my career path, having worked in education, with the business community, now in arts and culture. In all of those arenas I’ve worked with Laurie,” says Baillie. “She is one of the most energetic smart, lively individuals that I’ve encountered, a good person to have on your team.”

In still another arena, Zink has been named development and community outreach director at the Institute for Human & Machine Cognition. Zink explains that it’s not very different from the arts and entertainment scene.

“I do believe science is an art,” she offers. “What I want to do is figure out a way to do something like the art of innovation.

I’ve been playing around with those ideas right now. Arts and sciences are like combining two parts of your brain. It’s very cool.”

As she continues to map out a trail of new projects, it’s no wonder Zink was honored at Ocala’s third annual International Women’s Day celebration, which was held on March 8th. As part of the 100-year-old international celebration, the local program recognized more than two dozen women. Among them, Zink stood out as a trailblazer behind numerous cultural events and social services that generated millions of dollars for the community.

Manal Fakhoury, logistics chair for Ocala’s event, sees Zink as a “go-getter” with a “global vision.”

“Laurie is a wonderful asset to any team,” asserts Fakhoury. “She’s creative, has a large outward vision and is willing to take on new ideas and work hard to deliver value. Plus, she’s fun to work with and learn from.” 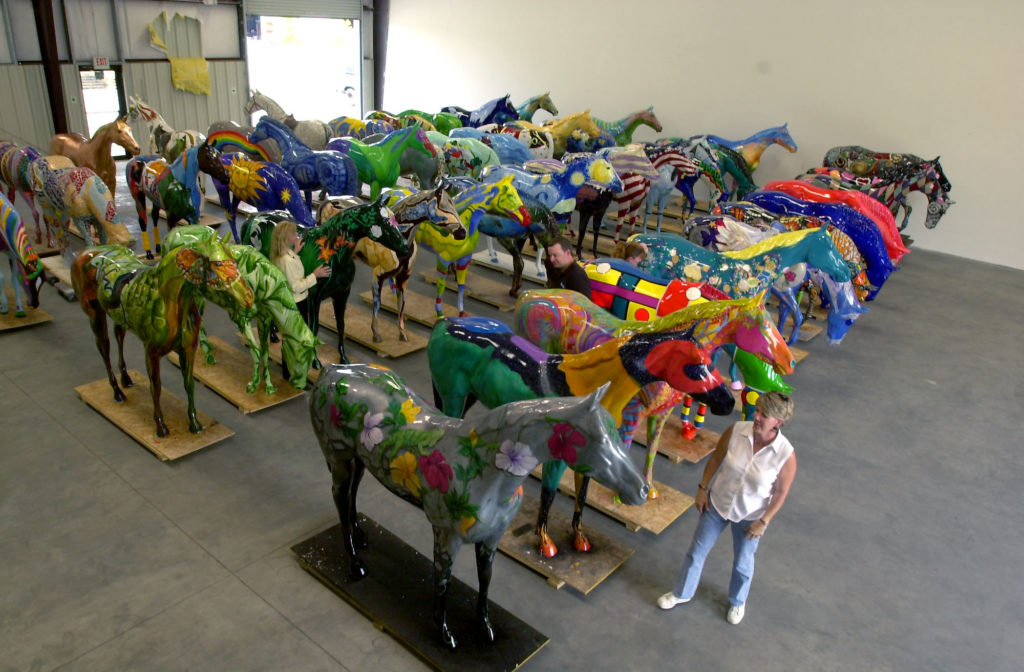 A highlight for Zink was the Horse Fever project she worked on with fellow arts enthusiast, Paula King. They, and a small group that included Jessica McCune, Ellen Gilchrist and Stew Robinson, planned the two-year endeavor, modeled after such community-based public art exhibits as Cows on Parade and others, that featured painted fiberglass animal statues, that were sweeping the nation.

“We literally operated out of Paula’s and my garages,” Zink chuckles. “Then we worked out of a closet in the original Chamber [Ocala/Marion County Chamber & Economic Partnership] office. Two things we did different from everybody else—it was a juried horse art show, and, at the auction, half of the proceeds automatically went to MCA, and the other half to any charity of the buyer’s designated choice. That created such a collaborative feel and got people to spend more money. At the actual auction, the amount [raised] was close to $900,000.”

Zink’s co-chair Paula King can’t help but reflect on the sensitive timing of the project.

“Horse Fever debuted on Sept. 27, 2001, two weeks after 9/11,” says King. “I remember the phone call Laurie and I had. Who was going to care about painted horses? What we learned is that art always has relevancy, never more so than when people are feeling vulnerable. We had the unveiling and our town came together in a moment of joy.”

To King, Zink was a key partner on the project, which ultimately came to life through the combined 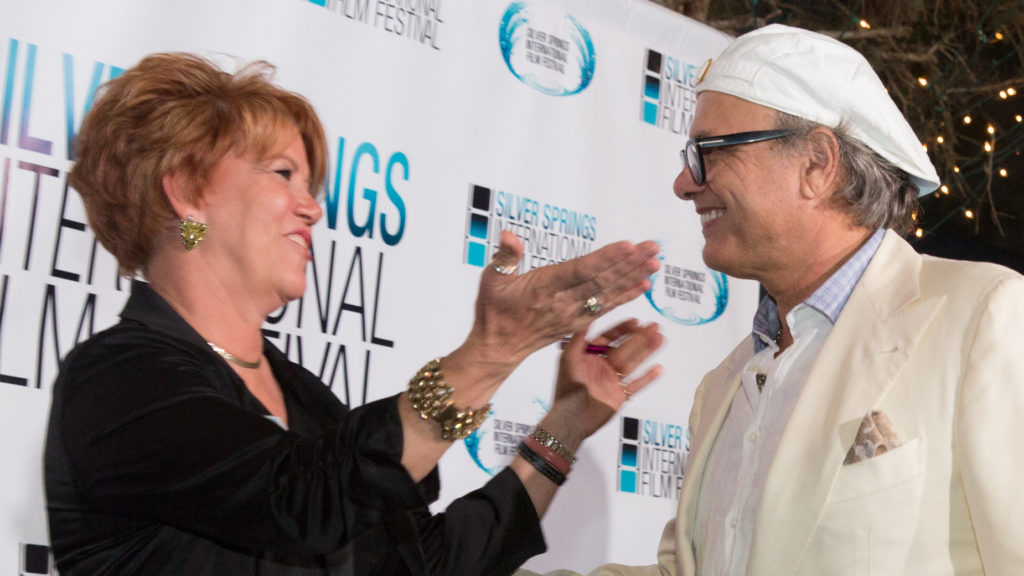 efforts of the hundreds of others that lent their time and talents to ensure it was a success.

“I have a lot of admiration for Laurie, not only for the arts, but whatever she’s doing,” King shares. “You can’t really talk about her without talking about her commitment. When she does something, she’s all in.”

The success of the first Horse Fever project ended up being the impetus for a second installment 10 years later. So, will there be a Horse Fever III next year?

“We’ll see,” Zink replies. “The city would very much like us to do something.”

Another highlight for Zink was a two-day, youth-centered entertainment event called Kidfetti that took center stage in March 2009.

“It was a huge, one-of-a kind event,” Zink recalls.

“More than 20,000 people came. All the entertainers were kids—headliners, like Jordin Sparks, the Naked Brothers Band, and Hunter Hayes. We involved about 100 organizations. Every group had an activity they actually did with the kids. The symphony brought recorders for every kid that came through and taught them how to play the recorder. The whole idea was to bring every aspect of the performing and fine arts to kids who would never have the understanding of all that.” 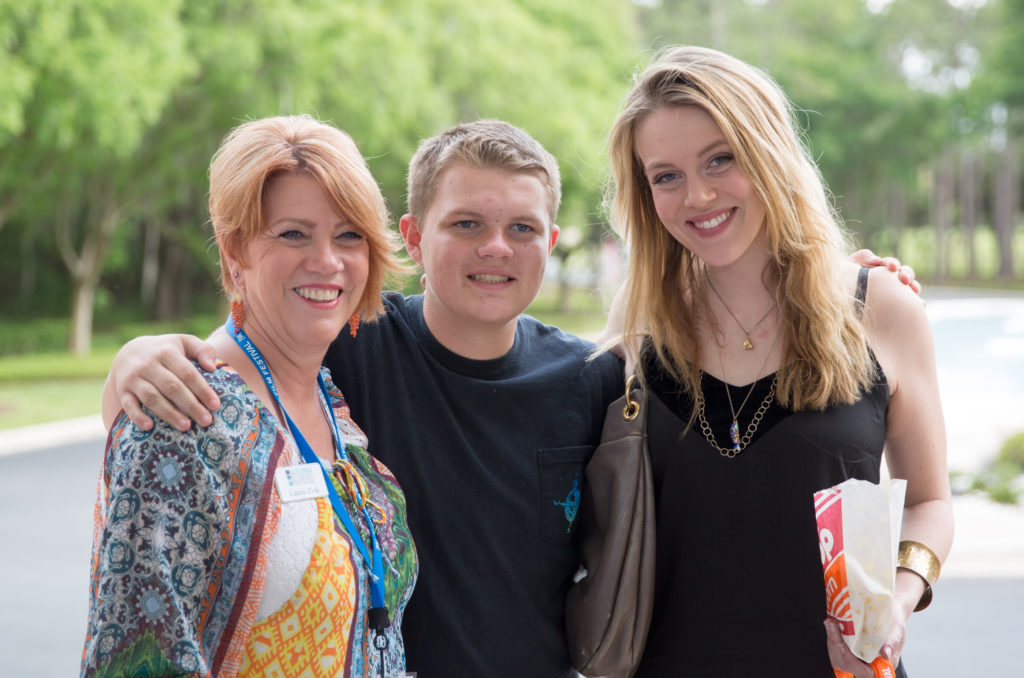 Former Ocala mayor Gerald Ergle was involved in Kidfetti, though he recalls everything was pretty much planned out by Zink before anyone else came on board.  “Laurie knows where she wants to go and she knows how to get there, and if you want to be there, you’ve gotta keep up,” laughs Ergle. “She had me on speed dial for years. She sent me an email one day and said, ‘I lost my phone and I can’t send any calls for a few days,’ and I said, ‘Thank you, Lord!’”

Ergle also joined a whole team of people who promoted the Silver Springs International Film Festival. The Ocala Film Foundation was simultaneously created to put on the festival and several other ventures, including Jump/Cut, Cinema Sundays, and the Walk of Fame. For Zink, the film festival was number one.

“It grew from being a $65,000 budget the first year to more than $400,000 by the fourth year,” Zink declares. “We had nine filmmakers the first year, and by the fourth year, 78 filmmakers came from all over the world. The only reason why we’re not doing it anymore is because this community cannot support a half-million-dollar budget every year. We cannot move forward, on our own, as a group of volunteers.”

State Farm agent Angie Lewis was in on the ground floor, when the idea was to keep it small.

“It grew up into this huge thing,” Lewis recalls. “Laurie is amazing. The thing I love about her, it’s not just about having ideas, she makes them come to fruition. She wants the crowd to have an amazing time, and she pulls it off so it looks simple, but there’s a lot of behind-the-scenes stuff.”

Zink’s passion for the arts, it seems, has spilled over onto her daughter, Brittany Visser, who is 29 and lives in Los Angeles. 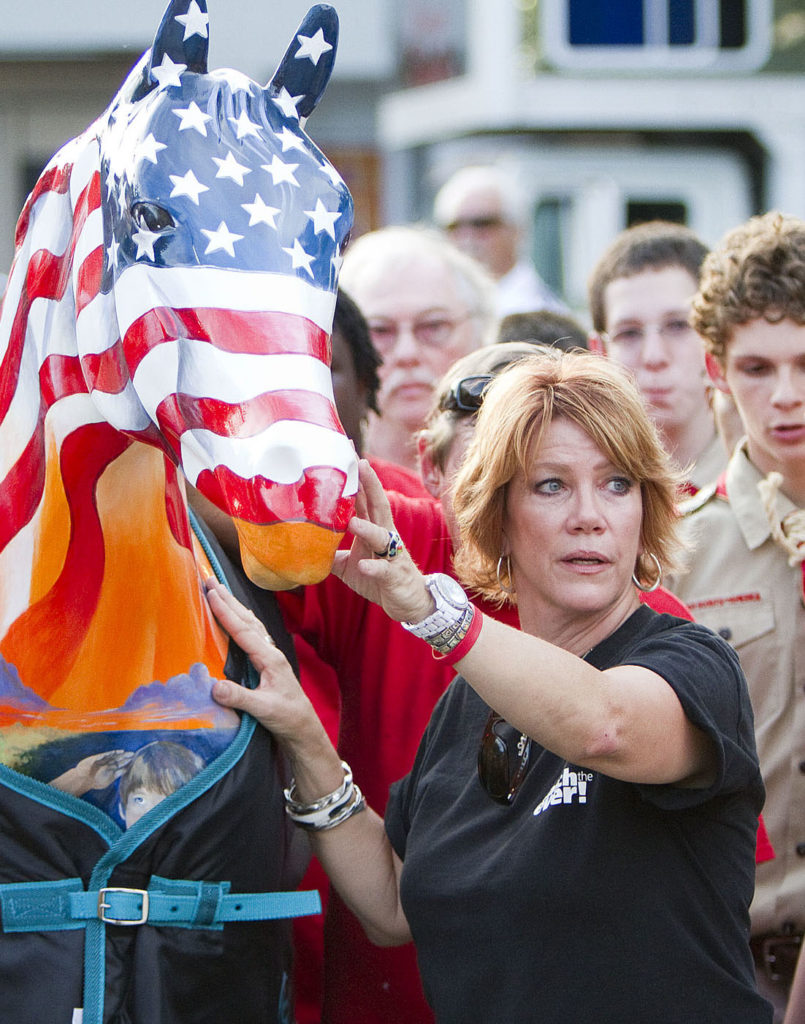 “She was extremely active in Ocala Civic Theatre and has performed at Opera Orlando,” Zink proclaims with motherly pride. “Brittany went to Syracuse University and kept up with her acting and that’s what she’s doing in L.A., and it all started at Ocala Civic Theatre. All that is partly my influence because of my involvement in the arts.”

Zink’s son, Dylan Menard, is a graduate of Forest High School and has had EMT training.

“He’s in that place that 20-year-old boys are when they’re trying to figure out what to do,” she explains. “He’s thinking of pursuing nursing.”

Zink also worked for many years at The Centers, a behavioral health facility, which gave her yet another opportunity to be involved in the arts. Through a collaboration of The Centers and the Mental Wellness Coalition, the “Healing Heart” art project partnered professional artists with a variety of social services. Also for the benefit of The Centers, several fundraisers, including One Night Off Broadway and a series of musical dinner shows, combined with government funding, added a building for the Children’s Crisis Stabilization Unit and 50 additional beds for the adult residential substance abuse program.

Ocala attorney Stephen Spivey notes how difficult it is to keep up with Zink, having collaborated on many of the same projects.

“What you see with Laurie is pretty much what you get,” Spivey offers. “She’s just a genuinely good person—by that I mean, she thinks of others before she thinks of herself. She is an unending ball of energy. It can be exhausting being around her, and I say that in the most loving way.”

Zink’s pioneering spirit didn’t suddenly bubble up when she moved to Ocala. It started while she was studying speech communications at Old Dominion University in Norfolk, Virginia. 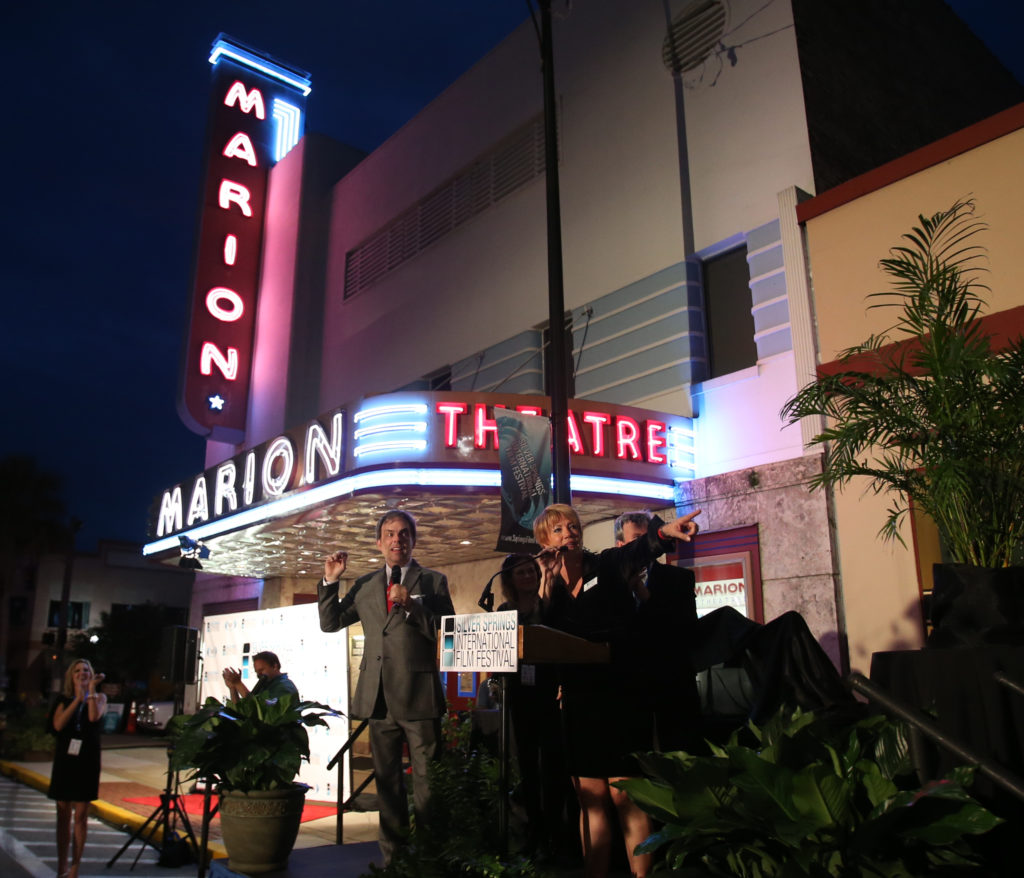 “In college, I was very, very active volunteering for a lot of things, so this illness I have started there,” she quips. “I was involved in music and started a little group that helped underprivileged kids by bringing music to their lives. A big group of us worked very hard for the Muscular Dystrophy Association. We started a summer camp from nothing, raised all the money and had a camp that was just for the kids. That camp is still in existence today in Virginia. It pretty much sealed the deal for me to continue on those paths when I could.”

Zink moved here in 1997 from Hillsborough, North Carolina. The owner of a thoroughbred horse business at the time, she says she was drawn to Ocala because of its title of “Horse Capital of the World.” She worked for a couple of years for the Florida Thoroughbred Breeders’ and Owners’ Association. It was during trips to Lexington, Kentucky, that she encountered a similar project that inspired her to adapt the concept and help bring Horse Fever to our community.

But, Zink’s interest in horses strays in yet another direction, at times.

“When I first came to Ocala, I ended up being chairman for two terms for the Marion Therapeutic Riding Association,” Zink says with a touch of nostalgia. “It was during that time we were able to build the greenway facility. As I wind down with these other things, that is where I want to go back to. I want to become a certified instructor. At this point, I don’t have that kind of time, but at some time in my life that would be on my bucket list. See how weird I am? My bucket list is to still be volunteering.”