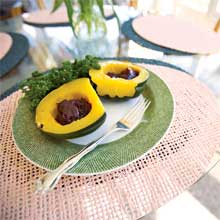 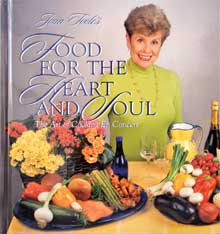 Long before “30 minutes or less” became Rachel Ray’s Food Network mantra, Joan Toole was teaching everyday cooks how to prepare food in a flash. In fact, the first chapter of her award-winning 1998 cookbook is devoted to a variety of 30-minute recipes.

The Villages resident should know about time-saving meals. She is considered one of the pioneers of microwave cooking. In 1967 when microwave ovens were first being introduced, General Electric hired her to teach cooks how to use the new appliance.

“I had three little boys at home, and this was a great job that I could do while they were in school,” she says.

GE knew that certified home economists like Joan could convince women that the appliance would revolutionize the way they cooked.

“A lot of women — even those who are retired — feel guilty because they can’t get a nice meal on the table after they’ve been working or playing golf or doing whatever,” she says. “I teach them to use the microwave en concert with other appliances to create meals that are fresh, delicious, and healthy in less than 30 minutes.”

Cooking en concert is the theme of Joan’s award-winning cookbook, Food for the Heart and Soul: The Art of Cooking En Concert. Named the 1998 Cookbook of the Year by Writer’s Digest magazine, the book features quick, deliciously simple and healthy menus, complete with nutritional guidelines and even grocery lists. And as a bonus, a 21-track musical CD is included to lift a cook’s spirits while chopping and dicing.

Promoting the book led her to meet cooking legends like Julia Child and Graham Kerr as well as to appear on the Food Network during its infancy.

Although the Oregon State University graduate helped to make microwaves a crucial element in modern kitchens, she believes that all appliances can and should be used to prepare healthy meals.

“Cooking en concert with your cooktop, the microwave oven, the toaster oven, and the barbecue is a great way to save time and still get the best of both worlds,” she says. “You don’t have to sacrifice delicious taste for quick preparation.” The healthy part comes naturally for Joan. Jerry, her husband of 50 years, is a retired cardiologist, and they have always been interested in eating healthy and exercising.

“I attribute my interest and focus on delicious healthy eating to him,” she explains. “His patients improved their health significantly under his care. I believe that healthy foods allow you to feel good and give you energy to enjoy an active lifestyle.”

Today, the couple enjoys dancing together, everything from ballroom to Latin to country two-step. In addition, Joan is a competitive race walker who has won several gold medals in the Florida Senior Games.

Since moving to Florida from the Chicago area a few years ago, Joan has continued to share her culinary knowledge. When new friends and neighbors heard about her background as a culinary educator and cookbook author, they insisted that she teach them a few easy recipes.

Her popular cooking “parties” grew by word-of-mouth. She welcomes all students into her home as if they were old friends. After watching her prepare a complete menu, they get to sample Joan’s creations.

She quickly realized that she had to limit them to 10 people to fit everyone around her kitchen. The two-hour “Lunch and Learn” classes fill almost as soon as she announces them. She charges $25 to cover her food costs. Joan is currently planning her fall schedule.

“I have so many recipes that it’s hard to select what to make for each class,” she says. “But I promise the menu will be easy, fast, and fun — that’s the most important thing.”

Microwave Method:
Rinse each squash and pierce 2 or 3 times with a long-tined fork. Place on a microwave-safe rack. Microwave on High (100%) for 6 to 7 minutes.

Cut the squash into halves and scoop out the seeds. Place cut side down in a microwave-safe dish and add 1 tablespoon water.  Cover with lid or plastic wrap, venting one end.  Microwave for 7 to 10 minutes longer.

Place the cranberry sauce in a small microwave-safe custard cup or glass measure. Microwave on High (100%) for 25 seconds.

Place the squash cut side up on a serving plate. Sprinkle with the butter substitute and spoon the warmed cranberry sauce into the centers.

Conventional Method:
Place the squash in a baking dish and bake at 350 degrees for 45 to 60 minutes or until tender.

Place cranberry sauce in a small saucepan.  Cook over low heat for a few minutes or until heated through.

Sprinkle squash with the butter substitute and fill with warmed cranberry sauce.