Ocala Police Sgt. Eric Hooper’s replica cop car fleet was built on authenticity, down to details like a working version of a 1950s-era radar unit. 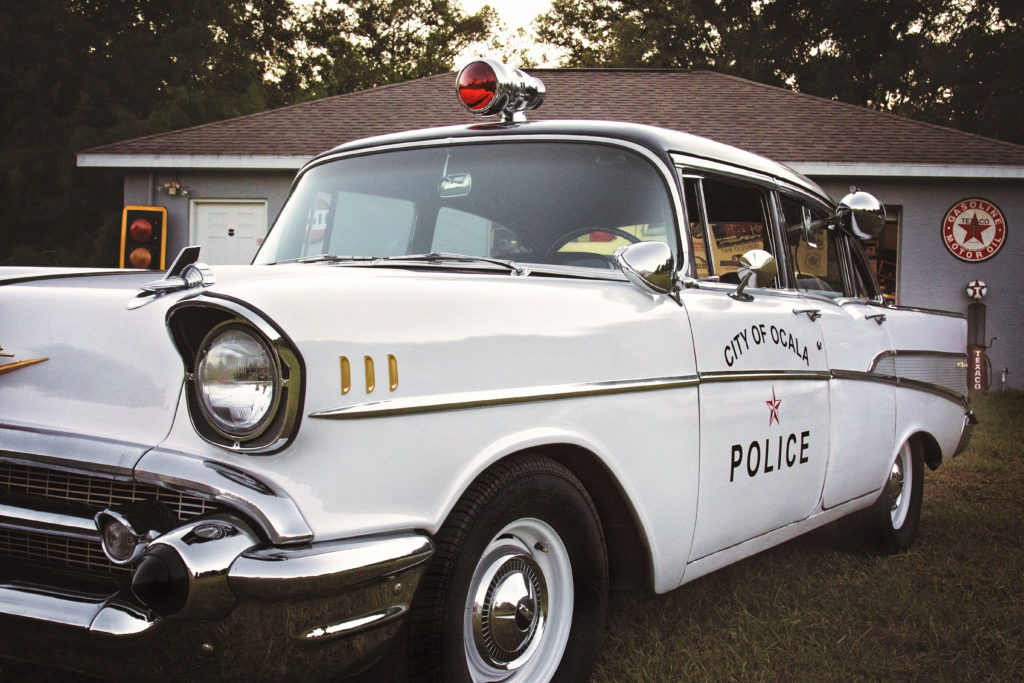 The 1957 Chevrolet Bel Air—with its tailfins, gleaming chrome and bumper “bullets”—was known for style and performance. In addition to quickly becoming a cultural icon among the “coolsville” set, the speedy sedan was adopted for use by law enforcement.

Over his years of building a vintage police cruiser fleet that includes a 1967 Ford Galaxie, 1977 Chevy Nova, 1987 Ford LTD and 1997 Ford Crown Victoria, Hooper always knew he wanted to add a 1957 Chevy.

That happened earlier this year and the fully restored Bel Air is already proving to be a head-turner and award-winner.

Hooper has been with the Ocala Police Department (OPD) for 22 years and is head of the traffic unit and commander of the honor guard. He came to the area from Maryland at age 10, in 1987.

“In 1990, I joined the Ocala Police Department Explorers program, knowing that was what my career path was going to be,” he says. “My grandfather was a police officer for many years.”

As soon as Hooper, now 42, graduated from Forest High School, he entered the police academy at what was then Central Florida Community College (now the College of Central Florida). He joined OPD in 1997.

Hooper explains that while he was at work, he came across a photograph of a 1967 Ford Galaxie OPD patrol car and wanted to replicate it. He says it only took him a month or two to find a ‘67, in nearby Hawthorne. 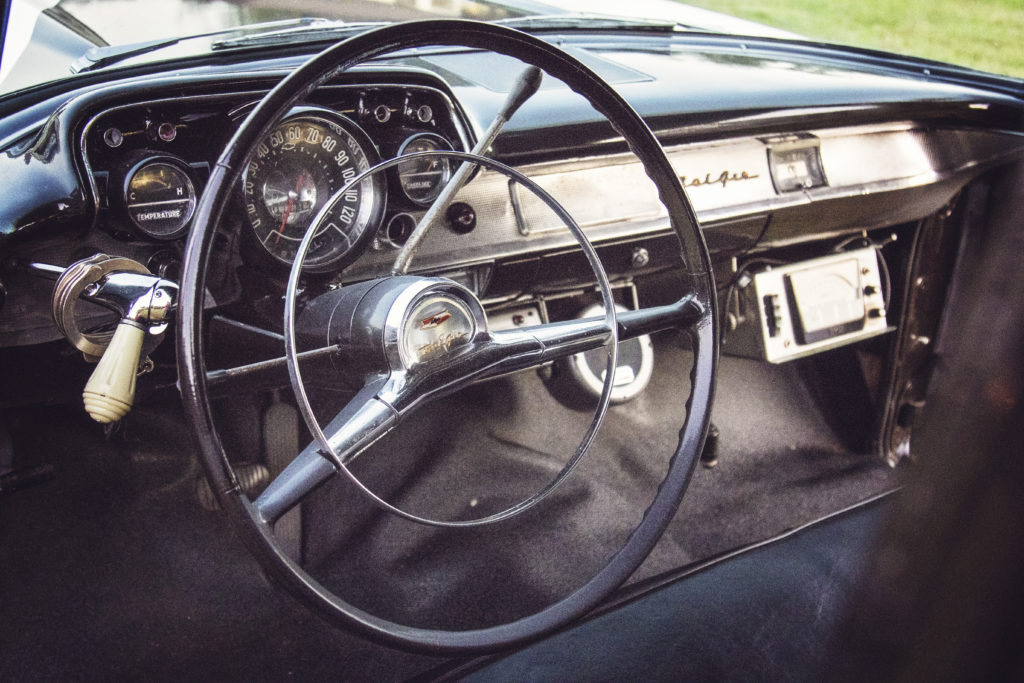 Since then, Hooper has added to the fleet, taking care that each vehicle is outfitted with period-correct equipment, some donated by OPD and other items found online.

When the vehicles needed body work and upholstery upgrades, the work was done locally. The engines are mostly all original, except for the snazzy new addition, the ‘57 Bel Air, in which he swapped the 283 engine for a beefier 305. There’s a race car engine in the ‘77 Nova.

The cars are painted in the time-appropriate OPD black and white scheme and sport period-correct decals. The cars’ numbers on the side panels correlate to something historic. For the ‘67 Galaxie, for example, the number matches that on the photo that gave Hooper his inspiration. For the ‘87, the panel number is that of OPD Police Chief Greg Graham’s first patrol car. The number on the ‘97 was Hooper’s first cruiser ID.

“All of them were based on different pictures that I found at the police department, in our scrapbooks, based on actual vehicles we had, so all of them are exact replicas,” Hooper says.

Hooper also has period-correct uniforms for the ‘57 and ‘67 models, which are displayed on mannequins in the car at events such as car shows. “Everything else, the ‘77, ‘87 and ‘97, they are all the uniform that we use today,” Hooper remarks.

“He will work for hours to make them like new again. He puts his heart and soul into it,” she offers.

In authentically outfitting the ‘57 Chevy, for example, Hooper tracked down the exact top-mounted light and a bulky portable police radio. The car features an early radar unit, with the speed readout mounted under the dash on the passenger side. The bullet-shaped antenna, or “gun,” mounts on the rear window glass.

In explaining how the radar unit worked for officers decades ago, he remarks, “You would park on the side of the road in the same direction of travel. If they were approaching from behind, you’d be able to clock them and then if they were speeding, you’d be able to pull right out and get behind them.”

Graham says Hooper is not only preserving vintage vehicles, he is preserving a legacy.

“His police cars represent decades of hard-working Ocala officers and pay homage to the many changes we have gone through as a city,” Graham notes. “We are happy that he shares his passion with us and the community.” 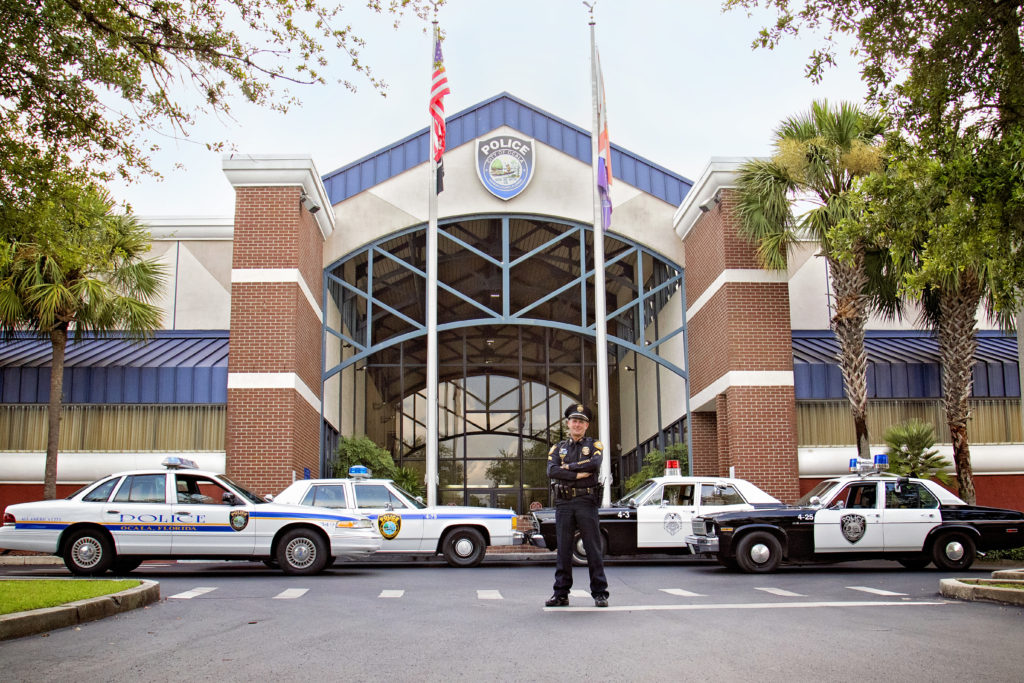 Hooper’s community outreaches include car shows and parades. In 2018, when OPD hosted its first Cops and Cars event as a fundraiser for United Way of Marion County, there were more than 130 entries and his ‘67 Galaxie earned the People’s Choice Award. This year, the event attracted more than 160 vehicles and his ‘57 Bel Air took the same award.

Hooper says that during such events, the two questions he is asked most often are, “Was this a real police car?” and “Can you pull people over?”

“I can pull them over,” he explains with a big grin, “if I can get them to stop.”