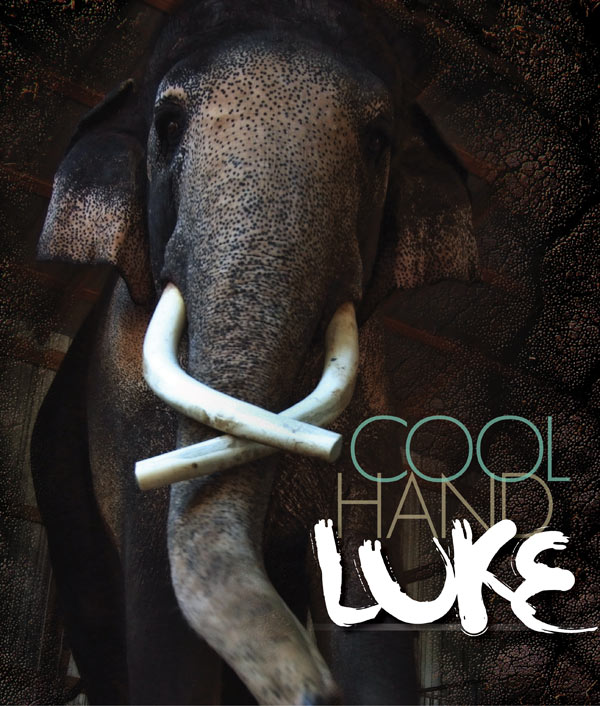 You can lead an artist to the easel, but you can’t make him paint. That only happens when he’s inspired. For Luke, that inspiration strikes regularly.

Standing nearly 12 feet tall and weighing almost 11,000 pounds, Luke is not your typical artist. Thanks to his talent with a paintbrush, the 25-year-old Asian elephant is one of the most popular residents at Two Tails Ranch, an elephant sanctuary and educational facility near Williston.

Owner Patricia Zerbini has kept Luke since he was just two years old. If the gray giant seems more personable than his peers, it’s because of all the time she’s spent with him. 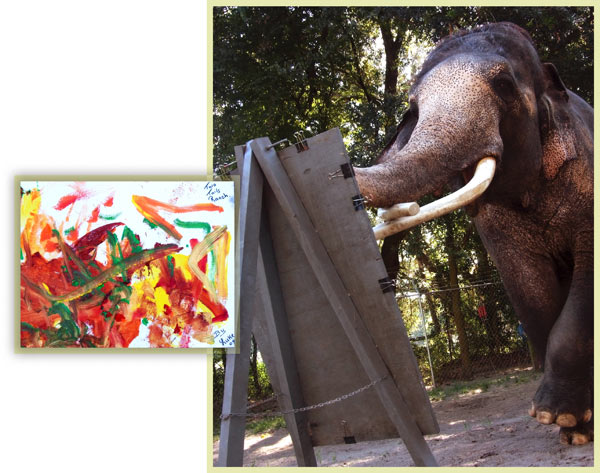 Luke’s artistic leanings were discovered by accident. Patricia was touring with Ringling Bros. in 1994 and her two oldest boys were painting to pass the time between their mother’s lecture sessions. Standing behind the boys and watching, Luke expressed an interest in what they were doing, so Patricia offered him a paintbrush. Grasping it in his trunk, the elephant began swishing it around on the paper.

“I didn’t teach him,” says Patricia, noting that Luke’s paintings have raised almost $175,000 for Ronald McDonald House Charities. “I rewarded him and it became something he liked to do. He actually holds the brush like a hand.”

When groups come to the ranch, Patricia often sets up a canvas and Luke gets busy with his paints and brushes. At times, he’ll even step back and regard the canvas as if he’s considering what color to add next. Although he also paints T-shirts and tote bags, Luke clearly favors painting on canvas. After he’s finished, the group holds a drawing and the winner gets to take home the resulting masterpiece.

More than 200 elephants—as many as 40 at one time—have crossed the gates of Two Tails Ranch since it was founded in 1984. They arrive for various reasons and Patricia opens her doors and her heart to all of them. Some are boarded for Ringling Bros. when they’re not on the road; others are owned by zoos under renovation; and some are retired from a life of performing. If an elephant needs a place to stay—temporarily or permanently—Two Tails Ranch rolls out the welcome mat. 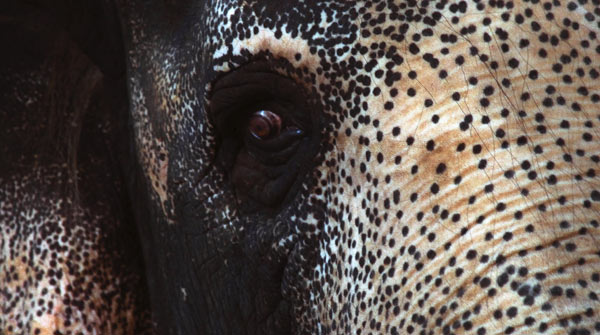 “When Hurricane Andrew went through Miami, we boarded two Asian elephants until the zoo was rebuilt,” recalls Patricia, who has been using her life savings to maintain the facility.

“Elephants are a totally unique species,” says Mark Wilson, a veterinarian who has worked with the animals for nearly two decades. “What Patricia Zerbini is doing is incredibly important for the future of elephants in captivity.”

Born into a family that has made a living with exotic animals for nine generations, Patricia is a natural around elephants. Her father, a native of Italy, and mother, a native of France, immigrated to the U.S. in the early 1960s. For a time Patricia followed in the footsteps of her mother, an aerialist and gymnast who performed in circuses and Olympic-style gymnasiums, but she quickly gravitated to working with the animals she’s loved since childhood.

Elephants are her passion, but educating humans about these amazing animals runs a close second.

“For years this ranch was kept a secret, but it’s been a dream of mine to have this open to teach people,” says Patricia, the mother of four sons. “We’ve always had elephants here, but we only opened to the public in January 2009.” 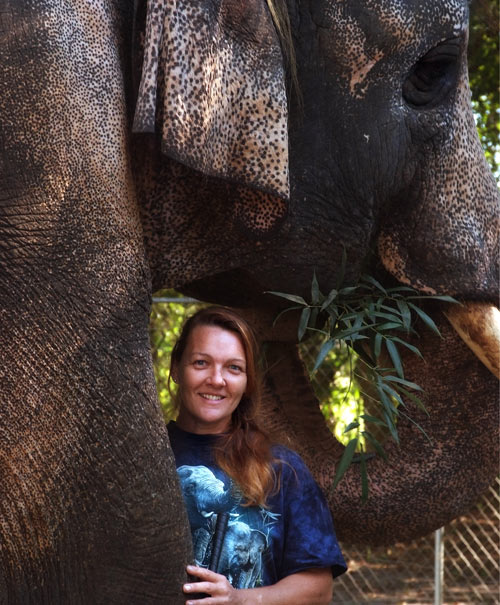 Patricia Zerbini, owner of Two Tails Ranch, makes it her mission to educate the public on these gentle giants.

Those visitors are in for a treat.

While the animal enclosures are concentrated on 10 acres, the ranch itself covers 70 acres. Elephants are, of course, the main attraction, and Patricia’s narration makes for an informative, yet entertaining education as she leads groups around the facility.

The ranch is also home to a two-humped camel named Friday and an ostrich named Katherine. The stunning black-and-white stripes of a pair of zebras gleam in the Florida sun, the patterns as unique as a human fingerprint. 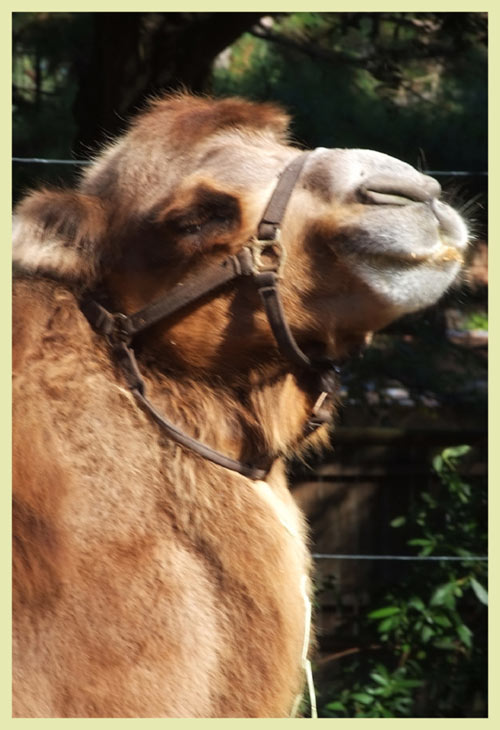 On the tamer side, friendly miniature horses and ponies are happy to be petted by young guests. There’s also an adjacent fenced area where Patricia will turn out an elephant to graze the vegetation and serve as a “model” for budding artists to sketch.

When it comes to elephants, girls rule. Elephants in the wild live in matriarchal families where the mothers, grandmothers, sisters, and aunts all contribute to the raising ofthe young. Male elephants don’t exactly have bachelor pads—they’re either loners or live together in a group with other males.

At Two Tails Ranch, the resident elephants have their own enclosure, but are able to see and interact freely with the others. Come evening, each of the gentle giants is taken to the barn since elephants aren’t keen on chilly temperatures.

Because many of the elephants come from a circus background, they’re accustomed to constant activity and stimulation. To keep them from becoming bored in the tranquil environment at the ranch, Patricia regularly moves them to different enclosures so their surroundings change. She’ll even load them up in the ranch’s tractor trailer and take them for a short ride, then unload and walk them across the 70-acre property.

Elephants have no real enemy except man, but that enemy has proven lethal. Killing elephants for their ivory, combined with loss of habitat due to human settlement, has resulted in serious declines in population. The Asian elephant is currently on the endangered species list and the African elephant is listed as “vulnerable.”

“I’ve seen elephants in the wild in Africa and Asia. There’s starvation, drought, sickness, and poisoning from villagers trying to protect their crops. Every moment is about survival,” says Patricia. “Captive elephants are the only way that future generations will be able to enjoy and be amazed by them.”

Patricia’s fervent hope is to instill awareness about the plight of elephants and what can be done to ensure their survival. In addition to educating the public, she’s also in demand as a consultant and instructor all over North America and South Africa.

“Elephants are smarter than their keepers,” she explains. “When I do consulting, 99 percent of the time it’s the handler’s problem, not the elephant’s.” 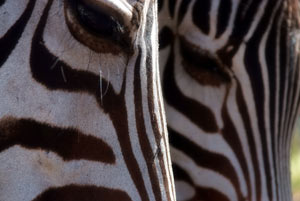 “They have curiosity, their ability to learn is incredible, and they have a good memory,” Patricia notes. “If you show an elephant how to do something and they do it three times, they’re trained.

“I’ve seen them take a tin can, flatten it, and then pick it up to scratch a callus on their knee or elbow,” she adds. “I’m always learning something from these amazing creatures.”

Costs $10 for adults, $5 for children, but appointments are required.