For such a populous and high-tech state, Florida remains full of blessed “dark spots” that enable stargazers to enjoy a buffet of sights in the nighttime sky.

Although you’ll have to trek down to Big Pine Key in the Florida Keys to arrive at a location that is routinely listed among the best 10 or 15 stargazing spots in the country, there are plenty of dark-spot pockets on the mainland you can use to successfully peer up at the heavens. 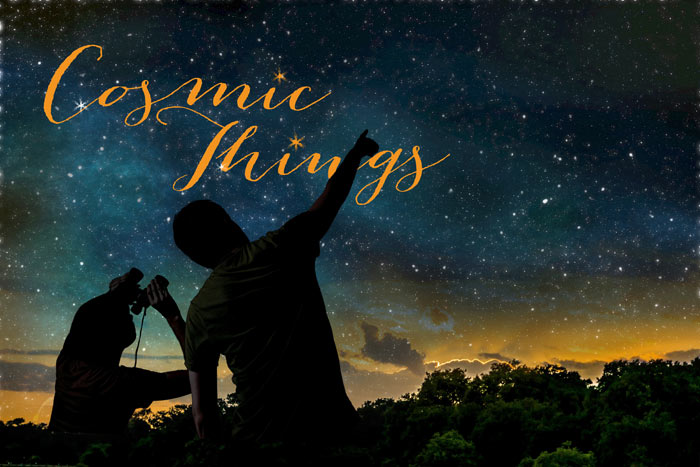 A great place for a stargazing newbie to begin is one of Gainesville’s University of Florida “Public Nights,” which are held every Friday from 8:30-10pm when classes are in session and the skies are clear.

UF’s Public Nights encompass a range of activities, including observation of the moon, planets and stars through 8-inch and 12-inch telescopes; use of a CCD imaging camera to photograph what you see through the telescope as a memento; view Hubble Telescope images and those of other remote telescopes; children’s demonstrations; and Q&A sessions that can help guide your future stargazing.

Contact UF Astronomy for more information (including directions) and dial (352) 392-1016 after 7:30pm on Public Nights to determine Gainesville weather conditions.

Another good starting point for a new stargazer would be joining an astronomy club. The Ocala Astronomy Club currently boasts three dozen members and can be reached at (352) 680-1737 or kking660@earthlink.net for future meeting and event information.

Other clubs in Central Florida include:

Undergraduate Astrophysics Society of the University of Florida (Gainesville)

A planetarium is a museum of stars, in a sense. So if you are looking for an educational experience to complement your glimpses at the actual sky, opt for an indoor show that is sure to teach you a few things about your next stargazing mission. Here are some options:

The most well-known constellation in the Northern Hemisphere isn’t really a constellation at all. The Big Dipper (along with its smaller companion, the Little Dipper) is merely a component of the constellation Ursa Major (the Great Bear) and is considered an asterism (an interesting, easily recognizable star pattern). If you peer northward, you should easily see seven bright stars that comprise it. Most of the rest of the world sees the Big Dipper as a different object, like a wagon. In France, it’s the Great Chariot; in Ireland, it goes by King David’s Chariot; in Britain, the constellation is known as the Plough.

So, while the sky’s most famous “constellation” isn’t actually a constellation, there is still plenty to see; in fact, winter is the best time of year to catch stars and constellations in the night sky.

Turn southward, and the clear, dry winter air reveals a sky rich with stars, one of the spiral arms of our Milky Way Galaxy; and seven of the 21 brightest (first magnitude) stars in the entire night sky can be seen in winter’s southern sky.

The greatest of all constellations, Orion (The Hunter), is a rectangle of bright stars, two corners of which are first magnitude stars Betelgeuse and Rigel. The rectangle is also bisected by a diagonal row of stars termed “the belt,” while another trio of stars below the belt comprises “the sword.”

Tracking down and to the left of “the belt” is a brilliant, white star, the brightest in the heavens: Sirius. Sirius leads the constellation Canis Major (The Great Dog). In winter, refraction makes Sirius sparkle in a rainbow of colors.

Up and to the right of Orion’s belt is a V-shaped star grouping called the Hyades, which comprises the head of Taurus (The Bull). At the upper-left end of the V is Aldebaran, the reddish-orange eye of the Bull. Farther out from the Hyades is a small star cluster that can be seen with the naked eye, the Pleiades (Seven Sisters).

The uppermost horn of Taurus is part of a pentagon that includes a bright yellow star, Capella. The pentagon itself is the constellation Auriga (The Charioteer). Auriga is above Orion and sits directly overhead of our Northern Hemisphere in the middle of winter.

Extend a line from Orion upward through Rigel and Betelgeuse to the rectangular constellation Gemini (The Twins), containing bright stars Pollux and Castor.

To the left of the line connecting Sirius, Pollux and Castor is the first magnitude star Procyon. Procyon forms an equilateral triangle with Betelgeuse and Sirius to form Canis Minor (The Little Dog).

When To See The Sights

There are numerous notable astronomical dates through the end of the year:

November 4-5: A Taurids meteor shower produces only five meteors per hour, but many are fireballs, from late night to dawn.

November 14 (and December 14): The full moon phase (supermoon) happens when a full moon or new moon gets closest to Earth, making it look around 12-14 percent bigger than a micromoon.

November 17-18: The Leonid meteor shower is so named because the meteors seem to emerge from the constellation Leo. This shower occurs every 33 years, when the Earth passes through debris of the comet Tempel-Tuttle. You should see around 20 meteors per hour, best after midnight.

November 29 (and December 29): The new moon phase means the moon is not visible, making it easier to stargaze on other celestial bodies.

December 11: When Mercury is at its greatest Eastern elongation, it is most easily seen after sunset. Mercury is normally very hard to see because it orbits so near the Sun.

December 13-14: The Geminid meteor shower should be so bright that it outshines the light of the supermoon on December 14.

December 21: Winter solstice (5:44am EST) is the longest night of the year, when the sun is directly over the Tropic of Capricorn.

December 21-22: The Ursids meteor shower is so named because the meteors seem to emerge from the constellation Ursa Minor. Like the Leonid, it occurs every 33 years, when the Earth passes through debris of the comet Tempel-Tuttle. You should see around 10 meteors per hour.

If you’re ready for some serious stargazing, head to one of many Central Florida observatories to supercharge your view of the universe:

Robinson Observatory, University of Central Florida (Orlando): Knights Under the Stars, 8:30pm on Wednesdays or Thursdays when school is in session

There’s more to the starry sky than what can be seen at observatories and planetariums. Florida has several impeccable dark spots open to anyone with a telescope, binoculars or merely a pair of eyes. Here’s a primer:

Chiefland Astronomy Village (Chiefland): This collective of stargazers has created one of the best amateur locations in the state, hosting monthly “star parties” and/or “new moon weekends.”

You Don’t Need a Telescope!

For many of the major astronomical phenomena, you only need your eyes to observe. For instance, for any one of the many meteor showers, follow a few basic tips:

Get out of the city to a place where artificial lights won’t impede your viewing. (Check floridaastronomy.weebly.com/dark-sites for an animation of the best dark sky sites in Florida.)

During a shower’s peak, you don’t need special equipment, only your eyes.

Bring a blanket and chair for comfort, as stargazing takes patience. And once the show begins, you won’t want to go home until it is over.

Make note of the weather forecast, as well as times for moonrise and moonset, to prepare properly for your gazing.

A nice guide for viewing planets, stars and constellations at different times of the year—by naked eye or telescope—is at earthsky.org/tonight.

Once you’ve decided to take a deeper dive into astronomy and are in the market for a new or improved telescope, use this primer below to make the best of your stargazing:

Binoculars first: Don’t jump right into telescope use; instead, feel your way through the sky using a pair of binoculars. This also allows you to observe all the basic star phenomena at a fraction of the price.

Realistic expectations: A good telescope will allow you to see all the planets in the solar system, as well as stars and deeper sky objects. But in all cases but the moon, detail won’t be terribly crisp—not when you’re used to seeing Hubble Telescope images and the like.

Cool down: In Florida, there are plenty of dark sky locations, and the state is known for good “seeing (atmospheric) conditions.” But remember to let your telescope adjust from indoors to outdoors with a cool-down period (15 minutes to an hour), otherwise your images will be distorted.

Power down: Although high magnification helps discern detail once an object in the sky is located (moon crater details once you’re pointed at the moon, for example), low magnification (30x to 50x) generally makes it easier to find sky objects and is where most observation occurs.

Performance: The three most important aspects of telescope performance are optical quality, mount and eyepiece.

GOTO: Telescopes with built-in GOTO locators (like a GPS for stars) are recommended beginning only at the $500+ range. And keep in mind that much of the joy of stargazing is locating at least some sky objects yourself!

Where to buy: It’s common sense advice, but to ensure quality parts and craftsmanship, it’s best to buy from a store or website dedicated to telescopes.

Budget $400: This minimum investment for a quality telescope should get you a 6-inch Dobsonian telescope, one additional eyepiece and an excellent astronomy guidebook, like NightWatch by Terrence Dickinson.