Lightning usually doesn’t strike the same place twice, but when it does, it gives a literal meaning to the words ‘getting a message from above.’

“My best friend David and I were outside and talking about death,” he remembers. “Then the bolt hit us. David was dead. I prayed. I would have done anything to get him back.”

Mark was given absolute faith on that sad day. 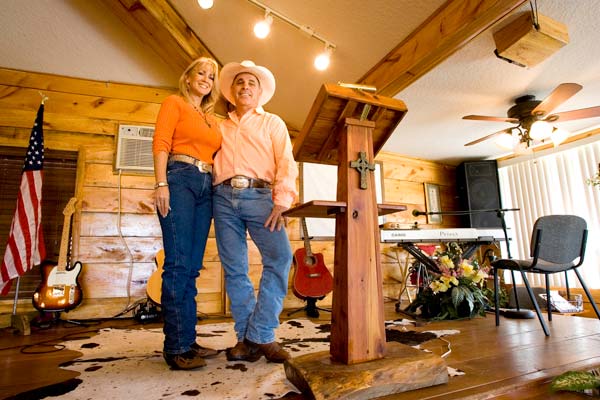 Since 2000, Mark Gould has been the pastor of Morning Star Ministry on a 20-acre horse training facility in Leesburg. His wife, Debbie, helps him host horse shows, trail rides, and other faith-based equestrian events. In 2004, they built a chapel from trees brought down by Central Florida’s hurricanes.

He came from a family of pastors and horsemen, so his faith was deeply rooted. His path to the pulpit, however, was not the normal route. Family clergy members expressed disdain at his goal to become a member of the U.S. Olympic Equestrian team. That meant horse shows on Sunday and not church.

“God is everywhere,” he reminded them and himself.

One Sunday, he discovered a “Cowboy Church” in the bleachers of an equestrian show arena. He wanted to begin the same kind of church. That goal was eventually realized, but the Olympic dream ended in 1992 with another devastating event struck.

This time he was hit, not by lightning, but by a vehicle. His back was broken in eight places, and he was nearly paralyzed. The accident would have broken the spirit of most men.

“My passion to preach comes from these life experiences,” Mark explains. “I know better than most the meaning of Daniel 10:6 and Matthew 28:3, which both mention that the ‘Lord’s face is lightning.’”

Mark and Debbie married in 1999, and he calls her his best friend on Earth. With her love and his vision, he began to heed the call to preach but not from a traditional pulpit.

Mark became what is known in cowboy vernacular as a “circuit preacher,” and his services were usually held outside once a month. People wanted more. So did Mark.

His Morning Star Cowboy Church emerged from a storm. The peaceful and rustic chapel was built after the 2004 hurricanes that came through Central Florida. Mark and Debbie noticed their property seemed to fare well, but neighbors’ properties “looked like a war zone.” They knew uninsured elderly couples with crushed homes. He took his backhoe and removed fallen oaks, pines, and cedars.

“It was a blessing to help those people and to see the look in their eyes when I told them they didn’t owe me a thing,” he says. 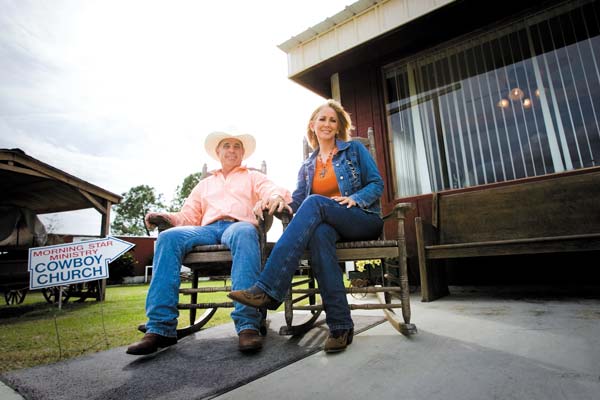 With the support of his wife, Debbie, Mark built the Morning Star Cowboy Church in Leesburg with trees felled by the hurricanes of 2004.

Mark’s face lights up as he remembers the experience, just like when he preaches. His heartfelt messages help many others get through their personal storms, figuratively and literally.

“Mark always was saying, ‘Someday I’m going to build a chapel,’” Debbie reminisces. “He would bring home huge trees from the hurricanes and dump them in burn piles.

Less than a year after the Morning Star Cowboy Chapel was completed, the attendance grew so much that Mark had to add on another section. The cook shed remained a place for friendly gatherings and chili cook-offs.

Debbie’s 25 years of hospitality industry experience is evident on the property, where her landscaping is a work in progress. She’s also the song leader for the congregation. Mark’s background in building and air conditioning also makes for a comfortable place of worship.

“I didn’t build this chapel for God,” Pastor Mark said at a recent service.

The confusion eases when he explains with a smile, “God is where the weather is perfect all the time! But we’re down here in Florida. I built this chapel for God’s people to be comfortable.”