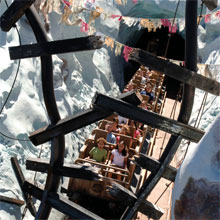 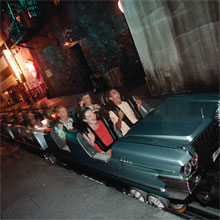 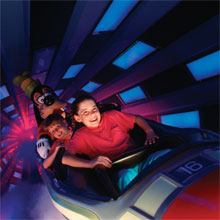 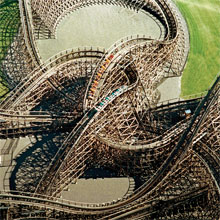 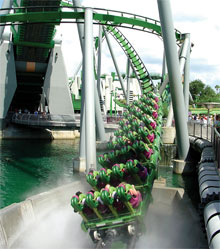 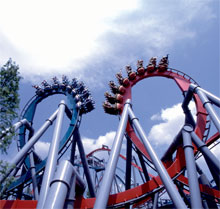 Those teeth-rattling, gut-churning, high-speed machines called roller coasters come in all shapes and sizes. There are the tall steel intimidators, with plenty of steep hills and heart-rate-boosting inversions, and then there are the family-friendly coasters that even a 5-year-old child can hop aboard without trepidation.

According to the International Association of Amusement Parks & Attractions, 335 million people visited U.S. amusement parks in 2005. And guess what the top draw is? Roller coasters! A two to three-minute escape — where nothing matters but speed and a perceived sense of danger — provides a sought-after adrenaline kick. And Central Florida residents are lucky because they live among America’s most famous theme parks and their equally famous roller coasters that are open for business year-round.

Walt Disney World is the kind of place where you would expect to find great roller coasters. After all, the entertainment giant gave us some of the first innovative coasters in the 1970s with the introduction of Space Mountain and Big Thunder Mountain Railroad. These two terrific coasters have kept baby boomers and their offspring riding for decades. So, as summer, the season for unveiling new rides, approaches, all eyes are on Disney as the curtain rises to reveal: Expedition Everest.

Keeping in the true Disney style, the coaster, which debuted at Disney’s Animal Kingdom in April, takes guests on an adventure — a mountain climbing expedition in Nepal.

Before boarding the runaway train, guests walk through a mythical village at the base of Mount Everest. Prayer flags, shrines, carved totems and native trees were carefully selected by Disney’s creative team after months of research in Asia to make this re-creation of a Himalayan village as authentic as possible. They even built a museum to showcase artifacts of Nepalese culture, and photographs of doomed expeditions and the “existence” of the Yeti (a.k.a. The Abominable Snowman).

Once on board, the intrigue builds as the train climbs toward the summit. A gnarled dead-end track, evidence of the Yeti’s fury as he defends the mountain from unwelcome visitors, sends the train spinning backwards into a dark hole of caverns. You eventually emerge a bit disoriented into daylight, just to plummet 80 feet in a mad attempt to escape the Yeti.

If you’re looking for a high-tech, steel coaster with plenty of speed and upside-down action, then Rock ‘n’ Roller Coaster at Disney MGM-Studios is the ride. This is Disney’s most serious roller coaster, which, by the way, you can’t even see. Located inside a 68,000-square-foot building with an oversized guitar on the outside, Rock ‘n’ Roller Coaster speeds through pitch-black darkness and boasts a G-force of five Gs. The only light along the ride comes from the neon-lit pink and green palm trees, arrows, and Hollywood signs. Blink and you’ll miss them.

Traveling at a top speed of 57 mph in a super-stretch limo, you’re en route to an Aerosmith concert. A specially written soundtrack by the rock group is blasted throughout the ride by an audio system consisting of 120 speakers. On the 3-minute, 12-second ride, the coaster reaches heights of 80 feet and travels along a 3,400-foot-long track that has three inversions, including two rollovers and one corkscrew.

When it comes to family-friendly coasters, Disney’s two darlings — Space Mountain and Big Thunder Mountain Railroad — are classics. Dodging comets and shooting stars, Tomorrowland’s Space Mountain speeds through darkness at 27 mph. The indoor coaster takes turns and drops that passengers can’t see, adding unexpected thrills to the experience. Big Thunder Mountain in Frontierland is a wild ride that leaves folks laughing themselves silly. Set in the gold rush era of the Wild West, the runaway mine train zooms past faux mountains and caverns at 35 mph. The attraction’s details, from rumbling earthquakes to swarms of bats, add to the fantasy. Best time to ride is after dark, when flaming torches create a sense of drama.

For the dead serious, thrill-seeking coaster rider, there’s no better place than Busch Gardens Tampa Bay. Last summer, the theme park added Sheikra to its list, which includes coasters with such exotic names as Montu, Gwazi, Kumba, Python, and Scorpion.

Sheikra, the first double-dive coaster in the United States, plunges 200 feet straight down at a 90-degree angle, followed by another plunge at 81.2 degrees. The coaster boasts a tiered, three-row car, designed to provide a fantastic view no matter where you sit. As the train climbs the first super-steep hill, riders lie on their backs gazing up toward the heavens. At the top, daredevils are definitely in their element as the train slowly approaches the edge. It rests on the precipice, where you can feel yourself slide forward in the seat. Yikes!

After dropping 13 stories, you’re hurled through an inverted vertical loop at 104 feet, followed by a dive into an Immelman, which is an inverse loop, or airplane maneuver, named after a World War II German pilot. The intensity continues as the train travels through two batwings, boomerang inversions consisting of two half vertical loops angled at 45 degrees, and then a 50-foot vertical loop extending below ground level. Were talking 3.89 Gs. One last detail — it’s floorless. So park your sandals at the boarding ramp and let your legs and feet swing through the air.

Since it started rolling in 1993, Kumba has been a hit with experienced coaster riders who queue up over and over again. This quintessential coaster’s track measures 3,978 feet long and 143 feet tall. It travels at a top speed of 60 mph, has an initial 135-foot drop, and boasts seven inversions. One of its interesting features is its camelback – a series of hills where each preceding one is slightly smaller. Kumba’s camelback features a 360-degree spiral.

After Montu and Kumba, one could say Busch Gardens’ Scorpion is for beginners. Back in 1981, this steel coaster offered quite a daring ride; however, dwarfed by its sister mega coasters, Scorpion now looks like the pint-sized sibling, measuring a mere 65 feet in height. But don’t skip the experience, because this arachnid’s speed is right up there with the big guys at 50 mph, and its one inversion makes it a good choice for the slightly wimpy rider. Measuring only 1,805 feet long, compared to its sisters at almost 4,000 feet, Scorpion will be over before you realize you went upside down.

One of the world’s first inverting roller coasters, Python makes a historic statement at Busch Gardens. The yellow corkscrew coaster was built in 1976 during the revolutionary era of the roller coaster. Its design changed the way people thought about roller coasters and what they could do. The Python twists along 1,250 feet of steel track, plummets down a six-story drop, and twirls through a double-spiraling corkscrew maneuver at speeds of 50 mph in 68 seconds.

You want a wooden coaster? Gwazi is the answer. With its impressive intertwining tracks that measure close to 7,000 feet in length, this coaster is the Southeast’s largest and fastest double-track wooden coaster. It took more than 1.25 million board feet of lumber and more than 2 million bolted connections to construct this mammoth ride.

What sets the Incredible Hulk Coaster at Universal’s Islands of Adventure theme park apart from others is its launching system. With a top speed of 67 mph, Hulk is one of the fastest coasters, going from zero to 40 mph in two seconds. The blastoff through the ride’s capsule picks up an incredible amount of energy, shooting you up and out when you least expect it, followed by seven inversions over 3,700 feet of track. Its highest point is 110 feet.

Dueling Dragons, Islands of Adventure’s second coaster, is a rougher, more compact ride. After all, it’s two dragons fighting each other. You choose which coaster you want to ride — red is Fire and blue is Ice. Each one travels some 3,200 feet on its own track. The beauty of this coaster is the five fly-by maneuvers where the trains duel each other as they pass within only feet of one another. At one point it seems that a head-on collision is inevitable; however, the trains manage to pass each other with only 12 inches of space to spare.

The good thing about roller coasters is that each one has its own personality. SeaWorld’s Kraken is the tallest coaster in Orlando at 150 feet. Since it’s a long serpentine coaster with 4,177 feet of track, there’s plenty of room to position seven inversions, a tunnel, and various hills and turns, resulting in a higher comfort level for the rider. The floorless coaster soars to 151 feet, dropping 149 feet and reaching a top speed of 65 mph.

At this beautiful park known for its historic botanical gardens, there are two junior coasters that make the list.

The Okeechobee Rampage is a steel coaster that’s noteworthy because of its left-right swerves, sudden speed bursts, and camelbacks. It reaches only 28.5 mph, making it the perfect family coaster.

Wooden roller coaster fans give a thumbs-up to the Triple Hurricane, a classic-style woodie that rumbles along the track at 32 mph. Lightning-fast hills, negative G-forces, exceptional air time, and plenty of screams make this coaster ride worth the trip.

Patricia Letakis is a freelance writer and avid roller coaster rider who resides in Orlando.