In just a year, artist E.J. Nieves has made a significant impact on the Ocala arts scene. His newest contribution will be his forthcoming art gallery in a Neighborhood Storage facility. Yes, you read that right. 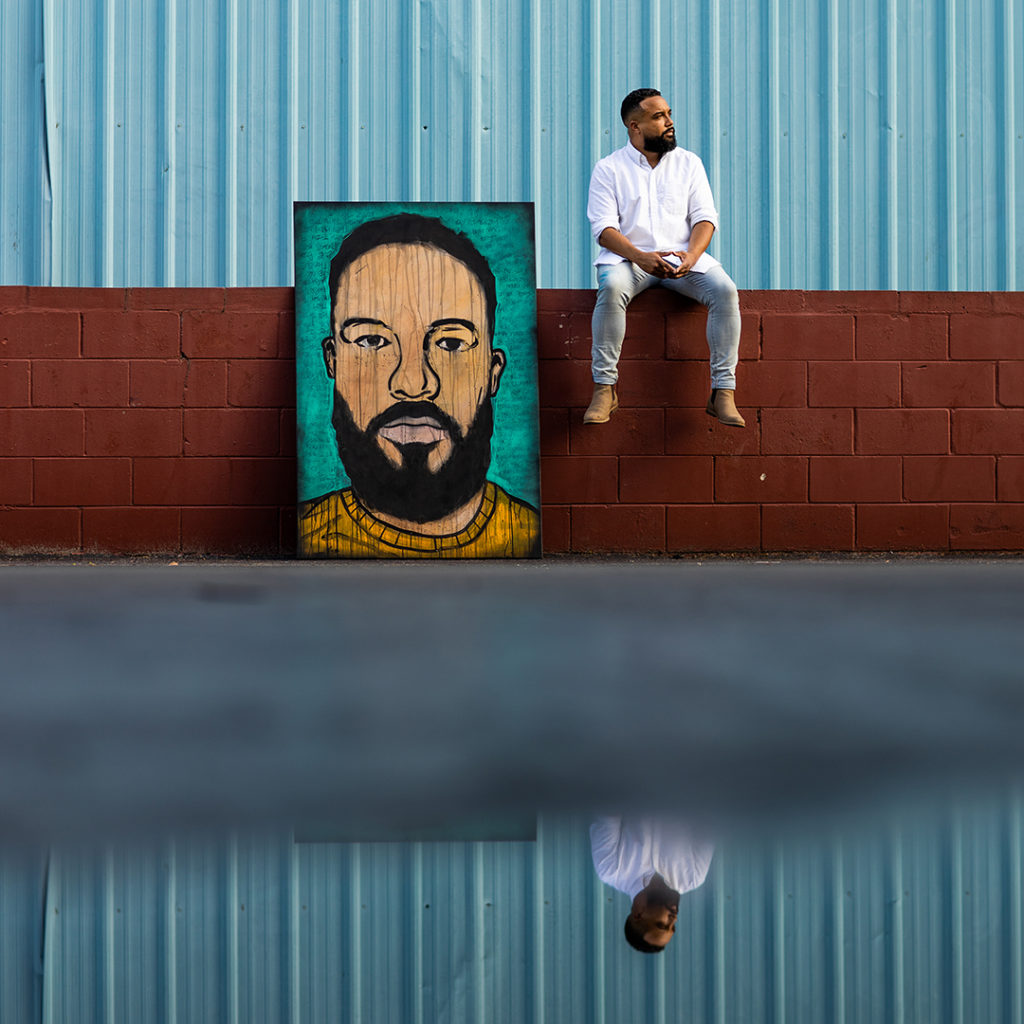 From the studio, one by one, Nieves extracts half-a-dozen 3 feet by 4 feet expressionistic paintings borne of the COVID-19 pandemic, a chaos of our times, and lines them up against the wall of the common area outside his studio. The topic of one is the question of wearing or not wearing a mask, a death skull providing the answer. Going back into the studio, Nieves brings out a bold red, black and white abstract painting and props it up alone on a wall across from the others. The impromptu gallery of expressionistic and abstract paintings perfectly represents two of the many sides to Nieves’ artistry. But it is another piece, not on display this day, that was the wellspring of his art career.

“As a child, I read comic books and my favorite was Spawn, created by Todd McFarlane,” explains Nieves, who grew up in Orlando. “I loved the aesthetics of the bold drawings and the good versus evil narrative told panel by panel. Those comic books sparked my desire to create something, to become involved in the pop and comic culture.”

Nieves began doing pen and ink drawings early on, becoming the cartoonist for his high school newspaper. But after graduating in 2007 from the University of Central Florida with a Bachelor of Arts in graphic design, Nieves still viewed his art as a hobby, not a way to make a living. He worked in various retail management positions for five years until his mother, a longtime Spanish language teacher, encouraged him to go into teaching. Nieves took her advice, first substitute teaching then becoming a full-time art teacher in the Orange County Public Schools district.

“Being an art teacher put me back in touch with my artistic side and I started really doing my comic book art again,” Nieves recalls. “I also started doing the comic convention circuit with my art and I started selling it. It was a revelation. That’s when I thought I could make a living as an artist. It changed my life.”

Nieves stopped teaching in 2017 to pursue his art full time and the high Orlando cost of living sent him looking for a new home.

“I have family in Ocala and had come several times for its comic con,” says Nieves. “I came for a visit, went right to the Marion Cultural Alliance’s The Brick and met Ashley Justiniano, the gallery’s director. She was very encouraging. I joined MCA that day, before I even moved to Ocala. I just got such a great vibe from the Ocala art culture and knew this was where I needed to be.” 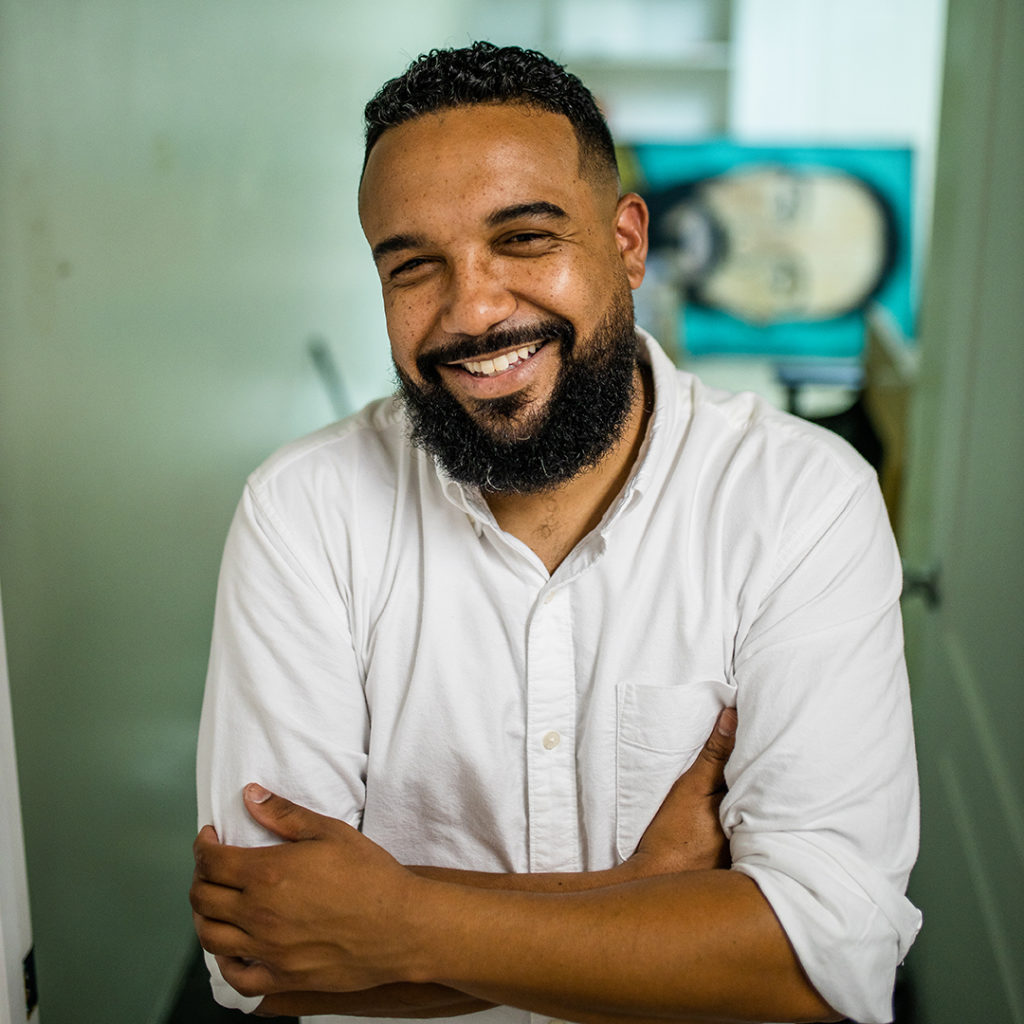 In July 2019, Nieves relocated to Ocala, saying he “couched it for a while at a friend’s house” while he explored his new town. His next major art connections were Xochitl Jacques-Smith, a board member of the MAX, and Jesse James, the co-founder of The Culture Curators.

“Xochitl and Jesse introduced me to so many more people,” Nieves shares. “I moved into the MAX and have been going forward from there. I am so happy doing my art and connecting with the art community. I believe we artists are all in this together.”

To that end, Nieves participated in First Friday Art Walk events, as well as the Neon Dreams art show and #socialdistancing and #COVID19 projects, displaying paintings in the windows of the Brick City Center for the Arts alongside other artists.

Nieves also serves on the Ocala Municipal Arts Commission (OMAC). And Laura Walker, who heads the City of Ocala’s Cultural Arts and Sciences Division, is pleased to have Nieves’ input.

“We are happy to have emerging artists like E.J. serving on the OMAC,” explains Walker. “Artists like him on this commission provide additional perspective to the development of policies as initiated by the Community Cultural Arts Plan. All arts and cultural additions are encouraged.”

Evolving His Art
As far as Nieves is concerned, bigger is better when it comes to his art, whether expressionistic or abstract. 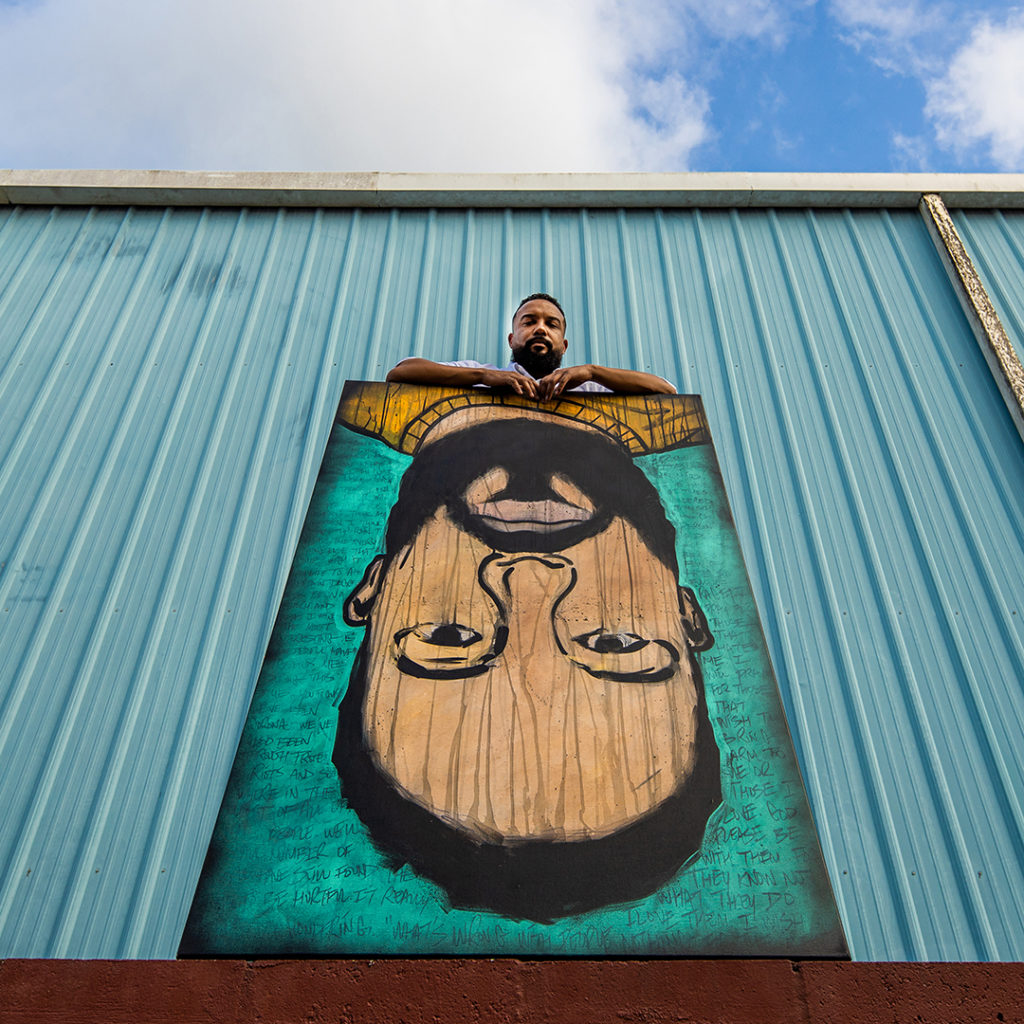 “I love doing large-scale pieces. Right now, most of my pieces are 3×4, but I plan to double that size,” he says. “My expressionistic art is conceptual, usually based on a current affairs topic, maybe an event or even just a pop culture phrase. They usually include wording to push the idea. These pieces tell a narrative canvas-by-canvas, like the panel-by-panel storyline of comics.”

Nieves switches creative gears when it comes to his abstract work, which he describes as “all about energy; energy meeting energy.” Having picked out his palette of colors, he lays down his canvas on the floor and throws cups of paint across it “in bowling motions, letting the energy of the piece guide the movement of the colors.” He then stands over the piece and adds drops of paint, again going with the energy flow.

His abstract approach is similar to his connectivity to the community, especially through social media, where he has become a popular local influencer. That idea of “energy meeting energy” is present not only in his own posts and videos, but also in the time he takes to comment, repost and offer praise and celebratory messages. He is a master at becoming an essential part of the dialogue and networking with the community.

Popular singer, entrepreneur and curator of such arts projects as Couch Sessions and Hidden Spaces, Olivia Ortiz praises Nieves for his ability to connect.

“He’s really good at networking,” she asserts. “Social media is such an important aspect of being an artist these days. I am always trying to encourage the artists I work with to be more active on social media.”

And lest you think this superhero of social media has abandoned his comic book art, think again.

“Oh, I will always do comic book art. It is my heart,” he says unabashedly. “I’m working on pieces now for the Collective Comic Con in Jacksonville on July 17th through the 19th.”

Nieves is also taking another big step in his progression as an artist by opening his own art gallery in a self-storage workspace. 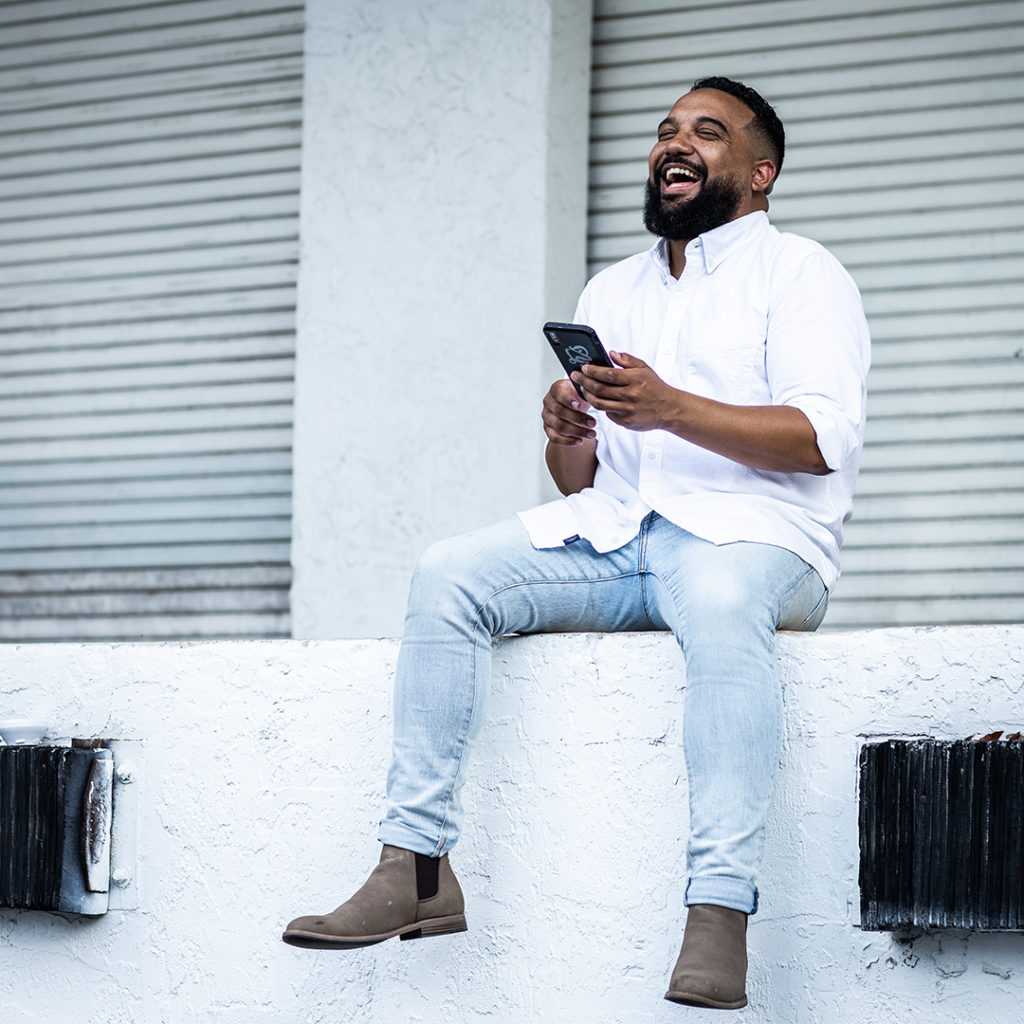 “I talked to Seth Benzel who has 8th Ave. Gallery and he encouraged me to open my own gallery,” Nieves recalls. “The actual storage unit facility is right behind the workspace buildings, where 8th Ave. Gallery and my space are located. I think there is a real opportunity to build an art community there. I don’t see each artist as being in competition with other artists. I believe the tide rises all ships and together and we can thrive as artists.”

Nieves’s gallery, which will open in August, is called N.E.H.S. Gallery, with the initials standing for “No Eye Has Seen.” A Christian, Nieves based his gallery name on a Bible scripture: “No eye has seen, no ear has heard, no mind has imagined what God has prepared for those who love Him.”

For the opening of his gallery, Nieves painted his second ever self-portrait, a striking, unadorned 40 inch by 60 inch painting, featuring him staring dead on at perhaps life’s camera.

“In my 20s, I painted a self-portrait and named it The Calm Before The Storm because I was still struggling with wanting to do my art and make a living,” says Nieves, now 36. “This new one is called The Storm. In my eyes, you see the calm focus at the center of a storm. I want it to represent where I am in my art career now. While I’m glad to finally be at a good place with my art, I am not complacent and will continue to move forward with focus. I still have lots of work to do, plenty of creativity still to come.”

No doubt amid a little chaos.

For more information and gallery announcements, visit The Art of E.J. Nieves on Facebook. Gallery visits by appointment only. Send requests to theartofejnieves@gmail.com