Meet some area residents whose unusual pets are truly members of the family. 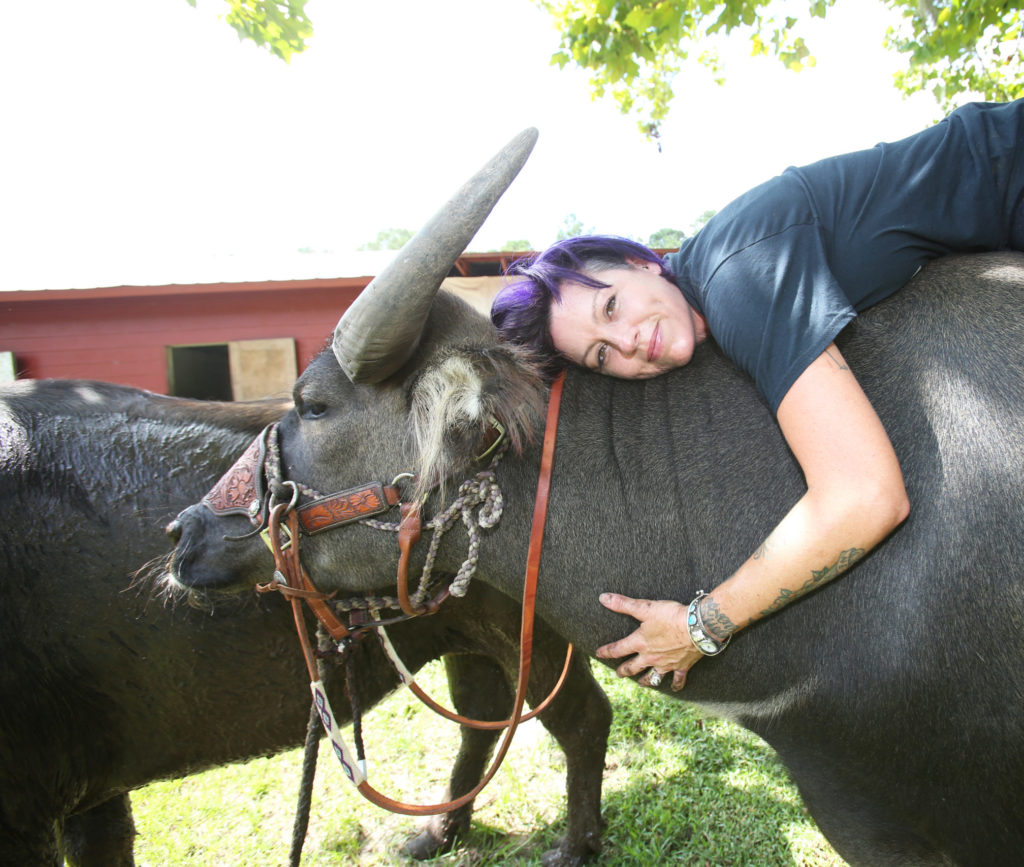 After she had a bath and was told to be a good girl for 10 minutes, until it was time for her photo shoot—Patty, much like a rambunctious child,
instead waded into a favorite mud hole and wallowed in cool abandon.

Edwards, along with her partner Shane Kuhn, are “parents” to Rice Patty and Banjo, a male Asian water buffalo.

“Banjo was given to us by Tim and Patty Rivers,” Edwards explains, referencing the well-known exotic animal trainers based in Citra. “Shane had one of theirs [water buffaloes] before as well.”

“They had him for years and I used him to trick rope on him,” Kuhn says of his first exposure to water buffalo. “I used him in rodeos and always wanted another one.”

“Basically, they gifted him to us,” Edwards offers, speaking of Banjo.

The couple has had Banjo for two years and has brought him to local events such as the Farmland Preservation Festival.

“With Rice Patty, I was cutting hair about a year ago,” notes Edwards, who owns the Stinky Flamingo Salon and Boutique in Shiloh, “when Kelly Rick, down the street, who is a vet tech with the University of Florida, called and said someone was giving away a water buffalo. They followed me online and saw that we had one that loved us, so we got her.”

“When Banjo and Patty saw each other, it was like they were in love,” she remarks. “They had never seen another one.”

“That’s why water buffalo dairy products are pretty expensive, because they can’t reproduce and start milking until they’re 6 years old,” he explains, adding that one such delicacy is mozzarella cheese. 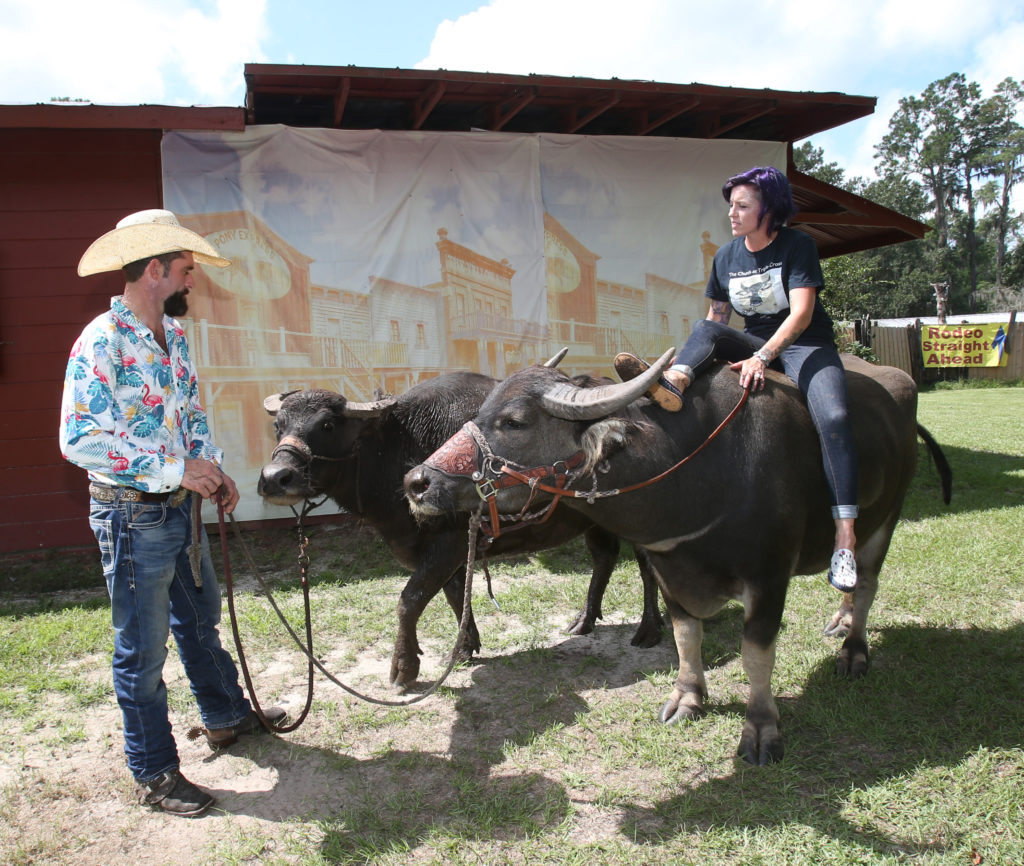 He says he has seen photos from the 1800s that showed water buffalo pulling carts in South Dakota, so he knows they have been in America for some time, perhaps arriving with immigrants coming to work on railroads.

“If they are domesticated,” he offers, “I’d say they are tamer than a horse.”

In terms of training enticements, Edwards says they respond best to “petting.”

“They get jealous,” Kuhn offers, commenting on Banjo’s behavior as our photographer paid attention to Rice Patty in the mud rather than him standing nearby. “They want to be part of what you are doing.”

With tongue in cheek, or perhaps not, Kuhn offers that Banjo, “Banjo the Famous Water Buffalo” chimes in Edwards, can do “predictions,” such as guessing the gender of a baby, and also
“takes confessions.”

“He’s done a couple of weddings,” says Edwards. “They both have, with the bride on one and the groom on the other for photos.”

The animals are members of the species that includes yak and bison. The life expectancy can range to 25 years. They can range in size from 1,500 to 2,600 pounds. According to a National Geographic article, “Water buffalo have been domesticated for more than 5,000 years. Wild water buffalo are at-risk and live only in a small number of protected areas in India, Nepal, Bhutan and Thailand.”

As with their counterparts around the world, Banjo and Rice Patty love to head into their pond, where they fling mud onto their backs to ward off bugs and cool off.

“They can just lay there for hours,” Edwards says, “and it’s fun to come sit with them and talk to them.”

As the couple look over their buffalo, Honey, a miniature Australian shepherd, wades into the pond.

“She thinks she’s a buffalo,” Kuhn offers, adding that Honey also likes to grab onto to Rice Patty’s rope and “lead” her around the property.

The couple also have a number of horses, four other dogs, a donkey, a pair of love birds and a scarlet macaw.

A few miles to the southeast, Katy Maclachlan has a menagerie more like that of Noah’s ark, with some of the animals becoming pets due to the pandemic and others through “foster failure.” 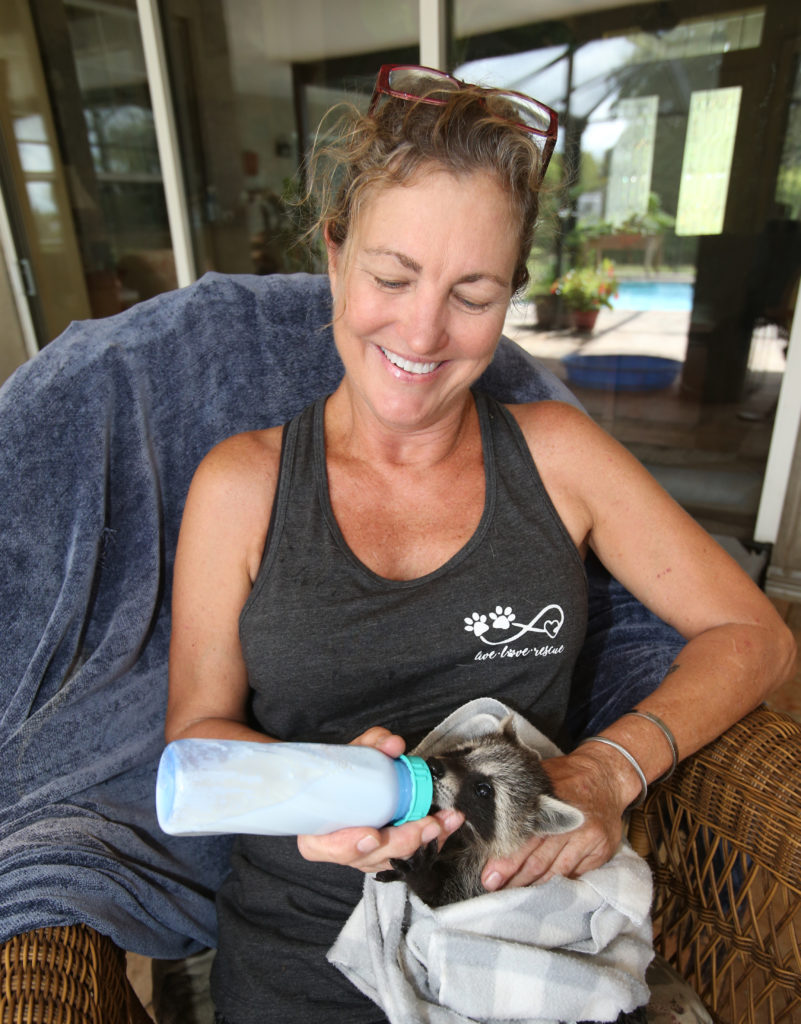 Her brood includes an African spurred, or sulcata, tortoise; an African bullfrog; a juvenile peacock; a flock of chickens and roosters; a sugar glider; two macaws; two snakes; three ferrets; five dogs; and seven horses. And that doesn’t include the wildlife she rehabilitates for release into the wild, currently five baby raccoons and a baby squirrel.

Maclachlan, who was born in Chicago, moved to Boca Raton in 1969.

“My first rescue, I was riding my bike home from school and I saw somebody hit a duck,” she offers. “I picked up the duck and went home and got in trouble, but saved the duck. And I’ve been doing it the rest of my life.”

She had horses early in life, then lived on a sailboat for seven years so had to give them up. She moved to Ocala in 2000 and devoted her time to her two young sons before she got horses again.

In 2019, she became one of the organizers of Homeward Bound Horses and Hounds Rescue, Inc., a registered 501(c)(3) nonprofit.

“We do cats and dogs, but we also take in horses and donkeys and exotics,” she explains. “We do the whole gamut of reptiles, and pretty much anything that you don’t have to have a state license to own. I had the ferrets and sugar glider when the pandemic hit. Well now I love them, so they’re part of my family.”

The ferrets, Sinbad, Seiko and Sable, love to romp and play, turning flips and disappearing into the crevice of a cabinet.

“They are very funny,” Maclachlan offers. “They are fairly common, but they have an odor like any weasel or skunk. They don’t spray like a skunk, but are messy.”

The tortoise, Madagascar, or “Maddie,” is 3-years-old and small, but will top more than 100 pounds when fully mature. 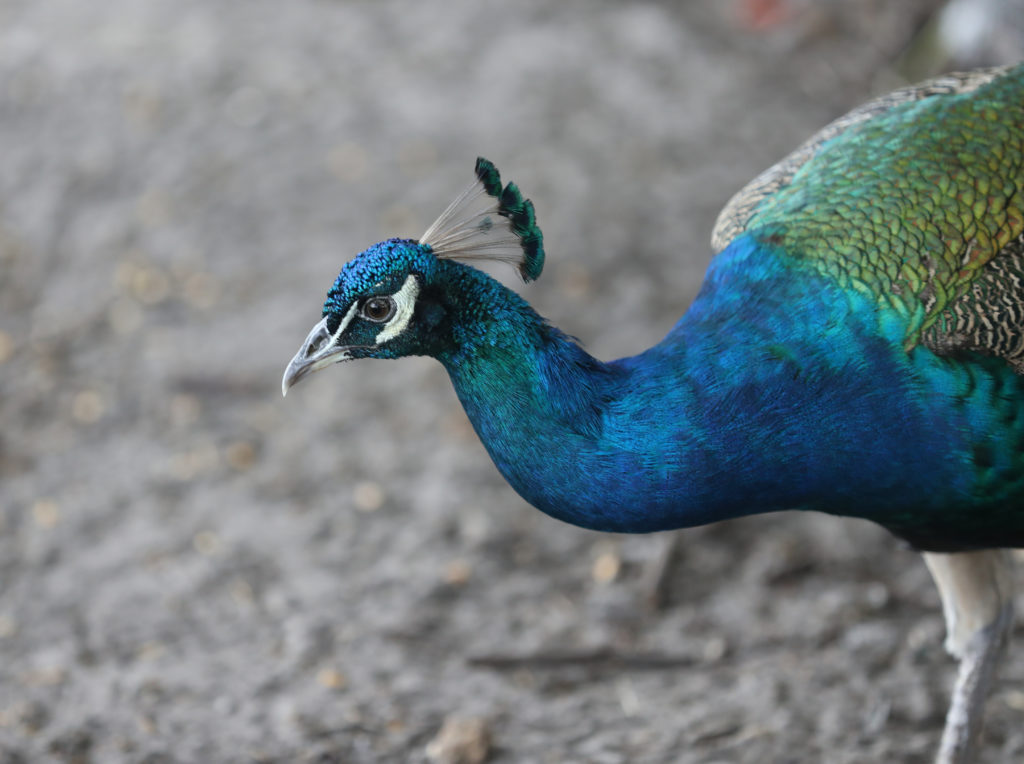 The gorgeous blue male peacock, named Latif, is very young and doesn’t yet have enough plumage to make the signature tail fan.

The African bullfrog, which weighs about a pound, has teeth and feeds on mice. His rotund appearance led to his name, Jabba, as in Jabba the Hutt from the Star Wars movie franchise.

“Somebody in Orlando didn’t want him anymore,” Maclachlan offers.

The macaws, a blue and gold male named Chico and D’jango, a green wing female, respond to hand signals, lifting their feathers when Maclachlan gives the sign.

Jasper, the sugar glider, who is nocturnal, is not happy when Maclachlan opens the small plush sack in which he is sleeping. Uttering a chattering chastisement, he turns upside down to burrow back into his sleeping quarters.

With the baby raccoons, Maclachlan brings them to good health by bottle-feeding, then has to reverse course and break them from the habit. She begins by adding baby cereal to the formula, along with hard-boiled egg, berries and grapes. They then spend time in an outdoor enclosure learning to forage before they are released into the wild.

As for her dogs, “they are dogs I fostered that I decided I just couldn’t live without,” she explains, letting loose a hearty laugh. “We call it foster failure!” Four of the canines are mastiffs and she also has a Labrador retriever and Rhodesian ridgeback cross.

The horses in her care are permanent residents; some having come from situations where a senior citizen could no longer care for them, or they were injured or unwell.

“I provide a forever home for them,” she states, “kind of like a retirement home.”

“We are part of the VOCAL food group, which is a godsend,” says Maclachlan, who volunteers one day a week with the Voices of Change Animal League rescue group. In turn, she offers local students an opportunity to gain experience with real world issues and an understanding of the work performed by animal rescues, as part of volunteer programs administered by area schools.

When asked if there is any animal she will not handle, Maclachlan opens wide her sky-blue eyes and says with affirmation, “No!”

The Florida Fish and Wildlife Conservation Commission oversees licenses and permits for wildlife and captive wildlife. Learn more at www.myfwc.com/license/wildlife