The Across the Universe star put on a strong, emotional performance during Ocala’s Levitt Amp Music Series. 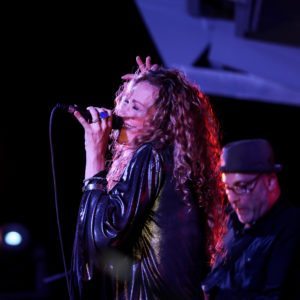 Dana Fuchs—you may know her as Sadie from Across the Universe—lit up the stage at Webb Field on Friday, June 16. She was the headliner for the fifth concert in the Levitt Amp Ocala Concert Series.

Dana grew up in Wildwood, FL, and she considered this as close to a homecoming as she’s ever had. Both of her parents have passed away, along with all of her siblings save one brother. She’s traveled a rough road to fame and success, and, throughout her performance, she referenced many of the heartaches and emotions she’s experienced.

But it didn’t dampen her performance in the least. In fact, it made it all the stronger. For Across the Universe fans, she could still belt out that strong, passionate voice she displayed in the film a decade ago, and one of the last songs of the night was her famous “Helter Skelter.”

The City of Ocala won a grant for the summer music series last year, and after winning, 10 free concerts featuring nationally recognized artists were set up. There are three remaining concerts of differing genres, one happening each Friday. Don’t miss these upcoming shows: