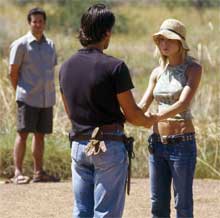 Ocala native Marissa Clark has big plans for a Hollywood career — her latest endeavor began with an unexpected trip to the Australian wilderness in TBS’s new reality show, Outback Jack.

Marissa always considered herself an “outdoors” type of girl. Of course, nothing could have prepared her for the experience she was about to endure during the filming of TBS’s first reality series, Outback Jack.

While living in New York City to pursue her singing and acting career, the 23-year-old Ocala native was approached by a casting director for the new show. Initially, she turned down the offer to interview for Outback Jack, deciding she wasn’t interested in a reality series.

“The producers approached me three times before I finally decided to give it a try,” she says. “It seemed like a really fun, spontaneous thing to do.”

Going into the show, the girls donned beautiful evening gowns and were whisked away to a mansion in Los Angeles, where they believed they would be staying. Instead, the show’s host, JD Roberto, greeted the ladies and announced they would be flying to the Australian Outback to parachute out of an airplane to meet Jack.

“I was in denial I think,” Marissa says. “It was very exciting, but we were all wearing gowns, so it was awkward. We thought we would get to live in a great mansion and have wonderful, romantic dates with Jack. We quickly realized we were very wrong.”

As a matter of fact, the living conditions in the Outback were anything but luxurious.

“We had a loo, dirt tents, and a pump shower that only pumped cold water,” Marissa says. “We had no televisions, computers, or radios. There was no contact with the outside world during filming.” (Not to mention the extreme heat, huge bugs, poisonous spiders, and crocodiles that call the Outback home.)

Now that the reality of this reality show had sunk in, the contestants got down to the business at hand — competing for Jack’s attention.

And Marissa did just that during their first challenge when she had to be taken to the medical tent during filming after suffering a bout of heat stroke.

“We had to climb up a mountain and there was no water or anything,” she says. “I really thought I might die in the Outback. I had an erratic heartbeat and they gave me IVs. It was very scary.”

Once her health improved, Marissa joined the other contestants for the following challenges. Episode two found the girls fishing with their bare hands.

“Whoever caught the most fish got to spend some quality time with Jack along with three other girls of her choosing,” Marissa explains. “I caught two fish, but Adrienne caught three. Those of us who weren’t chosen had to gut and cook the fish for the ones who were. It was disgusting.”

Unhappy with the lack of time she had to spend with Jack to that point, Marissa chose to sneak away for a moonlit walk to his tent and an intimate moment. One avid viewer of the show feels very strongly about Marissa’s actions.

“I hope the girl who went to Jack’s tent after all the other girls went to bed gets the boot,” Jennifer posted on a Yahoo message board for Outback Jack fans. “The whole point of the show is for the girls to compete for Jack’s attention.”

Even more than the grueling competitions and tense eliminations, Marissa found it hard to cope with the obtrusive television cameras that, at least initially, recorded her every move.

“They’d be there when I was brushing my teeth,” Marissa recalls. “But, after a while, I stopped noticing them and went about my business.”

As with most other reality shows, each week the contestants find one of their own being sent home, and Outback Jack is no different. On the third episode, the girls (instead of Jack) had the opportunity to decide which contestant to eliminate. Noticing Jack’s interest in Marissa, the other contestants quickly voted her off — or so they think.

Before “leaving” the show, Marissa was informed that she was going to be a “boomerang,” and that she would reappear on Outback Jack soon. Unfortunately, since the show is still airing on TBS, Marissa couldn’t give away any details about what might happen in upcoming episodes, but you can bet we’ll be watching!

“The best part of the show is that they’re going to bring Marissa back,” Debra from North Carolina says. “Jack is there to find someone that suits him and he really liked Marissa. It wouldn’t have been fair to let a pack of jealous women send the one person home that he has the biggest connection with.”

Since production ended for Outback Jack, Marissa has appeared on Entertainment Tonight for the first time and has moved to Los Angeles. Despite moving 3,000 miles from Ocala, her local roots still run deep. Still living in the area are her father, Sherman; her siblings, Adrianna and Nolan; and her mother and stepfather, Mary and Al Burel.

“Ocala will always be home,” she says, “but I’m very excited about the future. I’m going to make a name for myself.”


Describe yourself in one word: Tenacious

Most outrageous thing you’ve done for love: I spent my entire paycheck on a gift — just because.

Date pet peeves: Leaving the toilet seat up and someone that is disrespectful.

What do you expect to get out of the show? I would like to meet someone special that shares the same qualities and interests that I do.

Accomplishments: winner of the John Handy Triathlon, took part in the Marathon at Timbertop

Size: a million acres in northwest Australia, larger than all of Great Britain