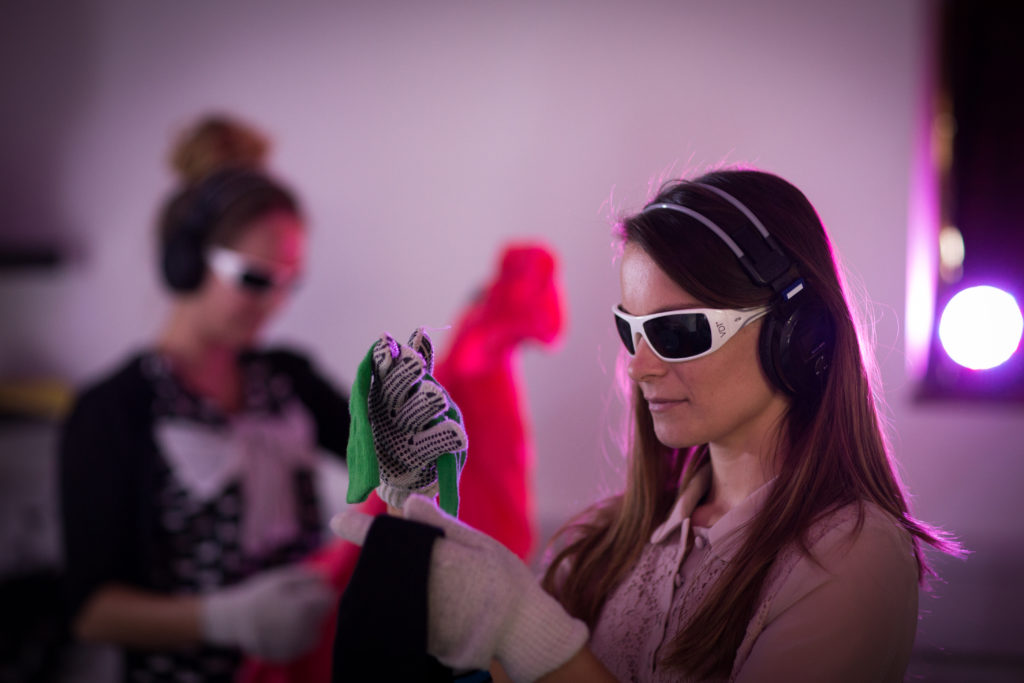 Hospice of Marion County is offering the community a virtual experience that simulates the struggles of those living with Alzheimer’s and dementia.

To walk in the shoes of someone living with mid-stage dementia is a rare opportunity, but the disorienting experience is an extremely valuable one.

Those who experience it call the Virtual Dementia Tour (VDT) “life-changing” and “mind-blowing.” Many are moved to tears. All walk away with a better understanding of the challenges so many of our senior citizens face on a daily basis.

The evidence-based dementia simulation training developed by Second Wind Dreams is now being offered free to anyone in our community by Hospice of Marion County (HMC).

With an estimated 13 percent of Marion County residents 65 and older diagnosed with Alzheimer’s disease and an unknown number living with other forms of dementia, according to the Department of Elder Affairs, many of us will know someone diagnosed with these diseases, whether our own parents, a loved one or a friend.

“Because there’s going to be an ongoing mass influx of people living with dementia and Alzheimer’s, the more people who understand it—whether you’re a server at a restaurant, a doctor or a caregiver—the better you can serve those people living with dementia,” says DJ Ryan, RN, the community education liaison for Hospice of Marion County and a certified VDT facilitator. “Once you have a better understanding, you have a better understanding of how to care for them, how to respond to them and how to better interact with them.”

Walk in Their Shoes

Even after 25 years in nursing, including working in a memory care unit, Ryan says he was “blown away” by his own first experience with the sensitivity training, in which participants are equipped with headphones and specialized glasses, gloves and shoe inserts to simulate the cognitive, auditory, sensory and motor neural symptoms that affect those living with dementia.

The virtual experience helps people understand that dementia is much more than a memory problem, Ryan explains, adding that, by mid-stage dementia, at all times at least two parts of the brain are affected by this progressive, terminal disease.

“It’s a total brain malfunction,” he says, explaining that, by mid-stage dementia, a person misses about every fourth word said to them because the brain is struggling to process auditory input. They’re not able to filter out distracting background noises. Their vision is impaired because of a restricted field of vision, they likely struggle with depth perception and their brains require more light to process visual data. And, of course, they have trouble recognizing faces, people and objects.

The physical symptoms of Alzheimer’s disease and dementia can also be a source of great pain and discomfort, adds Lanie Shirey, the HMC director of marketing and a certified VDT facilitator. Those living with the diseases often suffer sensory deprivation and limited dexterity, which can limit fine motor skills in the fingers and can affect their ability to walk comfortably and safely.

“You’ve got auditory input affecting the brain’s functioning. You have visual deficits affecting the brain’s functioning and then you have tactile, sensory, comfort. Your brain tries to make sense of each of them as they occur,” she notes. And, she adds, folks living with dementia often don’t have the ability to verbalize that they’re feeling pain, whether it’s arthritis, sore muscles or a headache, so they’re often suffering silently with distracting discomfort.

“Once you go through this, you’re going to come out with a complete 180 degree of what you perceived Alzheimer’s and dementia to be like,” Ryan says. “You’re going to experience them.” 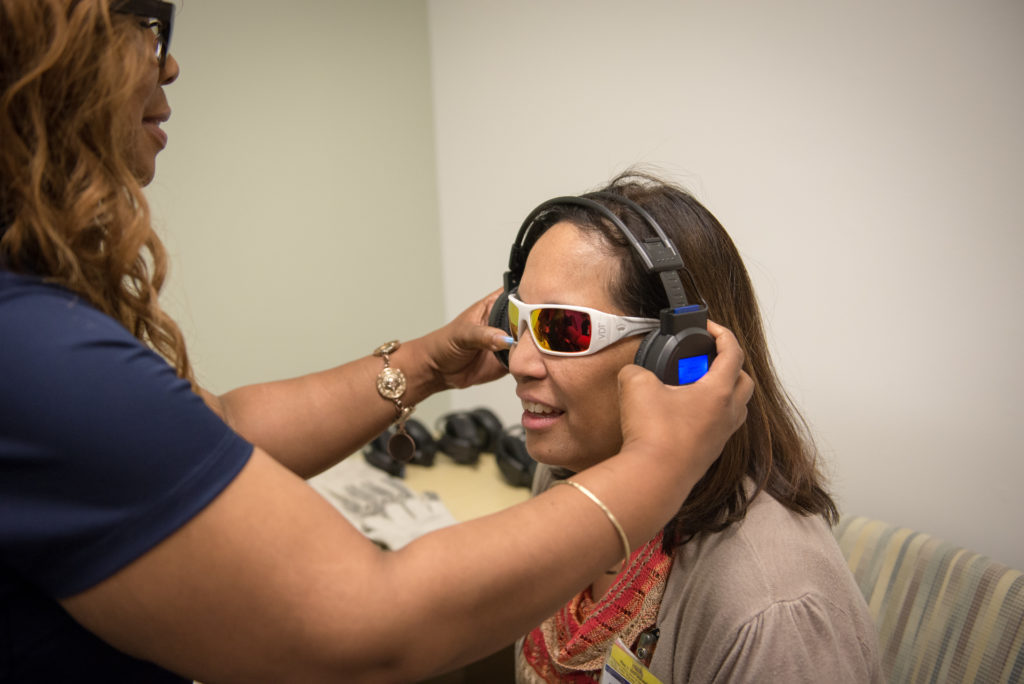 Over the past year, nearly 400 people have taken part in the VDT through Hospice of Marion County. About half were staff from assisted living, memory care and long-term care facilities and the other half were community residents, many of whom are caring for a loved one living with dementia.

“Recently there was a gentleman whose wife is deep in the throes of Alzheimer’s and dementia and, because of this workshop, he burst into tears during the debrief and said, ‘Wow, you have no clue how after today I will be a better caregiver for my wife.’ And that’s priceless to us,” Shirey reveals.

“Everyone says that,” Ryan adds. “The ones who attend all say they’re a better caregiver because of it. The other day, someone said, ‘I will never ever be rude to an elderly person ever again. I will have more patience regardless of the circumstances.’ Because you don’t know who has dementia, you don’t know who has early stage. Late stage is pretty obvious. But early to mid-stage, these are folks who are walking, shopping with their loved ones, going to restaurants with their loved ones, participating in life, and you never know where you’re going to run into them.”

The VDT is offered as a stand-alone experience and also as part of HMC’s quarterly caregiver workshop, which routinely is filled to capacity with 10 participants. The goal, Shirey says, is eventually to offer the workshop five to six times a month.

One HMC volunteer has made it his personal mission to expand dementia education in our community. John Renyhart lost his beloved wife of 55 years, Nancy, in April 2020 after a nine-year struggle with Alzheimer’s disease. As her caregiver, Renyhart calls himself a “grateful recipient of hospice care” because of the medical services they provided for his wife, the caregiver support and respite care they provided to help him and the ongoing grief support they offer. After her passing, Renyhart not only volunteered as a greeter at The Cates House, as a caregiver support facilitator for a group at Ocala Palms Golf & Country Club and as a member of HMC’s philanthropy committee, he also set up The Nancy Renyhart Endowment for Dementia Education.

“After my wife’s passing, I wanted to do something to memorialize her,” Renyhart says. “I know how important education was to me and I want to make sure it’s available to other people.”

Even with his personal experience, the VDT was “eye-opening,” he says, “because that helps to get people conditioned, to get people to be more empathetic, more understanding, what it’s like when you have an encounter with someone with dementia.”

Renyhart’s hope is that the endowment will eventually support a full-time dementia educator. Donors can make tax-deductible gifts to the fund through HMC and Pinnacle Retirement Advisors is sponsoring a golf tournament at Ocala Golf Club on November 5th with a goal of raising $20,000 for the endowment. Both Renyhart and HMC staff look forward to being able to expand dementia education services in Marion County.

“As the community hospice, we feel this is our responsibility,” Shirey says. “Every 65 seconds, someone in this country is newly diagnosed with Alzheimer’s or dementia. It’s an honor and a privilege for us to provide this. We can make a significant difference in other people’s lives, and that’s priceless.”

To register for the VDT or the caregiver workshop, email DJ Ryan at dryan@hospiceofmarion.com or call (352) 857-7644.

The Virtual Dementia Tour, created by P.K. Beville, is a scientifically proven method of building a greater understanding of dementia through the use of patented sensory tools and instruction. Proceeds from the sale of the Virtual Dementia Tour support the work of Second Wind Dreams, an internationally known nonprofit dedicated to changing the perception of aging through the fulfillment of elders dreams.