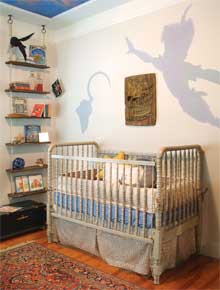 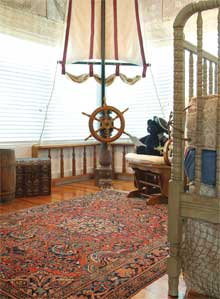 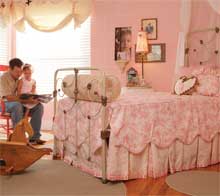 Peter Pan has returned and can be found in the Ocala home of Richard and Patricia Joyner. Even Captain Hook would be impressed with their infant son’s nursery that plays on the theme of the famous literary character, albeit with a nod to the nautical.

“I wanted this to be different from the usual nursery, so it was something he could grow into,” says Richard, owner of Richard Scott Home Collection.

And different it is. The ceiling is a vibrant sky blue with two brass antique maps peaking out from beneath fish netting. A nearby corner holds a ship’s sail complete with a steering wheel and a rustic iron mast. Collectibles can be found on a wood-and-rope ladder that hugs a neighboring wall, along with a pirate’s hat and black crow. Mr. Pan himself is painted in a light blue shadow, protecting the French provincial distressed crib.

But this room didn’t break the bank. Richard’s expert antique hunting found several treasures among the trash. A barrel-turned-toy-bin was found at a local market for $10.

“I found the crib for sale by a produce stand for $25,” adds Richard, “It just needed a little TLC and a fresh coat of paint.”

While taking in the clever nursery, it’s clear to see that no space is left unnoticed. The window treatments, in keeping with the pirate theme, use a wood grain design for the faux roman shade valance. Even the crib’s bedding has a rope with grommets. A ship’s bell is hung next to the crib to alert mom and dad when they need to come on deck. It’s a nursery fit for a little boy. One that hopefully, like Peter Pan, won’t grow up too quickly.

Next door is big sister’s room, a study in both whimsy and femininity. Custom pink walls are painted with faux white blocks and hint of a castle fit for a princess.

The windows boast pink French Toile curtains while the luxurious silk bedding adorns Patricia’s iron bed that she had as a child. A gauze canopy is attached to the ceiling over the bed. Richard pays homage to personal history by using a classic framed portrait of ballerinas that came from his mother’s home. Even the doors are elegant, painted in a rich black gloss with brass doorknobs.

Another great find of Richard’s is a cherry dresser he literally set inside the closet for a custom feel.

The finishing piece? Six spherical rugs shaped like lily pads for a princess and her frog prince. Nearby, silk butterflies dangle from the ceiling over the reading area.

Richard is quick to give credit to his painter and artistic partner, Beaver Bryant of Bryant’s Wall Covering, for realizing what was in his mind.

“He knows my vision,” Richard adds. “Everything we work on together is fabulous.”

Richard likes the fact that both rooms, while beautifully decorated, remain fun.

“A room doesn’t have to be perfect,” he concludes. “Every piece tells a story.”