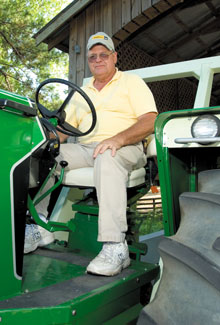 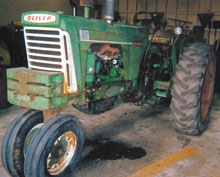 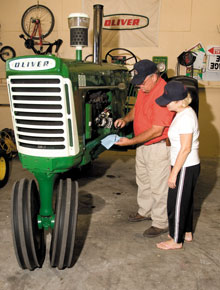 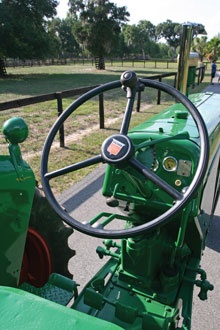 Ocala equine veterinarian Michael Lokai thinks he has his hobby under control.

“It’s a sickness,” says Michael of his relatively newfound diversion of restoring antique tractors. “But not an obsession.”

Michael, who with his wife Jane, owns Central Equine Hospital, traces his rekindled fascination with John Deere and Oliver tractors to his heritage.

“I was raised on a dairy farm in Urbana, Ohio,” he says. “And we had those models, along with Case and Ferguson.”

But it wasn’t until a trip to a south Florida antique tractor show in 2004 that he decided to make it a hobby.

“It’s diversion from everyday routine,” says Michael, who usually spends a couple of hours in the evening working on his tractors in the combination shop and storage shed behind his northwest Marion County veterinary hospital.

Michael’s first purchase was a John Deere B, which required minimal restoration. Located in Ohio, the tractor was later sold it to a North Carolina collector.

His first serious restoration involved an 880 Oliver, circa 1960, which he found for sale on the Internet website, www.yesterdaystractors.com. He and wife Jane, who also shares his love of old tractors, took a five-day weekend, driving out to White Cloud, Kansas, to pick it up and trailer it back to Ocala.

“It was pretty much as I expected,” he says of the tractors rather sad condition. But it met his criteria – it ran.

The project, which required stripping the tractor down to its frame, took months to complete. At times the work threatened to become all-consuming. In addition to the physical labor, he had to search for and order replacement parts. In the end the tractor with its gleaming green paint job, looked like it had just rolled off the assembly line. Earlier models of the tractor sported a rather garish green, yellow and red color scheme.

It took a couple more major restorations, including a 1954 Model 861 Ford tractor for a friend, before Michael decided it was more practical to buy and sell either fully or nearly fully restored tractors then to restore them from scratch.

As an investment, Michael says he pretty much breaks even on a restoration.

To date Michael has owned 11 tractors.

“I have a limited-sized barn,” he says. “If I want another tractor, something has to go. I’m not going to collect them indefinitely.”

Michael is not into letting his restored tractors sit idly in a barn. He still uses them to mow the fields around his facility, to take to parades or on hayrides.

“I don’t want a collection where you go around wiping the tractors off all day long,” he says.

But restoring tractors is only half of Michael’s story. Entering them in tractor pulls around the state and in South Georgia is what he enjoys most.

“It’s the two minutes of pride you have going down the track,” he says, “and the challenge between you and the sled.”

The sled is equipped with a sliding weight that moves forward and applies a downward pressure. It creates friction, which forces the rear tractor wheels to lose traction and spin out.

While conceding he has done well at such shows, Michael deflects questions about trophies or prize money.

“You do it for the love it. You can’t melt down a trophy and get fuel out of it.”

Ocala hasn’t seen a tractor pulling since the 1980s. But that’s about to change. Michael and Jane are spearheading plans to hold a charity show at the Southeast Livestock Pavilion in 2008 to benefit the Red Cross. February 8-9 have been set aside for the two-night event, which is expected to bring more than 100 pullers from around the country. The admission will be $10 for anyone over six years old.

“There will be everything from garden tractors to pickup trucks to turbos to farm tractors,” Michael says.

Michael also hopes to get the Florida Antique Tractor Club, in which he is a board member, to participate in Ocala’s next Christmas parade. If parade organizers accept his proposal, he says the public will get to see quite a cross section of different kinds of tractors.

Michael’s advice for those thinking about getting into the hobby: “Hang out with people that have antique tractors or cars and see what it’s all about before you jump into it and lose a lot of money.”