At a time when the closest resemblance to racecar driving kids may experience is via the latest video game or newest app, it’s no wonder few are aware of an almost 80-year-old tradition that grants kids the opportunity to construct and race their own gravity-powered machines. The All-American Soap Box Derby draws kids who are ages 7 through 17 and located all over the country to Akron, Ohio, each year for the world championships. And since 2004, young drivers from Ocala have had the opportunity to participate in this national, time-honored pastime of decades past.

What Exactly Is A Soap Box Derby?

The idea for the original soap box derby arose from an Ohio news photographer in 1934. Myron E. Scott noticed a few boys racing engineless homemade cars downhill. Being a creative and progressive thinker, Myron asked the boys to return a week later with as many friends as they had to race for a “loving cup” as depression-era trophies were called. Nineteen boys returned to the designated spot with their homemade cars to vie for the cup.

Intrigued by the number of participants that came out to race for a mere trinket of a trophy, Myron decided to expand the call and offer grander prizes. On August 19, 1933, an estimated 40,000 people came to watch 362 boys race with their makeshift downhill cars. They brought cars constructed from everything you can imagine, including orange crates, sheet tin, wagons and other various objects with wheels, though interestingly enough, not one boy raced in an actual soap box.

The event was such a success that several big-name sponsors, including Chevrolet, Goodrich and Goodyear jumped on board, and a national championship race was scheduled for the following year in Dayton, Ohio. Thirty-four cities sent representatives to race that year and as soap box derby races grew in popularity, so did the sponsorships, prize-money and quality of the cars.

The following year, the race was moved to Akron, Ohio where it remains to this day, only taking a brief hiatus during WWII. Over the early years of soap box derby racing, more rules came into play to equalize the field, including size and weight of the cars and ages of the participants. Girls were first allowed to compete in 1971, and the first girl to ever win the national championship was Karren Stead in 1975 at age 11. 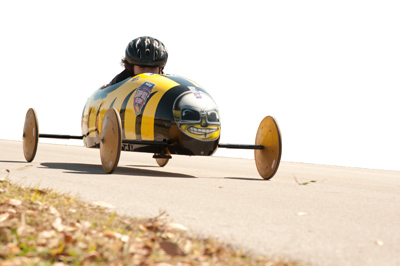 Soap box derbies reached their heyday in the 1940s, ‘50s and ‘60s but waned in popularity as more technologically advanced games and pastimes came on the scene. As many as 70,000 spectators used to flood Akron, Ohio for the All-American Soap Box Derby, including big-name singers, actors and other celebrities. The Derby was even ranked one of the top five sporting events in terms of attendance at one point. 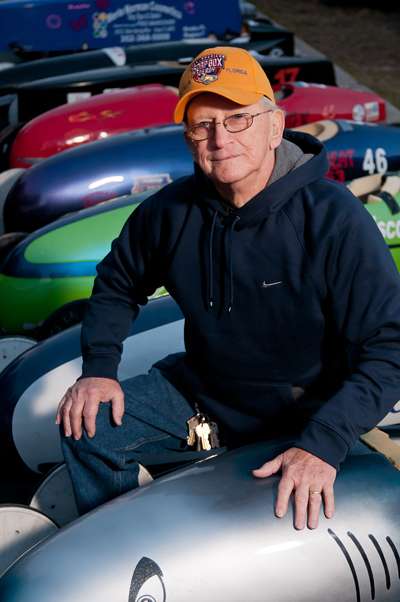 “It’s an honor just to go,” says Ralph Limberry of the Ocala Soap Box Derby Organization. Ralph, a soap box derby participant himself in the late 1940s has been involved with Ocala’s soap box derby since its inception in 2004.

“It all started when the president of the Silver Springs Shores Kiwanis Club was at a conference in Kentucky and spotted a banner about a local soap box derby, Ralph explains. “He brought the idea back with him, and the  rest is history.”

A group of interested individuals made the necessary calls to the All-American Soap Box Derby Organization to request the information needed to start a group here in Ocala. After acquiring the car kits and building the starting ramps, the group held their first race in May 2004 along Silver Road in front of the Silver Springs Shores Presbyterian Church. Although everyone was excited, the event saw its share of first-year glitches.

“We had a slight problem with the first race; the cars didn’t quite make it to the finish line,” Ralph recalls with a grin. After a few amendments to the course, the Ocala Soap Box Derby became quite a success. In recent years, it has grown in popularity, and the organization continues to purchase new cars. Today, they own 34 total, with each car sponsored by a local business or organization. 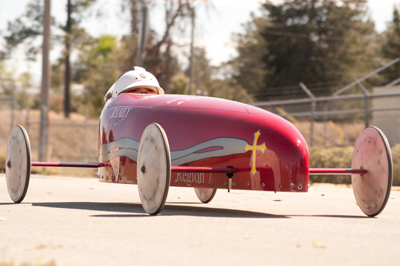 Although the earliest generation of derby drivers suited up to race downhill in everything from milk crates to garbage cans and searched through junk yards to salvage miscellaneous parts to be used on their racers, today’s drivers have far less of a hassle if they want to race.

“We provide the car; you provide the child,” says Ralph. The Ocala Soap Box Derby Organization is a 501(c)(3) non-profit organization and is run and managed completely by volunteers who help the young drivers prepare their cars and arrange transportation.

“I look at the faces of the kids when they get in their cars for the first time,” says Ralph, who explains that he andmany of his fellow volunteers don’t have grandchildren residing close by. The Ocala Soap Box Derby allows them to interact with kids in an event many of them remember fondly from their own childhoods.

Matthew Gajraj, 12, and his sister Kayla, 7, both compete in soap box driving, while many of their friends are unfamiliar with the sport.

“I have a few friends at school who race, but not many,” says Matthew, who attempts to recruit more of his peers to give it a shot. Like most child athletes, Matthew competes in several events throughout the year and has traveled to races as far as Sanford, Tallahassee and Lakeland. He’s been racing since November 2010 and describes the short run downhill in one word: “exciting.”

“You just get in and feel ready to go,” he says with a look of enthusiasm in his eyes. And his own excitement has rubbed off on his younger sister, who only just began racing this year and has taken over Matthew’s former car.

“Something just told me I had to race,” says Kayla, though she admits that the first time she was “a little nervous going down the hill.”

Matthew and Kayla prepare the cars, whose main bodies are already assembled, by cleaning the cars, testing the brakes and steering and oiling up the axels and wheels to prevent rust or dirt build-up.

The two hope to make the trip to Akron, Ohio, for the championship in July. 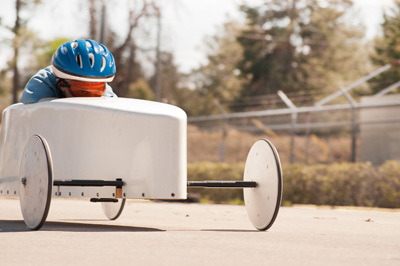 The Call For Kid Drivers

As a non-profit organization, the Ocala Soap Box Derby relies on the support of the community to keep this once-popular pastime alive for today’s youth. It costs the organization $6,000 each year to hold a championship qualifying race. Fundraising events such as trips, raffles, race fees and private donations help fund the organization. However, Ralph says he won’t turn a child away who wants  to race.

“If a family can’t afford the fees, we have alternatives. We do this for the kids; we don’t want to see them disappointed,” he says.

This year, the qualifying race for the All-American Soap Box Derby Championships in Akron will be held on May 4. Ralph expects the race to fill and encourages interested drivers to register early, as there are only 34 cars available. The winners will advance to the championships and financial assistance is provided for the  trip north.

“It’s just good, clean fun for the kids,” says Ralph, who profoundly enjoys the look of excitement on the young drivers’ faces. And perhaps in a time where kids’ eyes are often glued to computer screens for hours on end, a return to a simpler time of racing milk crates and sheet tin downhill is just what the  doctor ordered.