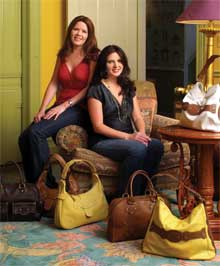 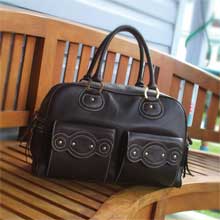 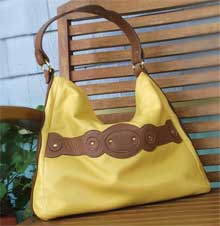 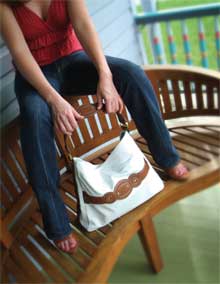 Talk about professional nirvana — Tracy and Ashley Zych have channeled their love of handbags into a successful career in the fashion industry. Their ultra cool leather purses are regularly featured in celebrity magazines like People and US, attracting a star-studded following including Desperate Housewives actress Terri Hatcher and the OC’s Rachel Blison.

The Italian leather handbag line received rave reviews during Manhattan’s fall fashion week, capturing a spot in the exclusive Train fashion show. This popularity has catapulted them into the Hollywood spotlight motivating the company, Tracy Zych New York, to open a west coast operation in Los Angeles where both sisters currently reside.

And to think this all began in Ocala, Florida. Well, sort of.

After moving with their parents, Myrtis and Andy Zych, and brother Greg to Ocala from South Florida in 1984, Tracy and Ashley attended and graduated from Forest High School. College for Tracy and healthcare training for Ashley took the sisters on separate paths, but only temporarily.

“We always knew we’d like to have a business together, although we weren’t sure what field we’d go into,” says Tracy.

A shopping trip to New York City in 2000 changed all that. The big city and big lights convinced the girls to pursue their design dreams in a very big way.

“We fell in love with New York and thought we could carve our passion for purses into a full-time career,” notes Tracy.

“For over a year, we researched everything there was to know about handbag design,” says Ashley, “We went straight to the source — we knocked on doors and talked to fashion designers and manufacturers in the fashion district and asked them what it took to make it in this business.”

And they discovered it takes creativity, dedication, and a healthy dose of courage to succeed in this competitive profession. While the talented duo has all this in handbag spades, they also acknowledge there were two important women who gave them the bravura to launch their business — their mom and Oprah.

“My sister and I inherited our mom’s passion for handbags,” says Tracy, “She always told us that no outfit was complete without one and said a fabulous purse was like the icing on a vanilla cake.”

Mom’s instinctive sense of style coupled with a provocative show on Oprah clinched the dream deal.

“We got the courage to be entrepreneurs by watching an Oprah show about young millionaires,” says Tracy, “We even taped the show and watched it a few years later for inspiration.”

That wish may come true at the pace the company is gaining in reputation. This industrious pair introduced their New York City line in 2003, although their initial creations had humble beginnings. Tracy laughs thinking about the time she used a compact disc as a model for her spherical purse design which, eventually, became a popular line for the company. Bad weather kept Tracy from leaving home to buy some designing tools that day, so she grabbed what was in front of her, in this case a John Mayer CD.

“I think coming into this business without a set of do’s and don’ts,” Tracy adds, “has kept our designs fresh and fun.”

Fun indeed. Their popular pouches have inspired several chic lines ranging from buttery leather with exquisite gold hardware to preppy classic clutches. With catchy names like “Sassy” and “Classy,” how can they go wrong? Their savvy style resonates with young and hip buyers, something not gone unnoticed by fashion editors, stylists, and retailers who sit front row along the catwalk. The Zych sisters’ Spring 2006 line is already a success, but there’s no rest for the fashion weary. It’s already time to think about fall.

“This industry runs season to season, so we’re working on designs for fall and winter 2006-2007,” says Tracy.

So, what’s next for the Zych sisters? Well, Jessica Simpson to be exact. One of their popular bags is named “The Jessica” after the Dukes of Hazard star, as the sisters were inspired by Simpson’s flair for fashion.

Plans for expansion are also underway as the Zych sisters are constantly seeking inspiration for the next must-have bag. Tracy says they’d like to add a few more designs and preview them in future internationally recognized shows.

Such goals should be easily achieved. When it comes to dreaming and doing for Tracy and Ashley Zych, it’s all in the bag.

Want to buy a Tracy Zych? Visit Greiner’s For Men and Ladies in Ocala or go to tracyzych.com.