Just ask the guy wearing full camouflage caught on private property, gun in hand, who swears he’s done nothing wrong. Minutes later, when a canine search turns up a blood trail leading to a dead, antlerless, out-of-season deer hidden in the brush, his story suddenly turns into a confession. But it took a trained dog and handler team to uncover the truth. 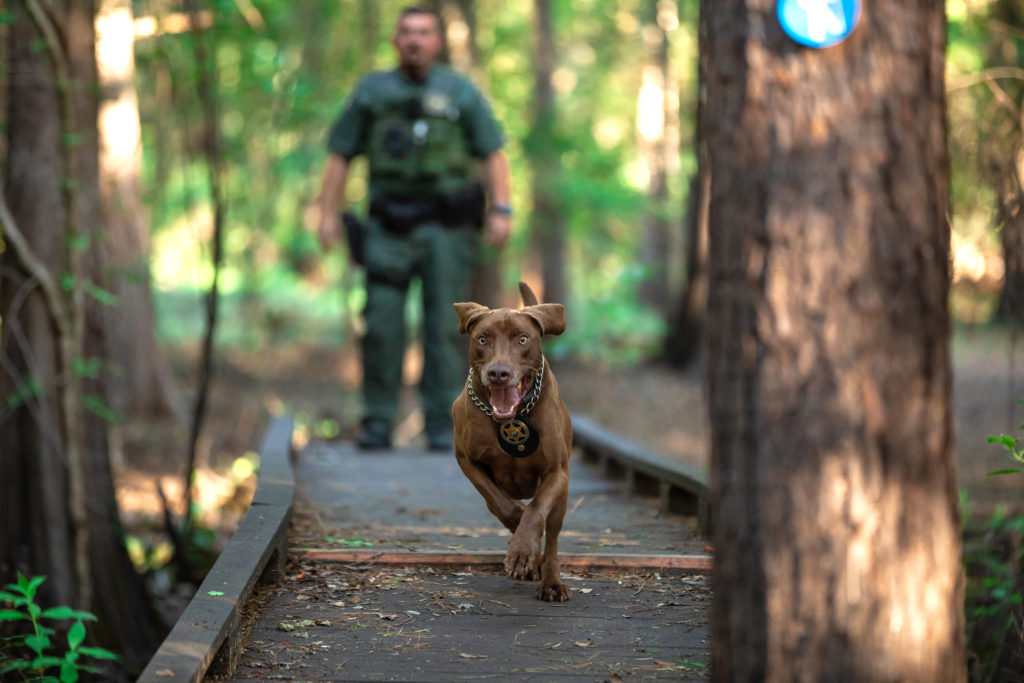 “People will say they poach to put food on the table, but it’s often the urge to kill something and the thrill of seeing if they can get away with it,” notes Joe Simpson, an officer and specialist canine handler with the Florida Fish and Wildlife Conservation Commission (FWC) for the past 17 years.

FWC is the agency tasked with regulating hunting seasons across the state, but they also enforce laws relating to the illegal taking of fish and wildlife—in other words, poaching. Putting man’s best friend on the task force has been a huge help in catching people who feel like the rules don’t apply to them.

In 2018, there were at least 575 poaching violations in Florida, and this doesn’t include saltwater species or license violations.

“A lot of times it’s the dog that helps make the case. We also solve many cases because someone posts something they’ve killed or caught on Facebook; inevitably one of their ‘friends’ will call us and report them,” says Simpson, who patrols Marion, Lake and Putnam counties and is also the dog trainer for Florida’s northern region.

Citizens may refer to them as “game wardens” (or “marine patrol” on the water), but the men and women hired by FWC are state law enforcement officers and can enforce all laws, including speeding, etc. However, they specialize in resource protection and some of these officers have a trusty canine at their sides.

FWC doesn’t buy dogs; their canines are either donated or rescued and are sporting breeds, such as Labrador retrievers, German short-hair pointers, weimeraners, or mixed breeds, both male and female. A number of dogs have been donated after trainers found them too “high-drive” to be seeing-eye dogs. Simpson’s own dog, “Moose,” a chocolate lab mix, came from a pound in Georgia five years ago. Almost bald from a horrible case of mange, he still passed the initial assessment by having a strong play drive—essential for a successful FWC canine.

“We look for dogs 1 to 3 years old so they’re still young enough to learn and work for a number of years,” says Simpson, whose dog is now 6. Officers are allowed to keep their dogs after the animals retire from service.

In the four-month-long training process, tracking is the first skill dogs learn. Simpson says dogs are frequently used to track a person, whether it’s searching for someone who got lost while hunting or tracking a person who runs from an officer who is performing resource checks.

Dogs are then taught to detect specific odors. For example, the trainer will put alligator meat on a towel, hide it and then reward the dog when he finds it. The reward is never food, but rather play time with a favorite toy. Once the dog is confident finding the scent farther and farther away, the trainer increases the difficulty by placing the scented item in a box. Because the dog is rewarded every time he “alerts” to the target scent, it becomes a game for him to find it, no matter how challenging. Dogs may “alert” by sitting or scratching at the area.

This skill is used time and again when FWC officers search a vehicle, boat, building or other area. Poachers may hide parts of the animals and fish they’ve killed illegally, but a dog skilled in detection can easily find them. Dogs can be trained to find specific types of animals or fish and become “certified” in those odors; for example, Moose is certified for deer, turkey, alligator and duck. 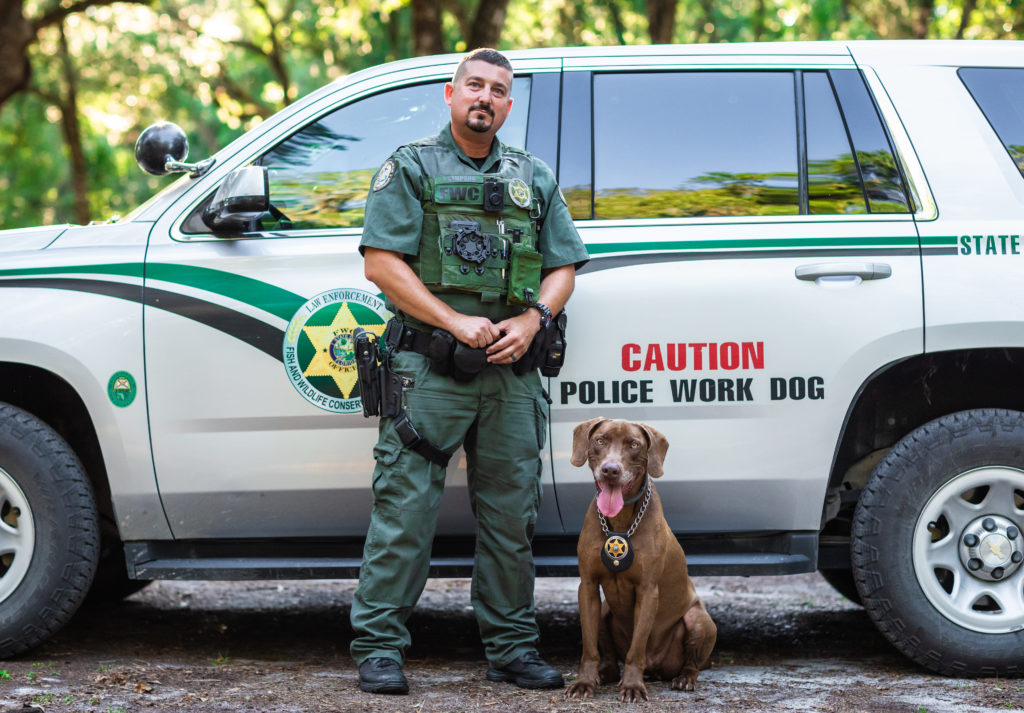 In South Florida and the Keys, poachers commonly take lobsters out of season or ignore size limits. An FWC officer can search a boat with his or her dog, who will alert to even a single lobster tail hidden beneath the deck.

“If it’s on the boat, the dog will find it,” says Simpson. “A dog can search a vessel within seconds.”

Article searches are the final phase of training, in which the dog is taught to alert to anything unnatural in the area being searched.

“We use a variety of things during training—shell casings, wallets, cell phones, etc.—because you never know what you’ll be looking for,” explains Simpson.

Spent shell casings are often found in article searches. In one case, an FWC officer was called to a scene where a suspected poacher had been confronted by the land owner who found a freshly killed deer on his property. The suspect didn’t deny shooting the deer but claimed he shot it on his own property, and it jumped the fence and then died on the land owner’s property. Within seconds of being turned loose to search, the FWC dog alerted to shell casings on the land owner’s side of the fence, and the suspect confessed that he had indeed trespassed and shot the deer there.

FWC dogs continue to train even after going to work in the field. Their tracking, detection and article search skills are considered “perishable,” so handlers are constantly working to keep their dogs’ talents fine-tuned. Similar to learning a foreign language; if you don’t practice, you’ll get rusty. “Use it or lose it” definitely applies.

“We have 12 traditional dogs trained in tracking, article searches and wildlife detection, and five port canines who work specifically at sniffing out illegal wildlife (parts and live animals) that are being imported or exported from Florida ports,” says Simpson.

Poachers often try to ship animal items (meat, hides, eggs or live animals) out of the state, while others attempt to bring animals (exotic birds, reptiles, snakes, etc.) into Florida illegally. FWC port dogs find these items and animals hidden in containers before they can leave the ports.

The charges a person can face for poaching in Florida vary widely, from misdemeanors to felonies, and one case can include multiple violations. Punishment starts with fines and community service, but serious violations and repeat offenses can result in arrest and even prison time.

Florida covers 53,997 square miles, and that’s not counting bodies of water. It’s an enormous area to be covered by the 17 FWC K-9 teams. But if you could ask the dogs, they’re up to the task. After all, for them it’s really a game—even though they’re helping officers enforce the law.

“The cool thing about my job is that I get to go to work with my best friend every day,” says Simpson, rubbing his dog’s head. Moose jumps up, putting his paws squarely on Simpson’s chest, tongue lolling out in a happy dog grin. It’s obvious he feels exactly the same way.