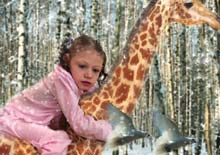 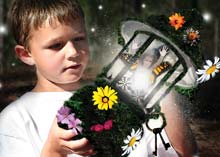 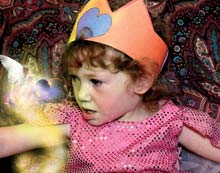 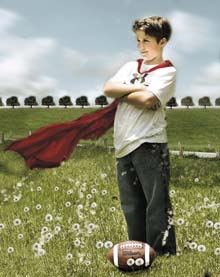 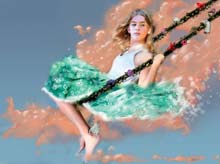 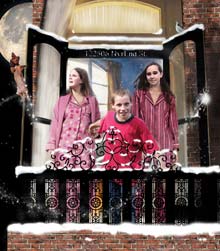 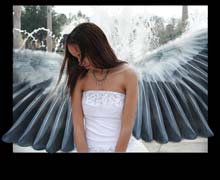 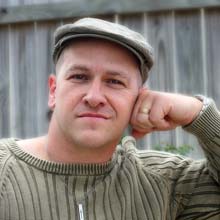 Marcell Rowe is certainly a magician, yet you won’t find him wearing a swirling black cape or top hat, nor tapping a cane filled with unlikely props. He does perform magical feats of artistry, however, with his charming and delightful fairytale portraiture. Seeing may be believing, but only if your definition of belief allows for a bit of artistic enchantment.

Rowe is difficult to define; his talent and personality refuse to be pigeon holed. Just when you think you have him safely matted and framed, he escapes and appears in a different guise. With a degree in graphic design and soon another in Christian Leadership, he is simultaneously the owner of BACE Creations, a unique portrait studio in Clermont, and a computer programmer for Osceola County Schools. The name, BACE Creations, is the acronym of the names of his four children: Brandon, twins Addi and Cadi, and Eliza.

He is a determined and energetic force of nature, armed with a digital camera, a smile, and a child-like quality that instantly connects him to his subjects. The images he creates flow from the imagination of the child he is photographing.

“I talk to the children and get to know them. I learn what fascinates them, what interests them, and that’s the direction I take the portrait,” says Rowe.

A review of his extensive portfolio is as delightful as turning the pages of a children’s book. It is filled with images of children immersed in a dreamscape that reflects their own inimitable imaginations.

While there are many highly-skilled photographers who can ably capture the physical image, Rowe aims a bit higher. He wants to capture the spirit of the subject.

The images are both realistic, true to the spirit of the subject, and fantastical, incorporating the best of both worlds. Rowe performs his magic, not with incantations or the accoutrement of sorcery, but with enigmatic state-of-the-art tools called Wacom tablets, USB cables, matte boards, and digital pens. Eschewing the traditional canvas medium, he creates unique and whimsical works of art combining photography and digital wizardry.

“Children see for miles when most adults have difficulty seeing what’s right in front of their face,” says Rowe. “They [adults] have stopped dreaming; stopped reaching for the stars. They have often given up on their potential and refuse to see the possibilities that are there for the taking, if you stretch.”

Rowe seems to be the modern incarnation of a mythical dream catcher. He comes to the photo session armed only with a relatively uncomplicated tool for a magician — a digital camera — but that’s where the similarity to other portrait sessions ends. He spends lots of time talking to his subjects and asks them to share their dreams.

“Dream out loud,” he encourages them.

What images do they see in their imagination? Do they dream of touching the stars? Riding the wind? Talking with the animals?  The dreams of children may feature talking giraffes, flying away with Peter Pan, or slaying a dragon.

Perhaps they can do it, they believe, because no one has yet told them they couldn’t. Their dreams remain alive and bright, ready to be captured and portrayed. While the portrait may seem fantastical, it is the reality of the child’s heart — they are the brave warrior or the beautiful princess, lost in a fairytale world of wonder.

The same process works for brides, who dream of their perfect day — the one they’ve pictured since childhood. In front of a magical waterfall, in a dreamy gazebo adorned with floral displays, or even in a mountain glen, whatever the bride can dream, Rowe can bring to life despite the physical limitations of their actual locale. He even discourages the bride from looking at other bridal portraits, believing that she should concentrate on her own dream portrait and not be influenced by what others have dreamt.

“We can capture a bride’s image in a unique way that is truly her and no one else,” states Rowe. “We want the bride’s personal images of love, elegance, joy and beauty, to come from within. Once they relax and allow their inner dreams to shine, their love can be captured and portrayed for the world to see.”

Once the photographic images are professionally enhanced, they are painted digitally using Corel Painter. It is often difficult for the portrait subject, and even others present at the original photo shoot, to tell where the original image began and the digital dream ends. Clothing, hand placement, misplaced locks of hair, shadows or blemishes may be changed or removed. Each portrait takes approximately 18 hours to complete.

“Someone once said that God is in the details,” says Rowe. “I’m happy to give Him credit for the children and the beautiful brides. Anything I do comes last!”

For Rowe, when the image is completed, the reward comes not from the monetary payment, but from the client’s joy. The images he creates will follow his clients for life and will undoubtedly be passed down to future generations, creating a lasting tribute to the innocence of dreams.

A native of Saratoga, New York, Rowe currently lives in south Lake County with his wife Kristen and four children, ages 13 to 3, along with three dogs, one bird, and a pet python. Although his time is as spliced as the computer programs he administers, the persona Rowe most completely embraces is that of husband and devoted father, and much of his inspiration comes from his family.

“I met my wife about 10 years ago online and took a chance that changed my life. She must have had great vision to have seen the potential in me, because I needed a lot of polishing,” Rowe says with a smile. “I try to teach my children to dream big, to ignore the limitations that others try to impose on them. A lot of my inspiration comes from them, especially little Addi, who has multiple disabilities.”

Life, Rowe believes, is about following your passion and doing what you love.

“Life is for living,” he says. “Others may scoff at my lofty goals, but that’s okay. I refuse to sit on the sidelines with apprehension. I’d rather concentrate on playing the game of life, rather than worrying about whether I win or lose.”

What magic will this busy conjurer pull from his bag of tricks next? He’s working on a children’s book, which he will write and illustrate, and exploring the feasibility of a radio talk show aimed at offering motivational encouragement for those who may be less than optimistic about life and its challenges. He may also pursue a degree in mental health counseling, although it’s not clear when the current constraint of a mere 24-hour-day will allow for all of those endeavors.

If there’s a way, Marcell Rowe will find it, even if it means working a little time bending magic of his own.

For more information about Marcell Rowe and his photography, visit www.bacecreations.com or call 352-516-7839.