Throughout the 1960s and ‘70s, a fondue pot was common in many American homes. That was certainly the case when I was growing up, though I cringe now to think of how we cooked hamburger meatballs around a cube of cheese in the hot oil. Cholesterol and fat weren’t on my radar back then. 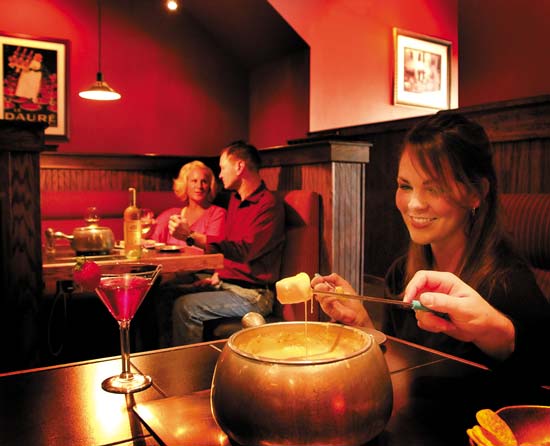 I remember feeling quite sophisticated, though, as we chatted and cooked, fondue pot bubbling away on the table. Fondue nights were always special when I was a kid. That much, at least, hasn’t changed.

Although fondue was mentioned in 19th century French writings, history hints that it dates back much earlier. The recipe of Pramnos wine, goat’s cheese, and white flour described in Homer’s Iliad sounds suspiciously like fondue.

Fondue, from the French word “fondre,” meaning ‘to melt,’ originated in Switzerland as a cooking method to put hardened cheese to use. What began as a peasant dish of warm cheese heated in a communal pot and eaten with bread speared by long forks, evolved into a cult phenomenon in this country. Fondue’s popularity soared after 1952, when Chef Konrad Egli of New York’s Chalet Swiss Restaurant introduced a fondue method of cooking meat in hot oil. This was followed in the mid-1960s by chocolate fondue.

The very first Melting Pot restaurant opened in Maitland in 1975, and the franchise now boasts 129 restaurants in 35 states. A recent visit to Ocala’s own Melting Pot reminded me why the fondue concept is still so popular.

“Nowadays, everyone seems to be in a hurry,” explains Sonny Camire, general manager and former owner of The Melting Pot in Ocala. “What makes The Melting Pot different is the fondue aspect, which creates a leisurely dining experience.”

Opened in 2001, Ocala’s Melting Pot is located in the historic Downtown Square in a century-old building on the corner of Magnolia Avenue and Silver Springs Boulevard. From the antique floor tiles to the high ceilings, the building itself contributes to the ambiance.

Whether it’s a girlfriends’ night out, a family celebration, or an evening for two, The Melting Pot accommodates masterfully. Thanks to the high-backed booths and dim lighting, your table is a private oasis. Each table features built-in burners where you cook the food your server presents, and the wait staff is highly trained in explaining the process, including how to cook the food correctly. 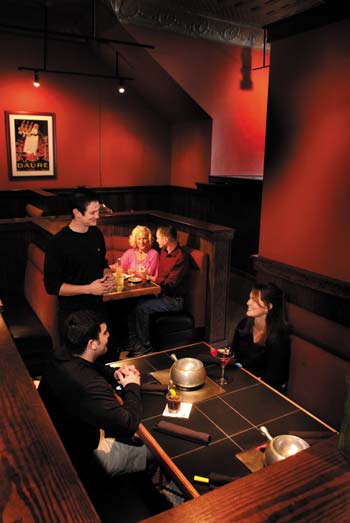 THERE’S NO NEED TO feel intimidated if you’ve never been to a fondue restaurant before, as Ocala native John Fortin discovered on his first visit to The Melting Pot.

“The server was very informative and made it easy,” says John. “I like to fry everything, but I followed our server’s suggestion to go with the Fondue Court Bouillon and was happy with that choice. The flavor of the food came through better that way.”

Many guests opt for “cheese and chocolate,” ordering the cheese fondue appetizer and chocolate fondue dessert. If you go this route and forego the entrée, be sure to order a tasty salad to round out your meal.

Although the Traditional Swiss Cheese fondue (a mixture of Emmenthaler and Gruyère cheeses, garlic, nutmeg, fresh lemon, and Kircshwasser) is my favorite starter, some patrons get creative with the Fiesta Cheese, Wisconsin Trio Cheese, or featured seasonal cheese. Whatever you settle on, the fondue will be prepared tableside and will be accompanied by fresh bread, vegetables, and apple pieces for dipping.

There are four salads on the menu, but I prefer the California Salad, a combination of baby spring greens, Roma tomatoes, walnuts, Gorgonzola cheese, and a raspberry black walnut vinaigrette dressing. Salads are included with entrées but may be ordered à la carte, too.

Individual entrées are popular, but entrées for two with their three courses—cheese fondue starter, salad, and main course—are great if you want a variety of items to cook.

Unlike in the past, when fondue meant frying everything in oil, there are healthy choices today. You can go with Fondue Court Bouillon, which is a seasoned vegetable broth, or the Caribbean-style Mojo fondue which combines the seasoned bouillon with citrus and garlic flavors. Brian promised that we would be happy with the Coq au Vin cooking style and he was right. With this option, you cook in wine with added herbs, garlic, mushrooms, and spices, much like a marinade. Having tried other styles, we were extremely satisfied and highly recommend it. The subtle flavors enhanced the flavors of the meats perfectly.

The fact that you literally cook your own meal means you control the pace. There are at least nine sauces, so take the time to experiment with flavor combinations. Personally, I think the Gorgonzola Port and the Green Goddess sauces go with just about everything.

All entrées come with fresh vegetables—potatoes, mushroom caps, yellow squash, and broccoli. We emptied the vegetable dish into our fondue pot after Brian assured us they wouldn’t overcook. We could then dish out hot vegetables throughout the meal.

A MAN AFTER MY own heart, Brian reminded us several times to save room for dessert. As if it wouldn’t be mandatory? After all, we’re talking chocolate fondue!

My friend and I studied the nine different chocolate options and then realized we could, as the menu suggested, “create our own masterpiece.” We asked Brian to bring us the Flaming Turtle with dark chocolate instead of milk. I’ve had many dessert fondues, but that combination of rich dark chocolate, caramel, and chopped pecans was the best yet.

I would have been happy just spooning it onto my plate and eating the fabulous concoction by itself, but the platter of dipping goodies—strawberries, banana slices, marshmallows, pound cake, cheesecake, and brownie bites—looked too good to pass up. (Okay, I confess. I did down a few spoonfuls of the chocolate fondue alone, but I don’t think anyone noticed me licking my spoon.)

After another satisfying evening at The Melting Pot, my dining companion and I promised we’d meet up here again soon. As hectic as our schedules are, it’s a treat to relax and linger over a delicious meal. Although I can’t help but feel like this is a special dining destination, every time I visit, I leave promising myself I won’t wait for an occasion to come in again. 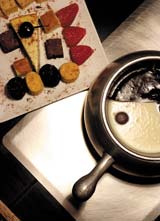 DO YOU FONDUE? 4 Fondue Facts