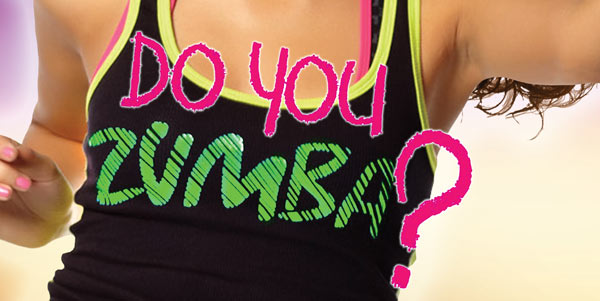 As an aerobics instructor for 20 years, I am not accustomed to the back row. But it’s been a while. I haven’t taught a class in 10 years, and while I have been out pounding the pavement running road races, inside the gym, a new era in aerobic exercise has caught the fitness world on fire—and this is my first experience with it.

Zumba is the new step, the new cardio-kickboxing and the new spinning. This upbeat, Columbian-born dance/exercise program has recruited a new legion of couch potatoes to find their inner dance star. Set to sexy Latin music, Zumba is a form of low-impact dance/exercise. It’s actually retro in that respect, as aerobics classes began as low-impact dance routines when Judy Sheppard Missett began the Jazzercise craze in 1969. Later, once the soundtrack from Flashdance hit store shelves, high-impact dancing began to take over.

The music begins, and my ear tunes to that all-too-familiar eight count that I taught to for years. The first few steps are a simple grapevine: step-behind-step-together. I know this! My nerves calm a bit as I pick up the phrasing and know when to expect the pattern to change. But this music is different from the Top 40 covers we taught to “back in the day.” The Latin rhythms, intricate and sassy, say, “This isn’t your mother’s aerobics class!” 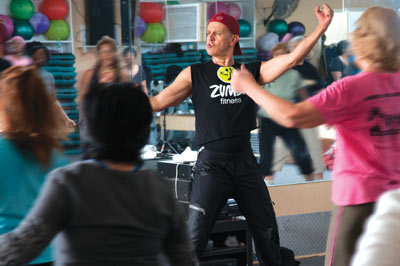 My instructor Steve is a seasoned pro; his cuing is easy to follow. He takes the simple grapevine step and adds a little hip action, then the arms begin pumping to the beat, then more hips, then a clap-clap and more hips. Wow, we are really moving now. I feel like I am in a chorus line running through the steps of a big dance number. I risk a look at myself in the mirror, and it brings me back to reality. I can hear Dancing With the Stars judge Bruno Tonioli in my head, yelling “Loosen up those hips, girl!”

Steve leads the class through song after song, and I soon find myself smiling, even laughing out loud. His easy-going demeanor lets everyone know that it doesn’t matter if you get all the steps right, it’s the movement that counts. With this cardio workout, participants are also working their arms, hips and abs at the same time. I find that while the basic patterns repeat, by adding different arm movements and other accents, each routine is different. There’s certainly no time to get bored.Before I know it, the hour is over and we have danced, and sweated, though nearly a dozen songs.

So exactly how did this craze begin? According to zumba.com, aerobics instructor Alberto “Beto” Perez went to class in Cali, Columbia one day without his usual music and notes. Improvising with the salsa and merengue music he grew up dancing to, he spontaneously created a new form of dance exercise. His students loved it, and he began offering classes in this new form. In 2001, Beto brought his class to Miami, where he teamed up with two Columbian entrepreneurs, trademarking the name Zumba Fitness. They began with DVDs and then put out an infomercial. By 2005, they had created a licensing program and an academy to train instructors. The trend obviously caught on.

Steve Markham, one of the Zumba instructors at Ocala’s Too Your Health Spa, had been teaching traditional aerobics classes and step aerobics for decades. A professionally trained dancer, he took to Zumba immediately and became a licensed Zumba instructor. Steve says he personally experienced dramatic weight loss results faster than he had with his prior classes, losing eight inches from his waist in the first two years of teaching.

“It’s not like the aerobics classes of the past, with the instructor counting out steps and yelling at you,” Steve says, “It’s supposed to be taught in a fun, party-like atmosphere, with a lot of non-verbal cues,” so that the participants are focused on the music, movement and having fun and not on an instructor’s voice. This setting allows students to forget that they are getting a workout and adds to the stress-relieving quality of the experience.

The biggest fear for people who haven’t tried Zumba is, understandbly, that they won’t be able to keep up with the dance-like moves. My friend Lori expressed this when I encouraged her to join me in my first class.

“I can’t dance,” she said, “I haven’t got rhythm!” Steve says this is a common reaction, but he likes to tell people that we all have rhythm; it’s innate.

“We breathe with rhythm, we walk with rhythm, our hearts beat with rhythm,” he says. Exercising with rhythm simply exercises that inborn part of us that we have suppressed, just like exercising with weights restores muscle strength that was formerly present. When we have been away from our natural rhythm, working, watching TV or in front of a computer, we lose touch. You can bring yourself back in tune with your body and what it can do, you just have to be patient and give it a try.

“I was scared to go at first,” says Zumba enthusiast Mary Henderson, “But it was so fun to dance again; I hadn’t danced in years, plus you’re getting a workout!” Some people are afraid of looking awkward if they don’t know the movements, but what you will find is that everyone is into their own workout; they are watching the instructor, not the others in the class. Another of my Zumba-shy friends admits she got the bug after the first class.

“It was just plain fun,” Suzanne says. “It really is like a party, a healthy party. Everyone is laughing and having a good time while they are working out.” That camaraderie creates unity in the class, which helps a fitness class maintain a strong following.

And men, take heart! Zumba isn’t just for women. Steve says he often has as many as seven guys in a class. Women often bring their husbands or boyfriends. This is the aspect of Zumba that impresses Steve the most, the fact that Zumba seems to bring people together.

“Here we are in a small community, and we are connected to the No. 1 fitness program in the world,” he says. “No matter where you might travel in the world, you will find Zumba. It connects us to a bigger picture.”

Zumba’s goal, according to the website, is to “spread the philosophy of health and happiness and of loving everything you do, especially your workout.” That’s a goal worth dancing for!

Zumba.com’s “Find An Instructor” tab lists 86 Zumba instructors within 25 miles of Ocala. Here are a few of the places you will find them:

Too Your Health Spas