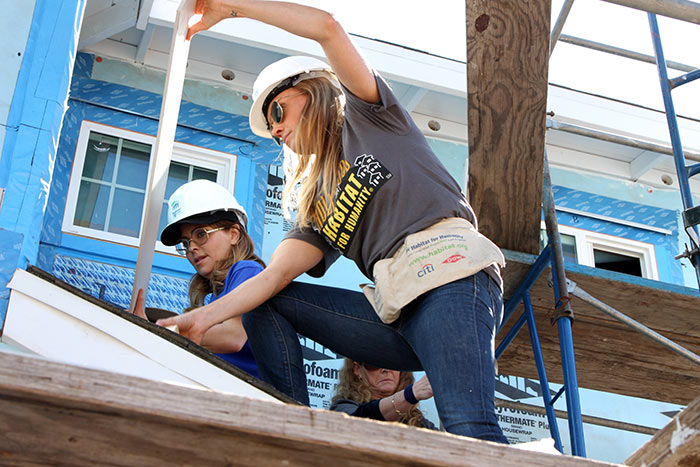 We’re there. Smack in the middle of the season of giving. Too often this finds us making charitable contributions and buying gifts more out of obligation than joy. Unfortunately, much of this mad scrambling to give, give, give carries more than a hint of desperation. Some of us just want to get all this giving done and cross it off our lists until next winter.

That’s not how it’s supposed to be.

Giving unto others is meant to be a lifestyle, not a crazed few weeks crammed into the end of each year. And don’t miss this important take-away: Helping others helps yourself.

“Doing good makes us feel good. Altruism enhances our self-esteem. It gets our eyes off ourselves, makes us less self-preoccupied. In other words, caring for others creates a psychological momentum and a sense of self-competence that makes us happier,” notes Stephen G. Post, Ph.D., professor of preventive medicine and founding director of the Center for Medical Humanities, Compassionate Care, and Bioethics at Stony Brook University School of Medicine in Stony Brook, New York. His best-selling books include The Hidden Gifts of Helping and Why Good Things Happen to Good People (with co-author Jill Neimark).

Giving of yourself to help others produces a “helper’s high,” a “pleasurable and euphoric emotional sensation of energy and warmth.”

“When the mind is genuinely focused on the well-being of others, that tends to shut down the parts of the brain that are involved in negative and destructive emotions, like bitterness, rumination, hostility and the like. Those are emotions that are all associated with extended stress, and extended stress has many adverse physical and mental impacts,” says Post. “On a spiritual level, when people meditate or pray for those in need, this refocuses the person away from self.”

It’s been well-established that doing for others activates parts of the brain associated with feelings of joy and even produces dopamine, one of the brain’s “happiness” chemicals. People who help others have elevated levels of oxytocin, which has been described as the hormone of tranquility and trust.

We Americans are generous when it comes to giving of our time. A recent government study found that 62.6 million Americans—that’s just over 25 percent of the adult population—volunteered a total of 7.7 billion hours of service in 2013.

For many people, just volunteering a few hours a week makes a positive difference in self-reported happiness and mood. The 2010 Do Good Live Well Survey, released by United Healthcare and VolunteerMatch.org, surveyed 4,500 American adults:

42 percentof volunteers report a “very good” sense of meaning in their lives, compared with 28 percent of non-volunteers

If you think you feel better when you help others, it’s not just in your head. There are actual health benefits associated with giving to others. Studies over the past 20 years show that volunteering is associated with lower levels of depression, increased well-being and a 22 percent reduction in the later risk of dying.

A 2013 study in Vancouver, BC, Canada, involved 106 high school students in 10th grade. The students were split into two groups—one group volunteered regularly for 10 weeks, one hour per week helping children in after-school programs. The other group was placed on a waiting list for volunteer opportunities. Researchers assessed the students’ mental health, mood and empathy and also measured body mass index (BMI), inflammation and cholesterol levels before and after the study.

When the 10-week study ended, the volunteering students had lower BMI levels and lower levels of inflammation and cholesterol, biological markers that, when elevated, are the first signs of cardiovascular disease. Those students who reported the greatest increases in empathy, altruistic behavior and mental health had the greatest reductions in the biological markers.

A study done in 1981 looked at retirees over age 65 who volunteered and those who did not. The volunteers scored significantly higher in life satisfaction and will to live and had fewer symptoms of depression and anxiety.

A recent study published in 2013 followed 1,100 older adults ages 51 to 91 who were interviewed in 2006 and had their blood pressure checked at that time. Four years later, in 2010, they had a follow-up interview and another blood pressure check. Subjects who volunteered at least 200 hours (an estimated four hours per week) in the past year at the time of their first interview were 40 percent less likely to have developed hypertension four years later than non-volunteers. Researchers suggested that this impact was due to the stress-reducing effects of being both active and altruistic.

“All the studies we’ve done show that depression is significantly reduced in people who are helping others,” Post notes. “Most assisted living facilities have programs where residents can be involved in volunteering and pro social activities. There are eight or nine studies with large databases that have shown that older adults helping others can extend life expectancy. [Those who help] also tend to be more lucid of mind and more robust.”

So how can generosity and compassion for others become a lifestyle? Start early. Introduce children to generosity and volunteering so that this becomes a regular part of their lives.

“It’s very important to get children started early,” agrees Post. “Parents should think about volunteering as a family in an area they find meaningful to them. Bringing children into a volunteer setting often happens when youth are involved in a group at their church or synagogue that helps others in the community.”

“Volunteering can be frustrating if you don’t feel cut out for what you’re doing. It’s better to find ways where you feel you’re using your strengths and talents,” says Post.

If you’re involved in a church or social group, that’s a great place to start. Many have needs for volunteers, ranging from one-time events to weekly assistance, so contact the office and ask whether there are any volunteer opportunities.

“When looking for an opportunity that best suits the potential volunteer, people should contact organizations directly,” suggests Angela Bonfardino, executive director/CEO of United Way of Hernando County. “Always ask if a volunteer application is available to be filled out, simply because the organization might not have anything available at the moment but the volunteer’s information can be kept on file for upcoming events or projects where extra help is needed. Committed volunteers are what make our projects and events so successful.”

United Way itself is always a good resource to help connect would-be volunteers with organizations actively seeking help. Your local chamber of commerce office may also be aware of volunteer opportunities, either for area organizations or specific events, such as festivals that benefit specific causes. Local libraries, hospitals and hospice are always in need of dedicated volunteers.

If there’s a cause near and dear to your heart, there’s probably an organization (or more than one!) connected to it. Think animals in need, military veterans, breast cancer, Alzheimer’s, multiple sclerosis, children’s cancer… the list is almost endless. A quick Internet search will turn up organizations and associations and let you find out if there’s a chapter in your area.

Avery Duval, an insurance agent in Ocala, happens to be an avid hunter, so he was interested in helping others pursue the same passion. A member of Heart of Florida Buckmasters Chapter, a hunting organization based in Ocala, he’s now volunteering his time as a hunting guide for Wounded Warriors and disabled military veterans.

“It’s the most rewarding thing I’ve ever done,” says Duval, who began volunteering last year. “Last year I met a disabled former Marine who used to be a Marine sharpshooter. His physical limitations make it impossible for him to go out into the woods and hunt on his own. I took him out to a hunting camp, and he was so grateful to be able to harvest a deer because he hadn’t been able to hunt on his own for 15 years.

“I’m very passionate about our country,” adds Duval. “To be able to give back to those who have served our country and made great sacrifices for my freedom is one of the greatest gifts in the world. I’ve found my cause. It’s an amazing feeling to help someone this way.”

If you’re not sure exactly what your volunteer passion is, Post recommends the website, volunteermatch.org, which he describes as “The Angie’s List of volunteering.” Using the site is a cinch. Just type in your ZIP code, and click on the topic that interests you. The listings for each opportunity describe the need, any necessary skills needed, what age is best, how much time is required and, of course, a way to contact the organization.

Another helpful online site that can help you find a great place to volunteer is allforgood.org.

You can also look up local contacts for the following groups in your area:

It doesn’t have to be one or the other.

“If done sincerely, giving money can be meaningful and beneficial. But you tend to get more out of it when you’re involved in face-to-face giving (volunteering), rather than just writing a check,” explains Post. “There is a feeling of joy in writing out a check to help the needy, and there is certainly a sense of life meaning. But the impact of such actions alone, without active engagement in helping others, is relatively less. This explains in part why so many people in philanthropy these days want to be actively involved in the organizations and activities of the programs they give to. They are looking for a new and more fulfilling way of life in a world of affluence, materialism and consumerism.”

Whether you help others through donating money or time (or both), you need to get beyond the “pay-it-back” mentality. In most cases, the people you’re helping aren’t capable of responding in kind. You should give of your time and/or money without expecting that the recipient of your generosity will do the same. Hopefully, they will “pay it forward” and help someone else however they can, but that shouldn’t be part of your motivation.