Sure, Mike Pierannunzi likes golf, but don’t expect him to get too excited talking about it. To see real enthusiasm, you need to bring up disc golf. 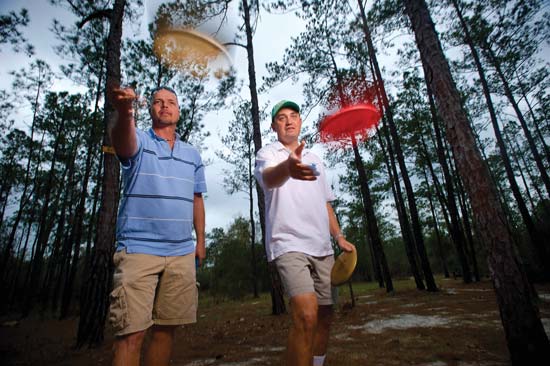 “Disc golf is faster-paced than traditional golf,” explains Pierannunzi. “It takes half the time and is a fraction of the cost of ball golf. It’s challenging, but it’s more fun than it is intense and frustrating. It’s not intimidating and you can get to an acceptable level of proficiency in this sport in a much shorter time than with regular golf.”

So, what is disc golf?

Played much like traditional golf, disc golf—which uses Frisbee-like discs and is sometimes referred to by novices as “Frisbee golf”—officially started in California in the late 1960s where the first official course opened in 1975. Just as in “ball golf,” the object is to complete each hole in the fewest number of strokes, or in this case, throws.

Players start at a tee and progress down the fairway toward a target or hole, which is typically an elevated metal basket known as a Pole Hole. Each throw is made from the spot where the previous throw landed. And, yes, just like regular golf, the terrain, trees, and vegetation on the course can provide some real challenges.

Pierannunzi got hooked on the sport while a student at the University of Miami. He played Ultimate Frisbee in college and one of his team members introduced him to disc golf. Founder and president of the Ocala Greenway Disc Golf Club, Pierannunzi also built the club’s course in 2003. The course is located on the state’s Greenway property in southeastern Marion County, east of State Road 35 and just north of Maricamp Road.

The 20-hole course is 80 percent in the shade, which makes it possible to play even during the summer. Pierannunzi considers it a “peaceful stroll through the woods,” but admits that at times the abundance of pines and oak trees make some holes more challenging than others. Each hole ranges from 200 to 500 feet and most have two tees.

There are no greens fees and no carts. Walking the course is great exercise and the change in elevation offers plenty of variety. It takes about 1 1/2 hours to play 18 holes. Pierannunzi recommends carrying water with you to prevent heading back to the parking area after nine holes.

There are 26 active members of the Ocala Greenway Disc Golf Club.

“I’ve played with brain surgeons; you meet all walks of life in disc golf,” says Chris Blanton, who’s been playing since 1991 and is the course pro for the Ocala club. “It doesn’t stop at any age. We have players out here who are 70 years old and they’re phenomenal!”

As the course pro, Blanton gives lessons—a bargain at $20 for two hours—and donates all proceeds to the club. Unlike many sports, getting started in disc golf is inexpensive. A set of three discs only runs about $30. They come in myriad colors and you can even get glow-in-the-dark discs.

“The thing about this game is knowing your disc and selecting the right one,” says Todd Steuart, a member of the Ocala club who began playing less than a year ago. “I like it for the exercise and the challenge of getting the disc to do what you want it to!”

Steve Scovill, another club member, has been playing for three years and appreciates the camaraderie of the sport.

“You get hooked on it,” he offers. “It doesn’t cost a lot of money and it doesn’t take a lot
of time.”

While there is a national disc golf tour, these pros aren’t making the same dollar amount as Tiger Woods. But some do make a living at it. The Red Hawk, a tournament held in Crystal River every year, offers $10,000 in prize money to the winner. Not bad for a game that attracts most participants simply because it’s so easy and inexpensive to get started.

“You don’t have to be physically gifted and anyone at any age can play,” says Pierannunzi. “There’s no discrimination. Everyone from doctors and lawyers to kids and retired people play. Because disc golf is really still in its infancy, players are a lot more accepting than you find in many other sports. I like golf, but there’s no comparison to disc golf. It’s a great game.”