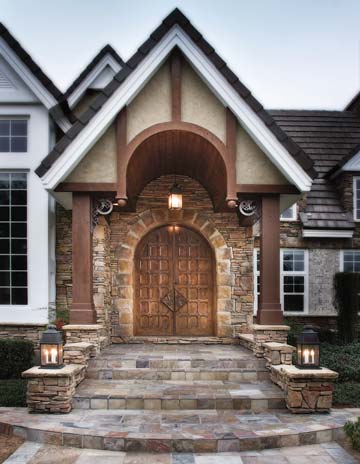 THESE MASSIVE ENTRY DOORS were carved out-of-state
and then shipped to the Cwiks’ Ocala home.

THE ENTRY DOORS TO JOHN AND PATRICIA CWIK’S spacious equestrian home look like they’ve been lifted out of the pages of Grimms’ Fairy Tales. The arched twins are like massive sentinels—intricately carved, lovingly detailed, sturdy. And unforgettable.

But nary a window peeks from the grainy surface, which is incredibly ironic considering that John has made his living as the founder and CEO of Ocala-based Custom Windows Systems, a nationwide leader in the window industry with a 200,000-square-foot plant in the Meadowbrook Commerce Center west of I-75. This need for a quiet life out of the spotlight is immediately understood after spending just a few minutes with the gracious couple. 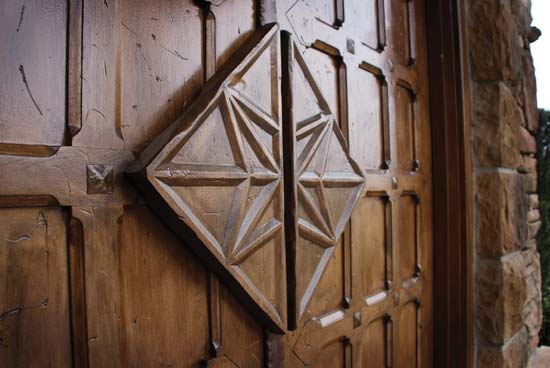 A MEMORABLE FIRST IMPRESSION is made with these one-of-a-kind door handles.

The Cwiks built their current residence to be close to nature, near the Florida Horse Park, and outside the city limits for a more private lifestyle. On weekends, if the couple isn’t relaxing inside their 5,000-square-foot dream home or walking the rolling landscape, they will most likely be high in the saddle on one of their four horses, lapping the 2.5-mile bridal path or exploring the nearby trails.

Patricia knew what she and John wanted to achieve in their new home. The couple’s goal was to blend the elements of contemporary and traditional design into a beautiful-but-understated showplace. Of course, the home would need to make a memorable first impression, not unlike the first chapter of a centuries-old story. Because of this, Patricia knew exactly who to call—she knew she needed to enlist the talents of local interior designer Roger Bills.

“Roger understood I wanted a modern theme, so he helped get us there,” says Patricia. “The door started on a cocktail napkin. We were talking in a restaurant, and then we had had a couple of glasses of wine…”

Patricia’s thought trails off, but the concept didn’t. Because of his extensive expertise on a variety of projects learned from a distinguished three-decade career, Roger probably had something in mind before the dessert course arrived. One thing is certain—Roger’s doors initiated the whole design. In fact, they were completed months before the home was ready.

“Roger’s handprint is all over the house—the windows, the ceilings, the cabinets,” John offers. “He was a big influence.”

“And the door looks like something you’d see in an old castle in Germany,” Patricia adds.

Just one that was made in Ohio.

Built using guitar-quality mahogany from Roger’s meticulous drawings, the doors were crafted to a final height of nine feet. The 3-1/2-inch thick double doors were then disassembled, shipped to Florida, and raised into their rightful spot in the Cwik home. Sturdy hinges allow for the huge doors to be opened like casting a small boat into smooth water. They are surprisingly light and require very little effort to be put into motion. They’ll probably last forever. 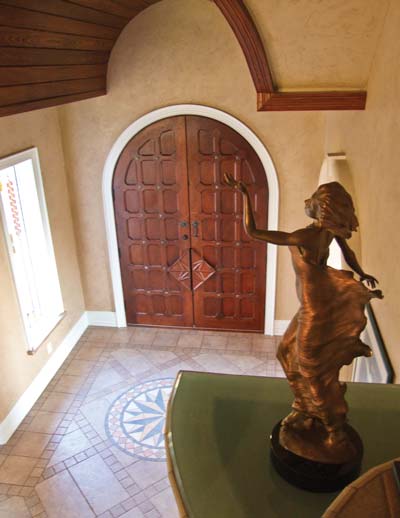 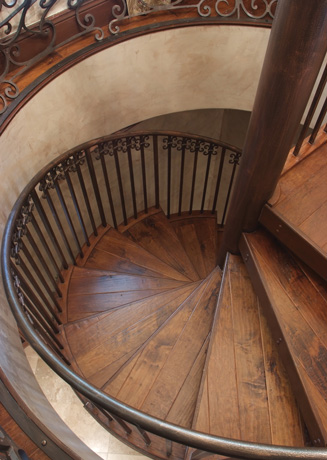 “Mahogany is an excellent exterior décor wood,” Roger explains. “It’s prettier than teak and more stable. But, most of all, we tried to keep the scale human.

“This was one of the easiest houses I’ve ever done because John and Patricia gave me so much freedom from the very beginning,” Roger concludes. “I was there, on site, for at least a couple of hours almost every day.”

The hard work has paid off handsomely.

Very involved locally with several worthy charities—the Humane Society, Habitat for Humanity, and Marion Cultural Alliance—the couple received an urgent call this past autumn from Margaret Rowell, the director of development with the Florida Horse Park. She asked them to host an after-party for the event riders and some special guests on only six days’ notice.

The Cwiks, pardon the pun, opened their doors to the idea.

“We had 80 to 90 people,” Patricia remembers, “and it went off really well. Everyone had a good time.”

The spontaneous party quickly spilled out into the stunning backyard gardens and down to the equally impressive paddocks behind the main house. The result? The horse park filled its pressing need and the Cwiks made some new friends.

The couple has since hosted several more events at their home—a Valentine’s Day dinner, a Spring Equinox party, and a holiday bash—each a good time for a good cause. The Cwiks’ lovely house and its impressive double doors that greet everyone made it all possible.

“All I ever wanted was a paycheck, but I think we’ve done a little better than that,” John says with a low-key chuckle. “We’ve been very blessed by Ocala.”

In terms of decorative impact, there’s something underfoot. Flooring has become a popular and versatile design component. Cool travertine tiles, luscious pile rugs, and easy-to-clean laminates are inspirational examples of ways a floor can pack a punch in high style.

Even traditional wood floors offer a wealth of aesthetic choices today. Practical and attractive flooring provides both a suitable and affordable approach to covering the largest spaces in each room. And floors give a much-needed design connection from one room to another, and meet a home’s needs with function, form, and, yes, fun!