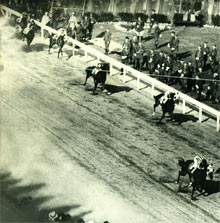 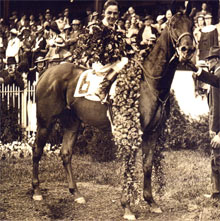 The photo is golden brown with age, another year older every first Saturday in May. The jockey, looking even younger than his 18 years, is perched atop the leggy Thoroughbred in the grassy winner’s circle. A garland of roses is draped over the horse’s withers and the jockey grasps a bouquet of roses that is almost bigger than him. Rider and racehorse are both staring into the camera, looking right into their moment in Thoroughbred racing history.

Only minutes after a bumper-horse start, Ira “Babe” Hanford had ridden long-shot Bold Venture to a thrilling head victory in the 1936 Kentucky Derby. In doing so, Hanford became the first apprentice rider to win the storied Run for the Roses. The winning time of 2:03 3/5 for the mile-and-a-quarter race made it the third fastest Derby to that date.

It may have been 69 years since that history-making moment, but Hanford remembers it with amazing clarity.

“It was a pretty rough start,” he recalls on a recent afternoon at his home in Ocala. “The horse to the right of me, Bien Joli, bore into us, we bumped Granville, who went to his knees and lost his rider. Then everybody was just trying to straighten their horses up and go to running.”

It was a 14-horse field that broke from the gates that May 2 and Hanford soon found himself with a wall of horses in front of him.

“There [were] about seven or eight horses in front of me as we went by the grandstand and headed into the backstretch,” says Hanford, 87, and who still possesses the naturally small stature so well suited to being a jockey. “Bold Venture was just running real easy, just real relaxed even after that bad start. So I swung him to the outside and just let him start passing horses. When we got the lead going into the stretch, I took him to the inside and we headed home.”

Favorite Brevity, with Wayne Wright in the saddle, had also been jostled just after the start and was closing on Bold Venture with every stride. It became a two-horse race in the last quarter mile.

“We’re both riding our horses pretty hard, both of us going to the whip,” Hanford says, more urgency in his voice now. “Then right at the wire, my horse dug down one more time and we won by a head! That’s when it hit me that I’d just won the Kentucky Derby!”

Back home in Nebraska, Hanford’s mother and siblings had listened to the race gathered around a radio.

The 1-2-3 finish of Bold Venture, Brevity, and Indian Broom was allowed to stand despite three riders, including Hanford, later being suspended by the stewards for rough riding. Hanford, Indian Broom’s rider George Burns and fourth-place finisher Coldstream’s rider Nick Wall were all given 15-day suspensions.

The stewards’ ruling prevented Hanford from riding Bold Venture in the Preakness Stakes, the second leg of the Triple Crown, which he won with George “The Iceman” Woolf in the saddle. Woolf was one of Seabiscuit’s regular riders and depicted in the movie of the same name that starred Tobey Maguire as jockey Red Pollard. Hanford rode with and knew both Woolf and Pollard. The Preakness Stakes win also marked the end of Bold Venture’s racing career after he came out of the race with a bowed tendon. Retired to stud at King Ranch in Texas, Bold Venture would go on to sire Assault, the 1946 Triple Crown winner, and 1950 Kentucky Derby/Belmont Stakes winner Middleground.

For Hanford, the Kentucky Derby victory was a milestone in a successful career as both a jockey and a trainer, not a singular achievement. His is the remarkable story of a Nebraska boy, of tragedy and triumph, and a tale of three brothers. But the story is not on display in Hanford’s Ocala home, which he shares with his wife of 63 years, Virginia. There is not one 1936 Kentucky Derby picture on the wall, not one piece of racing memorabilia to hint of 50 years well spent in Thoroughbred racing. The story is in Hanford’s memory and in three trunks in the garage.

Hanford was called “Babe” because he was the youngest of 10. He was named Ira after his father, who died in a house fire along with the family’s eldest son, Paul, six weeks before Barbara Hanford’s last child was born on February 24, 1918. Shortly after the fire, the family moved from tiny Fairbury, Nebraska, to the big city of Omaha. The proximity of Ak-Sar-Ben Racetrack would prove to be fateful for the Hanfords.

“My brother, Buddy (Bernard), was the first to start working at the racetrack,” says Hanford as he unlocks the first trunk. “He was just a natural and soon was doing really good as a jockey. He moved on to Chicago and then to the East Coast.” Hanford pulls out a black-and-white racing photo of his brother. “Buddy was really going places and he wanted my brother Carl and me to come East too.”

Sadly, Buddy was killed in a racing spill at Pimlico in the spring of 1933. But Carl — and then Babe — still followed his lead and became involved in Thoroughbred racing.

“Carl started riding for Max Hirsch,” says Hanford as he digs deeper into the trunk and brings out more vintage photos. “One day, Mr. Hirsch’s daughter, Mary, who was the first woman in the country to get a trainer’s license, asked Carl if there were any more like him at home. That’s when I came east in 1934 when I was sixteen.”

Mary Hirsch gave Hanford his first mount in the winter of 1935 at Hialeah. “It was pretty bad,” Hanford remembers with a chuckle. “I just got around the track the best I could and when I jumped off the horse after the race, I was so weak-kneed I didn’t know if I was really cut out to be a jockey.”

Hanford’s concerns proved to be unwarranted. At Suffolk Downs on July 25, 1935, he won his first race on a horse named Sassaby. It is one of the well-preserved pictures found in the second trunk and documents the official start of Hanford’s highly successful riding career.

It should be noted that Hanford also rode Seabiscuit three times in 1936, their best finish being a second. “Of course, at the time he wasn’t the Seabiscuit that everybody later came to know,” says Hanford, shrugging. “Then, he was just another horse I rode.”

Like his younger brother, Carl Hanford would also claim a spot in racing lore. In the 1960s, he trained five-time Horse of the Year Kelso for Mrs. Allaire duPont. The association continues today as Carl’s daughter, Gail, now trains for Mrs. duPont. Now 89, Carl lives in New Jersey and still goes to the races whenever he can. There is but one other Hanford sibling still alive, 92-year-old Bernice Burgett.

Babe Hanford’s 30-year training career had many highlights. He trained numerous stakes winners, including Munden Point, Crème de la Crème, Floor Show, Pointer, and Rhubarb. One by one, he pulls the winner’s circle photos from the third trunk, giving a detailed account of each and every race as though they happened last weekend.

“I enjoyed every minute of it,” says Hanford later, as he carefully puts the pictures back in the trunk.

Looking back over five decades in Thoroughbred racing, Hanford has his own favorites when it comes to horses, jockeys, and trainers. The top five horses he witnessed at the racetrack include Native Dancer, Citation, Kelso, Seattle Slew, and Spectacular Bid. Making the jockeys’ list are Bill Shoemaker, Jack Westrope, Eddie Arcaro, John Longden, and Lafitte Pincay Jr. With the exception of Pincay, Hanford competed with all of them. The trainers he considered as the best and for whom he rode include Max Hirsch, Horatio Luro, Ben Jones, Hirsch Jacobs, and Charlie Whittingham.

While not making any list, Mary Hirsch holds a special place in Hanford’s heart.

“She was my guiding light,” he admits unabashedly. “She believed in me from the first day we met. Without her and her father, I wouldn’t have had a career.”

When Hanford retired from training in 1984, he and Virginia moved from Miami to Aiken, South Carolina. They lived there for 10 years before moving to Ocala 12 years ago.

“We like it here,” he says. “It’s a horse community and the weather’s great. I play a little golf every now and then. I can go over to the Ocala Breeders’ Sales Company for sales and to watch races. I’ve had a great life, better than a boy from Nebraska could’ve ever dreamed about.”