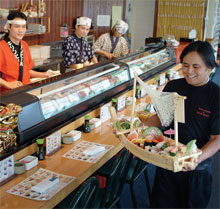 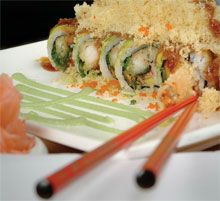 The name Tony generally brings to mind thoughts of The Sopranos and spaghetti, but not in Ocala. Here, nestled into the Colours Plaza off of State Road 200 across from the Paddock Mall, Tony’s Sushi offers an exotic retreat from the busy outside world and a chance to sample the divine flavors of the Far East.

Owners Tony and Jane Li first opened the doors to Tony’s Sushi in April 2001 and have since developed a devoted loyal clientele. Prior to opening the restaurant in Ocala, Tony spent 16 years living in Miami where he also owned a sushi restaurant. When asked what brought him to Ocala from Miami, Tony smiles sheepishly and says, “I got lost.” It turns out Tony found the rolling countryside of Ocala a welcome change from the hustle and bustle of city life, so he sold his Miami restaurant to bring something fresh and new to the heart of horse country.

Tony’s friendly and attentive staff makes you feel at ease. The atmosphere is casual and comfortable, unlike the pretentiousness you might find at some big-city sushi restaurants. And if you aren’t too adept with chopsticks, the staff will gladly provide a fork.

A little secret I learned quickly from talking to Tony is that some of their best sushi rolls aren’t even on the menu. Jade, the assistant manager, says one of the best parts of working at Tony’s is that you get to sample all the new combinations that are constantly being concocted in the kitchen. She says it takes a special talent, a certain chemistry to get the perfect combination of flavors. For example, she says that you might want to offset spiciness with avocado, so that the flavor cools you down as it warms you up. It is this type of flavorful combination that gives sushi its exotic appeal.

Tony’s currently employs five sushi chefs and they have created some of their own personal favorites that, once again, you won’t find on the menu. Most famous is the Denny Roll, named for Chef Denny. I had the pleasure of sampling this tempting baked roll of crab, octopus, scallions, and just a touch of spicy sauce, all wrapped in white fish and topped with lemon and mayo. It arrived with a very colorful presentation including spicy sauce, wasabi sauce, and spicy mayo sauce, so that you can sample one sauce at a time or be experimental and try all three.

Another popular cooked roll is the Stone-Crab Roll. Always made with fresh crab, it’s perfectly scrumptious. Tony recommends this as an excellent “starter” roll for those new to the exotic world of sushi.

Another famous chef roll is the Mike Roll. This is made up of lobster, crab, and cucumber with fried fish on the outside, accompanied by an eel sauce. Tempura flakes are sprinkled on top for a crunchy texture.

Those who like hot foods should try the Spicy New York Roll. This roll lives up to its name and contains three different types of fiery sauces packed with flavor.

There are plenty of other dining options as well. The chefs can make up veggie rolls using ingredients like Japanese squash and Japanese pickles. And for all of you low-carb dieters, don’t think for a second that you have to stay away from sushi. Tony’s offers many Atkins-friendly rolls and sashimi.

In fact, the best thing about sushi is that everything is made to order, so the chefs can accommodate any special dietary need. Whether you’re looking for something that is fat-free, carb-free, or rice-free, Tony’s has it. They can make some delightfully refreshing rolls wrapped in cucumber with salmon, tuna, or crab. A favorite lighter roll is the KC Roll made with salmon, avocado, roe, and scallion, wrapped in paper-thin cucumber.

Tony’s is also famous for their Bento box lunches and appetizers of beef and tuna tataki; lightly fried tempura; and Kani-Su, crab, avocado, and roe wrapped in cucumbers and vinegar. Other tasty appetizers include Gyoza, pastries filled with seasoned pork served steamed or fried with a spicy dipping sauce, and Shrimp Shumai, either steamed or fried. Jade says their sautéed spinach is “to die for.”

For the “less adventurous” or for sushi “newbies” who fear the fish, ask for the steak or chicken roll. (Again, these are not found on the menu.) And for you country folk, ask for Tony’s Kentucky Roll, made with — you guessed it! — fried chicken. This roll combines fried chicken, asparagus, and spicy mayo, wrapped in bean curd skin. The Colonel himself would be proud of this concoction!

If you’re not interested in sushi, have a seat at the Japanese grill. This is an excellent place to come with a small group or the whole family. Tables accommodate eight to ten guests or, for larger groups, a table can be reserved for 15-20 guests with two chefs at your service. At the grill, talented chefs prepare fresh seafood, steak, and chicken before an eager audience.

Not only are the chefs skilled in preparing scrumptious meals, but they also provide entertainment for the whole family. Children love to participate in the Egg Flip, where they get to stand behind the grill with the chef as he demonstrates how to toss the egg up and split it open mid-air with a spatula. This is a trick that Tony says should not be tried at home. Children are also dazzled by the spectacular Onion Volcano.

Bring some friends to Tony’s for a fun birthday dinner and the staff will make it an event to remember, bringing out the gong, a special birthday hat, and your choice of tempura cheese cake or ice cream for dessert. You might even get your picture added to Tony’s Wall of Fame, or Wall of Shame, as assistant manager Alex jokingly refers to it.

Tony’s also has a full-liquor bar serving beer, wine, and Japanese imported beer and sake. The friendly bartender has some of his own tricks and can sometimes be caught juggling bottles, giving the grill chefs some competition.

Aside from the spectacular food, what really sets Tony’s Sushi apart from other Japanese restaurants is its loyal customers. Tony stresses that he wants you to come in and feel comfortable, like you’re part of a family. In fact, many patrons are on a first-name basis and the servers often know what specials customers want before they even place their order. In fact, during a recent lunch outing, I witnessed this first hand.

When the server spots a regular diner, they will often arrive at the table with a special set of chopsticks reserved just for that customer. That’s right! Once Tony and the staff recognize you as a regular, you might be presented with your own personal set of chopsticks in their own special box. You then personalize your box and when you finish dining, the chopsticks are washed and placed in a rack on the ever-expanding wall where they will wait for your next visit. Some guests have even earned an exclusive set of chopsticks that are stored in a secret place under the counter.

Tony said that once one of their regulars caught a fish and brought it in for Tony to prepare. “Whatever you require, whatever you like,” he offers, “we can do anything you want.”

You can’t ask for much more than that.