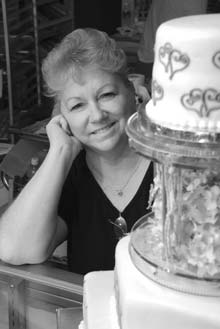 Pam Greenwell, a mother of two girls and a former paralegal, had always considered herself a frustrated artist. Her interest in baking began in her teens when she would peruse her mother’s cake decorating books and wonder if she could ever build the creations she saw on their pages. She grew up, married, and had children, channeling her creativity through their birthday cakes.

“I really think this is how most people get started in this field,” she says.

While surfing online in 1997, she came across information on a cake convention being held in Orlando. Pam arranged to attend, and the rest, as they say, is history.

Now a professional cake designer, Pam is a member of the Confectionery Artists Guild of Orlando and the Florida International Cake Exploration Societe. Pam credits the monthly meetings with training her on the latest techniques and feeding of her creativity. Creative and well-trained you’ll agree, especially after viewing her cakes. Pam has even caught the attention of Hollywood. Several notable celebrities have indulged in her cakes. Pam created a 50th anniversary cake for Oakland Raiders (and Ocala native) Daunte Culpepper’s family and has baked birthday cakes for John Travolta’s children. She also teaches cake decorating at local craft stores and was once the pastry chef at the Copper Pot. Currently, Pam works out of a bakery in the Shores Plaza called CJ’s Bakery & Sweets, and is a member of the Celebrations group of wedding and event professionals.

“A friend of mine always swore that some day she was going to buy a bakery,” Pam says. “A few years after she said that, she gave me a call asking me if I’d like to come on board.”

That friend is Cynthia Johnson, who bought the bakery with her husband, Jeffery.

“Pam was the first one I thought of when we bought the bakery,” says Cynthia. “I decorate birthday cakes and Pam does all the wedding and specialty cakes. We help each other out.”

Pam takes pride in the fact that her cakes are usually 99 percent, if not completely, edible. She doesn’t use foam core board and only uses gumpaste or pastillage (an edible sugar dough) sparingly. Instead, she works with edible (and tasty) ingredients to create realistic detail on her cakes.

One of the wildest cakes Pam ever made was a turkey. It was the bride’s gift to the groom, who belonged to a hunting club. The problem was, no one at the wedding regarded it as a cake. They thought it was a centerpiece. 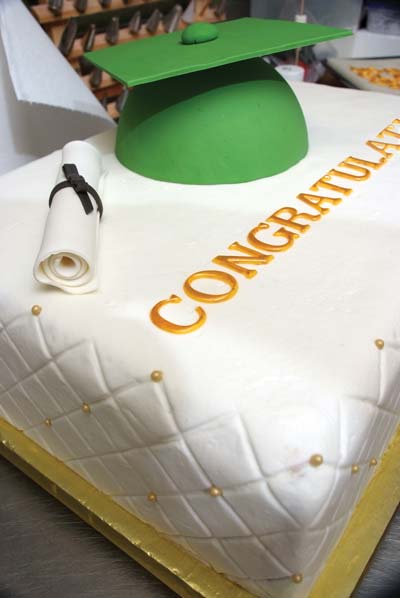 “Except for the skewers that supported them, even the feathers were edible,” Pam says. To create the masterpiece, Pam airbrushed wafer paper to simulate the tail feathers as well as the body. The final product was astounding.

Another interesting cake in Pam’s portfolio is a recreation of the Vatican, complete with columns, arches, windows, railings, and a steeple. The cake was created for a priest’s ordination at Blessed Trinity. For pet lovers, she made a cake with a picture of their two dogs framed in dog prints on top and a gumpaste dog collar around the cake. She can make shower or wedding cakes appear as gift boxes piled on top of each other, and lighthouse cakes come complete with a real light at the top. Do you want your cake to look like it’s made of broken mosaic tile or spotted all over like a cheetah? Pam has done that, too. And nothing is more fun than to have a cake “stump” made for any couple with their names engraved inside a heart in the “bark.” Pam’s creativity is only limited by her client’s imagination.

Sherry Rinfret and daughter Heather Sprano are two of her many satisfied customers.

“My daughter found Pam for her wedding and the cake was outstanding,” Sherry says. “Heather recently had a baby shower and Pam matched the colors of her invitations and napkins on to the cake. Not only was the cake gorgeous, but it was absolutely delicious.”