A hidden masterpiece of botanical delights awaits discovery in Williston with lakes, lush gardens and wildlife.

If your doctor could write a prescription for “soul refreshment, relaxation and de-stressing,” he would scribble an address and send you to Cedar Lakes Woods and Gardens for a morning or afternoon.

Nothing less than an enchanted hideaway, this unexpected gem of nature is tucked along a quiet road barely a half-mile off U.S. Highway 27, just west of the town of Williston. A labor of love created over decades by local endodontist Ray Webber, Cedar Lakes Woods and Gardens offers a remarkable invitation to explore a slice of heaven on earth.

And to think, it all started because Webber loved to fish.

Early in the last century, Florida road construction companies began using limestone to build the state’s highways. This sedimentary rock abounds in a swath that stretches from the Panhandle down through the north-central part of Florida—including much of Marion County—and parts of the west coast.

Nearly a dozen limestone mines were operating by the 1930s. Although some mines are still in existence across the state, there are a number of abandoned quarries, such as the one Webber purchased in 1991. The 100-year-old limestone mine was responsible for some of the materials used in paving nearby Highway 27. But the 110-acre property he bought nearly 30 years ago in no way resembled the botanical paradise of today.

“The pond then was really a swamp; we had to use machinery to dig it out,” relates Webber, whose original goal was simply to make a place where he and friends could fish. 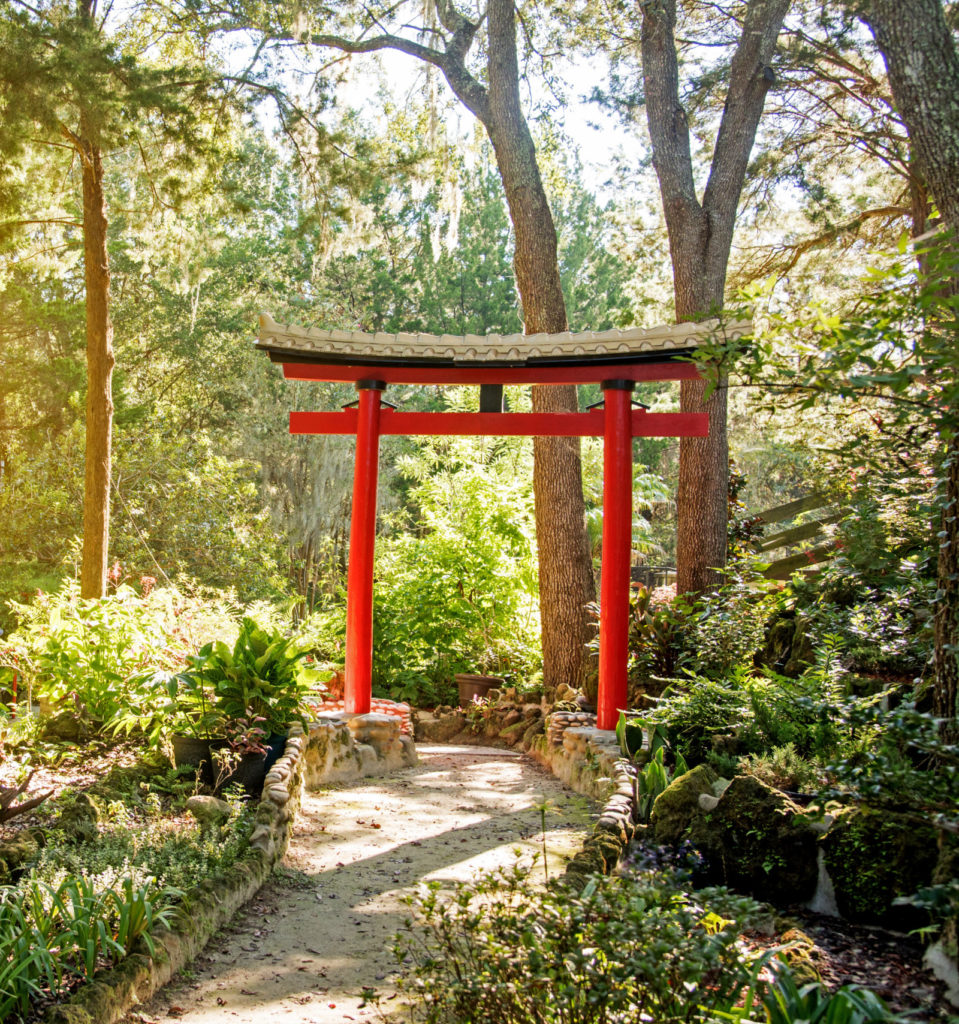 No one kept a tally, so there’s no way of knowing exactly how many loads of dirt and limestone were excavated. Gradually the swamp disappeared and in its place the garden’s ponds were created. Webber had the crews leave “islands” of limestone, which were reinforced with concrete. Narrow bridges were built between these islands and the “mainland,” connecting them with paths at different levels that meandered around the water.

Webber’s initial plan was to build low cement walls farther up the sides of the surrounding hills and cliffs to keep dirt and tree debris from making its way into the ponds. It made sense to add plants along the walls and the gardening project expanded from there.

The gently winding pathways are lined with Florida fieldstone set in concrete to hold the sloping banks and planted areas in place. These stones didn’t come from the quarry, but were initially collected from the surrounding woods and then from neighboring landowners. Brought in one wheelbarrow at a time, each stone was carefully placed by hand.

At the same time the ponds and gardens were created, Webber’s own house was built so one side of his home and the entire porch are literally perched on the edge of a cliff. When Webber eventually made the decision to open the property to the public, he was essentially inviting people into his backyard.

Work on the project began in 1993 and the largest portion of construction was completed in 2010, although it remains ongoing. The gardens and ponds cover about 20 acres, all of which are open to guests to explore. Walking paths total about one mile. Webber maintains the property with three full-time staff, and five part-time workers including manager Lori Wallace.

Originally from Oklahoma, Webber came to Florida in 1977 right after he got out of the U.S. Army. He taught dentistry at the University of Florida for five years before opening his own endodontistry practice in Ocala and Williston.

Starting with his time in the Army and continuing through the present, Webber’s passport has gotten a workout. From Europe, Russia and Scandinavia to South and Central America, he has traveled extensively. Asia, in particular, made a lasting impression. From the hand-carved wooden torii gate, similar to those found on Japanese temple grounds, to gracefully arched bridges and pagoda-like structures, Japanese influence is evident in the architecture and design throughout his gardens, thanks to Joel Schwiebert’s carpentry talent over more than two decades. 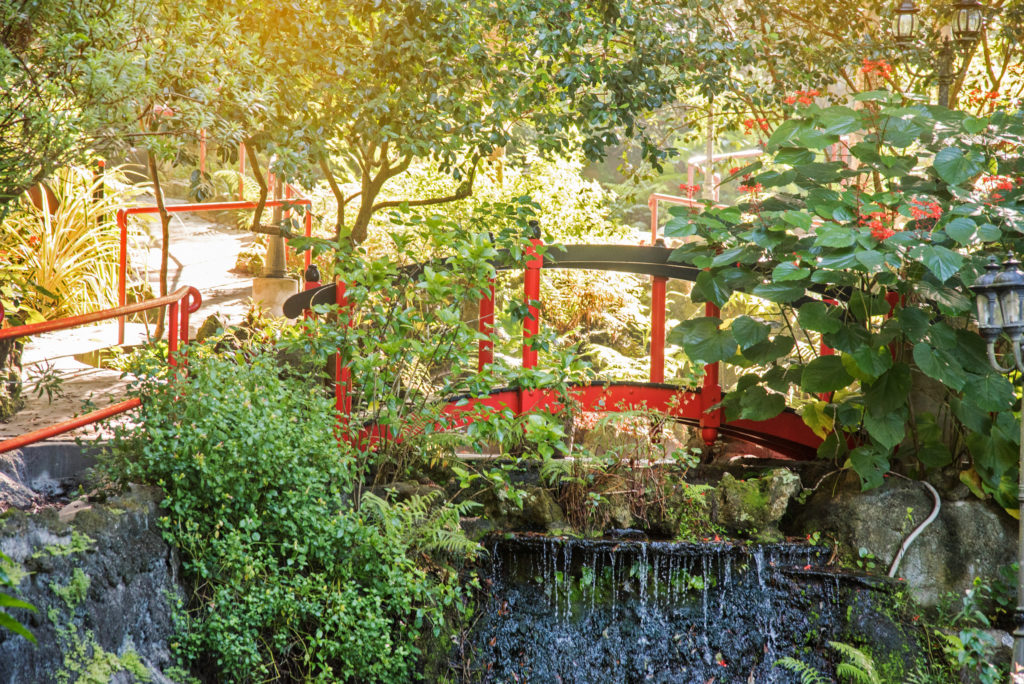 This influence even extends to the ponds, where magnificent Japanese koi swim, sunlight glinting off their bright bodies. They are joined by bass, brim and blue catfish, including one gargantuan catfish known as Big Ben, who weighs more than 100 pounds. Guests often spot Guinevere the swan and Olyvia the duck paddling about; the two widowed fowl have bonded since the passing of their respective mates.

The sheer variety of plants in this magical setting is staggering. Along with the more traditional azaleas, camellias, roses, bougainvilleas, palms, and cypress, there are a host of unusual flora, including the Parlor Maple with its impressive dangling orange blossoms, various orchids, ferns, water lilies and a number of different ginger plants.

Tiny markers announce the names of plants along the paths, but you don’t have to remember the official names to be mesmerized by their beauty. Webber has chosen most of the plants himself, and says much of his planting has been “trial and error.”

There’s a 144-year-old bonsai boxwood whose size far eclipses that of the typical bonsai tree. If you happen to wander into the Orchard Garden when the trees are blooming, you’ll be captivated by the aroma. Here, an inviting array of trees, including Satsuma tangerine, lemon, pear and even banana, are strategically planted, plus many “David Austin” roses.

Don’t ask Webber to pick one favorite plant. That’s impossible. There are too many to choose just one, but a few he’s quite fond of include the Hong Kong orchid trees, the lightbulb clerodendrum and lipstick plants, with their bright red flowers that bloom in fall, as well as the stunning red tree-sized bottlebrushes. He even imported some ginger plants from Hawaii that have flourished in the Florida environment.

Butterflies are drawn to many of the flowering plants; depending on when you visit, you are bound to see a number of these delicate
winged residents.

Birdsong is a continual soundtrack in the gardens, thanks to the presence of a great variety of songbirds and doves. Majestic birds of prey such as various hawks, swallow-tailed kites and owls also make their home in the area.

Word of mouth is how many guests first discover Cedar Lakes Woods and Gardens.

“I just love seeing all the Florida plants and the waterfalls,” says Gainesville resident Kathy Post. A repeat guest, Post first heard about the haven from a friend. Now it’s Post who’s bringing friends to explore this piece of paradise.

When guests stop by the office to pay admission, they’re handed a laminated map for their self-guided tour.

Young visitors are encouraged to take a few minutes exploring the winding paths of the Kids’ Garden. The trail wanders over a tiny bridge and meanders around a charming fairy village. Children love the fact that there’s something to discover around each corner: a hidden animal statue here, a little gnome there. 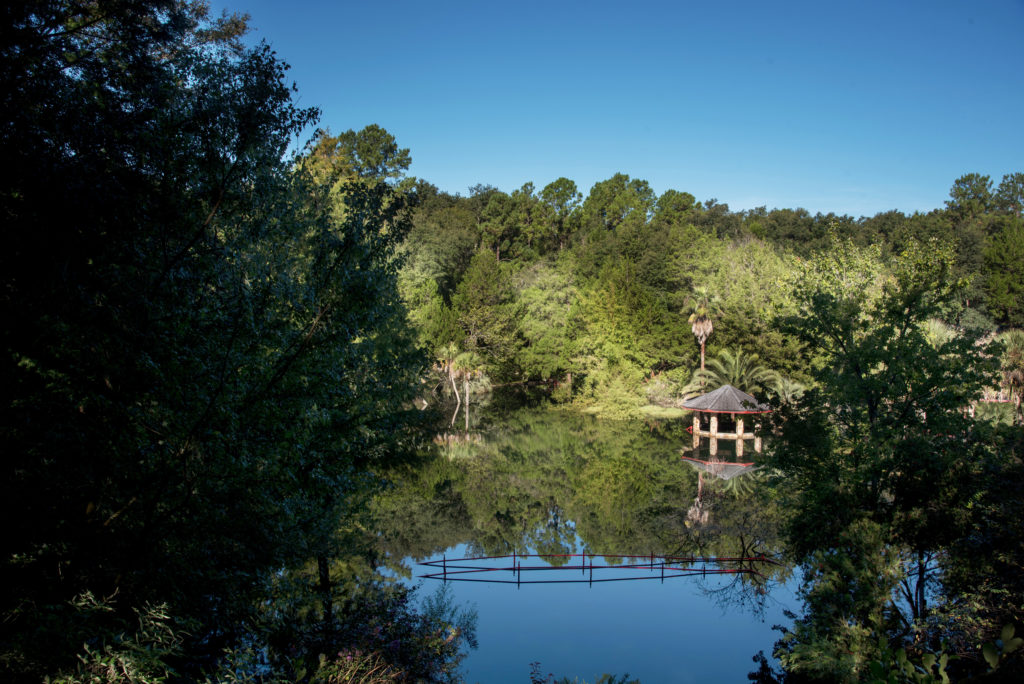 Kids and adults alike appreciate the four-legged residents at the tortoise enclosure. “Spurticus,” an African spurred tortoise, also known as a sulcata tortoise, weighs more than 50 pounds. Native to the Sahara desert, this is the largest species of mainland tortoise. In the neighboring enclosure, four African leopard tortoises roam about and happily munch on fresh veggies. Webber had tortoise houses built, complete with weather flaps that keep warm air in, to protect these hot-climate reptiles during cold spells.

Throughout the gardens, benches and picnic tables offer an invitation to sit for a moment—or as long as you care to linger. Guests often pack a lunch to enjoy at one of these tucked-away tables, some with a waterfall in the immediate background.

At the aptly named Lookout Point, the highest elevation of all the gardens, you’ll find stunning panoramic views. On breezy days, a resonant chorus echoes from the large wind chimes hanging here.

If the giant wooden birdhouse at Birdhouse Field reminds you of the English countryside, you’re on target as to its origins. Webber saw a similar birdhouse on one of his trips to England and, upon his return, recruited his carpenter to build a facsimile for his own gardens. With its many openings, the giant house welcomes avian inhabitants of differing sizes.

Some visiting guests realize this is the perfect place for a special event. Webber routinely rents the gardens for weddings, corporate retreats, birthday parties and reunions. After all, what better place to say “I do” than on one of the picturesque bridges with the gentle murmur of waterfalls in the background?

Adjacent to the gardens is a 64-acre conservation easement maintained by Conservation Florida. Populated with a variety of mature trees, including oaks (some of the live oaks are around 500 years old), pines, cedars, pecans, hickories and dogwoods, these woods are open for guests to walk through as part of their visit.

Last year, more than 22,500 people visited Cedar Lakes Woods and Gardens, a huge increase from the 785 people who came in 2014, the first year it opened to the public.

In 2015, the garden launched its inaugural Garden Show and Spring Festival, a two-day event that takes place on the first weekend each May. This annual festival features an array of vendors—everything from plants to arts and crafts, plus a variety of food trucks. And of course, admission includes touring the gardens.

“We’re always working on it; we add to it every month. There’s still a long ways to go before we’re ‘done,’” says Webber with a smile. “The hope is that it’s here for generations to come; that’s the whole reason I made it a nonprofit.”

Beyond new plants, which are constantly being added, Webber wants to build an aviary near the tortoise enclosure. He also envisions having a welcome center.

Unlike many Florida attractions, there is nothing commercial or “touristy” about Cedar Lakes Woods and Gardens. Sure, you can buy a T-shirt to commemorate your visit, and the restrooms are immaculate, but you won’t find a large gift shop or bustling food court. You can’t rent a scooter or hop on an elevated train. Nature itself is the star here and Webber sees no reason to compete with that.

There’s a reassuring sense of uncomplicatedness to this pristine corner of natural Florida. Your visit to this enchanted garden is all about exploring at your own pace and reveling in the sights, sounds and scents that envelope your journey of discovery.

Cedar Lakes Woods and Gardens is open 9:30am-5:00pm every day except Wednesdays. Groups of 10 or more are invited to call and arrange for guided tours. Sneakers or similar footwear with non-slip soles are recommended. Leashed pets are welcome.