Lavelle Rixie is doing what 53 percent of American adults say they want to do: work after retirement.

Lavelle, 53, a former management trainer and phone company executive, is now an EMT and attending school to become a paramedic. He’s part of a growing group of retirees who believes that contributing to society is an important element in a second career.

Civic Ventures, an organization founded by social entrepreneur and author Marc Freedman, conducted a “New Face of Work Survey,” which found that 65 percent of Americans plan to continue working after retirement, and that new work will include helping others. The top three choices for second careers included education, social services, and retail, with healthcare coming in a close fourth. Most Americans surveyed believe that when they retire at age 65, they will still have 20 good years to give to an “encore” career, a term coined by Freedman. 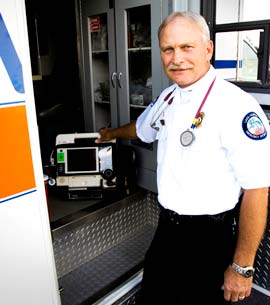 ‘My job ceased to exist’

Lavelle has both a bachelor’s and a master’s degree from the University of Florida. He began his career as a teacher and coach at Tavares High School. He enjoyed the work, but like most Baby Boomers, he aspired for more in terms of career advancement and income. He left teaching and joined the Florida Telephone Company, which went through a series of buyouts and is now Embarq.

He eventually advanced to head the Public Access Department, which oversaw the use and distribution of pay phones.

He left in 1999 and went to work with a pay phone distributor in Lakeland, but it was apparent the distributor needed to pursue foreign markets.

“Pay phones are still very important in Egypt, Australia, and places like China, where cell phones aren’t as popular,” he says. “The distributor wanted me to start traveling abroad.”

At the time, Lavelle’s daughter was 12, and his wife, who continued to work for Embarq, was on the fast track for career advancement. The couple decided Lavelle should retire.

“I knew there was no way I could just do nothing,” Lavelle says. “I had to do something to contribute.”

After studying what was available and basically finding most companies weren’t interested in executives over 50, Lavelle decided to try EMT training, which he describes as fascinating.

“I was with a bunch of high school kids and they called me the old man,” he remembers. “As soon as I got out, I was hired at Lake Sumter-EMS.”

He was attracted to the EMT job because the flexible work schedule of one day on and two days off allowed him to be at home with his daughter more.

Just as important to Lavelle is the feeling that his work is appreciated.

“It really does make you feel good when the patients and families tell you you’ve made a difference for them,” Lavelle says. “That’s very gratifying.” 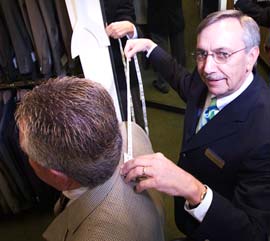 Tom Laubach, a former hospital administrator in Chicago and New York, says retail is a way for him to stay in touch with people. He and his wife, Maureen, live in Summerfield.

“I’m not a golfer, so when I first retired, I sold furniture for a while,” Tom remembers.

He also got a real estate license, but after the market fizzled he went to work at Jos. A. Banks in The Villages.

Tom is not alone as many retirees enjoy the retail industry because of the flexibility and being able to work with products that interest them.

“I enjoy being around people,” Tom says. “In a hospital background, the patient always came first, so having that background makes it’s easy for me to be customer-service oriented.”

Tom’s wife still works full-time, which is another reason he looks forward to getting out of the house for a few hours a week.

“I really enjoy working in the retail market,” he says. “And I meet a lot of very nice people in this job.” 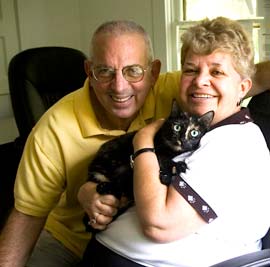 Maureen Curley left New Jersey and a lucrative career in banking to move to The Villages in 2000 for less stress and warmer weather. She and her husband, Howard, knew they would have to find jobs, but the lifestyle was appealing enough that they were ready to make career changes.

Maureen began working full time for Adept Community Services in Wildwood shortly after moving to The Villages. As she approaches 60 in a few weeks, she’s found yet another career—one that has already offered immense satisfaction and joy. She and Howard are cat sitters, and it’s a job they hope to continue long after they are officially retired.

“It started simply enough. We agreed to cat-sit for a friend who was going away for an extended period,” Maureen says. “Next thing we know, other people were asking us to care for their cats.”

Seeing the opportunity for pleasurable part-time work, the cat lover advertised to get new clients. She also got bonded and insured so that clients would be comfortable having her enter their homes when they were away.

“Now we don’t have to advertise at all,” Maureen says. “Everything we get is word-of-mouth. I make it a very personal service.”

Howard, a former warehouse manager in New Jersey, now enjoys working for Kirkland’s in The Villages. He also helps Maureen with cat duty when their schedules get hectic, especially during holidays when so many people travel.

And cat owners love her personal attention, not only to their beloved pets but also to them.

“I e-mail my clients to let them know how their pet is doing while they’re away,” says Maureen. “It’s a comfort for them and little or no effort for me.”

Maureen loves cats so much she now has adopted one who has joined the staff at Adept Community Services. He perches on a filing cabinet while the staff works around him.

The cat-sitting service gives Maureen and Howard a chance to enjoy cats and have the steady income they feel they’ll need after retirement.

What you need to know:

Doug Heinlen, an AARP volunteer who represents Florida on the AARP Executive Committee, says retirees and older employees should focus on three key issues to when returning to the workforce.

1. “First, know your rights if you are being forced out,” he says. “AARP provides advocacy and protection for older workers.” When there is a case of clear age discrimination, AARP will act as an advocate and has even engaged in legal battles to protect the rights of older workers.

2. He also encourages older workers to understand their real value as employees. AARP works to educate employers about the benefits of hiring this segment of the population. “As a rule, older workers are very loyal, have strong work ethics, and show up for work regularly,” he says. “They also enjoy being mentors to younger employees.”

3. Finally, Doug strongly recommends that retirees keep their skills up-to-date and remain knowledgeable about the marketplace. If it’s been awhile since you’ve interviewed or have been in the job market, know what kinds of resumes are currently wanted and the proper way to act during a job interview.